Accessibility links
High-End Burger Joints Raise The Stakes The fastest growing restaurant chain in the country is a hamburger eatery called Five Guys. Along with restaurants like Elevation Burger and Ray's Hell Burger, it offers fresh, steakhouse-quality beef — and is leading a revolution that's making the bigger chains take notice. 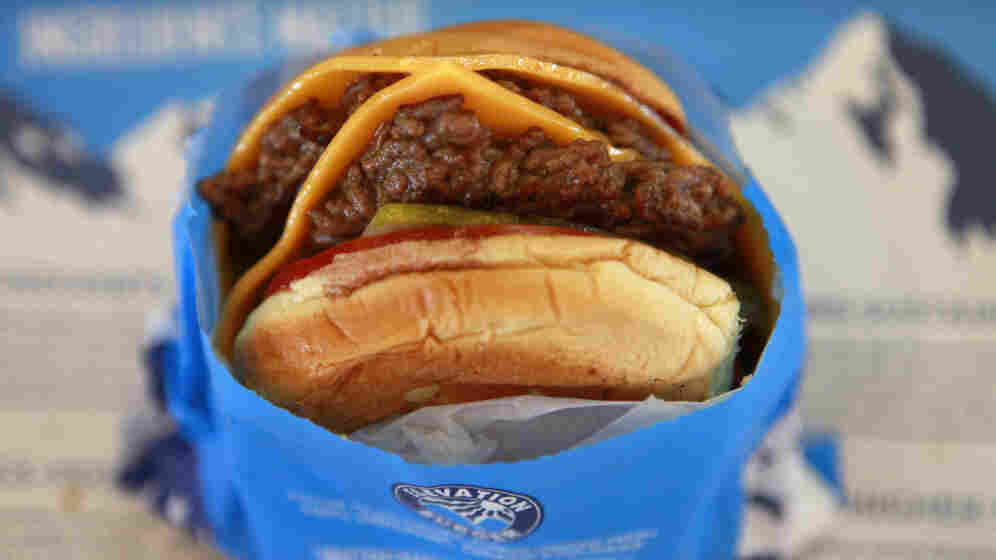 If you're not aware of Five Guys Burgers and Fries yet, just wait — you probably will be. It's the fastest growing restaurant chain in the country, and it's leading a burger revolution that's making the bigger chains take notice. 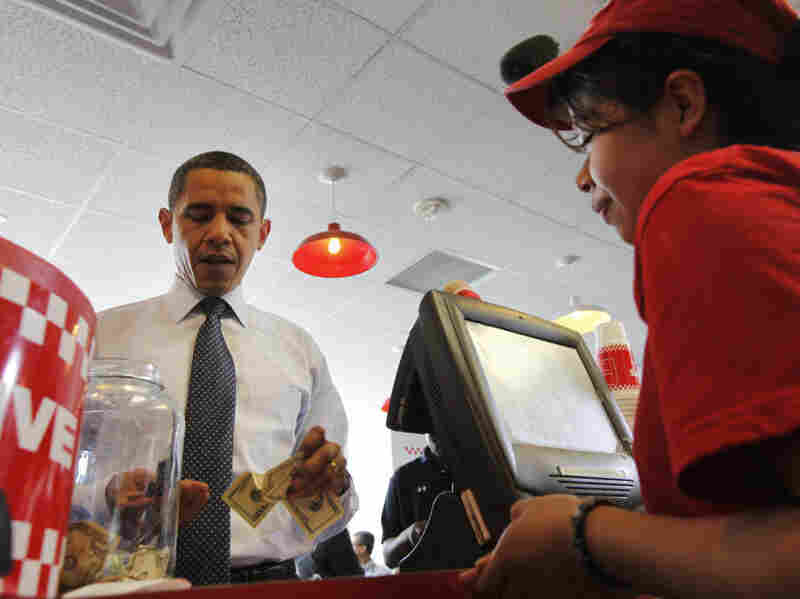 Count President Obama as a fan of Five Guys. In May 2009, the president ordered a hamburger at a Five Guys restaurant in Washington. Gerald Herbert/AP hide caption 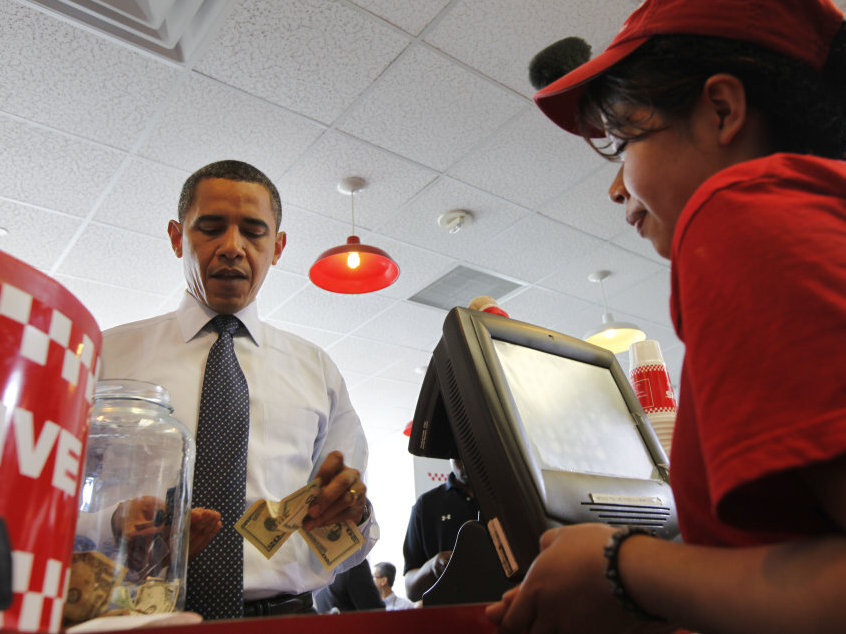 Count President Obama as a fan of Five Guys. In May 2009, the president ordered a hamburger at a Five Guys restaurant in Washington.

CEO Jerry Murrell doesn't shy away from the fact that his restaurant isn't a typical burger joint.

"We put a sign up in our stores when we first opened up, and the sign said, 'If you're in a hurry, there are a lot of other really good burger places real close to here,' " he says. "It was real in-your-face."

You can grab a McDouble for a buck over at the Golden Arches almost as fast as you can order it. On average, customers at Five Guys wait 5 to 10 minutes for their double burger, which costs around $4.50.

"We're just trying to cook a burger like a mom-and-pop burger," Murrell says.

But unlike Mom and Pop, Five Guys operates on a much larger scale. In 2003, Murrell, his wife and three sons decided that Five Guys, best known for its hand-cut fries and fresh beef, was ready to go national. The franchise took off.

To date, it has more than 700 locations. And according to Technomic, a Chicago-based restaurant consulting firm, the chain shows no signs of slowing.

"We expect it to continue for at least the next three to five years," says Darren Tristano, an executive vice president with Technomic. He says the chain will "continue to compete aggressively both with casual dining chains like Applebee's and Chili's, as well as McDonald's, Wendy's and Burger King."

It's a comfort food to many people, [but] it's still not an expensive product. So if you would've purchased a steak but you still want beef, a good quality burger is a nice alternative.

Tristano says the rapid growth of Five Guys and other high-end burger joints might in part be explained by the recession.

"The gourmet market has really come out of this rebirth of the burger," he says. "The reason is that it's a comfort food to many people, [but] it's still not an expensive product. So if you would've purchased a steak but you still want beef, a good quality burger is a nice alternative."

There has also been a shift in consumer preferences.

Hans Hess got into the burger business with lofty ideals and gave his restaurant a lofty name — Elevation Burger, which strictly uses free-range, grass-fed, organic beef.

"We're doing it better," he says. "We're bringing it up, we're raising the standard."

Since 2005, he has been able to open 18 franchises from New York to Dallas, with another 100 in development in the U.S. and a few in the Middle East. Hess says despite all of his hard work building a supply chain for organic meat, he wins over most customers through their taste buds.

"One of the great things about grass-fed, organic [beef] is that it actually tastes better," he says. "It has its own complex flavor profile."

'You Wouldn't Add Grape Juice To Your Dom Perignon'

"I have a problem in general when people take foods that were invented to take low-grade ingredients and make them more palatable, and then they try to take that food and somehow make it high-end," he says. "You know, you wouldn't add grape juice to your Dom Perignon." 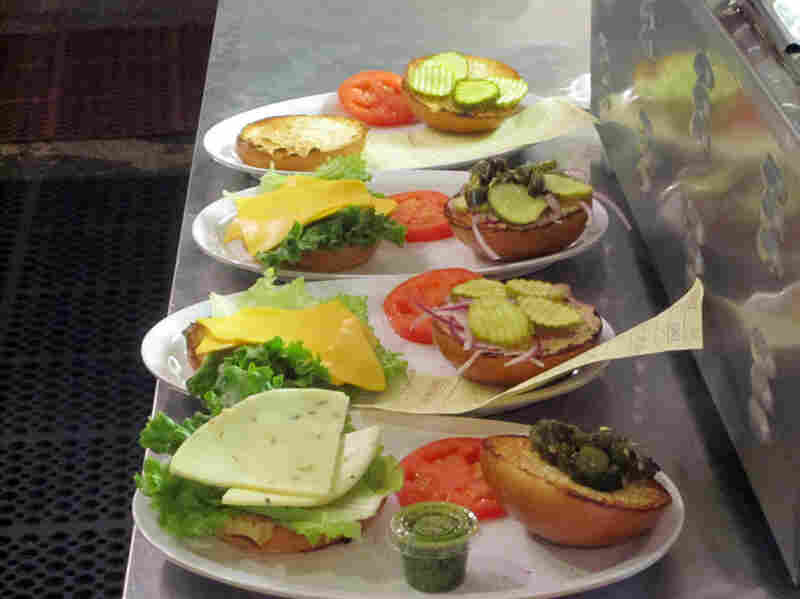 At Ray's Hell Burger in Arlington, Va., burgers are made to order — and can cost up to $18 each. Owner Michael Landrum says he thinks of them not as expensive burgers, but as inexpensive steaks. Rob Sachs/for NPR hide caption

Don't tell that to Michael Landrum over at Ray's Hell Burger in Arlington, Va. There, you can purchase a steakhouse-quality burger for less than $10, and an $18 burger. "But that includes a nice, thick slice of seared foie gras on top," he says.

Rather than being an expensive burger, Landrum says, his product is more of an inexpensive steak. He integrates scraps of filet mignon and New York strip into his patties.

Tristano says the big players are taking notice of the premium trend. "McDonald's, Wendy's and Burger King have had to shift to higher quality burgers — whether it's a steakhouse burger, the angus burger, or if it's sirloin, it has to move to remain competitive."

The strategy of switching to higher quality seems to be paying off. Wendy's says french fry sales were up 16 percent in December, when the chain began a publicity campaign for its new natural-cut sea-salt fries. Wendy's plans to roll out a line of deluxe burgers in the fall.