Accessibility links
New Republic: Eco-Movement Faces A Hostile Climate Friday is Earth Day, but some environmental activists may feel like the climate change fight has dwindled. Bradford Plumer of The New Republic takes a look into why the green movement has been struggling, and argues that it still has a chance. 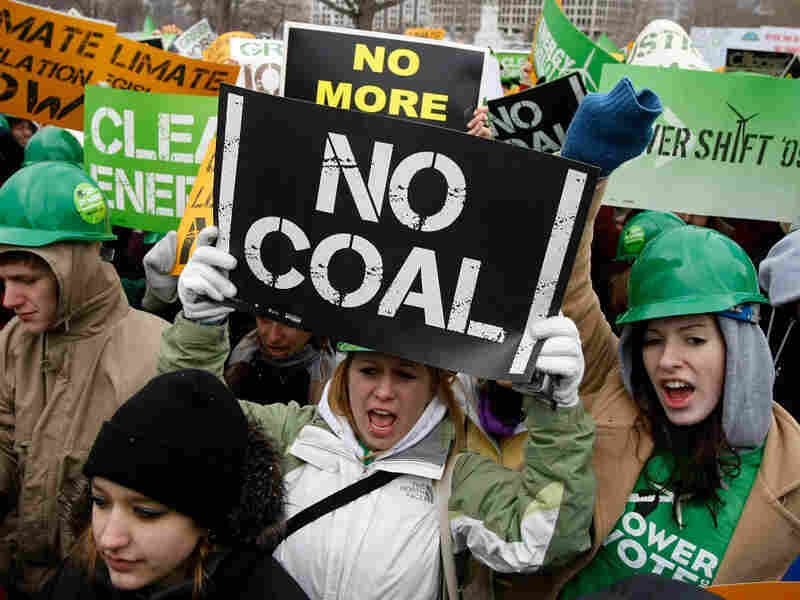 Activists hold signs as they participate in the Power Shift '09 rally in Washington, D.C., to call for urgent congressional actions on climate change, energy and the economy. Alex Wong/Getty Images hide caption 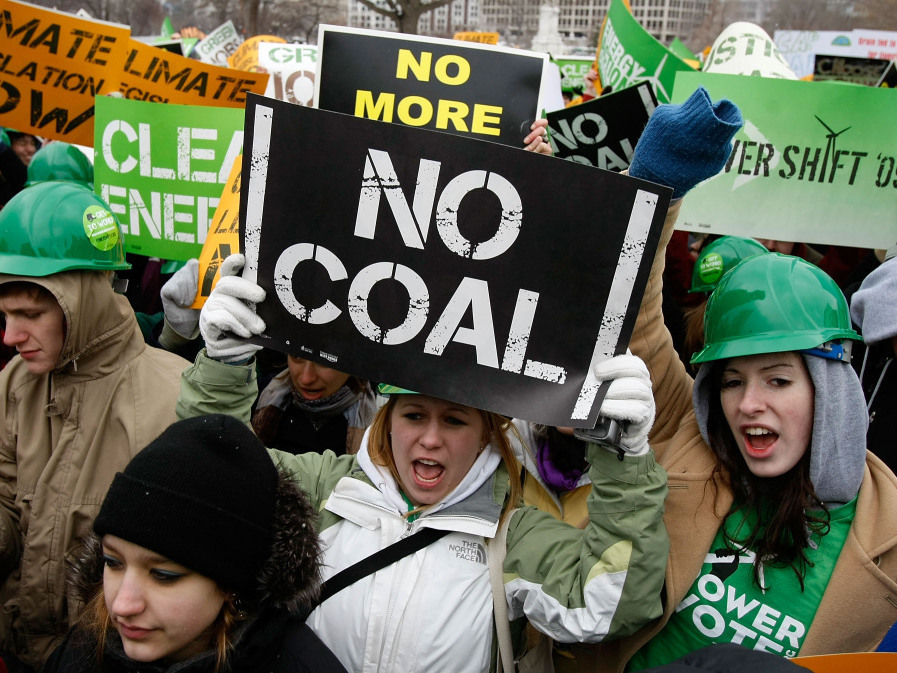 Activists hold signs as they participate in the Power Shift '09 rally in Washington, D.C., to call for urgent congressional actions on climate change, energy and the economy.

Bradford Plumer is the associate editor for The New Republic.

What went wrong? For months now, environmentalists have been asking themselves that question, and it's easy to see why. After Barack Obama vaulted into the White House in 2008, it really did look like the United States was, at long last, going to do something about global warming. Scientists were united on the causes and perils of climate change. Al Gore's An Inconvenient Truth had stoked public concern. Green groups in D.C. had rallied around a consensus solution — a cap-and-trade program for carbon emissions — and had garnered support from a few major companies like BP and Duke Energy. Both Obama and his opponent, John McCain, were on board. And, so, environmental advocates prepared a frontal assault on Congress. May as well order the victory confetti, right?

Instead, the climate push was ... a total flop. By late 2010, the main cap-and-trade bill had fizzled out in the Senate; not a single Republican would agree to vote for it. Greens ended up winning zilch from Congress, not even minor legislation to boost renewable electricity or energy efficiency. Worse, after the 2010 midterms, the House GOP became overrun with climate deniers, while voters turned apathetic about global warming. All those flashy eco-ads and all that tireless eco-lobbying only got us even further from solving climate change than we were in 2008.

So now greens are in the post-mortem stage, and, not shockingly, it's a sensitive subject. On Tuesday, Matthew Nisbet, a communications professor at American University, released a hefty 84-page report trying to figure out why climate activism flopped so miserably in the past few years. Nisbet's report is already causing controversy: Among other things, he argues that, contrary to popular belief, greens weren't badly outspent by industry groups and that media coverage of climate science wasn't really a problem. And he raises questions about whether greens have been backing the wrong policy measures all along. Is he right? Have environmentalists been fundamentally misguided all this while? Or were they just unlucky?

Just about everyone in the green movement has a theory for why the climate fight sputtered out. Some activists blame their all-too-powerful foes. The oil and coal industries, as well as groups like the National Association of Manufacturers, all vehemently opposed cap-and-trade and shelled out millions lobbying Congress. The cranks who deny that global warming is manmade were way too effective at spreading their disinformation. And gullible reporters were too willing to give these skeptics airtime. Call this the "we were outgunned" theory. Bill McKibben, for one, has argued that enviros need to spend more time targeting the "the guys with the money who pull the strings," like the Chamber of Commerce and the Koch brothers. Some climate scientists, meanwhile, have argued that they need to get better at swatting down gibberish from the skeptics. Shortly after the midterms, some 40 climatologists around the world banded together to form a "rapid response unit" on key climate-science questions. (It's still too early to judge the end result.)

Then there are the lefty greens — groups like MoveOn.org and Friends of the Earth — who have long argued that the inside-the-Beltway strategy of 2009 and 2010 was inherently self-defeating. The mainstream green groups, these lefties argue, spent way too much time compromising with fossil-fuel interests in order to craft a byzantine cap-and-trade proposal that could placate enough swing voters in Congress. The end result was too loophole-ridden and too complicated to excite the base. Call this the "no one likes a sellout" theory — it's the idea that a simpler, stronger policy (say, a flat carbon tax), combined with fervent grassroots pressure, might have stood a better chance.

Plenty of other observers, meanwhile, have suggested that greens miscast the problem from the start. Mike Hulme, a climate scientist at the University of East Anglia, has argued that greens mistakenly treated global warming as a run-of-the-mill environmental problem similar to, say, acid rain. But, with acid rain, feasible solutions were already available — namely, scrubbers and low-sulfur coal — that made it relatively straightforward to cap sulfur-dioxide emissions. Climate change, Hulme argues, is a much trickier, more complicated problem that will require a flurry of different policy responses and society-wide changes, not just one big bill. Alternatively, Ted Nordhaus and Michael Shellenberger of the Breakthrough Institute have argued — in TNR and elsewhere — that a policy like cap-and-trade, which works by making dirty energy expensive, will never gain broad political support. Instead, environmental groups should have focused on pain-free policies to boost innovation and make clean energy cheaper — by, say, funding R&D on a Manhattan Project-esque scale.

Nisbet, for his part, seems to favor the third camp, those in support of the "we need bold new ideas" theory. He certainly doesn't believe greens were woefully outmatched by powerful fossil-fuel interests. In his report, Nisbet estimates that green groups and their allies spent $394 million on climate-change activities in 2009 — ads, organizing, lobbying — compared with just $259 million from conservative and industry groups. Nor does he think media-assisted denialism was a decisive factor. His research found that the biggest news outlets — The New York Times, The Washington Post, The Wall Street Journal, CNN, and Politico — tended to reflect mainstream climate science in their coverage. The implication, then, is that environmentalists have no one to blame but themselves for failing to sell their climate policies.

What's more, Nisbet argues that the climate cause was hurt by getting too wrapped up in partisan politics. Back in 2007, it wasn't a problem that Al Gore was the single figure most associated with raising awareness about global warming — after all, his erstwhile foe George W. Bush was wildly unpopular and Democrats were on the rise. But, Nisbet argues, the fact that tackling climate change became identified as a Democratic cause, in an era when Republicans have steadfastly opposed any and every Democratic position, ended up hurting the environmental movement.

These parts of Nisbet's report have attracted plenty of criticism. His media analysis, for one, ignores both cable television and the Internet, where all sorts of denialist nonsense can percolate. And Joseph Romm of the Center for American Progress has argued that Nisbet's analysis of interest-group spending is badly skewed — for instance, the report counts BP's entire lobbying budget on the green side of the ledger, even though BP lobbies on all sorts of issues and barely lifted a finger when it came to cap-and-trade. That said, Nisbet does seem to have a point here: Green groups do have vast resources at their disposal that they don't seem to be using effectively. As Grist's David Roberts recently argued, environmentalists might see better results by bankrolling a few successful primary challenges against teetering politicians than by running another round of stirring wind-turbine ads.

As for the bit about Al Gore, I'd frame the situation slightly differently. After Barack Obama got elected, every major policy issue became subject to trench warfare. The Affordable Care Act squeaked through the Senate without a single GOP vote. Financial regulation, which was overwhelmingly popular with the public, only barely wiggled through Congress. In this same vein, cap-and-trade passed the House but fell just short in the Senate (it might have garnered 51 votes, but it couldn't get the 60 required to overcome a filibuster). It seems misguided to suggest that climate change became a uniquely toxic policy issue, when the difference between it and health care or financial regulation amounted to a few measly votes. Under the circumstances, it's hard to see how any other approach — say, one centered around spending billions of dollars on energy innovation, or a big grassroots approach — would have been any more successful.

Read the rest of Bradford Plumer's article at The New Republic.