Accessibility links
One Marine's Journey: War, Activism, Then Tragedy Clay W. Hunt, 28, a decorated combat veteran in both Iraq and Afghanistan and an advocate for combat troops suffering from depression and post-traumatic stress disorder, killed himself in his apartment outside Houston last month. 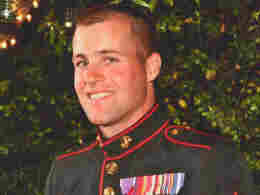 Clay W. Hunt decided halfway through college he wanted to be a Marine. He tested so well, the Marines wanted him to be an officer. But he wanted to serve in the infantry. Courtesy of Susan Selke and family hide caption

Growing up in Houston, Clay W. Hunt was the quintessential Texas kid. He was a good athlete, competitive. Hunt was friendly and nice-looking and the girls liked him.

"He just loved the outdoors, and he was a team sport kind of guy. He much preferred to be on a football and baseball team," says Susan Selke, Hunt's mother.

After high school Hunt went to college, but halfway through he decided he wanted to be a Marine. He tested so well, the Marines wanted him to be an officer. But Hunt declined — he wanted to be on the team.

He was infantry and happy.

Hunt was sent to Iraq, into the maw of Fallujah in 2007. In the first few weeks, his good friend and bunkmate, Blake Howey, was killed by a roadside bomb. Four weeks later, Hunt watched a second friend die 2 feet from him.

"Clay was driving a Humvee and this young man, Nathan Windsor, was walking along to the side talking to Clay. And a sniper just shot him through the throat," Selke says.

The patrol was pinned down by sniper fire and rocket-propelled grenades. Windsor died on a medevac helicopter; there was no saving him. When Hunt next talked to his parents, he was changed.

"[He] was very distraught that he couldn't get out of the Humvee to help, as he said, 'My man.' He was very shaken and it was obvious that the innocence was gone," Selke says. 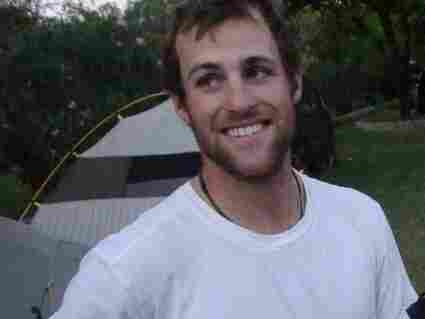 Hunt became an advocate for troops suffering from depression and post-traumatic stress disorder. He dealt with both himself. Courtesy of Team Rubicon hide caption

Three weeks later Hunt was on foot patrol as they moved through the city. He took a sniper round through his wrist, 2 inches from his face.

While recovering, Hunt was diagnosed with post-traumatic stress disorder and given medication. He remained undaunted. He went to scout sniper school, one of the most demanding training regimens the Marines offer, and he was sent to southern Afghanistan, the Sangin district.

"We were the first American units deployed to the Helmand valley," says Jake Wood, Hunt's fellow sniper and best friend. "We were there without air support, without tanks, without artillery. And we were surrounded by Taliban."

Hunt told his family that it was "a nasty tour" full of death. After finishing, he left the Marines decorated and honorably discharged.

Back in Texas, Hunt had trouble sleeping, and he struggled with depression. A couple of times he had panic attacks in public. Hunt had been taught by the Marines that he had no reason to feel ashamed of his PTSD, and he wasn't ashamed. He was well aware there were plenty of returning combat vets suffering just like him.

He even appeared in a video made by the Iraq and Afghanistan Veterans, part of a campaign to help ease the transition for soldiers from combat to civilian life.

His PTSD symptoms were unrelenting. Hunt seemed down but not out. His two-year marriage ended in divorce. He left college. But by this spring he'd found a job he liked, he got an apartment and in late March he bought a new pickup. Friends and family thought he was doing OK. And then suddenly, he went silent, no return calls, no text messages for two days.

Hunt had shot himself in his apartment outside Houston.

"I was surprised but not shocked," says Wood.

Hunt's parents don't blame the VA or the Marines for their son's suicide. But Wood says the federal government isn't doing enough.

"I think our government needs to re-evaluate what they're doing when they make warriors with such ease and send them to combat zones and then really don't have a plan to transition them when they come home. I think there needs to be a discussion at the top levels of government because it's a growing problem," he says.

Hunt's mother has many strong feelings about what happened to her son. Mostly she says she is so proud of him.

Hunt was cremated, and his ashes will be spread on his grandparents' ranch in East Texas where he loved to fish and hunt when he growing up.