Accessibility links
Trump Is Thinking About Presidential Bid ... Maybe Donald Trump keeps telling everyone he's thinking about running for president, and the polls will tell you that at least some voters are ready to take him seriously. But he's said this before. Is all of him running, or just his hype machine? 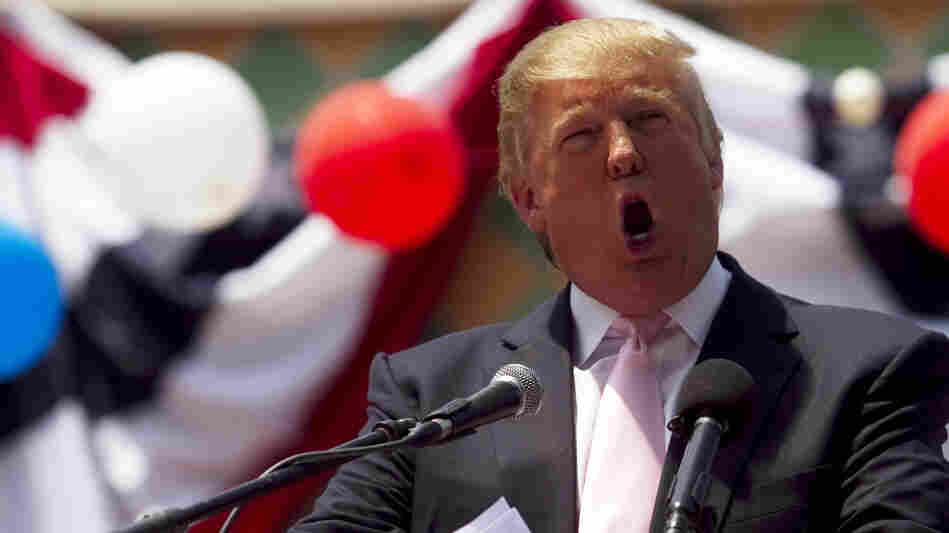 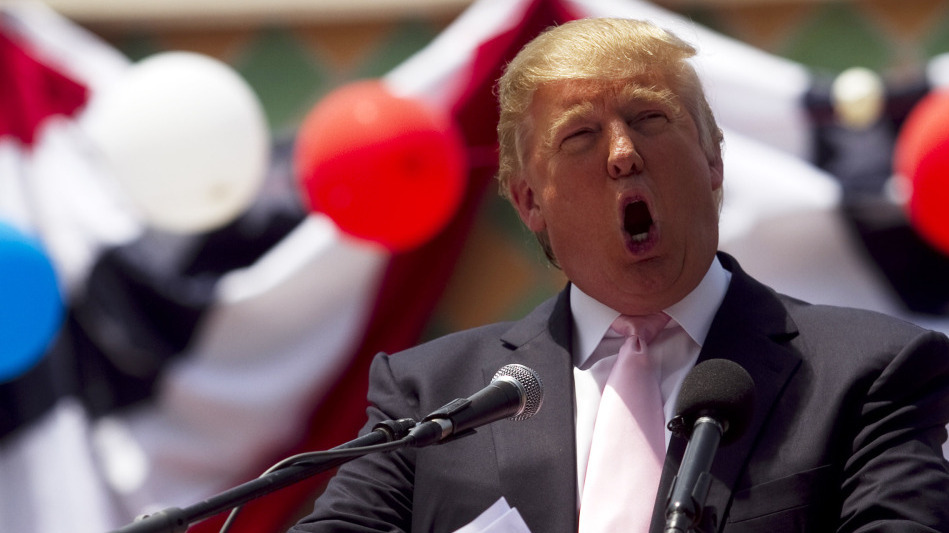 Donald Trump is making the rounds on TV and in key states to explain that he may — just possibly — be interested in running for president.

Many voters are taking his presidential aspirations seriously, but does Trump himself?

When Barack Obama, then a senator, ran for president the first time, Republicans took out ads calling him a celebrity. But Donald Trump doesn't run away from that epithet — he embraces it. One of his NBC TV shows is called Celebrity Apprentice, for crying out loud. And all the powerful, no-nonsense business acumen he brings to kicking actor Gary Busey off the show right in front of Meat Loaf, he says he'll bring to, say, conflicts with the Saudis over oil. As he recently told ABC News, it's "all about the messenger."

Ah yes ... the messenger. The developer has put together epic deals, but several of his companies have endured bankruptcy — the latest just two years ago — and he's a front man with just a slender stake in a significant number of the casinos and buildings that bear his name. This particular messenger is a showman at heart.

He's also flirted with politics before. Back on New Year's Eve 1999, Trump talked about the new millennium with NBC's Tom Brokaw, who asked him the seemingly unavoidable: Was he running for president? Trump told Brokaw that he was "looking at it seriously."

Would we take P.T. Barnum seriously if he wandered into a straw poll in Iowa? I turned to Jonathan Weisman, a veteran political reporter for The Wall Street Journal, for guidance. Weisman pointed me to polls showing Trump toward the front of the Republican pack. He reminded me that it's for the voters to decide whom to take seriously, and that in New Hampshire and Iowa, his candidacy is no joke among party activists most likely to vote in caucuses and primaries. 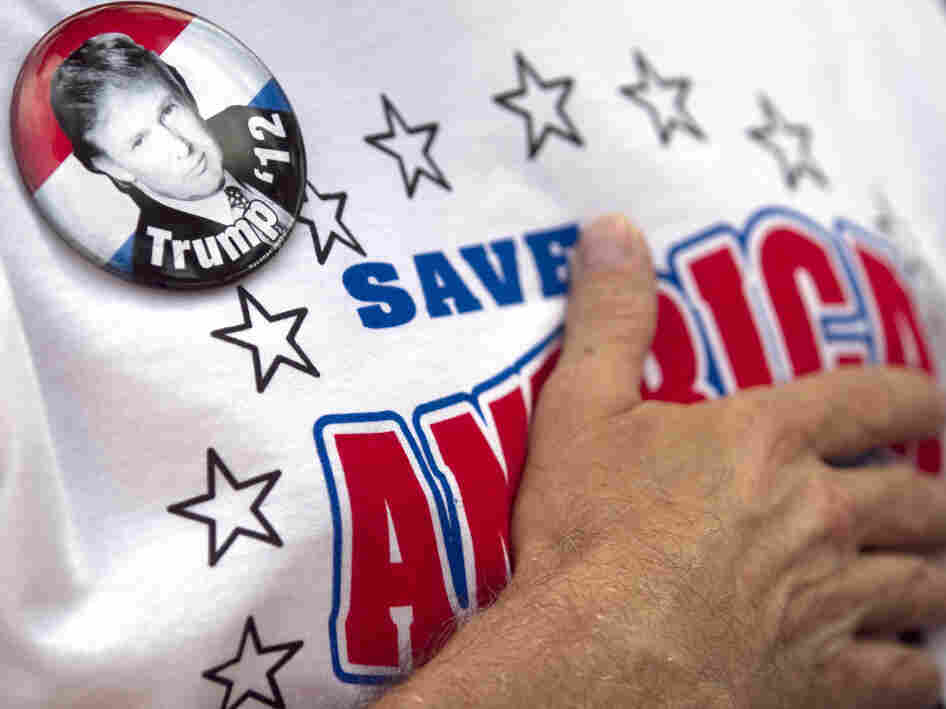 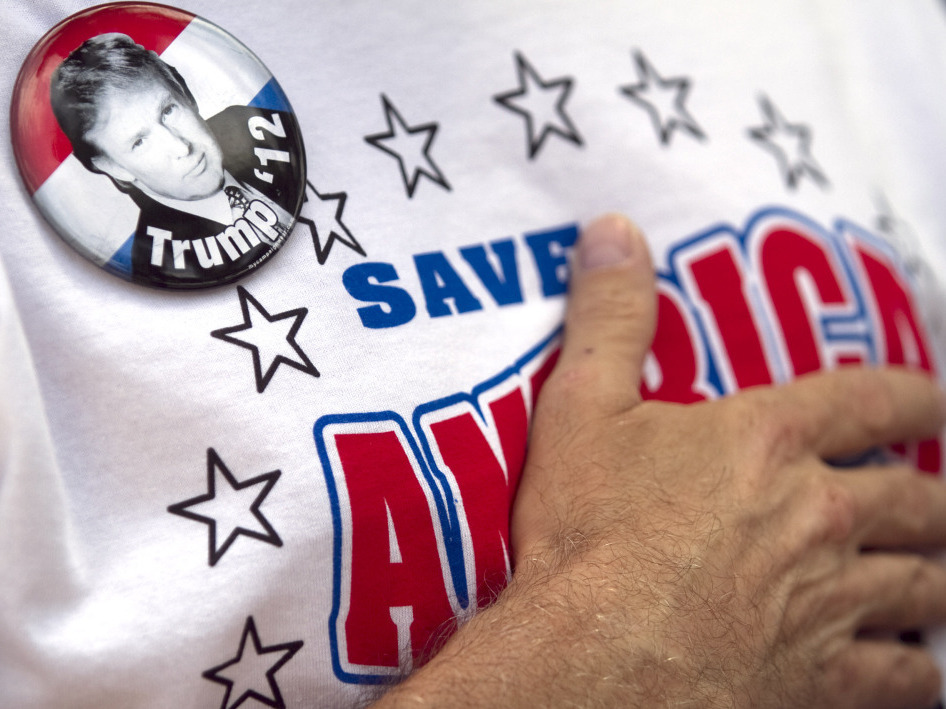 A supporter of Donald Trump holds his hand on his chest while singing the national anthem at the 2011 Palm Beach County Tax Day Tea Party on April 16, 2011 in Boca Raton, Florida.

But there are reasons for caution. Trump has never run for office, and he hates scrutiny from the press. How much does he hate it? He once unsuccessfully sued a guy who wrote that Trump was worth only $250 million. Trump is also very aware of the financial disclosures required of actual candidates. He hasn't taken steps to create the on-the-ground organization typically needed to win primaries.

Despite these apparent stumbling blocks, Weisman says Trump has other cards to play. He directed me to the Iowa Republican Party's web site, where I was greeted by a huge picture of Trump — hair, teeth and all — promoting his keynote speech at a June fundraiser. Weisman told me he was in the state Republican headquarters on the day Trump's appearance was announced. He says that the phones lit up, but at this point, you can't separate Trump's numbers from his fame.

As Weisman says, for all of Trump's insistence that he's serious, when he's interviewed, he'll wind up talking about Celebrity Apprentice and how high its ratings are, which makes it hard to tell whether he's "boosting Donald Trump the celebrity television host or Donald Trump the candidate."

That show he can't stop talking about, by the way, would have to go away if Trump formally announced. For now, he's enjoying himself, boasting about his wealth to interviewers and tormenting senior Republican figures. For instance, Trump has given new life to the so-called birther movement by saying he's sent private investigators to Hawaii to investigate the facts of President Obama's birth there, despite a bounty of evidence proving it. George Stephanopoulos of ABC News pressed Trump about that the other day, and Trump insisted that it's "not a big part of [his] campaign."

But in fact, it's a rallying cry in TV interviews and at public appearances, including a Tea Party event last week in Florida where he told the crowd Obama is "unwilling and unable to show his birth certificate."

So look: If you're intrigued by a self-promoter with a Tea Party philosophy who's best known for plying his trade in the heart of Manhattan, you have your candidate. I'm talking, of course, about the Naked Cowboy, better known as Robert Burck, who can usually be found strumming his guitar wearing little more than briefs, leather boots, and a wide-brimmed hat.

Burck actually says he's running, so that already puts him a step ahead of Trump. The Donald, the ball is in your court.