Accessibility links
War Of Words: Tyler Perry Vs. Spike Lee Tyler Perry has had enough of criticisms of his work, particularly from director Spike Lee. Perry's response to Lee's latest lambasting continues the debate over Tyler Perry, his films and characters — and if they encourage harmful African-American stereotypes. Michele Norris speaks with Toure, host of Fuse's On the Record and author of the forthcoming book Who's Afraid of Post-Blackness?, and Goldie Taylor, contributor to MSNBC and theGriot.com.

Tyler Perry has had enough of criticisms of his work, particularly from director Spike Lee. Perry's response to Lee's latest lambasting continues the debate over Tyler Perry, his films and characters — and if they encourage harmful African-American stereotypes. Michele Norris speaks with Toure, host of Fuse's On the Record and author of the forthcoming book Who's Afraid of Post-Blackness?, and Goldie Taylor, contributor to MSNBC and theGriot.com. 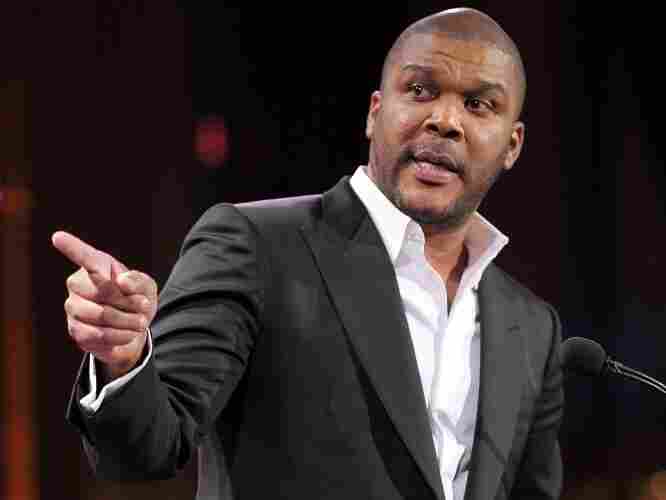 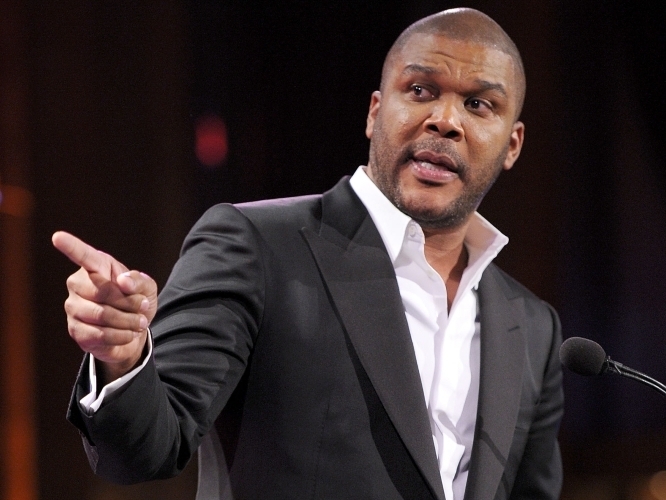 One new movie opening tomorrow is actually the 11th in a franchise of extremely popular films.

Mr. TYLER PERRY (Actor and Director): (as Joe) Can you do something for me, baby?

(as Joe) Can you just hold me one more time?

The actor-director weaves themes about family, religion and black identity into smash hit plays, films and TV shows with titles like "I Can Do Bad All by Myself" and "Why Did I Get Married?" He was also an executive producer of the Oscar-winning film "Precious."

Mr. SPIKE LEE (Film Director): A lot of stuff that's on today is coonery and buffoonery, and I know it's making a lot of money...

Mr. LEE: ...and breaking records, but we can do better.

NORRIS: This week, Tyler Perry fired back while promoting his latest film. He said Spike Lee can, quote, "go straight to hell."

To talk through the war of words between Tyler Perry and Spike Lee as well as some larger questions about race in the film business, we're joined by Goldie Taylor, a contributor to MSNBC and thegrio.com, and cultural critic Toure, whose upcoming book is called "Who's Afraid of Post-Blackness?"

TOURE (Cultural Critic; Author, "Who's Afraid of Post-Blackness?"): Thank you.

NORRIS: Why is there such vitriol for Perry's work?

TOURE: I think there's definitely a divide in between the people who just like the spiritual messages, seeing some black people on screen, and others of us who, when we go to the movies, we want to see more. We want to see transcendent filmmaking. Tyler's title "I Can Do Bad All by Myself" is an excellent title for him because he does do bad all by himself.

He should only mention Spike Lee's name with reverence. Spike is the best black filmmaker of his generation. Tyler Perry is perhaps the worst filmmaker in Hollywood.

NORRIS: Goldie Taylor, we need to hear from you. I mean, those are harsh words. Toure, this weekend, called Tyler Perry the KFC of...

NORRIS: ...black cinema. You are a strong defender of Tyler Perry. You know, he's not forcing anyone to see these films. The "Madea" franchise is a massive success. Most films of his opened in the top 10. They make millions. They put black actors to work. What's wrong with that?

Ms. TAYLOR: Well, first, I say wow. I have not always been such a fan of Tyler Perry, but just as an early Spike Lee, you know, came into the industry with his own brand of coonery and buffoonery and needed to evolve, I'm watching an evolution of Tyler Perry.

I think that Brooklyn is a very long way from Baton Rouge, Louisiana, or from a Dalton, Georgia, where the black existence and how we come of age is, frankly, very different. And so to expect that our art, our creative expression of ourselves would be in any way similar, I think is disingenuous at best. Art did not stop or start at the front edge of the Brooklyn Bridge.

What I applaud a Tyler Perry for doing is for taking very relevant, important things that some other filmmakers are just too afraid to touch and touch them in a special way that meets his audience at his point of need.

I don't think Tyler Perry is talking to Toure. I don't think he's talking to me, but I know that he's speaking directly to my mother, my sister, my cousins and meeting them at their point of need, and that's what art and filmmaking is about.

NORRIS: At the point of need, what do you mean by that?

Ms. TAYLOR: What I mean is that when women are talking about their own sense of brokenness, whether it is themes about incest or themes about domestic violence or joblessness or who we choose as mates, these kinds of very hard themes that Tyler has begun to paint the picture differently. And I think that when my mother and sister and cousins watch this stuff, they see a bit of a reflection of themselves, of their neighbors, of their sisters and friends.

TOURE: You know, I don't disagree with most of what Goldie is saying, although if Tyler equals art, then McDonald's equals gourmet, and to allow our aunts and grandmothers to see this and think this is a good message to be delivered to them, it's really disturbing.

TOURE: It certainly allows for schlocky black films to be made and greenlit.

Ms. TAYLOR: I will say this about making an indictment on Tyler Perry. You simply can't make that on an island. To indict a Tyler Perry means that you have to indict the people who work these sets, who create these screenplays, who act in these films, so then you indict, by extension, Cicely Tyson and Maya Angelou and the list goes on.

And if you want to indict a full cast in the creative community, you know, behind what you deem or don't deem as art, you know, I think that's misplaced. I think that's an indictment too far, but you can't indict Tyler without taking all the rest.

NORRIS: Is this more than just a war of words between two directors who don't like each other very much or perhaps don't respect each other's work? Is there something larger at work here?

TOURE: Yeah. I mean, these are - this relates to very typical schisms in the black community - high and low, North and South, rich and poor, educated and folk knowledge - and where should black filmmaking go? Should it aspire to be excellent and Woody Allen-ish almost, or should it aspire to be marketing and coming from a mass perspective?

NORRIS: Goldie Taylor is a contributor to MSNBC and thegrio.com, and Toure is a cultural critic, and he's also the author of the upcoming book called "Who's Afraid of Post-Blackness?"