'Stake Land' Is Your Land (If You're Feeling Bitey)

'Stake Land' Is Your Land (If You're Feeling Bitey) 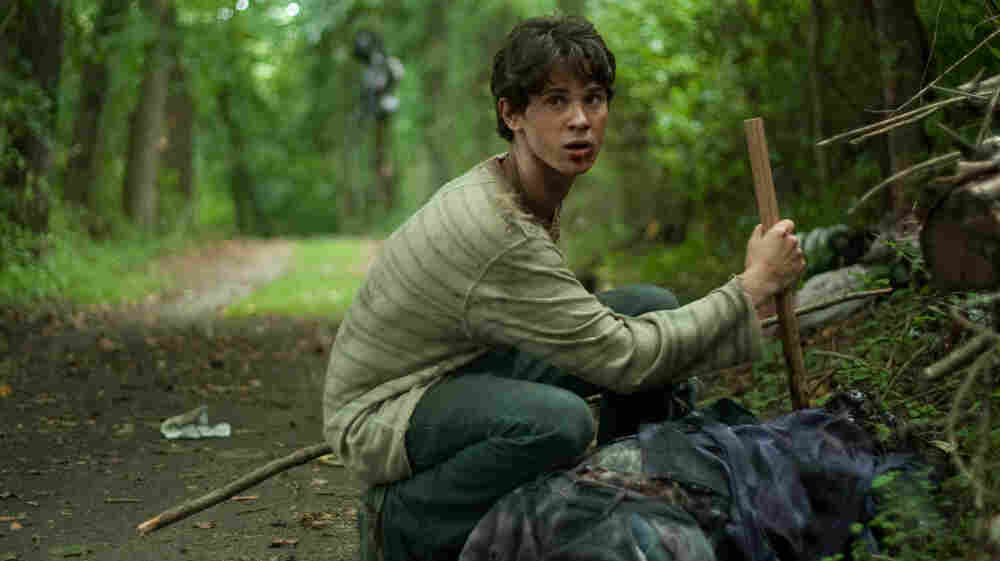 Twilight, It's Not: Martin (Connor Paolo) struggles to survive after his family is massacred by vampires, but he soon learns that other predators — including a religious fundamentalist cult — may be more dangerous in the wild. IFC Films hide caption

LANGUAGE ADVISORY: These scenes contain language some might find offensive.

'Scamp In The Attic'

'Scamp In The Attic'

'How Many Of Those Things Have You Killed?'

'How Many Of Those Things Have You Killed?'

'We Were All Orphans'

'We Were All Orphans'

Over the past decade, the movies have obsessed over doomsday scenarios of all kinds — global warming, global cooling, nuclear war, earthquakes, asteroids, aliens, zombies, shortages in water, oil or food, or the inability to scribble down salon appointments on Mayan calendars after Dec. 21, 2012.

The art-horror indie Stake Land adds vampires to that list, but its true novelty comes less from its apocalyptic scenario than from its vision of how America adapts. If we're the type of culture that has an End of Days fetish — and, clearly, that is the case — then it stands to reason that some stand ready to take advantage should they be among the few to survive.

An odd, ambitious and only partially successful fusion of Terrence Malick poetics and 28 Days Later viscera, Stake Land works best as a skeptical take on Christian rapture fiction — think the Left Behind series, which imagines a pre-Judgment Day period of tribulation in which the righteous war with the forces of the Antichrist. Director Jim Mickle, who co-wrote the script with actor Nick Damici, instead imagines a ravaged landscape where religious charlatans are every bit as dangerous as the feral, relentless, nearly unslayable creatures that feast on the populace. At a time when people are desperately searching for answers, it's the shameless, power-hungry opportunists who step up to provide them.

Like the naive young narrators in Malick's Badlands and Days Of Heaven, Stake Land turns to an innocent to set its wistful tone through an ever-present voice-over track. As the film opens, rural teenager Martin (Gossip Girl's Connor Paolo) has just watched his entire family get slaughtered in a vampire attack, an event that leaves him so numb with grief that he can't process it. Martin owes his life to the intervention of a vampire hunter, played by Damici, who speaks in grim monotone and goes by the name of "Mister."

With Mister tutoring Martin on the finer points of slaying and survival, the two take a treacherous route north to a rumored Canadian idyll known as New Eden. Along the way, they take on a few travelers, including a pregnant bar singer (Danielle Harris) and a nun (Kelly McGillis) whose faith has been shaken by a mass exodus of followers. Mister has his primitive but effective ways of dealing with the vampires, but he faces a stiffer challenge from The Brethren, a fundamentalist cult whose leader (Michael Cerveris) commands a growing militia. 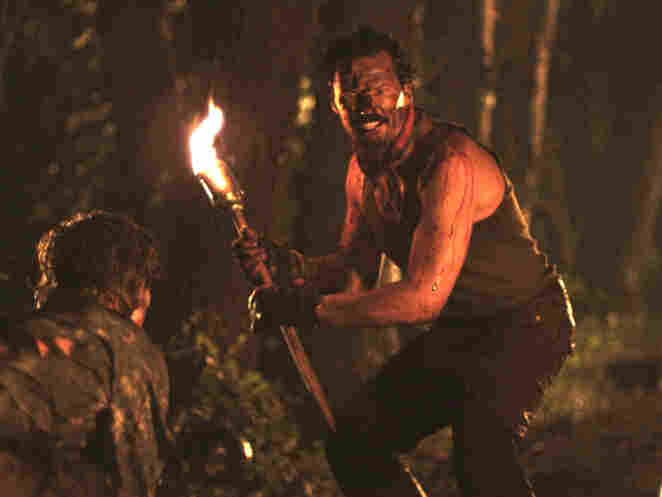 Mister (Nick Damici), an unhinged vampire hunter, saves Martin and teaches him how to survive in the post-apocalyptic wasteland. IFC Films hide caption 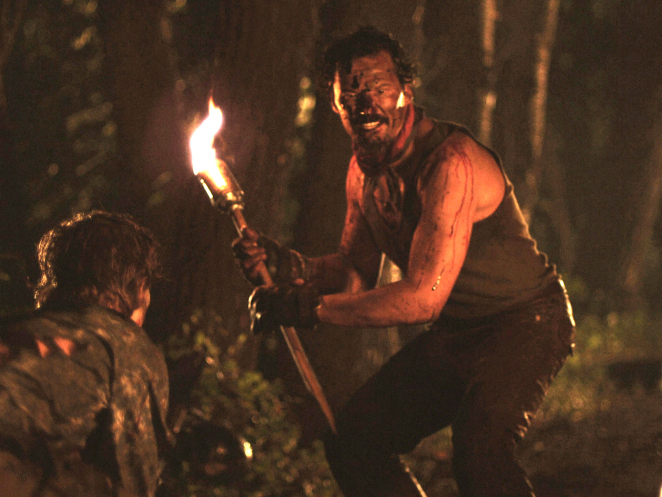 Mister (Nick Damici), an unhinged vampire hunter, saves Martin and teaches him how to survive in the post-apocalyptic wasteland.

Substitute zombies for vampires, and Stake Land has a lot in common with last year's Zombieland: two men in a convertible — one a nomadic warrior who battles the undead, the other his uncertain younger prodigy — who abide by their own quirky set of rules. Tonally, however, Stake Land is closer to the ash- and dust-choked nightmares of The Road or Mad Max, with the heroes stranded in a world that's barren and nearly dead. On a very modest budget, Mickle converts rural outposts into makeshift villages with their own currency and trade, and creates vampires whose decomposing visages seem to reflect the breakdown in society itself.

Only when it reaches too explicitly for profundity does Stake Land fall short, particularly in narration that says too much, suggests too little and doesn't justify its omnipresence. Martin has neither an inner life so complicated that it can't be read nor a perspective so unique and lyrical that it's worth airing out. At times, Mickle fails to trust his ability to get across ideas without having them lacquered in art-house poetry. His vampire apocalypse has been classed up to a fault.

Yet Stake Land belongs to a promising subset of contemporary horror films — including several by its co-producer Larry Fessenden, who directs socially conscious horror, and its production company Dark Sky Films, which was responsible for the superb retro-'80s thriller The House Of The Devil — that seem determined to press the genre beyond mere slice-and-dice. Though it has plenty of shocks, the film creates a wasteland that would be compellingly deranged even without vampires pressing insistently at every border. Horror is just the half of it.