U.S. drone aircraft known as Predators are now flying over Libya around the clock, equipped with missiles to attack forces loyal to Libyan leader Moammar Gadhafi. It's the first time U.S. airstrikes on ground forces have been authorized since control of the operation was handed to NATO on April 4, but Defense Secretary Robert Gates insists it's not a prelude to deeper U.S. involvement. 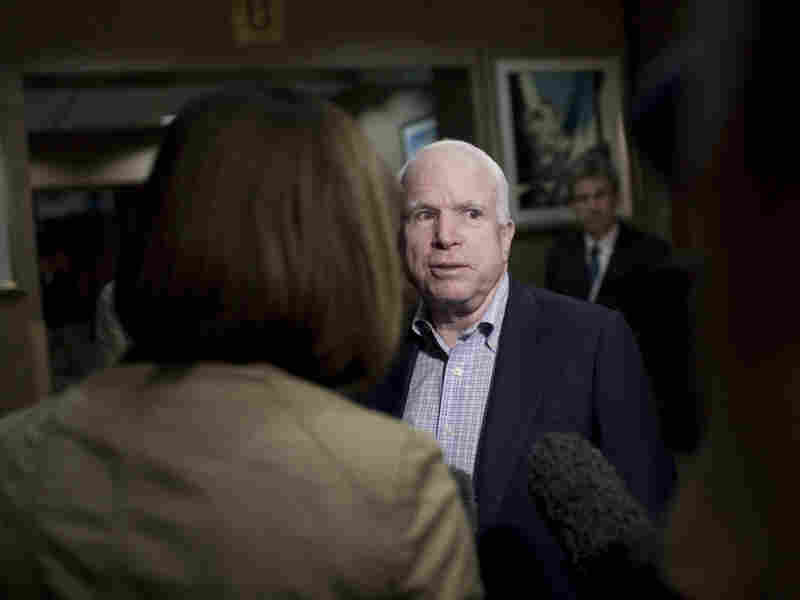 Sen. John McCain talks with journalists Friday at the Tebisty Hotel in Benghazi, Libya. McCain, who has been one of the strongest proponents in Congress of U.S. military intervention in Libya, says he plans to meet with the rebel National Transition Council, the de-facto government in the eastern half of the country, and members of the rebel military. Bernat Armangue/AP hide caption 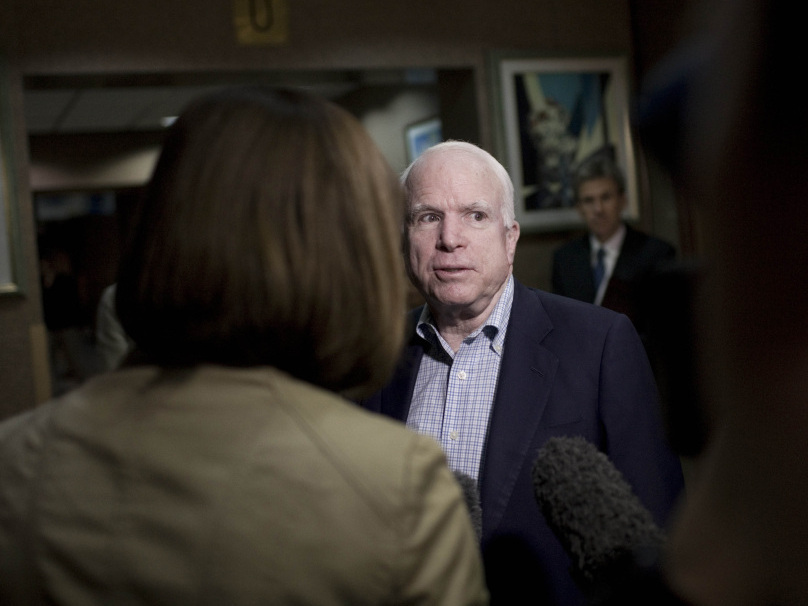 Sen. John McCain talks with journalists Friday at the Tebisty Hotel in Benghazi, Libya. McCain, who has been one of the strongest proponents in Congress of U.S. military intervention in Libya, says he plans to meet with the rebel National Transition Council, the de-facto government in the eastern half of the country, and members of the rebel military.

The Pentagon's move came as one of Congress' strongest proponents of U.S. military intervention in Libya visited the rebel-held city of Benghazi. Sen. John McCain (R-AZ) headed into talks with leaders of the anti-government movement Friday, calling the rebels "my heroes."

The decision to send in drones represents a change from President Obama's pledge that the U.S. was stepping back from such offensive missions over Libya, but Gates said the change is minor.

Asked whether it represents so-called "mission creep" — a drawing of the U.S. back into the forefront of the air campaign — Gates said, "I think this is a very limited additional role on our part, but it does provide some additional capabilities to NATO. And if we can make a modest contribution with these armed Predators, we'll do it. ... I don't think any of us sees that as mission creep."

U.S. said there are still "no intentions of arming the rebels," NPR's Rachel Martin said Friday on Morning Edition, and that the U.S. will not be sending ground troops.

"Gates was actually very frank yesterday and said we still don't know a lot about these people; there are still a lot of questions about who exactly the rebels are," Martin said. "He did say though again that the Obama administration has been very clear: There will be no U.S. boots on the ground in Libya, and that there is just no wiggle room on that issue."

Britain and France have been urging the U.S. to step up its role in the NATO-led operation, to help break the stalemate between Gadhafi's forces and Libyan rebels, who have complained that NATO airstrikes have been largely ineffective.

Chairman of the Joint Chiefs of Staff Adm. Mike Mullen said Friday that NATO's strikes have degraded Gadhafi's ground forces by 30 percent to 40 percent so far, but he acknowledged to reporters during a visit to Baghdad, Iraq, that the situation remains deadlocked.

Gadhafi's forces have tactically adapted to the NATO strikes, said Marine Gen. James Cartwright, the Joint Chiefs vice chairman, and the drones will give NATO commanders a new level of targeting precision.

The drones also can help counteract the pro-Gadhafi forces' tactic of traveling in civilian vehicles that make it difficult to distinguish them from rebel forces, Cartwright said Thursday.

"What they will bring that is unique to the conflict is their ability to get down lower, therefore to be able to get better visibility on targets that have started to dig themselves into defensive positions," he said. "They are uniquely suited for urban areas."

The U.S. has been using the same drones against terrorist networks in the northwest part of Pakistan near the Afghan border.

Drones have routinely flown surveillance missions over Libya, but this is the first time they'll be used for airstrikes since the conflict began March 19, Gates told reporters at a Pentagon briefing Thursday. Defense officials said these drones will fly along the coastline, where fighting has been most intense, especially in places like Misurata.

The drones wouldn't likely be used to target Gadhafi himself, NPR's Martin said, because it's been made clear that any lasting regime change will have to come from the Libyan people.

Gates said Thursday that "everyone agrees that Gadhafi has to go," Martin said, "but at the same time, he's been very clear on this. That regime change has to happen from within — any time an external force tries to bring this to bear, that this can be very complicated, can bring a lot of problems about. So the administration's line really has been this has to be Libya's decision — the Libyan people have to force Gadhafi out if he's ever to go."

On Friday, Sen. McCain said he made the trip to Benghazi to get "an on-the-ground assessment of the situation" there. The former GOP presidential candidate planned meetings with members of the National Transition Council and the leadership of the rebels' ad hoc military force.

The trip by McCain, the highest U.S. official yet to visit the rebel-held east, provides a boost to the forces fighting Gadhafi, whom he called "my heroes." Details of the trip were shrouded in secrecy due to heightened security in a country fiercely divided by the two-month-old rebellion.

McCain has criticized the Obama administration's cautious approach to the uprising, saying the U.S. shouldn't withhold its unique capabilities.

Invoking the humanitarian disasters in Rwanda and Bosnia in the 1990s, McCain pressed for U.S. military intervention in February, weeks before the U.N. Security Council authorized military action to protect civilians and impose a no-fly zone over Libya.

When Obama acted with limited congressional consultation, McCain defended the president, saying he couldn't wait for Congress to take even a few days to debate the use of force. If he had, "there would have been nothing left to save in Benghazi," the rebels' de-facto capital.

But as the U.S. handed operational control over to NATO and withdrew U.S. combat aircraft, McCain criticized the administration.

"For the United States to withdraw our unique offensive capabilities at this time would send the wrong signal," McCain said. He said the U.S. must not fail in Libya and said he spoke as someone experienced in a lost conflict, a reference to his time as a prisoner of war in Vietnam.

McCain also has pushed for arming the rebels, saying the U.S. and its partners cannot allow Gadhafi to consolidate his hold on one section of the country and create a military deadlock.

NPR's Peter Kenyon in Benghazi, Libya, and Rachel Martin in Washington, D.C., contributed to this story, which contains material from The Associated Press.