Accessibility links
Foreign Policy: America's Best Worst Partner In Africa The African Union has been wary of outside intervention in the Libya conflict from the start, and last week, they tried to organize a cease-fire in Libya. Jonathan Stevenson of Foreign Policy argues that while the AU isn't an exemplary organization, ignoring its concerns about Western intervention in Libya is a recipe for disaster. 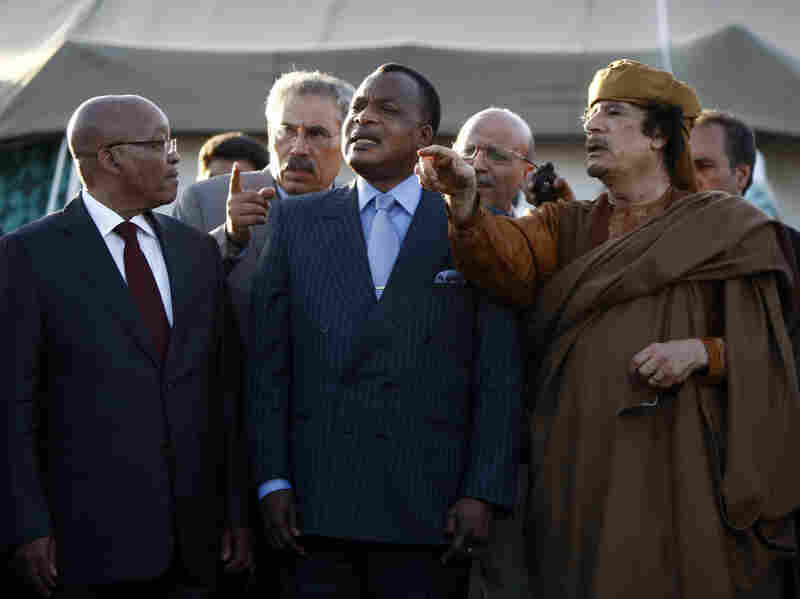 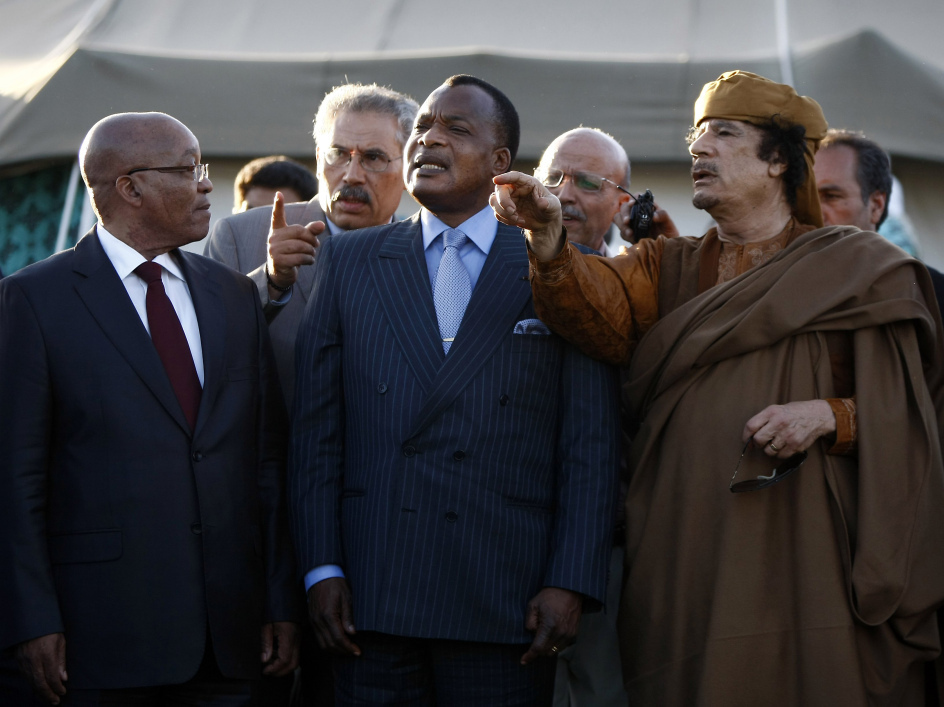 Libyan leader Moammar Gadhafi speaks with presidents Jacob Zuma of South Africa (L) and Denis Sassou Nguesso of Congo in Tripoli last week, during a meeting with a high-ranking African Union delegation trying to negotiate a truce between Gadhafi's forces and rebels seeking to oust him.

Jonathan Stevenson is a professor of strategic studies at the U.S. Naval War College and co-chair of its Africa Regional Studies Group.

Once the Arab League was firmly onboard, U.S. President Barack Obama probably thought he'd cleared the major diplomatic hurdles to Western military intervention in Libya. But it is the African Union (AU) that has been the most uncomfortable with it. The AU called for an immediate halt to allied air operations hours after they began, and in a March 10 communique it resolutely expressed its "rejection of any foreign military intervention, whatever its form" while also recognizing "the legitimacy of the aspirations of the Libyan people." As the military advantage has seesawed between rebel and government forces and the U.S.-led coalition has hardened its insistence on regime change, the AU has tried to engineer a cease-fire, sending a delegation to Libya to talk to both sides. The rebels duly rejected the AU's proposal, which would have left Libyan leader Moammar Gadhafi in power and did not require his forces to withdraw from besieged cities.

Yet the United States should have expected AU pushback. Not without justification, the organization is often seen as a shambolic club for dictators whom Gadhafi himself has enriched. But the AU, at least by default, is also the continent's most effective multilateral institution. For that reason, the United States should broadly embrace its effort to resolve the Libyan conflict on African terms as a salutary attempt to take ownership of an African problem.

More is at stake here than just the future of Libya. The Libya intervention constituted the first major combat operation led and largely executed by U.S. Africa Command (Africom), the United States' newest combatant command, established in October 2008. Before it became operational, tone-deaf U.S. statements conjured images of American bases sprinkled throughout the continent and operational hyperactivity to match. African leaders and populations were so fearful of the neocolonial militarization of U.S. Africa policy that the Pentagon could not find a willing regional host for Africom and instead has had to locate the command's headquarters in Stuttgart, Germany.

During its first two years, Africom was able to address America's two most important African security concerns — ensuring access to oil and gas and checking a rising transnational Islamist terrorism threat — while keeping a self-consciously low profile and small footprint that calmed African nerves. The U.S. military's only "kinetic" actions on African soil were selective airstrikes and commando raids on terrorists in Somalia. Africom worked alongside the State Department to build African security capacity through multilateral regional initiatives and groups. The Africa Partnership Station — a group of U.S. Navy ships dispatched to ports in West Africa and later piracy- and terrorist-plagued East Africa to train local maritime forces — quietly became an exemplar of enlightened gunboat diplomacy.

The Libya operation has reinvigorated African fears about American power. In 1992, African countries largely welcomed the United States' humanitarian military intervention in Somalia and its promise of a post-Cold War "new world order." Back then, however, the AU did not exist. The reigning continentwide body was the feckless Organization of African Unity (OAU), emasculated by the superpowers' geopolitical domination of the continent and the political decadence that it conditioned. In the event, "mission creep" in Somalia led to an ignominious U.S. withdrawal in 1994, American inaction with respect to the Rwandan genocide, and an impression among Africans that the United States had no taste for African challenges.

With Africa strategically neglected, it was Gadhafi who laid the foundation for more substantial African regional assertiveness in world affairs by spearheading the fin de siècle creation of the AU to replace the OAU. In particular, he doggedly reinforced the AU's guiding proposition — echoed loudly by Western governments — that Africans should start solving African problems. His generous investment of Libyan oil revenues around the continent, of course, was a more venal inducement to African fealty. But principle as well as self-interest helps explain, if it does not excuse, South African President Jacob Zuma's term of endearment for Gadhafi — "Brother Leader" — and African officials' wish to ease his burden.

However mortal the sins of its godfather, given its severely constrained resources the AU has done a reasonably creditable job of advancing liberal African multilateralism since its inception in 2002. To be sure, the AU is partly composed of brutal, kleptocratic dictators. But institutionally, it is not overtly sympathetic with them or with military coups. It has, of course, opposed an international war crimes trial for Sudanese President Omar Hassan al-Bashir. But the AU has also, for example, imposed sanctions on Togo to compel democratic (albeit flawed) elections, pushed for former Chadian dictator Hissene Habre to stand trial for war crimes, and marshaled large contingents of continental troops to thwart ethnic-cleansing militias in Darfur and jihadi militants in Somalia. And it has worked closely with the United States and other outside powers to establish regional African "standby forces" for peacekeeping operations. Although a deeply flawed and unquestionably hypocritical organization, the AU easily beats its sorry predecessor. And it's all we've got.

While it would be irresponsible for the Obama administration to completely disown the Libya operation, it also needs to allay the AU's worries about American militarism and encourage the AU's disposition to rise to its geopolitical responsibility. It should be open to any AU plan consistent with regime change. Beyond that, Washington has to maintain good relations with the AU to ensure the effectiveness of Africom as a key instrument of U.S. energy and counterterrorism policy. Much as Washington might not like the AU, it cannot ignore the AU, nor afford to turn the AU into a diplomatic adversary.

Sub-Saharan Africa is only slowly democratizing. The typical African head of state — a relatively evolved one like Botswana's Seretse Khama Ian Khama nearly as much as Zimbabwe's retrograde Robert Mugabe — remains attuned most sharply to threats to his continuation in power. Revolutionary populism does not have the steep trajectory that it does in the Middle East. Although opposition to illiberal leaders can be robust, it is usually channeled — often effectively — through existing political institutions. For the United States to overtly encourage the rapid acceleration of democratization with intimations of armed support could engender continental instability when the rest of the world is turbulent enough.

This is not an argument for cynically coddling African dictators, as the United States did during the Cold War. But Washington does need to appreciate the nuances of African politics and security and to articulate compatible limits on the Libyan precedent. Otherwise, it risks diminishing access to oil needed to reduce American dependence on Persian Gulf suppliers, security cooperation needed to combat potential al Qaeda franchises like Somalia's al-Shabab, and indeed the influence required to promote further political reform and shape development in Africa. Furthermore, the United States simply does not have the resources or the wherewithal to police a continent as vast and troubled as Africa; nor do its European allies. It needs an institutional partner, warts and all.

Accordingly, the United States' "strategic communication" to Africa about Libya should emphasize that Africom will continue to be employed mainly to consolidate military-to-military relationships with existing governments and regional organizations while encouraging reform, to enhance Africa's institutional capacity, and to improve its governance. But the administration cannot be disingenuous or obtuse. Especially if the war yields the intended results — regime change and a viable democratic process in Libya — the United States must also acknowledge its standing inclination to actively support popular African political movements demonstrating a credible commitment to democratization.

The crucial piece of the message would be what kind of support would be given under what conditions. The administration should cast Libya as a case, in lawyer's parlance, limited to its circumstances. That is, the United States would intervene militarily in support of a popular insurgency only if the insurgency appeared to want, but didn't have realistic resort to, a democratic process; faced a leadership in power determined to use excessive military force; and was decisively overmatched in military terms. Washington should further declare that as a general rule, U.S. support would be political rather than military, overt rather than covert, and preferably extended through and coordinated with the AU.

Thus qualified, the new U.S. policy emerging from the Libya intervention would accord due respect and authority to the AU — no more, no less. At the same time, it would leave incorrigible strongmen like Mugabe at some direct risk — as it should — while reassuring the majority of African leaders, who have embraced tentative democratic experimentation if not full-fledged democracy, that the United States' business with them would proceed as usual. In Africa and elsewhere, it might then be easier for Obama to replace the ominous neoconservative foreign policy narrowly focused on jihadi terrorism that he inherited, Africans fear, and he has found hard to jettison, with a coherent liberal realist policy distinguished by American military restraint and strategic wisdom.