Accessibility links
Navigating The Budget Maze, Without Getting Lost The budget proposals from President Obama and House Budget Committee Chairman Paul Ryan are filled with claims about reducing deficits, spurring economic growth and cutting spending. But they're often not particularly reliable or well-founded. Experts explain how to read the numbers to find out what's really going on.

President Obama has gone coast to coast this week to stump for his new budget proposal — a plan to shrink the government's ballooning debt. Meanwhile, Republicans are pushing their own plan, developed by House Budget Committee Chairman Paul Ryan.

Sorting through the conflicting claims is not easy. Even in the best of times, budget plans arrive in a blizzard of numbers. When the country faces daunting fiscal challenges, as it does now, the storm gets even more blinding.

The 'Crazy World' Of Budget Baselines

The president says his plan would reduce the deficit by $4 trillion over the next 12 years, with "about $2 trillion in spending cuts across the budget." He also touts a $1 trillion reduction in interest payment on the debt, and another $1 trillion in cuts to tax expenditures. 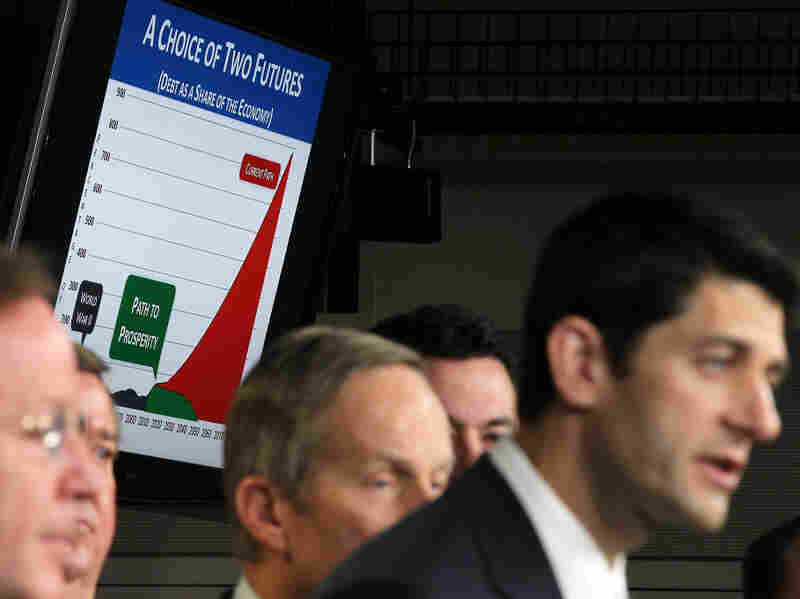 U.S. Rep. Paul Ryan, chairman of the House Budget Committee, unveiled a plan that, like President Obama's, includes about $4 trillion in budget savings. An analysis from the Committee for a Responsible Federal Budget crunches the numbers for both plans. Alex Wong/Getty Images hide caption

So, both the president and Ryan are claiming around $4 trillion in budget savings — that seems clear. But it's not that simple, says Maya MacGuineas of the Committee for a Responsible Federal Budget, a bipartisan advocacy group.

"The question is: Saving compared to what?" she says. "And that's where you get lost in the confusing, crazy world of budget baselines."

For instance, Ryan is required by law to use the Congressional Budget Office baseline as his starting point. But that baseline presumes the expiration of the Bush tax cuts at the end of 2012, and continued high-level spending on the wars in Iraq and Afghanistan for the next decade — neither of which is likely.

Further complicating things, Obama's new proposal makes a number of changes to that baseline. So the $4 trillion in deficit reduction they both claim isn't directly comparable.

MacGuineas' group decided to crunch the numbers for both proposals, using a common baseline and the standard 10-year time frame — not the 12 years the president is using. It found that the president's plan saved about half as much as Ryan's.

"A little bit less than $2.5 trillion over the same period," MacGuineas says. "So an apples-to-apples comparison brings a lot of things to light."

That's largely because a big share of the president's savings came in the 11th and 12th years of his plan.

Another Way Of Looking At It

But there's another way to get a handle on what a politician is doing in a budget proposal, says Clint Stretch, a budget specialist at the consulting and financial advisory firm Deloitte.

Ask this question, he says: "What are they saying about the level of spending and the level of tax that they desire to have as a share of the economy, as a percentage of GDP?"

That number tells you the size of government that the politician imagines in the future. Ryan's proposal would lead to a shrinkage of government from almost a quarter of the economy right now to under 15 percent 40 years from now — that's about the size of the government back in the 1950s, before Medicare and Medicaid.

"The president is saying, no, you know the population is getting older, we've made a lot of retirement promises — we ought to try to keep those," Stretch says. "So the government will get bigger because we have more people in retirement."

How much bigger? A couple of points above the long-term average. Stretch acknowledges that in a $16 trillion economy, these numbers are hard to get your head around.

"And so for a lot of people, the more important question is: Are the spending recommendations and the tax recommendations that are made — do they seem like they are about the kind of country you would like to live in?" he says.

And finally: Is this a vision of the future that you're willing to pay for?