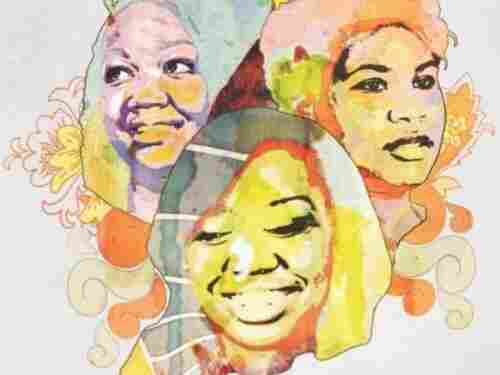 As horns triumphantly enter the fray, the bewitching and modern magnetism of King's "Supernatural" becomes inescapable. Courtesy of the artist hide caption

With soul revivalism still in full swing, it can be hard to find songs that break free from classic soul's strict boilerplate. But not only does King's sterling "Supernatural" establish itself squarely amongst 21st-century soul electronica with its stargazing synth chords; the L.A.-based group also stands out from many other female R&B combos by writing, producing, singing and handling nearly all of its songs' instrumentation.

Paris Nicole Strother crafts a celestial arrangement that recalls Motown's early-'70s transitional period, when the label inched away from its "Sound of Young America" template into adventurous sonic explorations spearheaded by the likes of Stevie Wonder and Syreeta Wright. "Supernatural" opens with Strother and her trio mates, Amber Strother (Paris' twin sister) and Anita Bias, crooning heavenly a cappella harmonies before Amber's angelic voice takes the lead as she sings wistfully about being enchanted by a spellbinding lover.

Swinging martial drums and gleeful handclaps underscore the arrangement, while the singing grows more impassioned and intricate. Toward the end, as the Regiment Horns triumphantly enter the fray, the bewitching and modern magnetism of "Supernatural" becomes inescapable.