Accessibility links
Chinese Truck Drivers Block Port Over Gas Prices Thousands of truck drivers in the Chinese city of Shanghai staged a third day of protest Friday over rising fuel prices they say are crippling their businesses. The protests come amid a government crackdown on intellectual and political dissent of any sort. 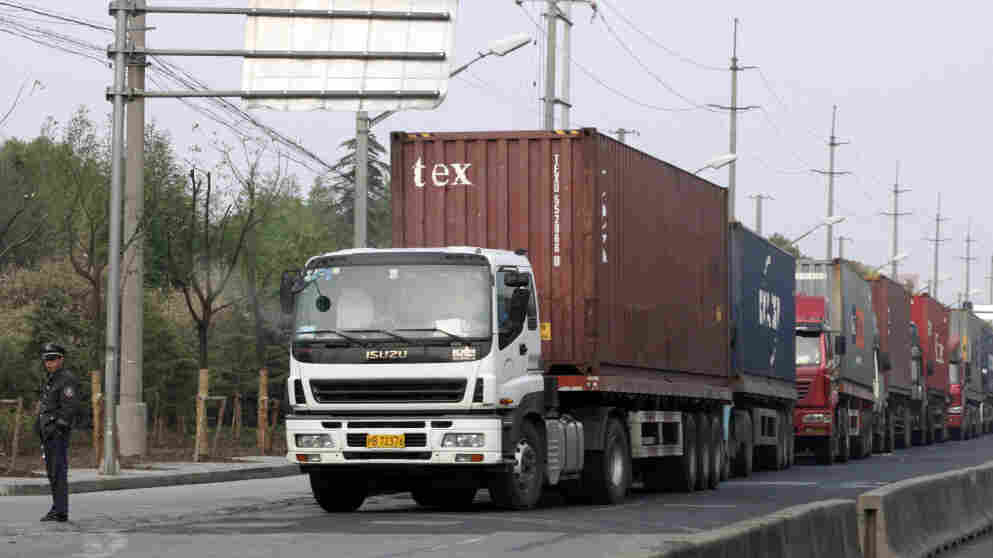 Trucks left parked on a road near a Shanghai port Friday. Truck drivers protested for a third day over rising fuel costs and fees, disrupting the flow of goods. Eugene Hoshiko/AP hide caption 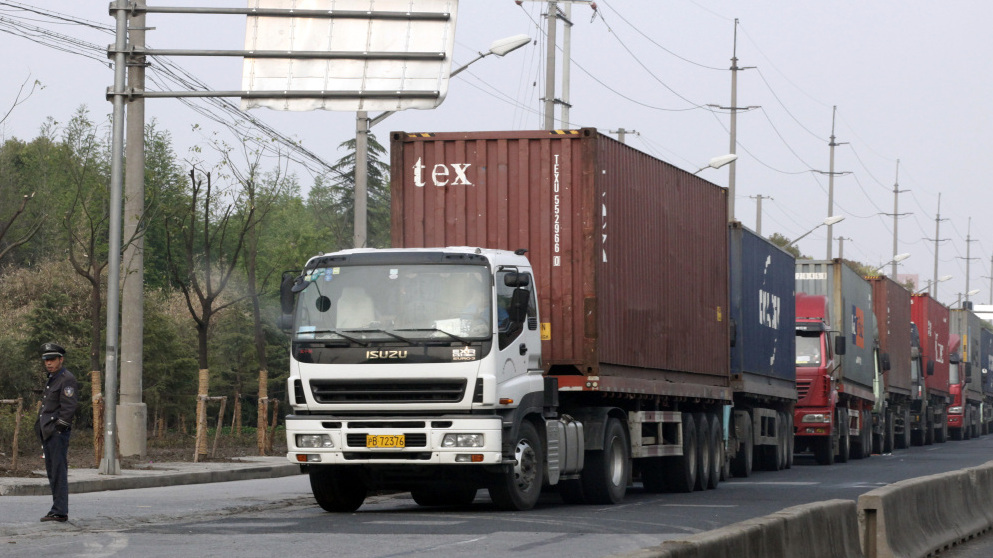 Trucks left parked on a road near a Shanghai port Friday. Truck drivers protested for a third day over rising fuel costs and fees, disrupting the flow of goods.

Thousands of truck drivers in the Chinese city of Shanghai staged a third day of protest Friday over rising fuel prices they say are crippling their businesses. Truck drivers blockaded part of the city's port — China's busiest — disrupting the flow of goods.

The protests that began on Wednesday are the latest sign of rising public anger over surging inflation that the country's leaders have failed to tame. They come amid a government crackdown on intellectual and political dissent of any sort.

The international community has focused on the continued detention of well-known Chinese artist Ai Weiwei and other political activists. But for the ordinary people of China, there are more mundane concerns than political reform.

Near one of Shanghai's main port areas, where the Yangtze River meets the sea, groups of truck drivers milled around Friday near a long line of trucks parked bumper to bumper and side by side. They were unafraid to speak, though unwilling to give their names for fear of reprisals.

They can't even afford to eat because the price of gasoline is now so high, one man says, looking warily over his shoulder.

China has raised fuel prices several times in the past year, blaming the rising cost of crude oil. This month gasoline and diesel prices hit a record high after the government raised them by as much as 5 percent. The drivers are also angered at new fees introduced by warehouse operators.

Another man says the police have responded with violence — beating up many truckers. One of his friends was beaten and another arrested, he says.

The man claims that some 20,000 truckers have gone on strike. It's a number that is hard to confirm. The likelier number of about 2,000 protesters is still a major event in China.

A woman interrupts to urge that news of the truckers' protest be spread far and wide, so that the government pays attention. That's something that has already been happening on the Internet.

China has banned foreign microblogging sites that it cannot control, such as Twitter, but news of the recent strikes in Shanghai leaked out through the Chinese equivalents of Twitter, known as Weibo and used by many urban Chinese. Word about the strikes initially appeared there, before being deleted by the authorities.

"The microblogs [have offered] an alternative platform for people to communicate," says Ying Chan, a professor of journalism at Hong Kong University. She says the government has decided it cannot stop such new platforms developing, and so must try to channel and control them.

"I think they are very concerned," she says. "That's why the Weibos are monitored very closely by various methods."

Chan says it is not the political issues that are the most threatening to the government, but bread-and-butter economic issues.

"People are concerned with their basic livelihood issues," she says. "Inflation's [a] real issue, so people react."

Back near the docks, the drivers say they have heard that truckers at other ports around the country are striking too. They deny they are in contact with drivers elsewhere.

That is a huge concern for the government — that the new forms of communication could cause disenfranchised elements of society across the country to link together, and form some kind of organized opposition.