Accessibility links
Baltimore Filmmaker John Waters Plays Not My Job The tagline for Waters' 1972 classic, Pink Flamingos, was: "An exercise in poor taste." So we ask the cult filmmaker and Baltimore native three questions about the classy tradition of British high tea. 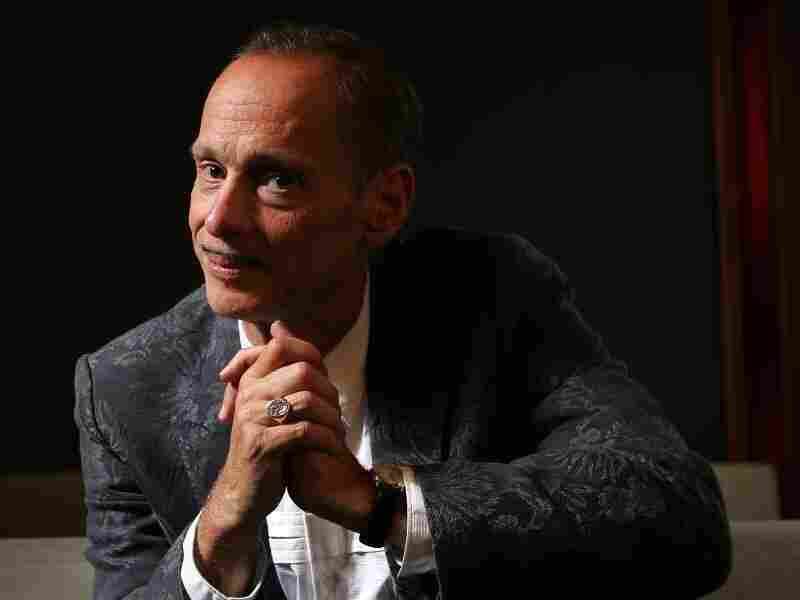 When we were preparing for our show in Baltimore, people in the know told us that the city isn't really the urban dystopia depicted in The Wire, nor is it the cornucopia of baked goods from Ace of Cakes. No, the real Baltimore can be found in the work of cult filmmaker and Baltimore native John Waters — the man behind Pink Flamingos, Hairspray, Cry-Baby, Pecker and many more.

We've invited Waters to play a game called "Please, dear, do have another cucumber sandwich, won't you?" Three questions about the great British tradition of high tea ... for a filmmaker whose Pink Flamingos tagline was "An exercise in poor taste."

And now, the game where we ask people who know a lot a few questions about the little they don't know. When we came to Baltimore, we were told by people who know that we shouldn't expect to see the urban dystopia depicted in the TV show "The Wire," nor the cornucopia of baked goods you see on "Ace of Cakes."

SAGAL: No, the real Baltimore, they told us, can be found only in the work of cult filmmaker and Baltimore native Mr. John Waters. So here to explain this strange world to us, John Waters.

SAGAL: So I was surprised to find out that you did not actually grow up in the city.

M: No, I grew up in suburbia, which I ran from as quickly as I could.

M: I wanted to come downtown and be a beatnik. Even in grade school, I knew something was terribly wrong, but I was happy.

SAGAL: What drew you to downtown Baltimore, to the city?

M: Well, I first came downtown, and I saw beatniks, and I saw people that didn't fit in. I saw outsiders that didn't even fit in with their own minority. And that's always been my people, really.

SAGAL: Right. People who are so outside, even the outsiders don't know what to make of them.

M: Yes. But as you know - if you spend even another 24 hours in Baltimore - everyone thinks they're normal here, but they're insane.

M: Take a walk. You'll see people that look like Divine on the first corner, really.

M: I went to a bar here last week that someone took me to, and it was in a woman's house. You could see her bed. But it was also a hardware store.

M: So you could order drinks and buy nails. It was nice.

SAGAL: It was a woman's home, hardware store and bar.

SAGAL: You've got a book that's coming out in paperback, called "Role Model." And in it, one of the things you mention is your parents seem to be actually - what's the word - they were tolerant of your...

M: They were very tolerant, and mortified.

M: Some of the best - my last movie, my father - at the premiere - said: It was funny, but I hope I never see it again.

SAGAL: But you write that they actually took you down to this bar when you were underage.

M: My mother did, took me to Marnicks. It was kind of a beatnik bar. And let me see, yeah.

M: And hang out in the alley. And my first movie star, Malcolm Soul, worked there. And she was a really amazing beatnik. She was a female, female impersonator. She was.

SAGAL: No, wait a minute.

SAGAL: So your mother would drive you - you were underage.

SAGAL: Your mother would drive you to this bar so you could hang out, outside the bar, with the characters inhabiting the bar.

M: Well the characters came out because the owner knew I wasn't 21.

M: God, this is like the best kind of home-schooling.

SAGAL: It really is.

SAGAL: So were they worried about you to...

SAGAL: ...the extent that they were like, we don't know what little Johnny is going to do with his life, so we'd better just indulge whatever he wants so he can find his way?

M: Well, I don't think they indulged. They knew that I wanted to do something at least. That's the thing. If you're in high school and you're crazy but you know what you want to do, you go to school to learn, figure out what you want to do. But I already knew. I should have quit school in sixth grade. I would have made two more movies.

SAGAL: Would you describe, for those who aren't lucky enough to have seen one, what - like, a John Waters movie is, quintessentially?

M: Well, I think it just worships - you know, it's political action against the tyranny of good taste.

SAGAL: Would there be a John Waters, at least in terms of your career, if you hadn't grown up Baltimore?

M: Who knows? Because I did, and I still live here. But everybody in wherever you live, if you learn to celebrate what people try to hide about your community, you can have success.

M: Do they ever ask you to do like, a tourism film for the visitors center?

M: I do do it. Look on the tourist site. They even did a bumper sticker saying, come to Baltimore and be shocked. That was put out.

M: The people got confused and said come to Baltimore and be shot? I said shocked, not shot.

M: You have to pay extra for shot.

M: We're not that cool here.

SAGAL: Yeah, I know. That would be great, though. I have an odd question.

SAGAL: Are you anybody's uncle? Because you'd be a great one.

SAGAL: I was about to say, I don't know how many people you are uncle to, but they are all going to have best-selling memoirs someday.

SAGAL: John Waters, we are so pleased to be visiting with you here in Baltimore.

SAGAL: But we've invited you to join us to play a game that this time, we're calling...

"Please Dear, Do Have Another Cucumber Sandwich, Won't You?"

SAGAL: You got famous for your love of things that were trashy, so we thought we would ask you about the great British tradition of high tea.

SAGAL: That afternoon ceremony redolent of class and style. Answer two of three questions correctly, you'll win Carl's voice for one of our listeners. Carl, who is film director auteur John Waters playing for?

KASELL: John is playing for Owen Connally of Arlington, Virginia.

SAGAL: Which of these is a common misconception about British high tea: A, that you have to drink tea - many enjoy beer; B, that you have to dress up - traditionally, you can do it in dressing gowns or even your underwear; or C, that it is called high tea. It's really known as low tea.

M: I think they're all wrong.

SAGAL: You think they're all wrong?

M: I think - you were going to say, can you be high and have high tea?

SAGAL: Yeah, well, that's why they call it that.

M: I was with my mother when I had it in London, so we didn't. But it certainly...

M: Were you in the alley outside the hotel?

M: To me, the three things you said, I don't believe are true.

SAGAL: Well, one of them is true. Either you can drink beer at high tea, you don't have to dress up, or that it's actually known as low tea.

M: I guess beer. You could. I don't know - I mean, I guess you could. They're not going to throw you out. But I mean, certainly I've never seen it where you didn't dress up. But I did it in fancy places. Maybe you can have high tea at, you know, the Bloody Bucket.

SAGAL: That would be fun.

M: We've learned so much here.

SAGAL: One of them is actually true.

M: One of them is true. I guess that you don't have to get dressed up.

SAGAL: It turns out that high tea, in the traditional British use, is had later in the evening, and it's with more of a meal. And it's for lower-class people who need to eat after a long day of work. The afternoon tea is known as low tea. It doesn't come with as much food because it's for high-class people who do not work.

M: Well, somebody better tell those people at Harrods because they keep selling high tea.

M: And I went to Claridge's, and it was called high tea.

SAGAL: Americans and tourists all think of it as tigh tea.

SAGAL: It's like high class, so they call it that for your benefit.

M: But it wasn't just Americans there. Well, maybe it was.

SAGAL: The next question - you still have two more chances - there are rules to follow during your tea, including which of these: A, never, ever spread your legs more than one finger's length apart; B, do not stick your pinky out when drinking your tea - it is rude; or C, cover your mouth when laughing, even if you have to put the tea down first.

SAGAL: One of these is a rule.

SAGAL: That people at high tea/low tea should observe, according to standard British etiquette.

M: The finger thing seems like such a clichÃ© that I don't know, maybe it's that one. I don't know. What's the third one?

SAGAL: The third one is you have to cover your mouth when laughing, at all times, even if you have to put your cup down first. If somebody tells a joke - cup down, then, hee-hee-hee.

SAGAL: Do not stick your pinky out; you might point it at someone. Instead, you curl it gently, sort of just away from the cup.

So last question - if you get this, you win it all. If you were to go to Britain for genuine low tea, meaning high tea...

SAGAL: You might encounter some unusual foods, such as which of these: A, curdled butter balls; B, fish-paste sandwiches; or C, fried acorns.

SAGAL: One is right.

SAGAL: And two are wrong.

SAGAL: So it's curdled butter balls.

SAGAL: Fish-paste sandwiches or fried acorns. Butter balls could be a character in one of your movies, it appears to me.

SAGAL: Told they're delicious. Carl, how did John Waters do on our quiz?

M: Do you ever give walking tours of Baltimore?

M: In private, yeah, because a lot of times the press wants me to do that. But it's kind of rude to butt into a bar and say: There's one, with the hairdo, look! You know?

M: It's kind of condescending to do that.

M: You should come to Baltimore because we have a great sense of humor here. It's the only city in the world, if you say I'm moving to New York, people say, why?

SAGAL: John Waters has a book; it's called "Role Models." It's out in paperback this week. John Waters, what a pleasure to have you here. Thank you so much, sir.