Accessibility links
Obama Raises Celebrity Cash, But Trip Goes Off Script President Obama returned from a trip to the West Coast with a few million dollars more in his re-election campaign's bank account — thanks to Hollywood glitterati and other donors. But the real world managed to intrude on the trip as well: Gas prices came up again and again. 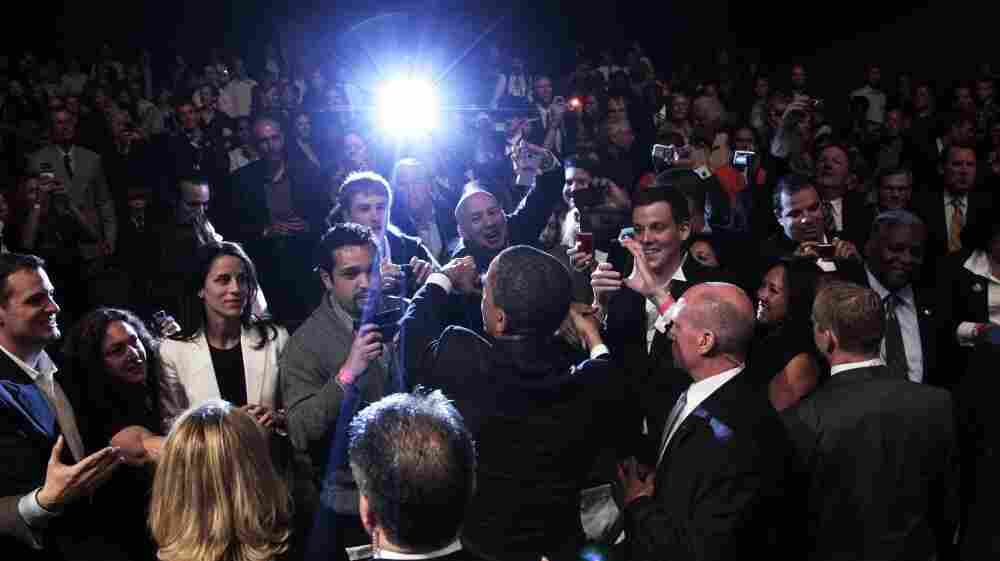 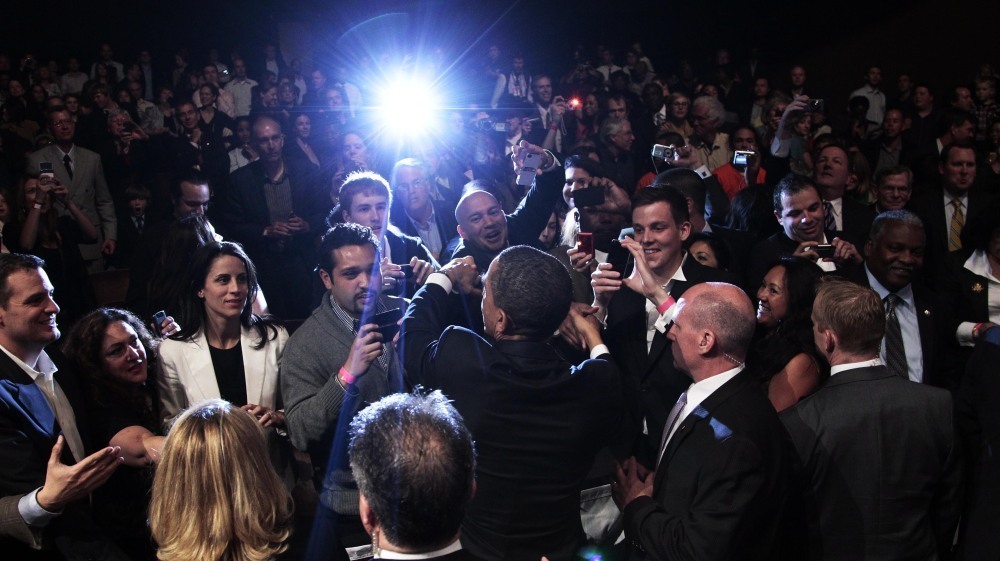 President Obama shakes hands with supporters after speaking at a DNC fundraiser at Nob Hill Masonic Center in San Francisco, Calif., on April 20.

President Obama's re-election fundraising push is in full swing. After a trip to the West Coast, he returned to Washington with a few million dollars more in campaign's bank account.

But the 2012 presidential election is still a long way off. How long?

Well, when supporters started chanting, "Four more years," at a rally on the Sony movie lot this week, Obama responded: "Well, actually, technically, it's about five and a half."

The cavernous soundstage — where the fourth Spider-Man movie recently completed filming — was full of clamoring fans who treated the president like a superhero.

"This campaign is in its early stages, but now's the time you can step up and help shape it — and make sure we're out of the gate strong," Obama said.

Thanks to this trip, the campaign is out of the gate strong financially.

Here's a quick breakdown of the numbers: two days, two cities, six fundraisers. Two were big, raucous events like the one at Sony. The other four were smaller, quieter and far more lucrative.

Donors paid as much as $35,800 for an intimate meal with the president. That's the most an individual is allowed to contribute by law.

When Obama left the Sony movie lot, his motorcade raced down empty Los Angeles streets to a restaurant where Tom Hanks, Steven Spielberg, George Clooney and other Hollywood glitterati were waiting at a small dinner. Recording was not allowed.

The Obama re-election campaign won't say exactly how much was raised in all these fundraisers. Estimates put the total safely north of $4 million.

But even in these pricey, glittering bubbles, the real world managed to intrude.

During a fancy breakfast at San Francisco's St. Regis Hotel, donors at one table stood up and complained in song: "We paid our dues/Where's our change?"

It was not the only time that liberal discontent broke out. On Wednesday night at the big San Francisco rally, Obama said change is tough.

"I know there are times where some of you have felt frustrated because we haven't gotten everything done as fast as we wanted," he said.

"See there. Case in point, right? All right. See, I knew I'd open up this can of worms," the president said to laughter.

Pain At The Pump

And disaffected liberals are hardly Obama's most serious problem. His approval ratings have slipped into the mid-40s.

At one private fundraiser, he suggested that if gas prices were lower, his poll numbers might be higher.

Nevada banker Lonny Thomas lends some support to that theory. Between fundraisers, the president flew to Reno, Nev., for a town hall meeting.

Thomas did not vote for the president in 2008; he feels neutral about him now; and he's very aware of the impact gas prices are having on the community.

"Some of my small-business clients who have delivery business or who rely on delivering product or whatever, it's hurting them," Thomas said. "You can see that the higher gas prices are cutting into their profit margins. They're having to adjust, lay people off or curtail certain areas of their business in order to cover the increased cost in gas."

The focus of these town hall meetings was supposed to be the president's long-term plan for cutting the deficit. But gas prices came up at every stop.

In Reno, he announced that the Justice Department will investigate fraud and manipulation in the oil and gas markets.

"I admit Secret Service doesn't let me fill up my own tank now," Obama said. "But I remember, before I was president, the last time gas prices went up this high — it's tough."

And while the presidential motorcade zooms by stations selling unleaded at more than $4 a gallon, voters are still pumping their own gas.