Accessibility links
Vatican's Easter Makes Way For Pope's Beatification The Pope's Easter Mass was the culmination of Holy Week, but the Vatican will still be busy in the coming days, preparing for next week's beatification of Pope John Paul II. Despite the festivities, criticism remains over the unprecedented speed of the process. 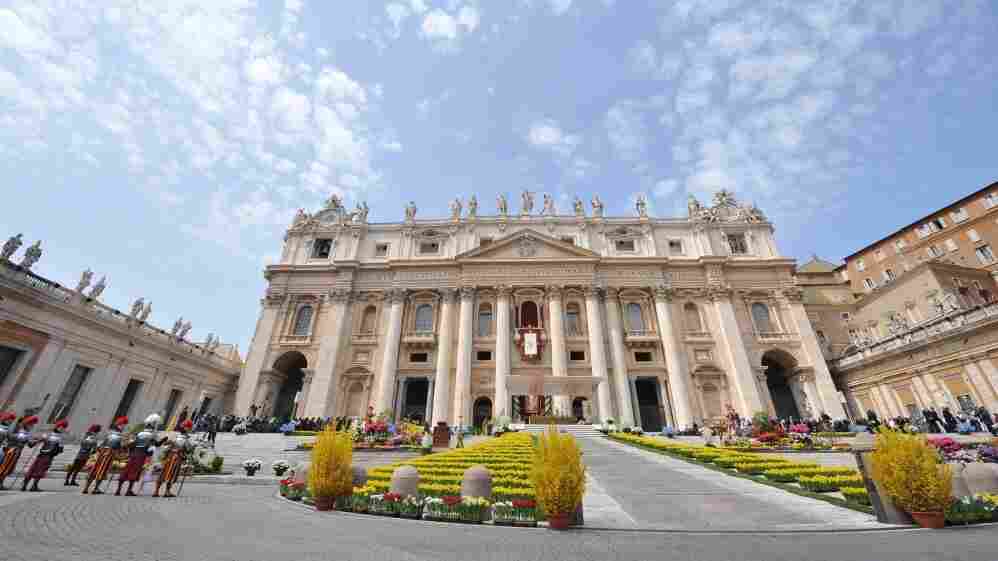 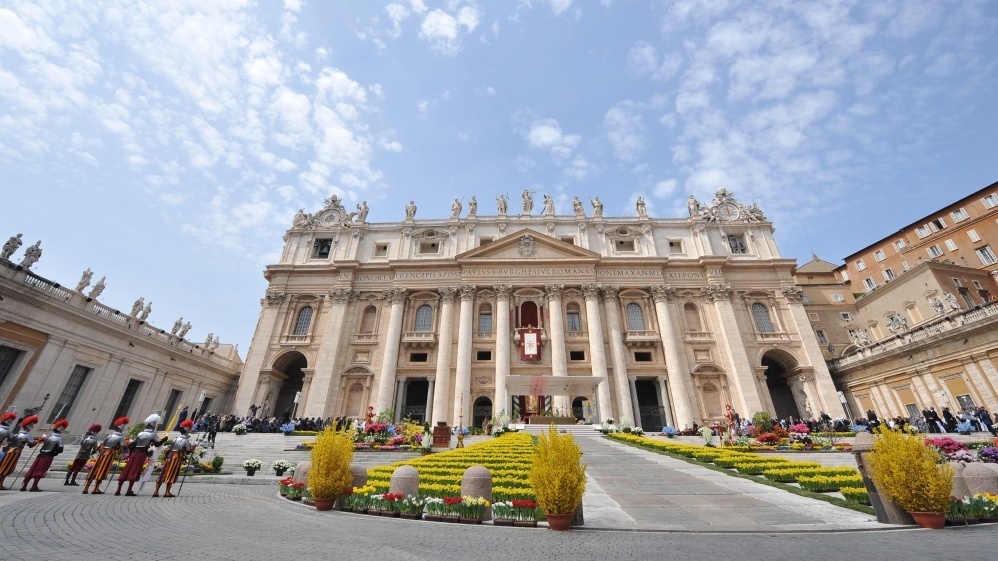 St. Peter's Square at the Vatican was resplendent for Pope Benedict's Easter message.

At the Vatican Sunday, Pope Benedict XVI focused his Easter message on the many conflicts and natural disasters that have caused suffering and destruction throughout the world. The Pope's Easter Mass was the culmination of Holy Week, but the Vatican will still be busy in the coming days, preparing for next week's beatification of Pope John Paul II.

In his Easter message, the pope appealed for diplomacy and dialogue take the place of weapons in Libya and people be given access to humanitarian aid. St. Peter's Square was resplendent as Benedict spoke, outfitted in peach blossoms, azaleas and other bright spring flowers.

The pope also called for peaceful coexistence among peoples of the Ivory Coast, rocked by violence for months. For Japan, he urged conciliation and hope in the aftermath of the recent earthquake and tsunami.

Yet the festivities aren't over, as NPR's Sylvia Poggioli tells Weekend Edition Sunday host Liane Hansen. Next week, the pope will beatify his predecessor, John Paul II — one of the steps leading to sainthood in the Catholic Church.

"It's expected to be the biggest event since John Paul's funeral six years ago," Poggioli says. The Vatican is expecting as many as a million pilgrims for the celebration. Posters with the smiling face of the Polish-born pope are everywhere, on walls and buses, and commemorative souvenirs are for sale throughout the city.

"Security, of course, will be very high," Poggioli says, "but the mood is already very festive."

John Paul II was one of the longest-serving popes in history as well as one of the major figures of the 20th century. He was the first non-Italian pope since the Renaissance, and considered a man of great faith. 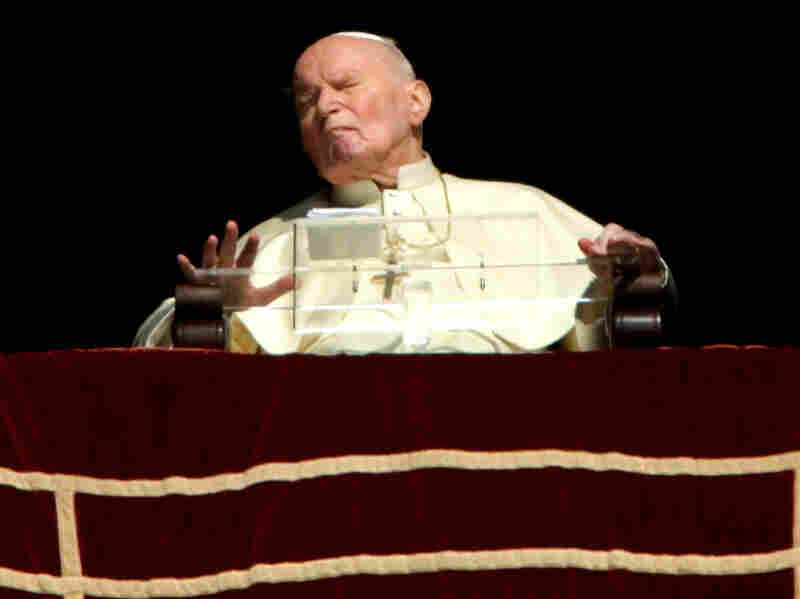 Before his death in 2005, Pope John Paul II struggled to speak during his last messages to the faithful. Vincenzo Pinto/AFP/Getty Images hide caption 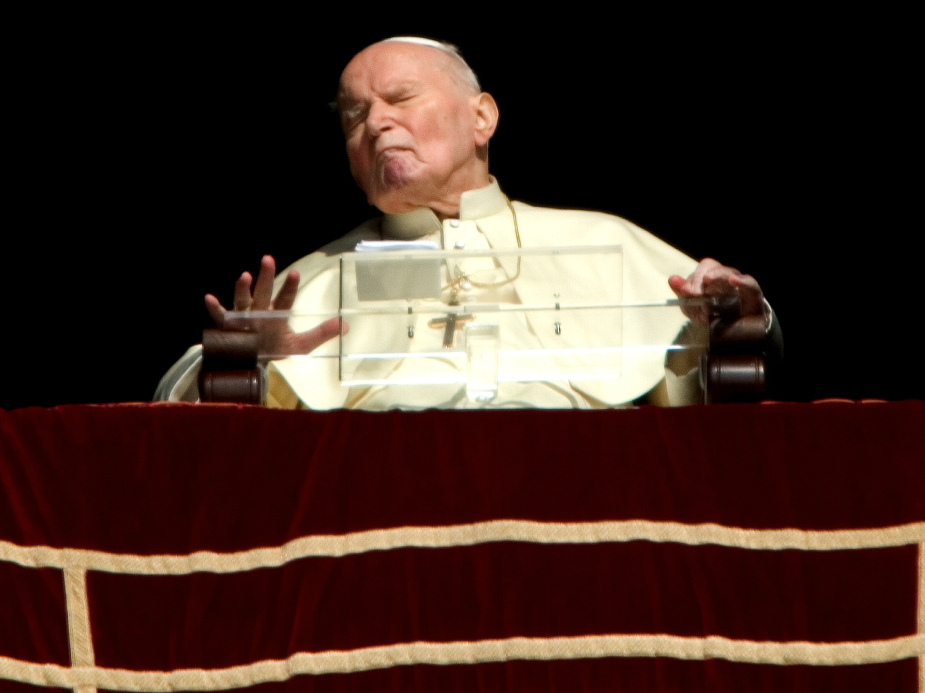 Before his death in 2005, Pope John Paul II struggled to speak during his last messages to the faithful.

A pope from the Communist East, he's seen as one of the major catalysts of the fall of communism in Europe. Another achievement, Poggioli adds, was taking the seat of Catholicism out of Rome and traveling throughout the world as a spiritual pastor.

John Paul II also championed ecumenical and interfaith dialogue, opening up channels of cooperation with other religions — including Islam. He had a particular feeling for the young, who flocked to his masses as if they were rock concerts, and he made history by formally apologizing for the sins of Catholicism over the centuries.

Even so, questions are being raised over the unprecedented speed of John Paul II's beatification process – said to be the fastest on record. Benedict suspended the traditional five-year waiting period and, Poggioli adds, this is the first time in 1,000 years that a pope has beatified his own predecessor.

Leading church historian Michael Walsh has pointed out that most of the people involved in the process — including Benedict himself — owe their jobs in some way to Paul. Thus, Walsh says, they can't be seen as impartial.

But the strongest criticism concerns John Paul II's handling of clerical sex abuse, the biggest scandal of the Catholic Church in centuries. Many of the cases that have come to light occurred on his watch, and little or nothing was done to punish abusive priests.

Even more controversial was the late pope's benevolent attitude toward the order of the Legionaries of Christ. Its founder, Mexican priest Marcial Maciel Degollado, was accused of sex abuse by many young men, but continued to enjoy the pope's favor.

The pope saw the wealthy religious order as a model of orthodoxy. "Many Vatican watchers say this was John Paul's greatest failure," Poggioli says.