Accessibility links
A Struggle To Fight Back The Sea A fierce battle is under way in the Alligator River National Wildlife Refuge in North Carolina to secure habitats that are quickly crumbling because of encroaching seas. It's these coastal areas — some of the nation's most important ecosystems — that are going to disappear as sea level continues to rise. 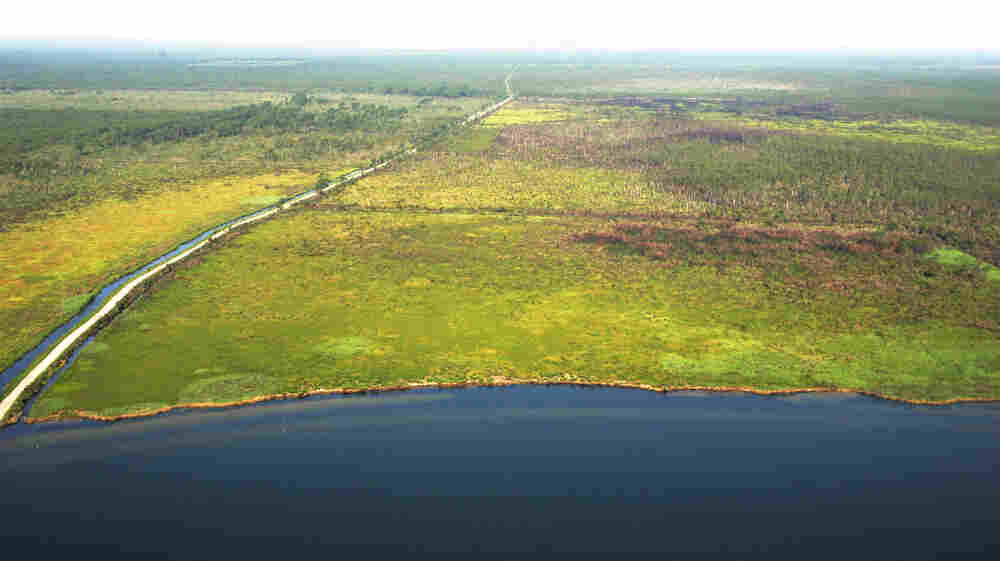 Alligator River National Wildlife Refuge is a low-lying area made of 154,000 acres of marshland and forest on the eastern shore of North Carolina. Much of the land is susceptible to sea level rise, so conservation managers are taking steps to help slow the inevitable. U.S. Fish and Wildlife Service hide caption

Some of the nation's richest and most important ecosystems lie where the ocean meets the land. It's these same coastal areas that are going to disappear as sea level continues to rise as a result of climate change.

But in one wildlife refuge in North Carolina, conservationists are attempting what would seem to be impossible: fighting back the sea.

Much of the coastal land in Alligator River National Wildlife Refuge is at or near sea level. Maps of this area show the refuge will be almost entirely submerged once sea level rises four feet. That could be within a lifetime, according to some forecasts. Explore how rising sea levels would change the shape of the coastline.

The Alligator River National Wildlife Refuge encompasses 154,000 acres of marshland and a rare type of lowland forest called pocosin. It's just about the only place on Earth where the endangered red wolf still roams, and a lot of it is at or near sea level, which means it's in big trouble as the sea rises.

But with the unbounded optimism of youth, a dozen or so college students arrived on one spring day to see what they could do.

Jamie Rowen from the University of North Carolina at Greensboro is raking oyster shells into mesh bags. They will be used to build a reef off a nearby coastline. This music major — studying classical guitar — likes the change of pace.

"My teacher told me to rest my hands this week. That's definitely not happening," Rowen says with a laugh.

His classmates happily labor nearby, on spring break.

"I feel you'll remember this over, you know, partying at the beach or something," says Elizabeth Livingston.

The bags they're filling and then stacking on wooden pallets are enough to build just a few hundred feet of reef to slow erosion along a coastline that stretches hundreds of miles. So you might ask whether these students are tilting at windmills.

After all, the sea has been encroaching here for decades. Just ask Winston "Winkie" Silver — his family home on the nearby Outer Banks has been moved six times. He relays a story from another old-timer.

"He said his grandmother could walk from Roanoke Island to the Dare County mainland by rail — which meant not a railroad train, but a rail fence-post that she would put from clump to clump, and cross over," Silver recalls. "Whether that's rocking chair history or geographic history, I don't know, but I do know if you look at the old maps, that was marsh all the way across."

Silver knows that the pond pines, which are characteristic of the pocosin coastal forest, are also losing ground to the ocean.

"The stumps [are] out there in the shallow water," he says, and "if you bring your boat in there and tear your boat up, you know that once was tree-lined and land." 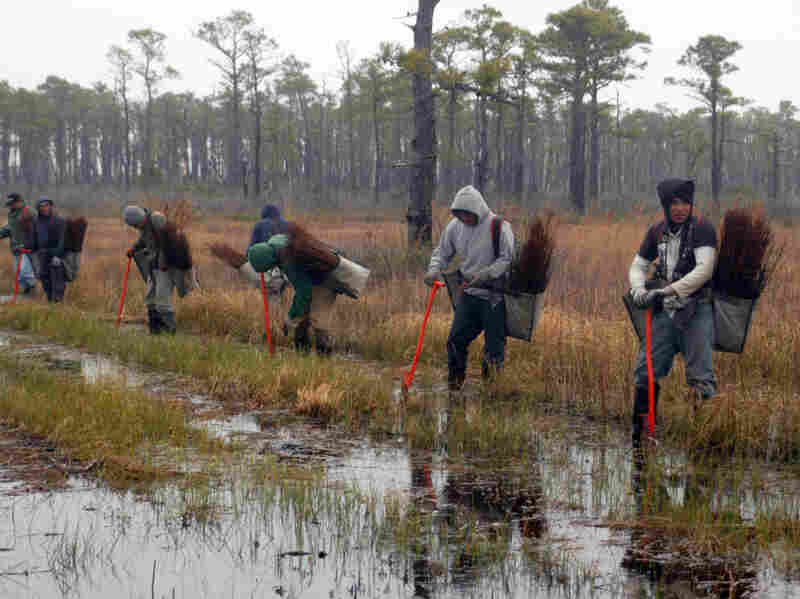 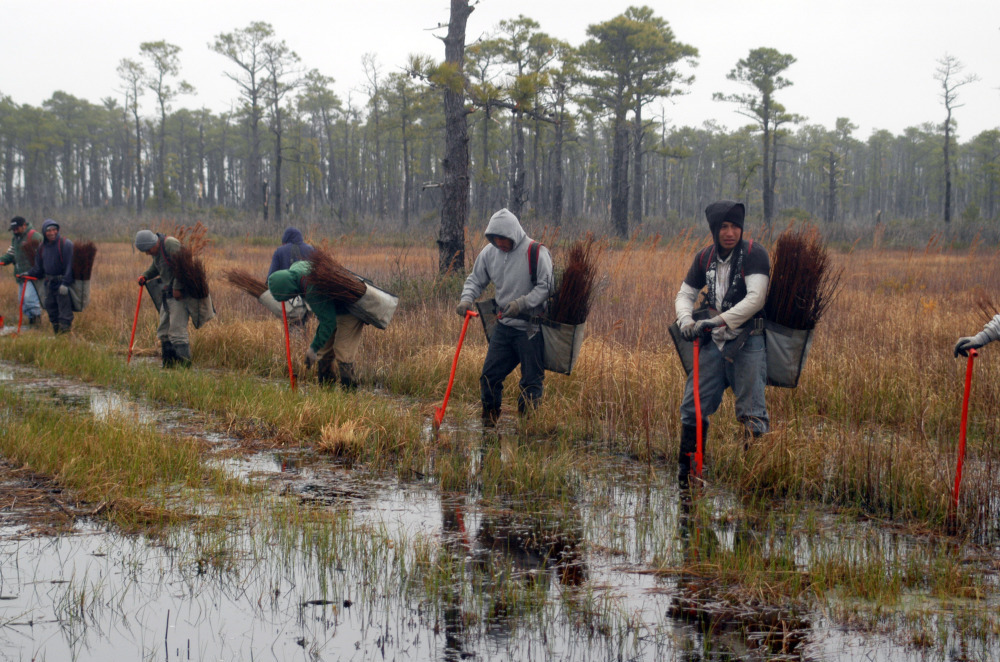 The Nature Conservancy has planted more than 20,000 cypress saplings in an experiment to see if they can help create a forest which would be home to red wolves, bobcats, black bears and other animals whose habitat is quickly disappearing.

Silver wears a homemade visor to keep the sun off his ears. He's been hired to use his barges to build the reef out of these bags of shells. And though the work is taking place on a federal wildlife refuge, the effort is actually being led by Brian Boutin, a scientist from the Nature Conservancy.

Boutin starts out in his pickup truck toward Point Peter, where the reef is being built. On the way, he explains the reef is just one part of a larger plan to preserve the refuge. We pull over along the side of the gravel road to see another element of the plan.

The eager, young biologist slips on his rubber boots and heads off into a wide expanse of marsh, typical of the refuge. Water comes up the sides of our shoes — you can't get any closer to sea level than this. About 100 yards off the road, he points proudly to a bare twig coming out of the sodden soil. It's a freshly planted cypress tree.

Like the college students, this twig of a tree also seems to radiate hopefulness.

"Once these leaf-out this spring here, we'll have a nice lime-green veneer across the top of all this marsh grass out here, so it will be pretty evident how many cypress are in this area," Boutin says.

The experiment is designed to see whether the 20,000 cedar trees they've planted can help create forest, which is home to the red wolf, black bear, bobcats and other animals whose habitat is gradually disappearing. Of course, if the sea keeps rising, the trees could simply find themselves drowned in saltwater; Boutin has been thinking about that a lot.

Adapting The Landscape To Change

Soon after we return to the road, we come across a refuge construction crew, installing a new culvert. Surprisingly, the goal of this project is to bring more water into the marsh where the trees are growing. Boutin explains that the hope is this fresh water will build up organic soil here by encouraging the plants that produce it.

"Part of the soil condition those species need is to have a damp soil," he says. So even though it may seem counterintuitive to bring in water to stave off sea-level rise, wetland species need to be wet. The soils here used to be fed by sediments flowing down the nearby rivers. But that sediment is no longer making its way to the marsh, thanks to dams and channels. That means the plants here are the main source of soil, and they don't build it up very fast — just a few millimeters a year.

Unfortunately, sea level is rising at the rate of 3 or 4 millimeters a year here, and that rate is forecast to grow.

"We are not quite keeping up with sea level rise, and I think that's going to be the case pretty much everywhere we work with in Pamlico Sound," Boutin says. "But the idea is to reduce the rate of loss." 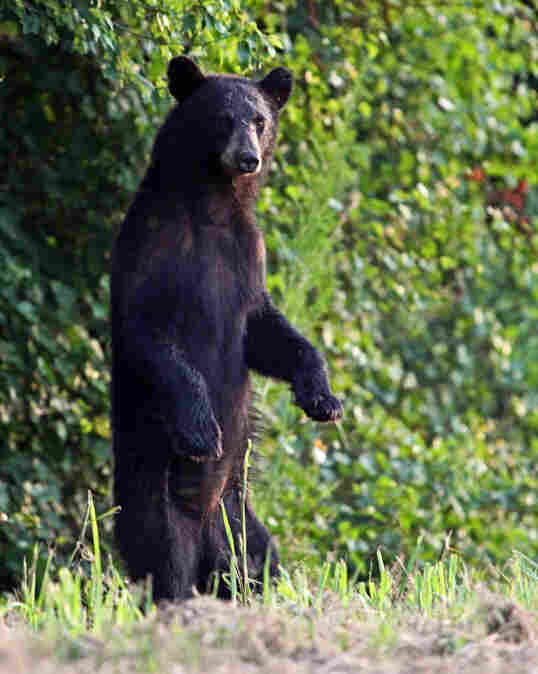 Rising seas mean habitats for animals like this black bear may become threatened. "We'd like to think about where is the next best place for wildlife on higher ground," says Mike Bryant, who runs the Alligator River National Wildlife Refuge for the U.S. Fish and Wildlife Service. "How do we have wildlife corridors between Alligator River refuge and those lands?" Jeff Lewis hide caption 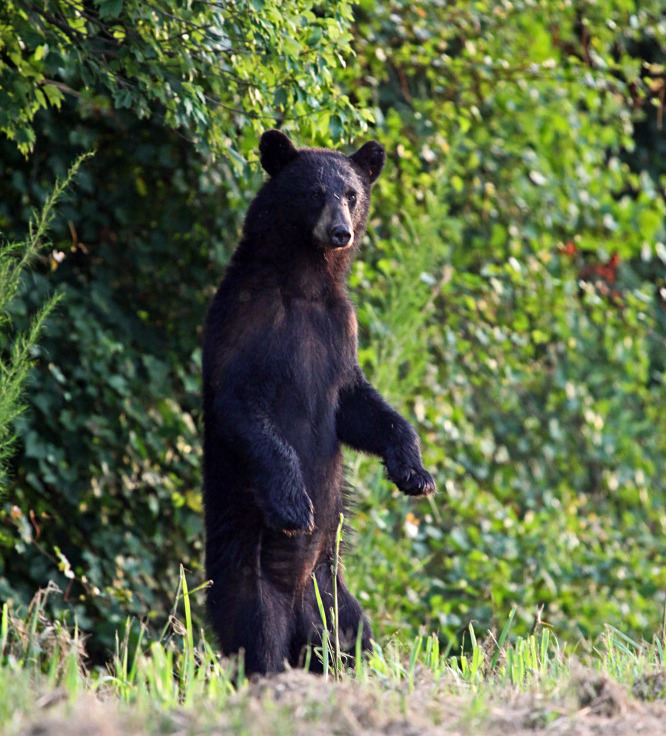 Rising seas mean habitats for animals like this black bear may become threatened. "We'd like to think about where is the next best place for wildlife on higher ground," says Mike Bryant, who runs the Alligator River National Wildlife Refuge for the U.S. Fish and Wildlife Service. "How do we have wildlife corridors between Alligator River refuge and those lands?"

Losing the battle — but losing it slowly — makes perfect sense to Mike Bryant, who runs this refuge for the U.S. Fish and Wildlife Service.

"We expect change from sea level rise as a consequence of the warming and the melting of ice," Bryant says. "And as that sea level rises, we expect to lose land." The future of this reserve doesn't look bright: "I don't know if it's doomed, but I certainly think it's shrinking."

Eventually, the maps of this area show this refuge will be almost entirely submerged once sea level rises four feet. That could be within a lifetime, according to some forecasts.

But Bryant says change is inevitable on planet Earth. And he can at least help the ecosystems adapt with some grace.

"I don't think we can we can put a dike around a 150,000-acre refuge and pump it out," he says. "So I think we just have to adapt that landscape to the change."

That means fighting back the tide in the short run, but it also means thinking ahead.

Focusing On The Vulnerable Areas

While Bryant starts the delicate task of buying or getting wildlife easements on neighboring land, Boutin is trying to buy time.

When we arrive at Point Peter, a gale is blowing up in the fetch between us and the Outer Banks off to the east.

"So what you see is we're standing in front of an unprotected area," Boutin says. "And you can see how much wave action is coming in and pounding the shore, and what the size of the waves are here." 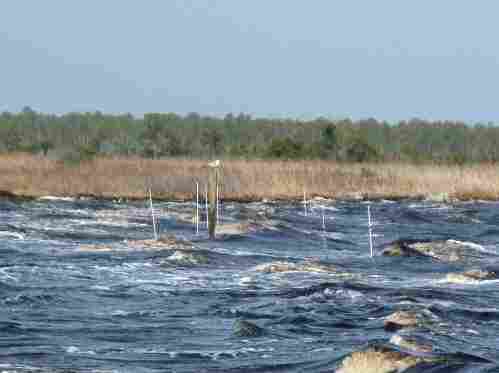 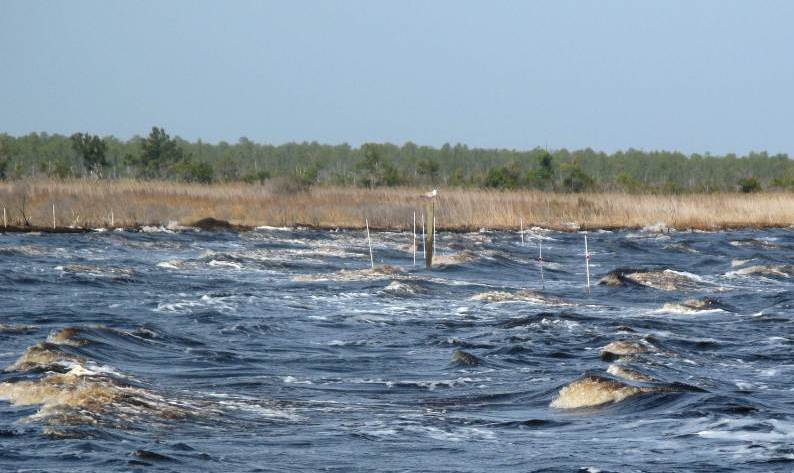 White posts planted just offshore mark where artificial reefs have been built from bags of oyster shells. Managers are installing these reefs in the areas facing the strongest shoreline erosion.

These churning whitecaps are eating away parts of Point Peter at the rate of 30 feet a year, he says. But then he points to some white pipes sticking out of the water to our left. That's where Winkie Silver has been stacking bags of oyster shells in the water. Boutin says the marsh behind that reef is eroding at a much slower rate.

But he knows he can't protect very much of this coast with labor-intensive reefs.

"We are focusing on finding those areas that are most vulnerable right now and that are most in need of having their shoreline erosion addressed," he says.

It's not a permanent solution, but in the process, they're learning what works — and what doesn't work — in their struggle to fight back the sea.