Accessibility links
Dr. Emery Brown: The Fresh Air Interview - 'What Happens In Your Brain During Anesthesia' Anesthesiologist Emery Brown explains what physicians know — and what they don't know — about the effects of anesthesia. Unlocking its mysteries, he says, will help scientists better understand consciousness and sleep — and could lead to better treatments for pain, sleep disorders and depression. 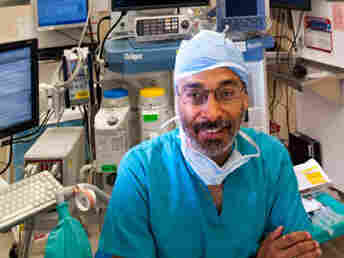 Emery Brown is a professor of computational neuroscience and health sciences and technology, with a joint appointment at MIT and Harvard University. He is also a professor of anesthesia at Harvard Medical School. MIT hide caption

If you've gone in for surgery, it's likely that your anesthesiologist has told you to count backward from 100 — and that you'll wake up after a nice deep sleep.

But that's not exactly true.

"Sleep is not the state you're going in, nor would it be the state in which someone could perform an operation on you," explains Dr. Emery Brown. "What we need to do in order to be able to operate on you — to perform a procedure which is, indeed, very invasive — is to put you in a state which is effectively a coma which we can readily reverse."

Brown, a professor of anesthesia at Harvard Medical School and a practicing anesthesiologist at Massachusetts General Hospital, recently co-authored a study in The New England Journal of Medicine outlining what scientists know and don't know about anesthesia. Unlocking its many mysteries, he says, will help scientists better understand consciousness and sleep — and could lead to new treatments for pain, depression and sleep disorders.

Anesthesia And The Brain

One of medicine's biggest questions is how anesthesia — which knocks patients unconscious, renders them immune to pain and keeps them immobile during procedures — actually works in the brain. Brown's team has been conducting imaging studies on volunteers under anesthesia to see how different parts of the brains change activity levels as the volunteers lose and then regain consciousness.

From 'The New England Journal of Medicine'

"We would like to understand, when the drugs are given, what areas are turned off and turned on in what sequence to get some sense of how the drugs work," Brown tells Fresh Air's Terry Gross. "We know a lot about the properties of the drugs — in terms of how they're metabolized by the body and certain behavioral effects they might have. We also know a lot about certain receptors they bind to, but these receptors are all over the brain and central nervous system. But the state of anesthesia is this very complex behavioral state. So to decipher it, we are at first order using the imaging where it is happening. Then, from there, we can start asking other questions: Is this the way we want to do it? Are there other ways to achieve the same state which might be better for our patients?"

So far, researchers have learned that different drugs create different patterns in the brain, Brown says. For example, propofol — one of the most widely used anesthetics — is a very potent drug and initially puts the brain into a state of excitation.

"It doesn't really cause a state of sedation or anesthesia [initially]," Brown says. "Then what we actually see next is the brain start to slow. [So first you see] a period where the brain is active, and then [when you give] a higher dose, the brain starts to slow."

In contrast, the drug ketamine — which is used in conjunction with anesthesia to make certain drugs work better — puts the brain into a state of excitation even at higher doses.

"The state of unconsciousness you get with ketamine is created by making the brain active," Brown says. "As you transition through this active state, you very frequently hallucinate. It's this hallucination or sense of euphoria or dissociative state that people who are using it as a drug of abuse are seeking."

Depression And The Brain

Recent studies conducted by scientists at the National Institute of Mental Health have indicated that administering extremely low doses of ketamine can help treat patients with chronic depression. Brown says he is excited by these findings.

"If this turns out to be reproducible, it could change tremendously how chronic depression is managed," Brown says. "For 70 to 80 percent of patients [in the study who received low doses of ketamine], they felt better almost immediately. This is an exciting finding, because right now there is no way to make a chronically depressed patient feel better immediately. So this is an exciting finding, and if it's shown to hold, I think it may change tremendously the way chronic depression is treated."

Dr. Emery Brown talks about anesthesia as a neuroscience phenomenon.

"It has five components. You're supposed to be unconscious. You're not supposed to have pain. You're not supposed to remember. And we want you to not move while someone is operating on you. And we want you to be stable physiologically — stable heart rate, stable blood pressure, temperature, breathing. The anesthesiologist takes over the physiology of the patient and controls it for the duration of the time that the patient is having surgery. Then by titrating very carefully the way the medications are given, when the surgery is over, we can reverse the coma."

On waking up during surgery

"Does it happen, despite our best efforts sometimes? Yes, I think that's the case. What typically happens more predictably is usually in emergency settings — someone who is coming in to have an emergency cesarean section, and there is concern about how to titrate the level of anesthesia so you can take care of mother as well as the baby. Or another case is someone comes in with massive trauma from a car accident, maybe a gunshot wound. And again, you're trying to balance the side effects of the anesthetic on the heart and lungs against trying to give the person appropriate levels of anesthetic so he or she can tolerate the surgery that's necessary. There's one situation historically where there had been a fair amount of recall or awareness under anesthesia, and that was with heart surgery, because up until a few years ago, it was done primarily using large doses of opioids. Even though patients were quite comfortable and there was no evidence of stress overtly, they'd report having recall or having been aware of parts of the surgery."

On having his patients count down from 100 before surgery

"I've been using it to demonstrate to the residents how quickly people lose consciousness under anesthesia and to give them a sense of how profoundly it occurs. So it sounds like something you see in the movies, but I actually do it because it's fairly impressive. People rarely get beyond 90. ... You get a sense of how the drugs are affecting the brain. Some people start counting 100, 99, 98, 97 um, um, 95, 94, 90. So they'll stop remembering. If you think about it, we think of counting as a very simple process, but it's actually fairly complex because you have to remember what you just said and then remember what the next number in sequence is."