Accessibility links
Got Knee Pain? Maybe The Answer Is More Exercise A reporter thought that Achilles tendon and knee injuries from running might mean he'd never be able to enjoy the sport again. It turns out that the pain may have been from lack of use. But stretching and strengthening exercises can reverse that decline. 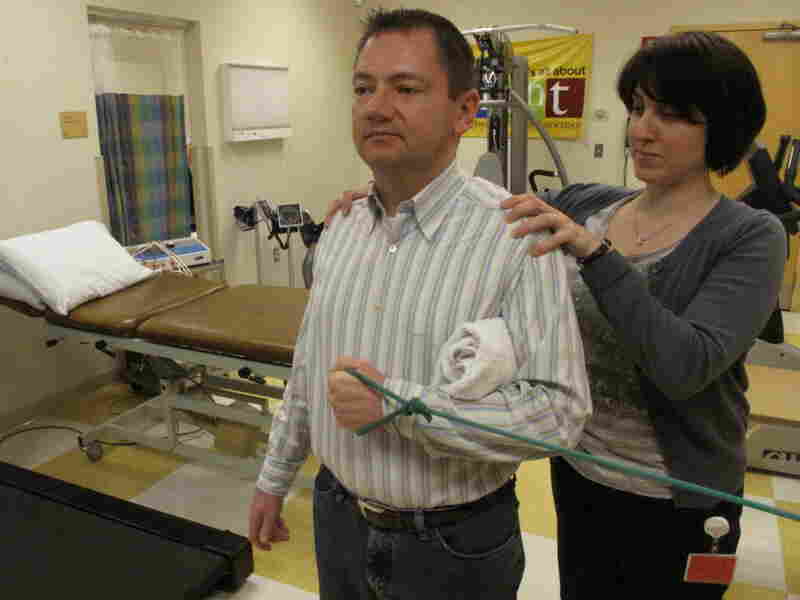 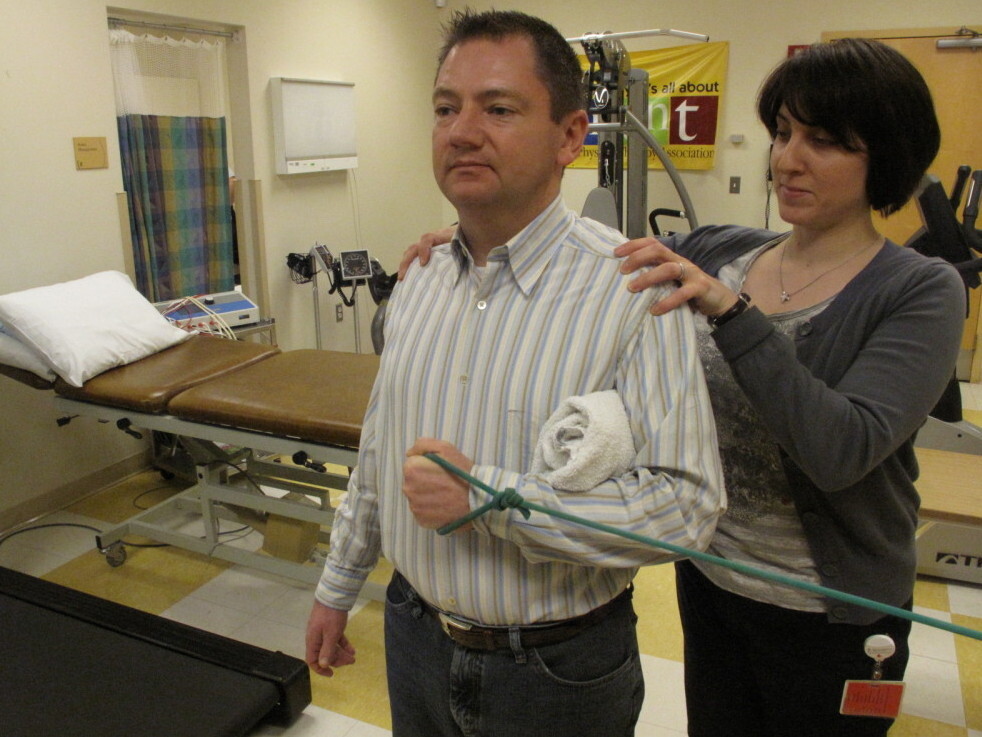 Like millions of baby boomers, I've always thought I'd stay active into my later years. That's unlike many in my parents' generation who gave up hiking, biking, running, kayaking and other strenuous pursuits (if they ever did these things in the first place) when they developed aches and pains.

So the last six months have been discouraging. First, there was a painful left Achilles tendon. That was brought on by a gentle two-mile run — after not running for a long time due to bone spur pain that took a year to go away.

"We're going to get you running again," she said. (I loved her use of the first-person plural.)

A Slippery Slope To Knee Replacement?

Quinn wrote a prescription for two months of physical therapy. That worked. No more Achilles pain. So with the coming of spring, I was all set to get out there again — carefully, this time.

And then the knee pains started. Suddenly, going up and down stairs hurt. So did the simple act of sitting down and standing up.

Serious bummer. Hard not to think, "Is this the beginning of old age? A slide down the slope toward knee replacement?" 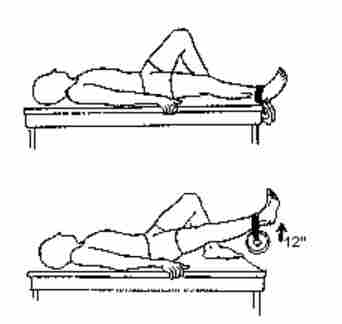 An exercise prescribed to Richard Knox: Lying on a table with a straight leg, lift the affected leg to strengthen the quadricep muscle using ankle weights. For more information, see the Nicholas Institute of Sports Medicine and Athletic Trauma. NISMAT hide caption

"One thing about your history that's very telling," Quinn says, "is this all started after a period of inactivity. Your tissues, when you're not active, get tight and weak. And this can predispose you to this condition, called chondromalacia of the patella."

Basically, it means irritation of the cartilage lining the kneecap. My kneecaps weren't tracking in their grooves the way they're supposed to.

Quinn says it's the most common knee problem she sees. It can result from either overuse or underuse. In my case, it's clearly the latter.

"The good news is you don't need surgery for this," Quinn says. "This is something you can help manage."

A Prescription For 'Aggressive Flexibility'

Once again, she prescribes physical therapy. It will focus not on the knee itself but on the hip, the abdomen, the back, the glutes and the quadriceps muscles. All are important in getting the kneecap to track properly.

Flexibility is key, she says. I'll need what she calls a "really aggressive flexibility program" to loosen up my leg muscles.

And the prognosis? "I would suspect that in the next six to eight weeks, you're going to be back on a good running program," Quinn predicts.

This is great news. I never thought I'd be able to run again.

Next stop is a physical therapy clinic and an appointment with a peppy, can-do therapist named Popi Gianakouras. When I met her, she was working with a 45-year-old bank employee named Bob Rothaker.

Like many of Gianakouras' patients, Rothaker spends hours at his desk, staring at a computer screen. His terrible posture, she says, was causing him a lot of problems.

"By the afternoon, it was really painful," Rothaker says. "From the upper back it would migrate to the chest area and then the shoulder area." He had tension headaches, too.

Making Over The Muscles

But seven weeks of physical therapy have made a big difference. "It's great! I'm almost symptom-free now," he reports. "It's been a tremendous help."

Gianakouras examines me and agrees with Quinn that my problem is not just in my knees.

"It's actually the mechanics of the entire lower extremities, from your core all the way down to your feet," she pronounces. "And you have to address all of those things in order to correct the problem."

She prescribes a program of exercises designed to stretch and strengthen half the muscles in my body, it seems.

It's actually not as bad as it sounds. The routine takes about an hour a day — not necessarily all at once. But I've got to be faithful about it, and so far, I have been. In only a week, it's making a difference. Going downstairs doesn't hurt so much.

Gianakouras says a lot of her patients are like me. We're pretty sedentary in our everyday lives, but nevertheless expect to stay active.

As my knees can tell you, that doesn't work.