Accessibility links
Taliban Help Nearly 500 Flee From Afghan Prison Afghan officials say the inmates escaped from the main prison in Kandahar city through a tunnel about 1,000 feet long. They say many of the men who dug the tunnel out of the facility were Taliban insurgents. 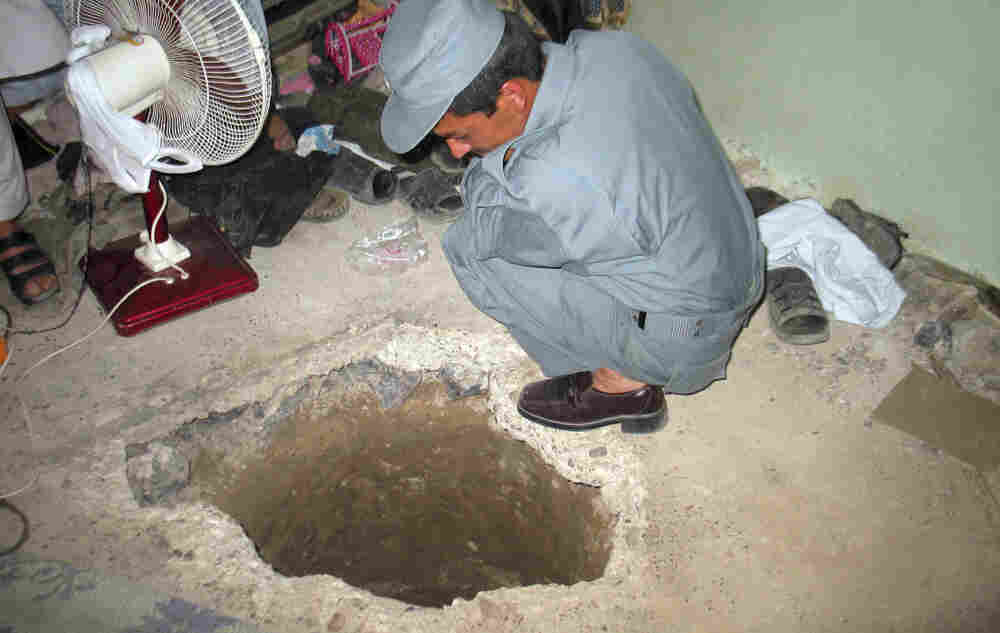 An Afghan policemen peers into the opening of a tunnel at the Sarposa prison in Kandahar city. More than 480 inmates used the 1,000-foot tunnel to escape in a prison break that began late Sunday and early Monday. Allauddin Khan/AP hide caption 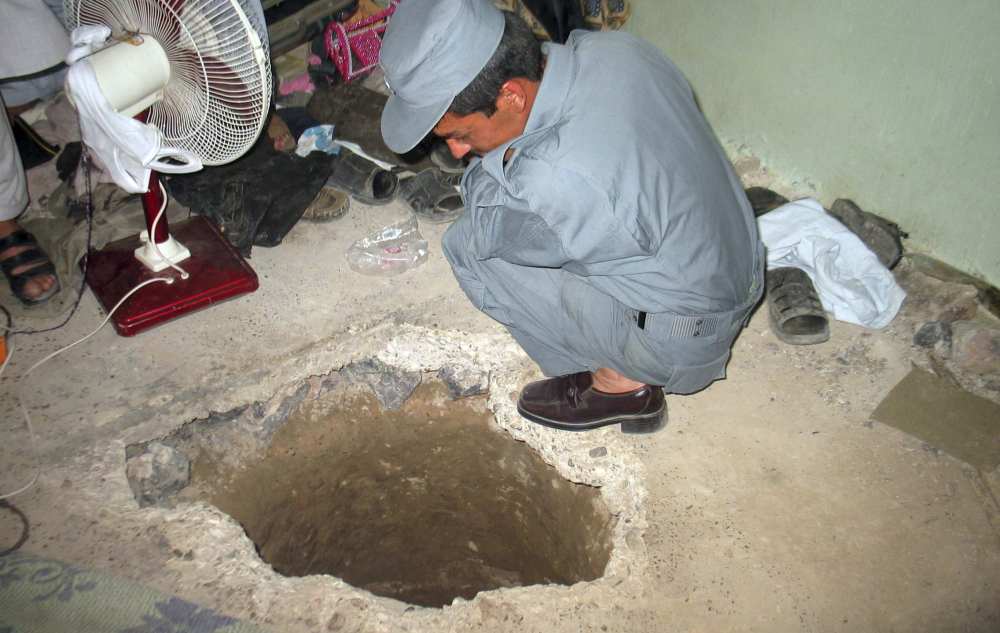 An Afghan policemen peers into the opening of a tunnel at the Sarposa prison in Kandahar city. More than 480 inmates used the 1,000-foot tunnel to escape in a prison break that began late Sunday and early Monday.

The diggers finally poked through a concrete floor at Sarposa prison in Kandahar city Sunday and spent 4 1/2 hours ferrying away nearly 500 inmates without a shot being fired, according to the Taliban and Afghan officials. Most of the prisoners were Taliban militants.

A Taliban spokesman, contacted by phone, bragged that the jailbreak was an unqualified success, emptying out the section that holds political prisoners. While the Taliban often exaggerate their claims, this time their propaganda wing announced the breakout before Afghan government authorities even seemed to be aware the prisoners were gone.

The spokesman, Zaibullah Mujahid, said the Taliban had suicide bombers standing by to divert the guards' attention, but the tactic proved unnecessary. He said the prisoners — including more than 100 Taliban commanders — began moving out through the tunnel at 11 p.m. local time and finished at about 3 in the morning.

The tunnel passed underneath the main Kandahar-Kabul highway to a house at the other end.

NATO officials declined to comment about how many of the escapees are considered Taliban leaders, but Afghan officials are concerned that many seasoned fighters may now return to the war. Since last summer's American troop surge into Southern Afghanistan, hundreds of Taliban fighters and commanders have been killed or captured. Most of them are turned over to Afghan authorities and kept in prisons such as the one in Kandahar.

The highest-profile Taliban inmates would most likely not be held at the 1,200-inmate Sarposa prison. The U.S. keeps detainees it considers a threat at a facility outside Bagram Air Base in eastern Afghanistan. Other key Taliban prisoners are held by the Afghan government in a high-security wing of the main prison in Kabul.

Pentagon spokesman Col. Dave Lapan told The Associated Press that the military command in Afghanistan had "not been asked by the Afghans to provide any assistance" such as intelligence help in looking for the escaped inmates.

"This is a blow," Omar said. "A prison break of this magnitude of course points to vulnerability and we need to accept this, what made this incident of this magnitude to happen. We'll come back with more details as to what exactly happened and what we're doing to correct it."

But the Afghan government has tried to fix the problems at Kandahar's prison before, notably after a June 2008 jailbreak. Then it was a Taliban truck bomb that breached the walls, and allowed about 1,000 prisoners to run free. Both the Canadian and U.S. military assisted in refitting the prison with new guard towers, prison cell doors and gates to prevent any future car bomb from getting close to the prison walls.

Accounts of the latest prison break, carried out in the dead of night, suggest collusion with prison guards, officials or both.

There are guard towers at each corner of the prison compound, which is illuminated at night and protected by a ring of concrete barriers topped with razor wire. The entrance can be reached only by passing through multiple checkpoints and gates.

Government officials corroborated parts of the Taliban account of the escape. They confirmed the tunnel was dug from a house within shooting distance of the prison and that the inmates had somehow gotten out of their locked cells and disappeared into the night. Kandahar remains relatively warm even during winter and the ground would not have frozen while insurgents were digging the tunnel.

Police showed reporters the roughly hewn hole that was punched through the concrete floor of the prison cell. The opening was about 3 feet in diameter, and the tunnel dropped straight down for about 5 feet and then turned in the direction of the house where it originated.

But access was denied to the tunnel itself, and it was unclear how the Taliban were able to move so many men out of the prison so quickly. Also unclear was why guards would not have heard the diggers punch through the concrete floor, and whether they supervise the inside of the perimeters at night.

A man who claimed he helped organize those inside the prison told the AP by phone that he and his accomplices obtained copies of the keys for the cells ahead of time from "friends." He did not say who those friends were.

"There were four or five of us who knew that our friends were digging a tunnel from the outside," said Mohammad Abdullah, who said he had been in Sarposa prison for two years after being captured in nearby Zhari district with a stockpile of weapons. "Some of our friends helped us by providing copies of the keys. When the time came at night, we managed to open the doors for friends who were in other rooms."

Abdullah said the diggers broke through Sunday morning and that the inmates in the cell covered the hole with a prayer rug until the middle of the night, when they started quietly opening the doors of cells and ushering prisoners in small groups into the tunnel.

He said they woke the inmates up four or five at a time to sneak them out quietly. They also didn't want too many people crawling through the narrow and damp tunnel at one time because of worries that they would run out of oxygen, Abdullah said.

The AP reached Abdullah on a phone number supplied by a Taliban spokesman. His account could not immediately be verified.

The Taliban statement said it took 4 1/2 hours for all the prisoners to clear the tunnel, with the final inmates emerging into the house at 3:30 a.m. They then used a number of vehicles to shuttle the escaped convicts to secure locations.

Reporters were not allowed into that building, but officials pointed out the mud-walled compound with a brown gate and shops on either side.

Asked if the incident would prompt a rethinking or delay in the planned June turnover of the Parwan detention operation in the east to Afghans, Lapan said: "I think it's still too soon to tell. I have not gotten any indications of that, but it's too soon to tell."

The Kandahar escape is the latest in a series of high-profile Taliban operations that show the insurgency is fighting back. Over the past year, tens of thousands of U.S. and NATO reinforcements routed the Taliban from many of their southern strongholds, captured leading figures and destroyed weapons caches.

The militants have responded with major attacks across the nation as the spring fighting season has kicked off. In the past two weeks, Taliban agents have launched attacks from inside the Defense Ministry, a Kandahar city police station and a shared Afghan-U.S. military base in the east. In neighboring Helmand province on Saturday, a gunman assassinated the former top civilian chief of Marjah district. That's where U.S. Marines started the renewed push into the south early last year.

NPR's Quil Lawrence reported from Kabul for this story, which contains material from The Associated Press