Accessibility links
The 'Clash' At Marathon Shaped Greece, And The West Military historian Jim Lacey says the battle of Marathon, where the vastly outnumbered Greeks defeated the Persian army, had a profound impact on Western civilization, and opened an East-West political and cultural divide that shaped the ancient and modern worlds. 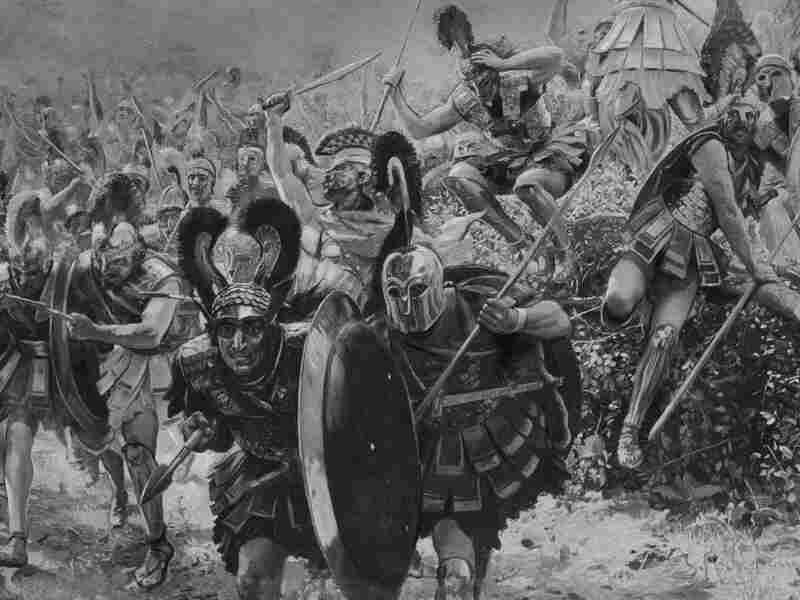 Greek warriors advancing on Persian troops at the Battle of Marathon in 490 B.C., depicted in a painting by Georges Antoine Rochegrosse. Hulton Archive/Getty Images hide caption 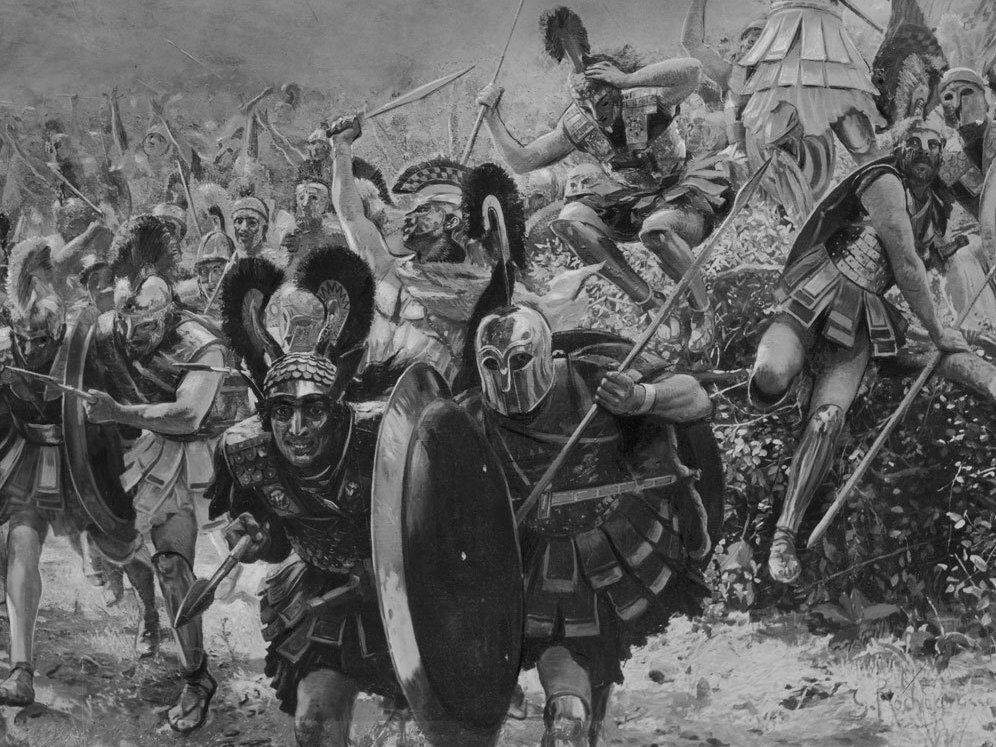 Greek warriors advancing on Persian troops at the Battle of Marathon in 490 B.C., depicted in a painting by Georges Antoine Rochegrosse.

At the start of the fifth century B.C., the Persian empire was the world's paramount power, stretching from the Mediterranean Sea to North Africa to the Indian subcontinent. But the Persian emperor, King Darius, did not control Athens — and defeating its much smaller army seemed a relatively small matter.

In September of 490 B.C., Persian troops advanced on 10,000 vastly outnumbered Greek soldiers on the Plain of Marathon. But the Greeks managed to crush the Persian army that day and, as the story goes, ran all the way home to preserve their victory.

Scholars have recounted the battle of Marathon for centuries, hailing it as one of the most pivotal battles in world history. And had the Athenians lost that day, as retired Marine and military historian Jim Lacey argues in The First Clash: The Miraculous Greek Victory at Marathon and Its Impact on Western Civilization, the world would look dramatically different today. 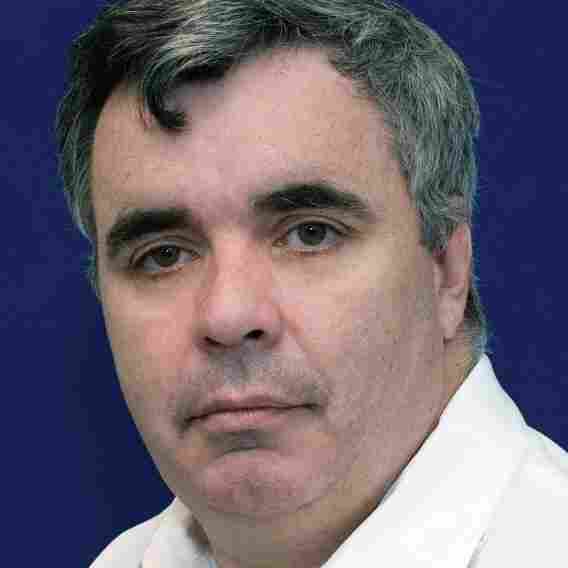 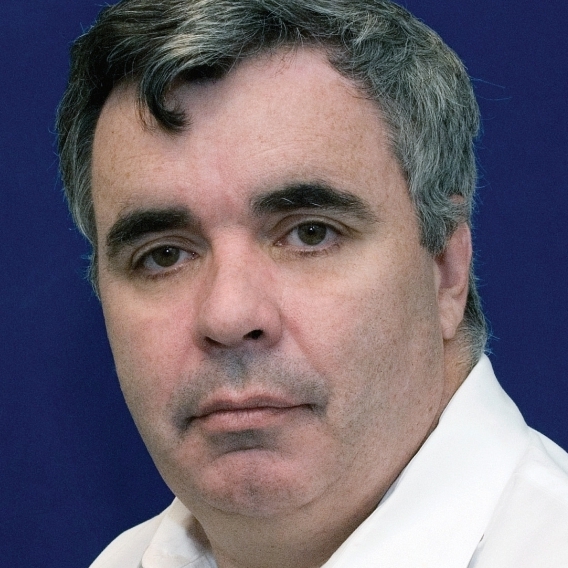 Jim Lacey, a retired U.S. Marines officer, is now a professor of strategy, war and policy at the Marine War College.

The Persian empire "was probably not as bad as some empires or some tyrannies," Lacey tells NPR's Neal Conan. "But it was not conducive to the creation of democratic institutions or a market economic system. In fact," Lacey continues, Cyrus the Great, "the founder of the Persian empire, held both in contempt. He said as much when he found out how the Greeks governed themselves and how they traded."

That early democratic ideals had developed in Greece at all, Lacey says, "is pretty much a miracle in itself." Greeks had established the right to vote — albeit for a limited population — and created an "ancient equivalent of a middle-class system" through land redistribution.

A Persian victory, Lacey says, would have transformed the entire structure of Greek society, trampling the "flowering of Greek culture, Greek civilization, that fed right into the Roman civilization," ultimately forming the basis of Western political philosophy. 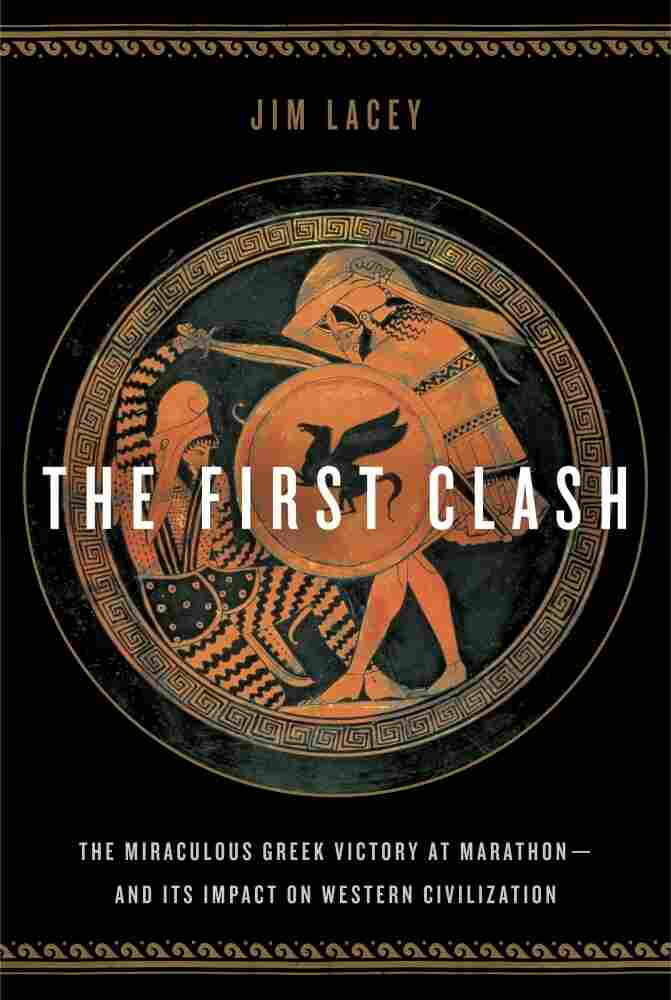 The First Clash: The Miraculous Greek Victory at Marathon and Its Impact on Western Civilization
By Jim Lacey
Hardcover, 272 pages
Bantam
List price: $26

THE MOMENT OF BATTLE

At the dawn of the fifth century BC, Persia stood triumphant. For over five decades, her warriors had crushed all who opposed them. In that time, no city had ever withstood a Persian siege, and all the armies of the known world's most powerful civilizations had met their ruin trying to halt Persia's inexorable march of conquest. On their near invincible warriors, Persian kings built the world's first global empire, stretching from the Mediterranean Sea to India, destroying, in the process, a dozen smaller empires and absorbing the people of a hundred races.

In 490 BC, the mighty Persian king Darius looked west, toward two insignificant Greek city-states that had insulted his empire. Tiny Sparta had sent emissaries to the Persian capital warning the "Great King" to cease his attacks on the Greek cities in Asia; more insulting, Athens had summoned the audacity to send troops onto Persian soil and to burn a Persian city, Sardis, before scurrying home to safety. Tiring of the insults, King Darius sent emissaries to Athens and Sparta demanding the gifts of submission — earth and water. In answer, the Spartans threw the king's messengers into a well and told them to help themselves to all the earth and water they desired, while the Athenians simply put the messengers to the sword.

Enraged, Darius ordered his army to destroy Athens and to enslave the survivors. However, trouble within the empire forced Darius to delay retribution. Eight years after Athens had reduced Sardis to ashes, the dreaded Persian army finally arrived in Greece and mustered its strength on the Plain of Marathon, a scant two dozen miles from Athens. For nine days, ten thousand Athenian hoplites watched the Persian army prepare for battle and wondered how they would be able to resist an army of professional warriors three times their number. Some prayed for the gods to intervene, while others hoped the Persians would delay just a day or two longer. For every Athenian present at Marathon knew that the Spartan army, boasting the best warriors in the world, was marching hard to their aid.

On September 12, 490 BC, the waiting ended. The Persians were moving, and Athens, in mortal danger, could wait no longer. Spartans or no Spartans, Athenian commanders prepared to attack. Before dawn, ten thousand hoplites formed up in columns and waited for the trumpets to signal the order to advance. Eight men deep on the flanks and four deep in the center, the phalanx of bristling spear points and blazing shields began its slow, inexorable march toward the enemy. At first, the Persians could not believe their eyes and wondered how such a meager force could ever hope to break their lines. Some thought it was just a demonstration and would be followed by a hasty retreat. Others simply thought the Greeks mad.

The Athenian hoplites began to pick up the pace, first to a fast walk and then to a trot. The hoplites crushed together, shoulder to shoulder and shield to shield, as each tried to cover as much of his exposed right side behind his neighbor's shield as possible. Dread and fear melted away now that the army was advancing. Men who had soiled themselves in the line drew strength from the surging men surrounding them. At six hundred yards' distance, the mass of men began to scream their fierce and nerve-shattering battle cry: Alleeee!

Hastily, the Persian commanders aligned their troops. Men holding wicker shields went to the front as thousands of archers arrayed themselves behind them. The Persian army showed no panic. They were professional soldiers, victors of a hundred bloody battles. In another moment, the archers would release tens of thousands of deadly bolts into the sky. The spearmen would wait for the arrows to decimate their foe and then advance to slaughter the shattered remnant.

But the Persians had never before faced an army like this one. Athenian hoplites learned the art of war against other hoplites, and their kind of war was not decided by a hail of arrows. It was settled by a collision of wooden shields and deadly iron-tipped spears, wielded by heavily armored men. It was a horrible and terrifying confrontation of pushing, screaming, half-crazed men who gouged, stabbed, and kicked at their opponents until one side could bear the agony no longer and broke. The victors would then launch a murderous pursuit of their defeated foes as the bloodlust propelled them forward.

This was the kind of war charging down on the Persians, and it arrived at almost incomprehensible speed, for at two hundred yards' distance the Athenian trot became a sprint. Finally, the Persian archers let fly, but to no effect. Never having seen such a rapid advance, they mistimed their shots and most of the arrows flew harmlessly over the charging hoplites. Hastily, the archers reloaded and the shield bearers uneasily began inching backward as ten thousand metal-encased killers were almost upon them.

In a shuddering instant, hoplites smashed into the lightly protected Persians and convulsed their defensive line. Then the killing began.

From The First Clash: The Miraculous Greek Victory at Marathon and Its Impact on Western Civilization by Jim Lacey. Copyright 2011 by Jim Lacey. Used with permission of Bantam, a division of Random House Inc. 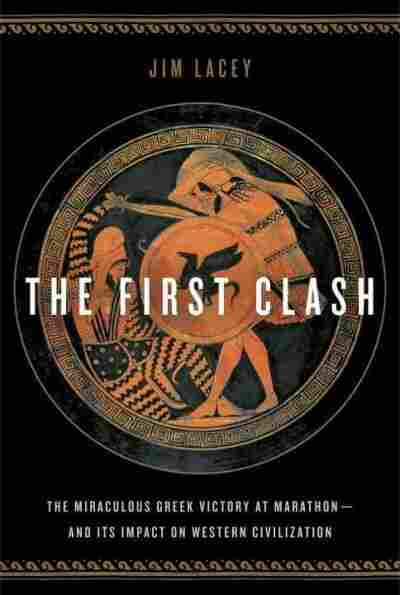