Accessibility links
U.S. Tribe Cites Tsunami, 'Twilight' In Bid To Expand Fearing a tsunami, an Indian tribe in Washington state wants to move its village to higher ground. To do that, the Quileute tribe is enlisting the help of the pro-werewolf lobby. In the world of the Twilight series, the Quileute lands are teeming with Jacob's fellow werewolves. 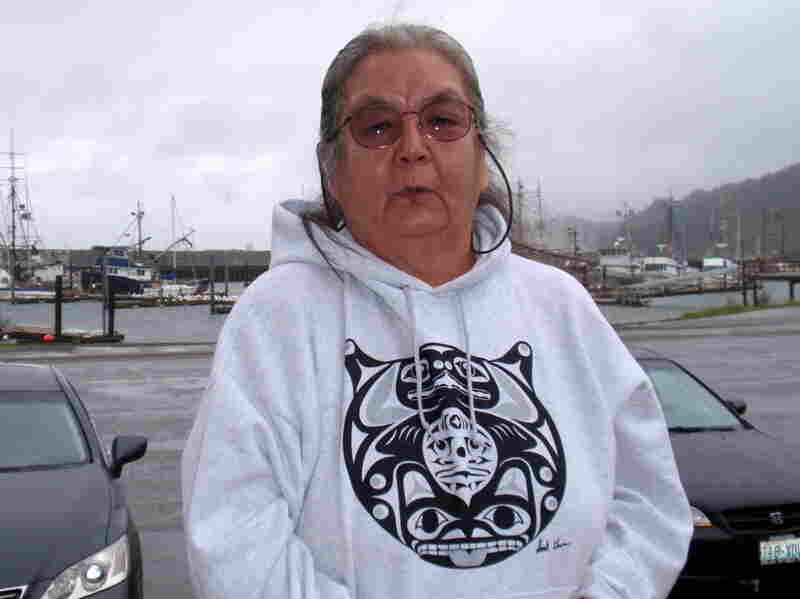 DeAnna Hobson, a Quileute elder, says that she has been warned about a possible tsunami disaster in her dreams. Tom Banse/Northwest News Network hide caption 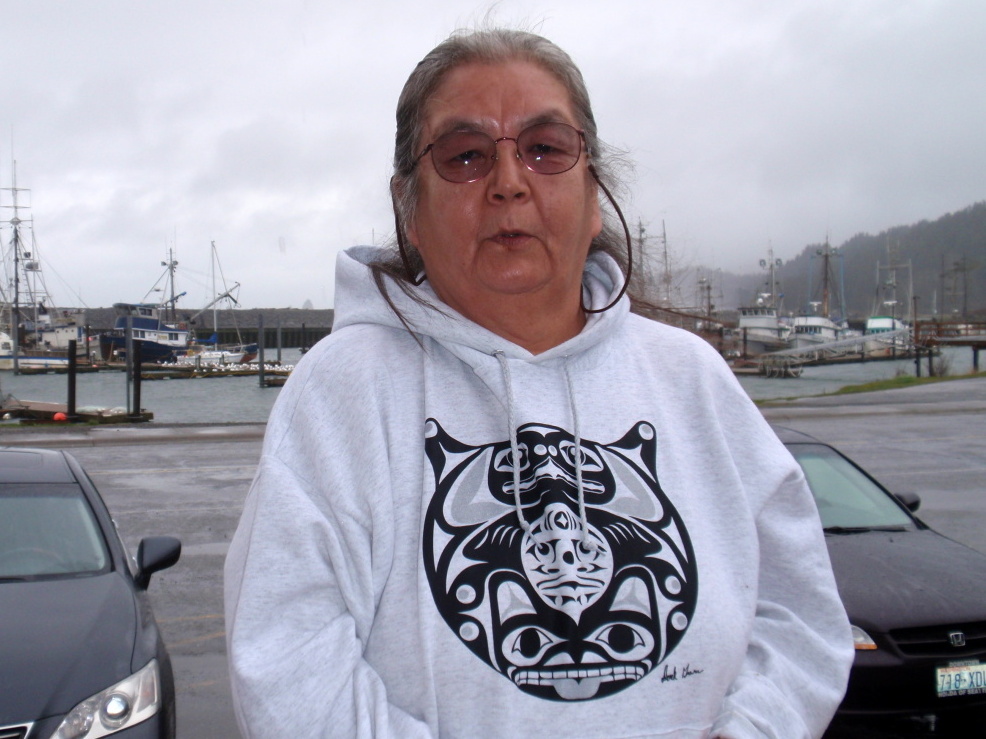 DeAnna Hobson, a Quileute elder, says that she has been warned about a possible tsunami disaster in her dreams.

An Indian tribe in Washington state wants to move its village to higher ground, citing concerns over a possible tsunami from earthquakes around the Pacific Ocean.

But it takes an act of Congress to expand a reservation. So the Quileute tribe is hoping to get the word out — in part by relying on its newfound popularity as a tourist site for fans of the Twilight series of books and movies. In those stories, the Quileute lands are teeming with werewolves.

The Quileute Indian Reservation is all of one square mile. On three sides, it's surrounded by the lush rainforest of Olympic National Park; on the fourth side, it's bounded by the Pacific Ocean.

"The atmosphere I enjoy living by the ocean is sleeping with my window open to hear the sounds of the ocean," she says.

But the roar of the surf has more ominous dimensions now. Like everyone else, Hobson watched the unforgettable images of destruction from the Japanese tsunami last month.

Since then, Hobson says, she's had a recurring dream: "We're up at the cemetery road, and I look down and I see all this water going by. We're trying to retrieve, or throw a rope out into the water.

"I take my dreams seriously," Hobson says. "Dreaming something like that, to me, it is giving me a signal that something drastic is going to happen." 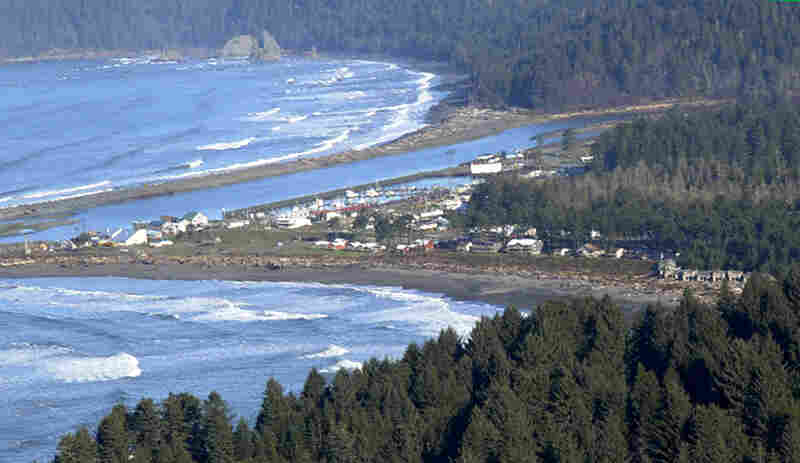 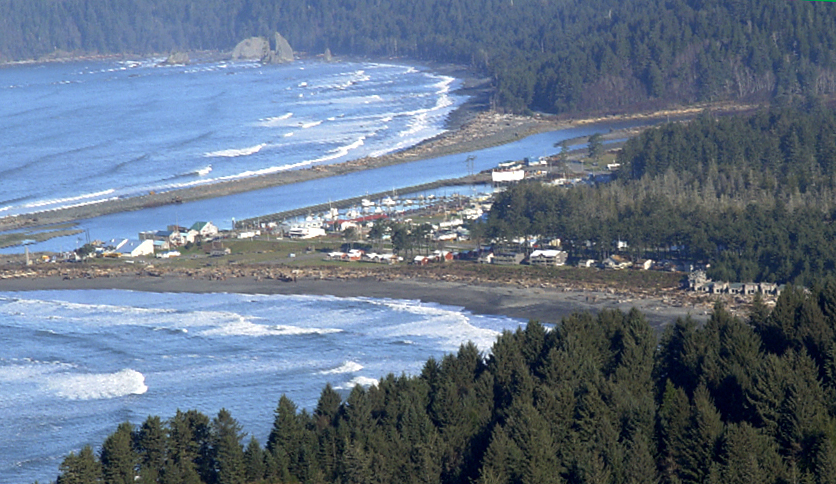 La Push, Wash., is home to the Quileute Tribe, on the Pacific coast.

The dream is not far off from what geologists say could happen on this part of the coast. With that in mind, Quileute leaders want to give the roughly 300 people in the lower village the option to move uphill.

"The number one priority is moving our children — the schoolchildren — up to higher ground," says tribal chairwoman Bonita Cleveland. "Our school is right on the ocean."

Also near the water — and thus, potentially at risk — is the tribal senior center, several churches and the tribal headquarters.

But there's a big problem with moving them. As Cleveland points out, the tribal village is already built right up to the edge of the tiny reservation. On the other side of the line is majestic Olympic National Park.

"Back in the day, our ancestors moved along this land freely," Cleveland says. "They moved up and down this coast. Today, we can't do that."

Only Congress can adjust the boundaries of a national park. And it's done that before — in December, lawmakers gave the nearby Hoh Indian Tribe a sliver of Olympic park land. That tribe is now planning its move out of the tsunami zone. 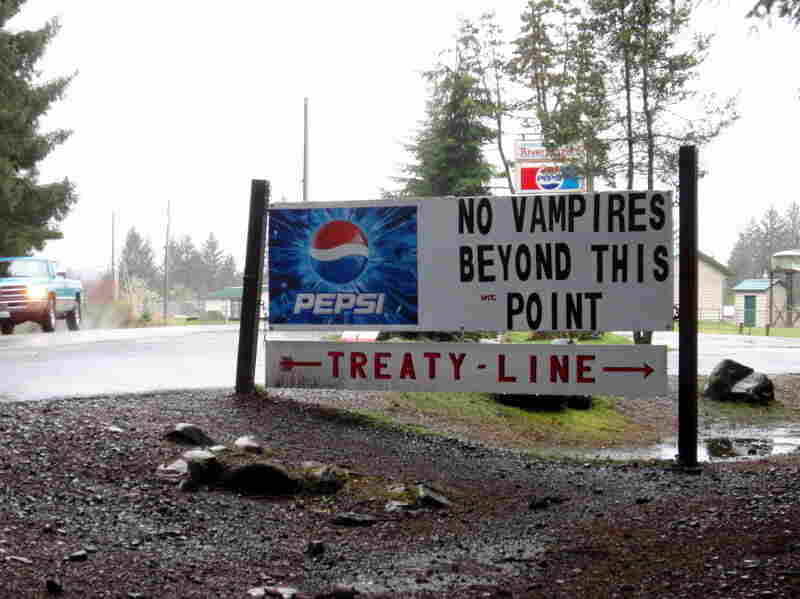 Local businesses on the Olympic Peninsula embrace the notoriety that the Twilight series of books and movies has brought to the region. Tom Banse/Northwest News Network hide caption 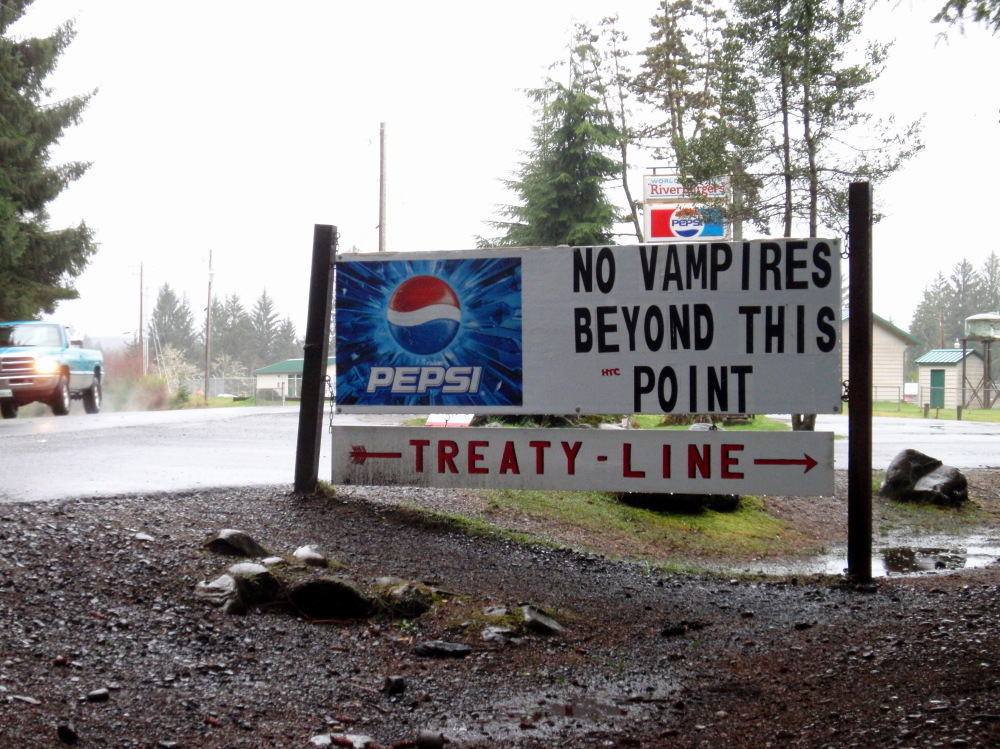 Local businesses on the Olympic Peninsula embrace the notoriety that the Twilight series of books and movies has brought to the region.

But the Quileutes are asking for much more land: about 785 acres of the national park, some of it designated wilderness. And to help its cause, the tribe is seeking to enlist an unusual ally: the huge fan base of the Twilight vampire saga.

In the story, the Quileute reservation is supposedly home to fleet-footed werewolves. A Twitter feed and YouTube channel managed by the tribe tries to tell the real story.

As the narrator of one of the tribe's videos says, "The Quileute have been thrust in the international spotlight. But the reality of the Quileute people is far different from what is portrayed in the Twilight books and movies."

This part of the Washington coast is a popular destination for Twilight tourists — a phenomenon that came up at a U.S. Senate hearing called to review the proposed land transfer.

"Helping the Quileute Tribe move their facilities 800 feet up and out of the tsunami zone is the primary purpose of this legislation," she said. "However, it will ensure visitors access to Second Beach, Rialto Beach, and preserve thousands of acres of Olympic National Park as wilderness."

There's no organized opposition to the move, so the tribe's main challenge now is to keep the attention of the busy Congress long enough to get its bill passed. Then the next hurdle will be to find the money to relocate to higher ground on the Olympic Peninsula.