Accessibility links
Can Wasps Squash The Stink Bug Plague? Home is where the heart is. It's probably also where a ton of brown marmorated stink bugs are right now, crawling out from behind photos, covering your windows and dropping into your hair. Help may be on the way, in the form of a parasitic Asian wasp. 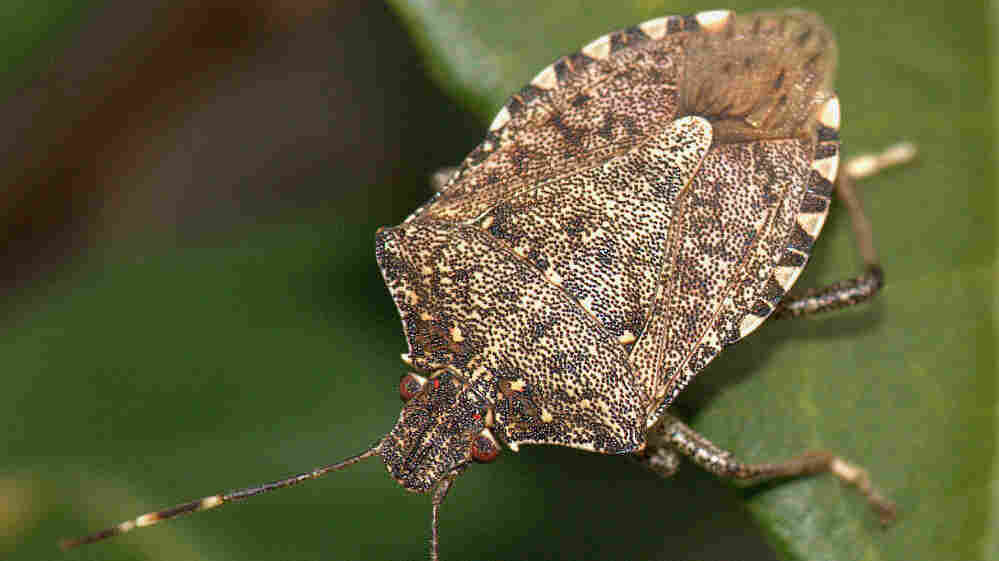 The brown marmorated stink bug has inundated the mid-Atlantic, taking its toll on crops across the region. Researchers are investigating whether a type of parasitic wasp can bring down stink bug numbers. Jeff Wildonger/USDA Beneficial Insect Research Lab hide caption

Home is where the heart is. It's also probably where a lot of stink bugs are right now, crawling out from cracks and crevices. They were introduced into Allentown, Pa., from Asia in the 1990s and have been spreading ever since, reaching seemingly plaguelike proportions in the mid-Atlantic states. But an experiment is under way to reintroduce the stink bug to its mortal enemy: a parasitic Asian wasp.

The shield-shaped brown marmorated stink bugs descended on the mid-Atlantic region with the fury of a plague last year. If you try to crush them or vacuum them up, they release a smell like cilantro and burning rubber.

But for Bob Black, who runs Catoctin Mountain Orchard in Thurmont, Md., they're more than just a nuisance. It's about money.

"This thing is going to put a big chapter in my book of life. I mean, I've never had anything affect me like this," he says.

Just like many other farmers across the region, Black saw a lot of his crops decimated by marmorated stink bugs. They take their long needle-like mouthpiece and stick it into the flesh of fruits and vegetables, leaving them bruised and disfigured. 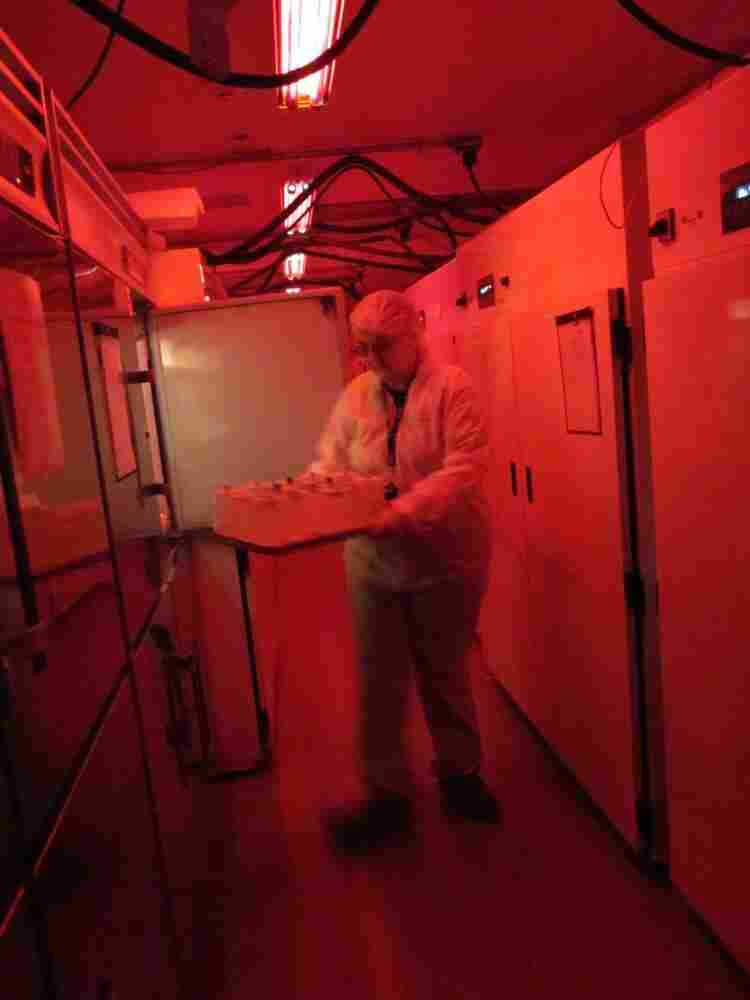 Kathy Tatman removes jars from an insect growth chamber at a quarantine lab at the U.S. Department of Agriculture's Beneficial Insects Introduction Research Unit. Most insects can't see red, so the red lights essentially keep the insects in the dark, making them less likely to fly around and escape. Sabri Ben-Achour/WAMU hide caption 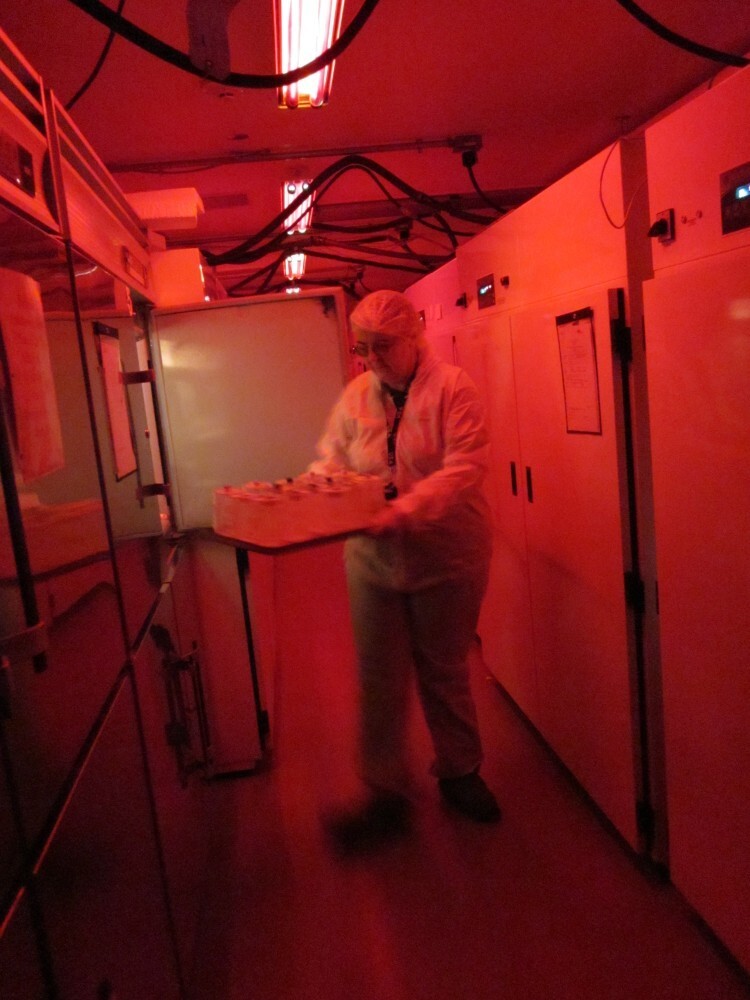 Kathy Tatman removes jars from an insect growth chamber at a quarantine lab at the U.S. Department of Agriculture's Beneficial Insects Introduction Research Unit. Most insects can't see red, so the red lights essentially keep the insects in the dark, making them less likely to fly around and escape.

And as Black discovered, his usual pesticides didn't really do much.

"This one can actually play in it and eat it, and it won't even kill it — that's how tough this insect is," he says.

And this year, the stink bug invasion will probably be worse.

"We're going to hear a collective wail up and down the East Coast as hordes of these things come out of people's attics and find their way outdoors," says Mike Raup, an entomologist at the University of Maryland.

"They're now found in more than 30 states, as far west as Washington and California; as far south as Florida they've been detected," he says. "But right here in the mid-Atlantic region — this is ground zero for the brown marmorated stink bug."

He says at the core, the problem is pretty basic: When they escaped Asia, they simply arrived here without their natural enemies.

A hundred miles away in Newark, Del., that is exactly what scientists are studying at a U.S. Department of Agriculture insect lab. Outside a red door marked "Quarantine," entomologists Kim Hoelmer and Kathy Tatman are suiting up.

Behind the door are a myriad of insects being evaluated to see if they can fight invasive foreign pests that have gone wild in North America. The corridors of the complex are bathed in dark red light, which minimizes insect flight movement.

"Because most insects can't see red, this looks like a dark room to them," Hoelmer says.

Everything is designed to prevent escape, including the building's air and water systems.

Tatman pulls out tray after tray of little vials and petri dishes from modules whose temperature, light and humidity are precisely controlled. It's an insect growth chamber. Inside the vials, rafts of tiny, pearly green orbs sit on leaves. They're stink bug eggs.

"This is a typical example of a fresh brown marmorated stink bug egg mass — 25 to 30 eggs," Hoelmer says. "We're exposing them to female Trissolcus wasps."

The tiny black dots are zipping around in the jars. Just 2 millimeters long, the parasitoid Trissolcus wasps, from China, Japan and Korea, don't look like much more than gnats. They don't bite or sting, and they feed on nectar, but in Asia, they are the natural nemesis of the brown marmorated stink bug.

"These small wasps will deposit their eggs inside the stink bug eggs. Then the parasite egg hatches, and the immature feeds on the inside of the stink bug egg," Hoelmer says. In a few weeks, out pops a new wasp, and no stink bug. Hoelmer says these wasps are extremely specialized.

"If they can't find stink bugs or stink bug eggs to lay their own eggs in, they'll die. They can't survive on anything else," Hoelmer says.

Weeding The Bad From The Good

There are almost 300 types of stink bugs in the United States, and a lot of them are helpful because they eat other pests. So Hoelmer needs to know if these wasps would ever go after other stink bugs, including stink bugs that are closely related to the brown marmorated stink bugs. That's what he's testing in the vials in his lab. 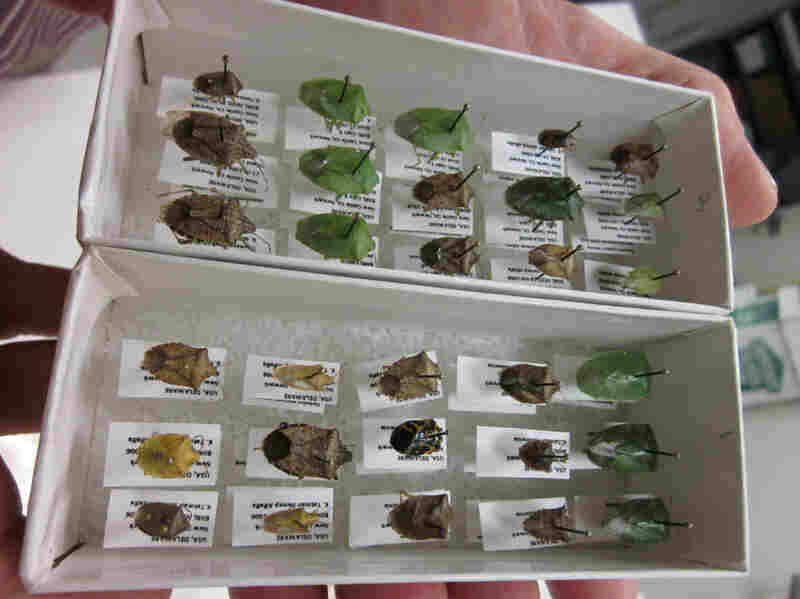 There are about 300 types of stink bugs in the U.S., and some of them are very helpful as predators of agricultural pests. Sabri Ben-Achour/WAMU hide caption 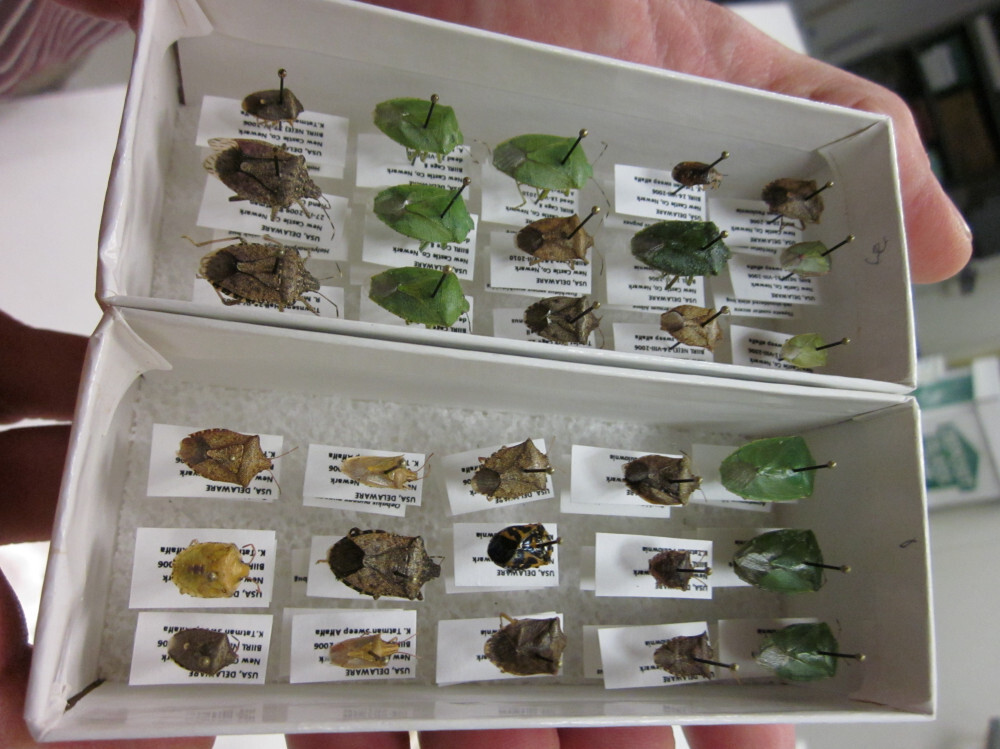 There are about 300 types of stink bugs in the U.S., and some of them are very helpful as predators of agricultural pests.

"If they don't attack any of the close relatives, they won't be as likely to attack more distant ones," he says.

It will take three years before he's satisfied that the wasps don't pose a risk. Hoelmer points to examples where this has worked before — gypsy moths were controlled by an introduced fungus, and white flies in California were cut down by other parasitic wasps.

"Using the wasp will hopefully be our answer. I mean, we've had other things — drought, other issues — but this insect is one of the toughest things that we're going to have to work on," he says.

Until then, seven states are asking the Environmental Protection Agency to relax pesticide regulations. And researchers are looking at pheromones, traps and naturally repellent landscape plants — none of which are considered fully effective.

Smelly Invaders Want To Crawl Into Your Home Oct. 1, 2010