Accessibility links
The Nation: GOP Is Holding Our Economy Hostage With the Treasury Department predicting that the nation will hit its debt ceiling in mid-May, Congress is taking up the issue. But George Zornick of The Nation says that Republicans are using the deadline to push forward an agenda that drastically cuts spending.

The Nation: GOP Is Holding Our Economy Hostage

The Nation: GOP Is Holding Our Economy Hostage 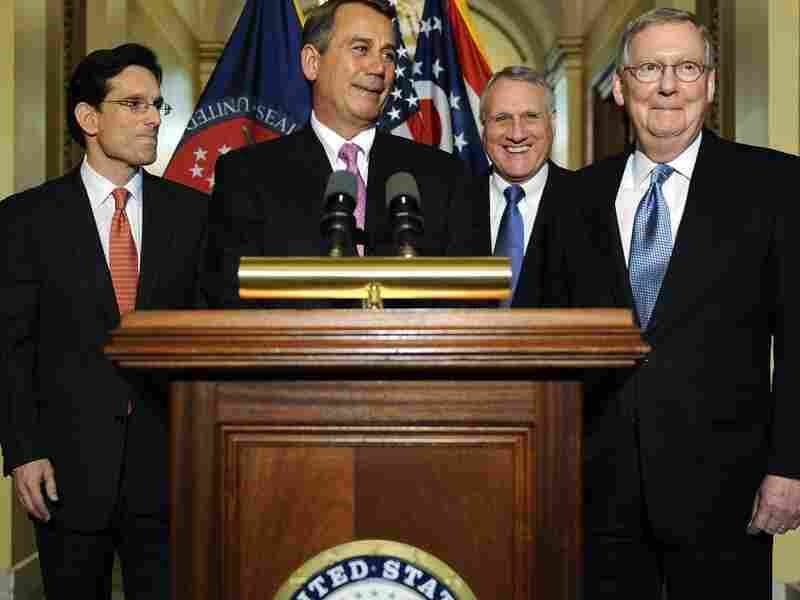 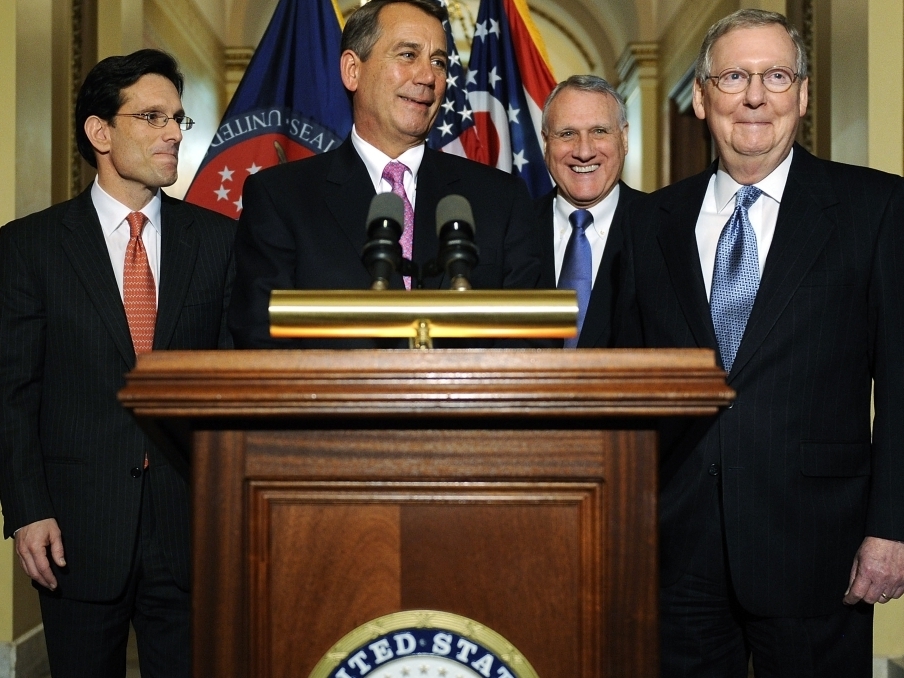 George Zornick was Senior Reporter/Blogger for ThinkProgress.org, and writes for The Nation.

The standoff du jour in Washington is about a vote to raise the federal debt ceiling. Democrats and the White House insist it must be done — as does Wall Street — while fiscal conservatives and Tea Party activists are demanding serious concessions, and in some cases, an unconditional "no" vote. As the conversation reaches a crescendo, it's useful to take a quick look at what the debt ceiling actually is, and what forces are at play in the debate.

When the United States needs to borrow money, the Treasury Department issues bonds in order to pay for the deficit spending. Before 1917, Congress had to approve this borrowing every time it happened, but World War I created a need for more flexibility and lawmakers gave the federal government unchecked borrowing powers, provided the total amount was less than a certain limit.

Congress now needs to approve any borrowing past the $14.3 trillion debt ceiling, which the United States will reach "no later" than May 16, according to Treasury Secretary Timothy Geithner. If Congress doesn't raise the debt ceiling, the government would have to stop spending — including stopping interest payments on those Treasury bonds, meaning that the United States would effectively default on its debt.

Opportunistic Republicans have correctly understood this vote as a chance to force Democrats into approving several goals held by fiscal conservatives and the Tea Party. Though the debt ceiling will be reached because of past spending — including many Republican initiatives like the Medicare drug benefit and the costly invasion of Iraq — Republicans insist that concessions on future spending are needed before they will agree to raise the limit.

Senate Minority Leader Mitch McConnell (R-KY) said last month that all 47 Republican Senators were unified in their opposition to raising the debt ceiling unless "credible" efforts were made to cut federal spending. Speaker of the House John Boehner (R-OH) has also said his caucus would not vote to raise the debt ceiling unless "it is accompanied by meaningful action by the President and Congress to cut...the job-killing spending binge in Washington."

Tea Party activists, meanwhile, are working furiously to ensure Republicans in Congress stand firm. The Tea Party Patriots, the largest organized Tea Party group in the country, warned that "Republican credibility as fiscally responsible managers of public resources is on the line" with the debt ceiling vote.

The group is holding a televised town hall this week on the issue, and urging activists to crash Congressional offices on Thursday to demand their representatives hold the line. The far-right website World Net Daily is has already sent 250,000 letters to 242 House Republicans, urging them to vote against a debt limit increase.

The conservative position makes sense on both messaging and strategic levels. It's simple to push the idea that the United States has somehow reached the limit of what it can spend — though of course this "limit" is arbitrary, and has been raised 10 times just since 2001, again often by Republicans who needed to finance expensive tax cuts or wars.

From a strategic perspective, the threat of default is a gun to the head of Democrats who would otherwise be unwilling to even negotiate on many of the demands currently being made by Republicans. As Representative Michael Burgess (R-TX) told World Net Daily, "I must be convinced we have wrung every nickel of spending out of this.... This is the one tool available to us, and unilateral disarmament leads to financial Armageddon."

However, Republicans — to their detriment — haven't really made it clear what they want in return for approving a debt ceiling increase, beyond the aforementioned "credible cuts." When they have, these demands are often wildly unrealistic.

Republican leaders in Congress are proposing "a wide range of major structural reforms" to the budget process, including statutory spending caps, a constitutional amendment mandating balanced federal budgets and a two-thirds threshold for approving tax increases or debt limit increases in the future.

The balanced budget proposal is simple posturing, since it would require 67 Congressional votes along with the approval of 38 state legislatures. It would also impose almost impossibly stringent requirements on a government that often needs to deficit spend, especially in times of multiple wars and economic distress.

The two-thirds approval requirement on new taxes, meanwhile, would essentially spell the end of tax increases in America. California has such an amendment on the books, and the impossibility of getting legislative approval of new taxes left the state with "no choice but to cut its budget to ribbons during the economic downturn," as the Wonk Room's Pat Garofalo noted. It's easy to imagine conservatives might actually enjoy this outcome, but not easy to imagine that the current Congress would impose such a strict measure.

Tea Partyers in the House and presidential candidates eager to ride the activist wave building around the debt limit vote are issuing even more preposterous demands. Former senator and current presidential hopeful Rick Santorum said yesterday he would "absolutely" let the United States default on its debt unless healthcare reform was entirely defunded first. Fellow White House hopeful Newt Gingrich doesn't want the debt ceiling to be raised unless Congress immediately enacts the Ryan plan to block-grant Medicaid spending. Freshman Tea Party Representative Allen West (R-FL) says he would like to cut corporate tax rates in half before approving a debt ceiling increase.

Representative Michelle Bachmann (R-MN) — a professional one-upper of Tea Party rage — has given up issuing any demands at all, and is advocating a straight "no" vote. In her view, the United States wouldn't have to default on its debt — it would make the Treasury bond payments with money that would otherwise have been used to send out those pesky Social Security checks, or whatever other spending that would no longer be "prioritized," in her words.

So much like the recent budget showdown, the Republican base is animated and the demands of the party's elected leaders are increasingly extreme and do not really coalesce around a specific list of reasonable proposals. The White House has been asking for a simple, "clean" reauthorization of the debt limit with no string attached, though it recently opened the door to adding "deficit-reduction elements."

An additional factor working against Republicans is that the threat of default may be so dangerous that Americans realize the party is playing with gasoline next to a flammable economic recovery. If the debt limit is not raised, Treasury bonds would suddenly become a shaky investment and, as Annie Lowery outlines in Slate, financial markets could start dumping bonds en masse, possibly even before an actual default occurs. They might never be viewed as a safe investment again, meaning also that the U.S. dollar would lose its position as the default currency. Mark Zandi, chief economist at Moody's Analytics, told Ezra Klein that "the system will collapse into turmoil."

Other analyses say the end-game might not be that bad, and that the Treasury Department could take several to avoid default and calm investors. Perhaps that's true, but nobody involved really wants to find out. Boehner was told in no uncertain terms by Wall Street that debt ceiling politics risk "catastrophic outcomes."

Republican leaders are caught in a place they'd probably rather not be — between diametrically opposite demands of Wall Street and the Tea Party. Leadership will ultimately cut a deal to get loose from this situation, and safe money is on Tea Partiers being disappointed--the Constitution won't be rewritten to include balanced budgets. The only real question now is what the consolation prize will be.