Accessibility links
Mozambique Coal Mine Brings Jobs, Concerns In order to keep up with its growing demand for raw materials, Brazil has set up a coal mine in Mozambique. And while the mine is providing jobs to locals and coal to global economies, it also required that 5,000 people relocate. 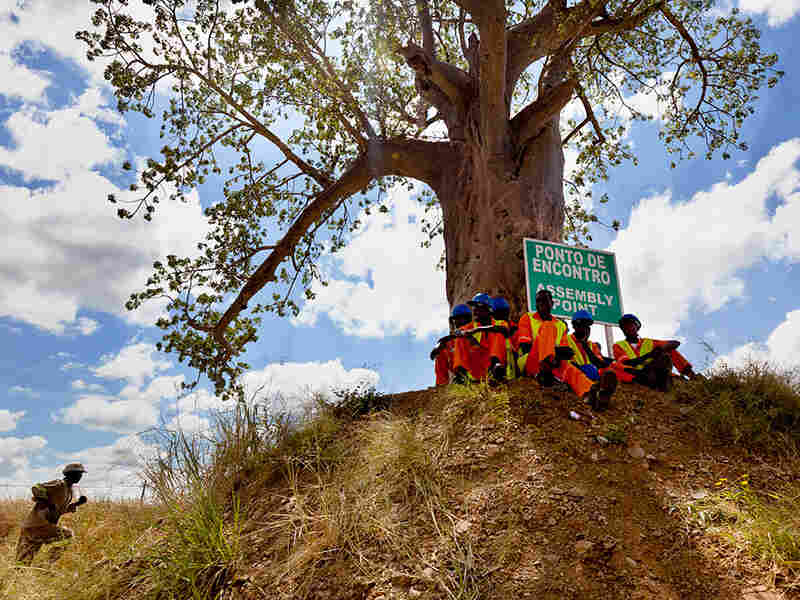 Workers take a break at a coal mine operated by the Brazilian mining company, Vale, outside the city of Tete, Mozambique. Vlad Sokhin/for NPR hide caption

As developing countries grow, their need for raw materials grows, too.

This is the case for Brazil, a country that has much in common with the nation of Mozambique: Both have a mix of African and Portuguese influences; both are rich in natural resources; and both fought long and hard to throw off European colonialism.

Today, however, a Brazilian coal mine in Mozambique has some wondering what the energy demands of growing economies like Brazil really mean for African countries like Mozambique.

This coal mine in northwestern Mozambique is owned by the Brazilian company Vale — it's a gaping, dark gray pit in the middle of a green, windswept savannah. Still under construction, it currently employees about 7,500 people.

Jose Manuel Guilengue, 23, a machine operator, says that he and a friend traveled 1,000 miles from the capital to get there, where they were both hired. That was a year ago. He now makes around $400 a month — which is more than four times the average salary in Mozambique.

According to the general manager overseeing construction, Osvaldo Adachi, this mine will produce about 11 million tons of coal each year, for at least three decades.

"It's one of the biggest coal basins in the world," he says. "The target of this market is Brazil, China, Japan, Europe and India."

Vale told us we had to leave, but I didn't want to. That was our land! Like it here? No, I don't. Here there's no where to grow food. And sure, there's water and energy, but you have to pay for it. But back on our land, we had a river for water, and we didn't have to pay for.

He says the mine won't just provide coal to economies with global clout — it will also help Mozambique by providing jobs.

The government is in favor of the project. They say it will mean tax revenue and jobs for people in the remote, sparsely developed Tete province — jobs that are hard to come by all over Mozambique, where unemployment is near 20 percent.

But some, like environmentalist Anabela Lemos, see only problems with the mine.

"I think coal mining, it's well known, the impact of coal mining, which is why some countries don't want any more coal mining," she says. "Plus to generate energy, it's more pollution. We don't call that development."

Mozambique currently relies on foreign aid for much of its budget and struggles to maintain food and gas subsidies. After a spike in prices last year, food riots killed over a dozen people. Yet while mining companies like Vale do provide some jobs, they pay as little as 3 percent in taxes to the Mozambican state.

"This is a new colonial era. This time it's not government; it's corporations," Lemos says.

According to Lemos, the clearest sign of a so-called new colonial era is the effect of coal mining on locals. To make way for the mine, Vale moved about 5,000 people off their land into what they call "settlements."

"I think everything is new to them, but according to our social department, the people are very happy because they have all the infrastructure," Adachi says.

Situation In The Settlements

One particular settlement is on the outskirts of the city of Moatize. It has rows of neat stucco and metal houses painted cheerful colors like yellow and green that sit amid a stretch of hot scrub. 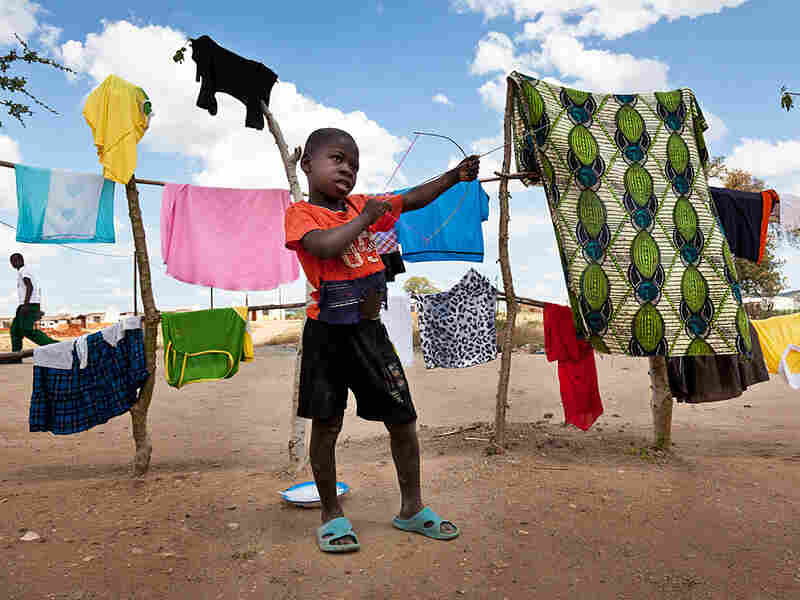 A young child plays at the 25 de Setembro settlement; the Vale company has relocated more than 5,000 people, who lived on the land Vale is now developing for coal mining. Vlad Sokhin /for NPR hide caption

It looks more comfortable than the rough thatch, wood and mud-brick buildings in most communities. But even with the houses and the new infrastructure many people who live here — like Doratea Mateus, who is cleaning fish heads for soup — say they just wanted to stay on their land.

"Vale told us we had to leave, but I didn't want to," Mateus says. "That was our land! Like it here? No, I don't. Here there's nowhere to grow food. And sure, there's water and energy, but you have to pay for it. But back on our land, we had a river for water, and we didn't have to pay for it."

Mateus rinses the fish under a spigot in the yard. Mateus' uncle, Satar Pensar, is struggling to pay for water and to feed this family of eight — something he never imagined when he had a big plot of land and ample, free water. But he says he doesn't see an alternative.

"Where am I going to complain?" Pensar says. "I don't have anywhere I can go make a complaint. If I go up there and say something, they're going to tell me, 'No — go back and stay where you are.' "

Annie Murphy reported this story during a fellowship with the International Reporting Project.