Accessibility links
Far-Right Parties Gain Ground In Europe France, Finland and numerous other European countries have felt a pull to the right in recent months. This could make it harder for the European Union to address economic challenges or engage in military missions abroad. 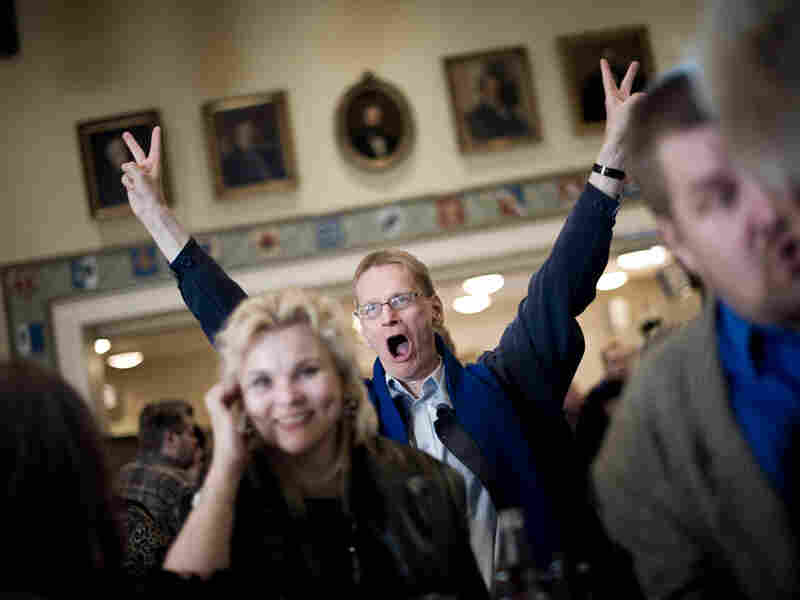 A supporter of Finland's nationalist party, True Finns, celebrates at the election headquarters after the parliamentary elections in Helsinki on April 17. True Finns blew away even the most optimistic predictions to suddenly become a major political force. Jonathan Nackstrand/AFP/Getty Images hide caption

Italy has taken in more than 20,000 refugees this year fleeing political upheaval in Tunisia and other North African countries.

France, though, has refused to accept even a trainload holding visas from Italy. One big reason for the French resistance is the political challenge French President Nicolas Sarkozy faces from the right. Recent polling shows Sarkozy trailing Marine Le Pen, the leader of France's anti-immigrant National Front Party, ahead of next year's election.

Mainstream politicians all across Europe are feeling pressure from the right.

In Finland, the nationalist True Finns won 39 seats in Parliament earlier this month. The True Finns were rewarded with the chairmanship of the Foreign Affairs Committee Tuesday and will be looking to make more gains as negotiations over the shape of the incoming coalition government continue this week.

The rise of far-right parties — not just in France and Finland but in numerous other countries across Europe — has the potential to call into question not only immigration politics but the prospects for continuing bailouts of economically struggling European Union member states.

As parties promoting nationalism gain strength, Europe will struggle to speak with one voice — in terms of projecting military and diplomatic power abroad, as well as setting economic policy, says Charles Kupchan, who served as a White House adviser on European affairs under President Bill Clinton.

"I would suppose for Europe, this is its most significant political crisis since the project [of unification] began in the 1950s," says Kupchan, now a senior fellow at the Council on Foreign Relations.

In some ways, the rise of these right-wing parties is both a cause and a symptom of the trouble that Europe finds itself in. For the first time in my career, it's conceivable to me that the European Union could start unraveling. I wouldn't bet on it, but the stakes right now are so high that it's conceivable that the EU has hit its high-water mark and will go no further, or go into reverse.

Charles Kupchan, senior fellow at the Council on Foreign Relations

Europe has long been home to populist, anti-establishment parties. But today's far-right leaders bear little stylistic resemblance to the neo-Nazis who emerged roughly 20 years ago, at the end of the Cold War.

Le Pen and Timo Soini, the leader of the True Finns, are both smooth and charismatic figures. And where Le Pen's father, Jean-Marie, as leader of the National Front a decade ago, dismissed the Nazi gas chambers as a "detail" of history, Marine Le Pen has called the Holocaust the worst episode of the 20th century.

The fact that they can express extreme views with "a veneer of acceptability" actually makes today's far-right leaders more dangerous than yesterday's skinheads, says Simon Tilford, chief economist for the Centre for European Reform, a London-based think tank that favors European integration.

Today, there's a greater sense of unease about Europe's place in a globalized economy, Tilford says. To the extent that far-right parties that can speak to that unease in ways that come off as reasonable, they can not only capitalize on it politically, but potentially force other politicians to adopt similar language or sentiments.

"The far-right movements that we're seeing — not all of them, but a few of them — pose a greater challenge than those we saw in the 1980s and 1990s," Tilford says. "They're expressing extreme positions but in a far more polished way, and there's a danger of such views becoming more socially acceptable."

Sarkozy, British Prime Minister David Cameron and German Chancellor Angela Merkel have each expressed concern in recent months about problems associated with Muslim immigrants and the "failures" of assimilation and multiculturalism. 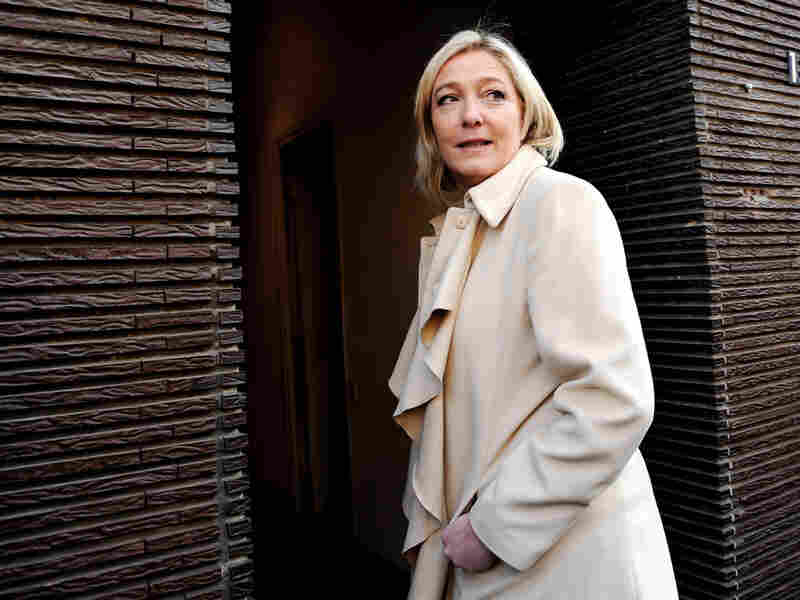 Head of the French Front National Party Marine Le Pen arrives at her party's office after casting a ballot in Henin-Beaumont, France, on March 27, during the second round of the local elections. Philippe Huguen/AFP/Getty Images hide caption

On his first day on the job last month, Hans-Peter Friedrich, Germany's new interior minister, said, "To say that Islam belongs in Germany is not a fact supported by history."

The new Hungarian Constitution, signed into law on Monday, overtly refers to Hungary as a Christian nation.

Aside from a change in tone politically, economists worry that nativist sentiments promoted by far-right parties will undermine European nations' prospects for pulling each other out from fiscal crises.

Bailout packages have already been extended to Greece, Ireland and Portugal.

"This was a referendum on EU policy," Soini, the True Finns leader, said following his party's electoral gains. "We will keep our money and our right to make our own decisions."

The bailouts have left everyone unhappy, says Kurt Volker, a former U.S. ambassador to NATO.

The problems Europe faces financially have opened up a lot of political room for anti-incumbent parties — not all of them on the right. Volker predicts that France's next election will be won by socialists, "unless they really screw it up."

But the ultraconservative parties are gaining popularity explicitly on a platform of opposition both to immigration and the European Union's economic policies.

And their ability to win power — or sway those who hold it — matters a lot. EU policies are set by consensus, meaning that a single country can torpedo any future bailout deal.

Already, Continental fiscal policies are too cautious in the eyes of many economists because domestic politics interfere with more rigorous measures that might be required.

"In some ways, the rise of these right-wing parties is both a cause and a symptom of the trouble that Europe finds itself in," says Kupchan, the CFR senior fellow. "For the first time in my career, it's conceivable to me that the European Union could start unraveling. I wouldn't bet on it, but the stakes right now are so high that it's conceivable that the EU has hit its high-water mark and will go no further, or go into reverse."