Accessibility links
John Paul's Rise Toward Sainthood: Going Too Fast? John Paul II will be beatified in Rome on Sunday, bringing him one step away from sainthood. But some Catholics question whether the late pope is being elevated a bit too fast. They say special care is needed — especially because he presided during the clerical sex abuse scandal. 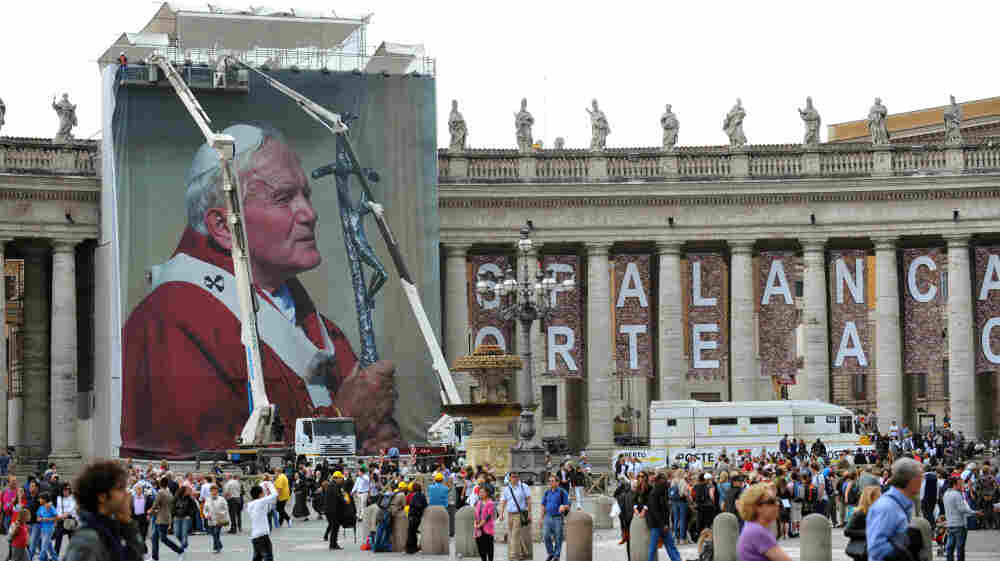 Workers set up a giant photo of the late Pope John Paul II at St. Peter's Square on April 27 at the Vatican. John Paul II will be honored May 1 at a beatification ceremony. Andreas Solaro/AFP/Getty Images hide caption 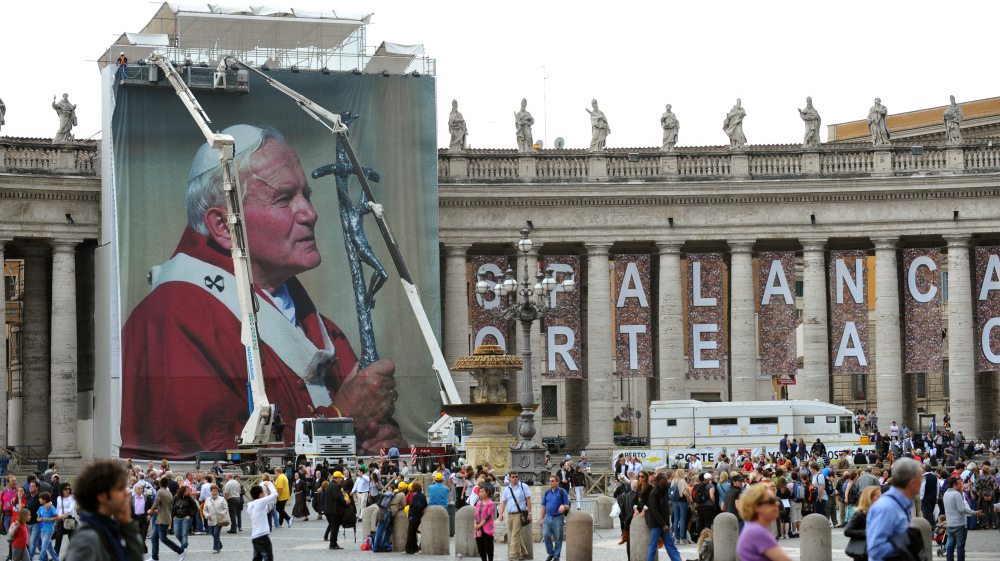 Workers set up a giant photo of the late Pope John Paul II at St. Peter's Square on April 27 at the Vatican. John Paul II will be honored May 1 at a beatification ceremony.

The chants began even before Pope John Paul II had been put to his final rest, as his coffin was carried through St. Peter's Square: "Santo subito! Santo subito!"

A month later, Pope Benedict XVI — his successor and close friend — launched the process that would do just that. On Sunday, John Paul II will be beatified in Rome, bringing him one step away from sainthood. 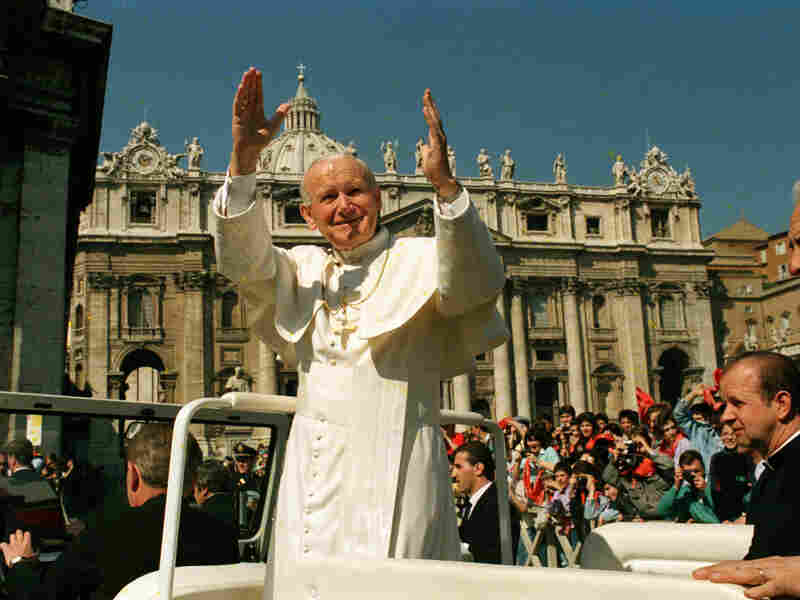 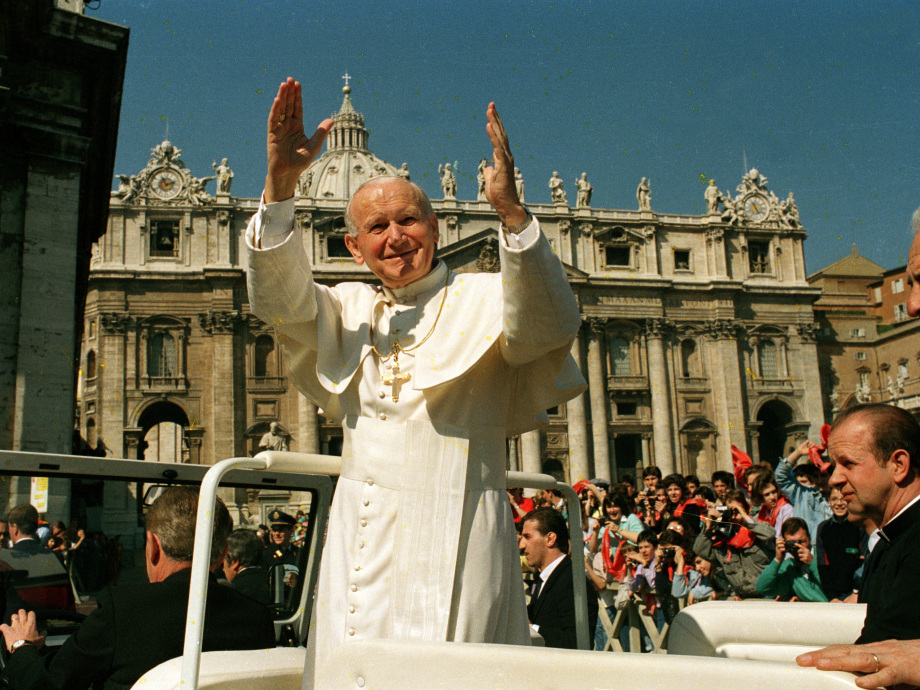 "I was not surprised at all" that John Paul's beatification is being fast-tracked, says Archbishop Timothy Dolan of New York. Dolan, who observed John Paul up close when he lived in Rome for seven years, says this is not a difficult call.

Some Catholics are questioning whether the late pontiff is being elevated a little too fast, but Dolan says John Paul's character and achievements are indisputable. The Polish pope is credited with helping bring down communism. He repaired relations with the Jews. He forgave the assailant who nearly killed him. And he wooed a young generation back to the faith.

"We have a whole wave of priests in the Catholic Church who call themselves 'John Paul II priests,' " Novak says. "There are also a wave of people who became Catholics because of John Paul II. His effect on minds and hearts was just unparalleled — maybe in all human history."

Novak's sentiment was echoed by some of the faithful dashing into noon Mass at St. Matthew's Cathedral in Washington, D.C.

A look at the steps the Catholic Church follows to recognize someone as a saint:

Stage 1: Investigation
Usually, five years must pass after a person's death before he or she can be considered for sainthood. However, the pope can waive this requirement, as Pope Benedict XVI did in the case of the late John Paul II, who died in 2005. To begin the process, a bishop opens a "cause" and, if there's no objection from the Holy See, assembles a tribunal to examine the potential saint's life. The investigation looks for evidence that the person exercised "heroic virtue."

Once the local investigation is done, it is passed on to Rome, where additional inquiries are made. If church officials there sign off, the cause is presented to the pope, who can then declare the person "venerable." Pope Benedict did this for John Paul II in December 2009.

Stage 2: Beatification
The next step to sainthood is to have a miracle attributed to the person's intercession with God after death. Often, these are medical miracles. The miracle attributed to John Paul is the cure of a French nun who had Parkinson's disease, the same disease the former pope had. Once a miracle is confirmed by the church, the current pope can declare the person "blessed." (If a person is judged to have died a martyr, no miracle is required for beatification.)

Stage 3: Canonization
For the pope to declare the "blessed" a saint, another miracle must be confirmed. (NPR's Barbara Bradley Hagerty recently examined how the church investigates miracles.) The entire process can take decades to complete.

During John Paul II's own time as pope, he made the entire process easier and declared 482 saints — more than all the popes in the previous 500 years. Under Benedict, the process has become more rigorous.

"He was like the Reagan or the Obama of popes," said 21-year-old Joseph Leveratto. "He was appealing. You felt like he was a warm, caring, loving holy father."

Julia Sendor, a 24-year-old Polish-American, said her family is throwing a party on Sunday to celebrate the beatification.

"It's a sign that even today, in our modern world, you can have people who can make a change through their faith," she said. "So we're really excited."

But some were less enthusiastic.

"His record was far from unblemished, and there are certainly many bad things that happened in the church while he was pope," said Nicholas Porritt. "So I'm not sure this rush to beatify him is necessarily in the best interest of the church."

"I think that the process exists for a reason," said Carmen Iezzi, "and should be followed no matter who it is or how famous or popular they are."

Under normal circumstances, the Vatican waits five years before it even starts the process of making someone a saint. But in John Paul's case, Pope Benedict waived the waiting period. That has Catholics across the spectrum concerned.

"One of the reasons you want to go slowly is you don't want to have a horrifying 'oops' moment," he says. "Because saints cannot be unsainted. I don't think anytime in history has one been de-canonized."

Popes require special care, says the Rev. Joseph Fessio, the founder of Ignatius Press. It's one thing to fast-track Mother Teresa, who founded a ministry for the sick. But Fessio says the Vatican should take more time with the head of the church.

"As a pope, he's a historic figure," Fessio says. "And usually historic figures don't take their place in history until after some history has gone by and they can be assessed from a longer distance."

GALLERY: Will They Become Saints? It'll Take A Miracle

The same rigor should apply to miracles, says Michael Matt, editor of the Catholic newspaper The Remnant. For beatification, the Vatican must conclude that Pope John Paul is responsible for a miracle, as evidence that he is in the presence of God and can help people with their prayers. In John Paul's case, the Vatican says a French nun was healed from Parkinson's disease after praying to the late pontiff. But Matt says there are questions surrounding that miracle — some reports suggest her symptoms may have come back, and other reports raise questions about whether she had Parkinson's disease.

"So when you combine those sorts of question marks about the science, about the miracle, about the cure, many of us are very concerned about the reputation of our own church, and about the scandals that could come out after this," Matt says.

Concerns About The Sex Abuse Scandal

Matt is even more troubled that the Vatican is fast-tracking "the pope who presided over the single greatest clerical sex abuse scandal in the history of the church."

More On The Miracle

After John Paul II's death in April 2005, nuns belonging to the Little Sisters of Catholic Motherhood in France and Senegal began praying for him to intervene with God to heal one of their sisters. French Sister Marie Simon-Pierre, who had been diagnosed with Parkinson's disease, saw her condition worsen until June 2, according to Catholic News Service.

That day, she wrote John Paul II's name on a piece of paper with a trembling hand, according to the Catholic News Agency. By that night, she had improved — and by the next morning, she felt completely cured, she says. (You can watch a video of Sister Marie Simon-Pierre describing her experience.)

Questions have been raised about the accuracy of the diagnosis and whether it can be certain her symptoms won't return. But "Vatican sources said that, in the end, the experts were satisfied that it was Parkinson's, and that there was no scientific explanation for the cure," CNS writes.

John Paul might not have been directly responsible, he says, "but at end of the day, the church has undergone this terrible period in which there was a dereliction of duty at every level of the hierarchy, including, it would appear, at the level of the papacy."

For example, John Paul failed to punish the American bishops who protected pedophile priests; Cardinal Bernard Law was moved to a prestigious post in Rome after the sex abuse scandal erupted in Boston. And he neglected to investigate the priest who founded the Legionaries of Christ, Marcial Maciel, despite mounting evidence that Maciel had abused countless children.

Dolan says the pope was initially slow to recognize the problem. But once he did, he summoned the U.S. bishops to Rome and told them to fix it.

"So there might be some glitches and there might be things that when you look back, you say, 'Boy, I wish that would have been responded to in a different manner,' " he says. "But overwhelmingly, you're talking about a man of radiant virtue and extraordinary sanctity."

Novak, the theologian and author, says all these objections pale next to the late pontiff's virtues.

"Surely this man was so thoroughly known, and there were so many witnesses to his holiness, that if for anybody there could be a fast track, it should be for him," he says.

With the beatification ensured, the Vatican will be looking for a second miracle that would elevate John Paul to sainthood.