Accessibility links
Ice-T, From 'Cop Killer' To 'Law & Order' Ice-T hustled in his early days and performed with Body Count, known for their song "Cop Killer." In 1991 he got his big break playing a cop in New Jack City. And he's still carrying a badge — on TV — for Law & Order: SVU. In his memoir, Ice, he shares his story, from gangbanging to making it in Hollywood. 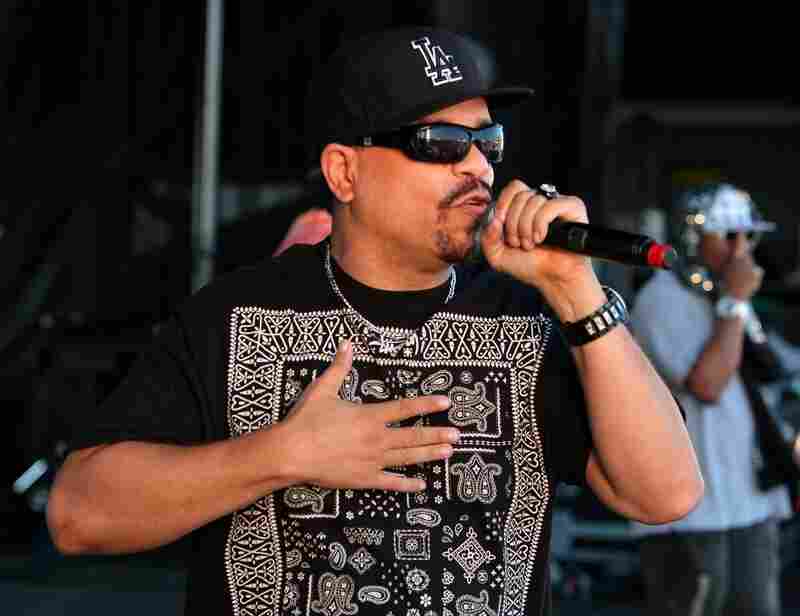 Ice-T, born Tracy Marrow, moved to Southern Los Angeles as a child, after he lost both of his parents to heart failure. Even at a young age, "I knew I was going to have to make it on my own," he says. Andrew H. Walker/Getty Images hide caption 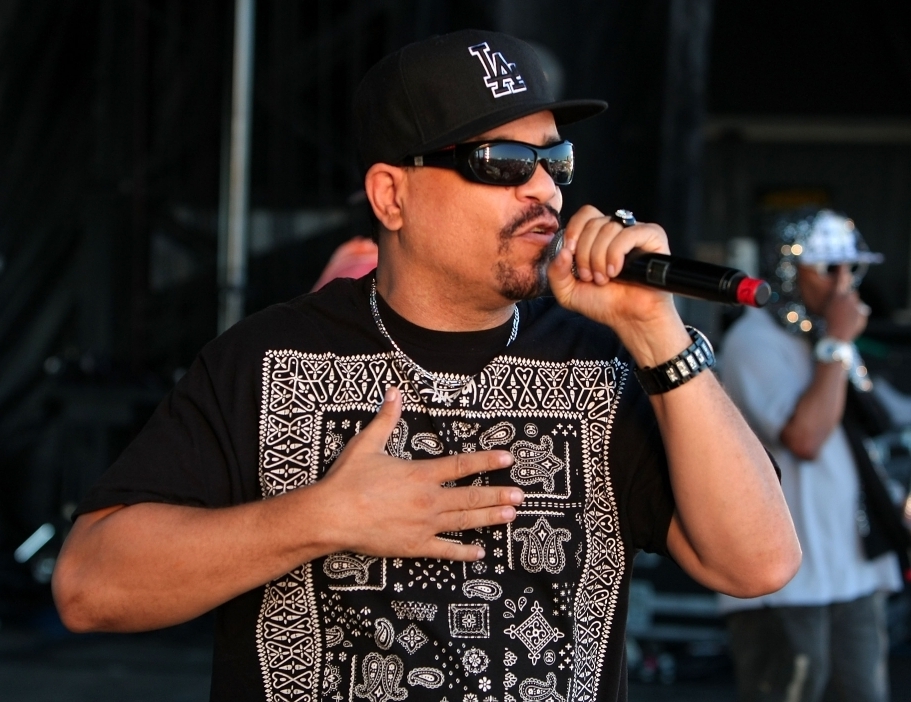 Ice-T, born Tracy Marrow, moved to Southern Los Angeles as a child, after he lost both of his parents to heart failure. Even at a young age, "I knew I was going to have to make it on my own," he says.

Ice-T hustled in his early days and performed with Body Count, known for their song "Cop Killer." But in 1991 he got his big break playing a cop in New Jack City. And he's still carrying a badge — on TV — for Law & Order: SVU.

In his memoir, Ice, he shares his story, from gangbanging to making it in Hollywood. He was born Tracy Marrow — some people still call him Tracy. "They're trying to let me know that they know me, you know, personally," he tells NPR's Neal Conan. But most of his real friends call him Trey or Berg, short for Iceberg.

It wasn't easing growing up as a boy named Tracy. "Johnny Cash had a record called "Boy Named Sue," so if you give a boy any name that could be considered a girl's name, he's going to grow up tough," Ice-T says. So he went by Trey until he picked up some books by pimp turned author Iceberg Slim. People would say to him, "Say some more of that Iceberg stuff, T," which turned into Ice-T — cool T, for Tracy.

Ice-T says he idolized Slim in high school — and even tried his own luck at pimping. But then, he says, it dawned on him that the author he admired so much was an author first. "I'm like, if I really want to be like him, instead of worrying about really living it out, let me document the game. That's why I respect [Slim]." 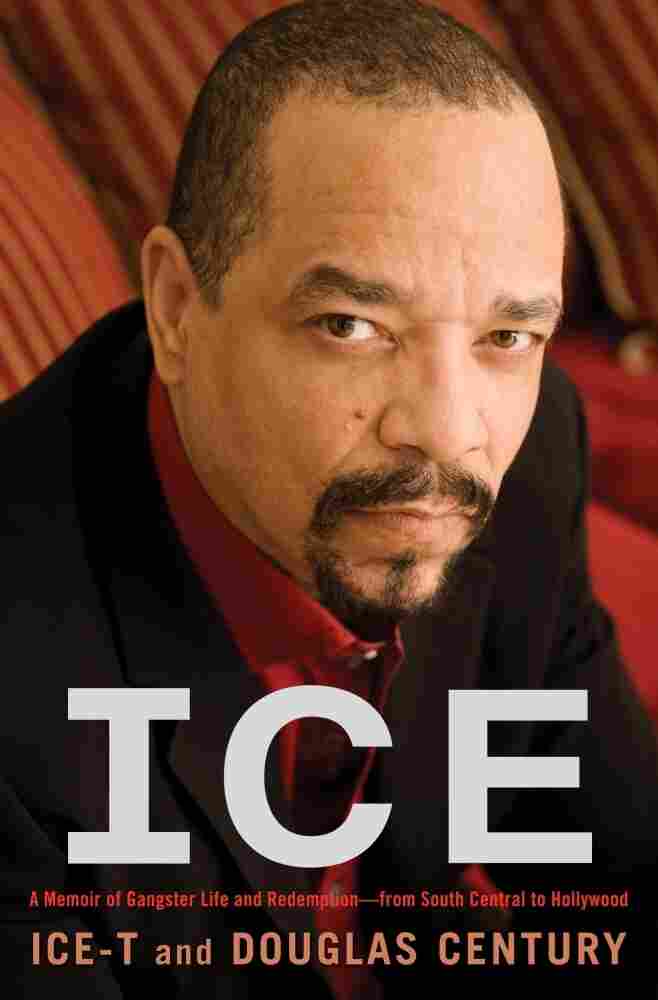 That's when Ice-T started to turn things around. "My life was kind of crazy at the time; I was out there breaking the law," he remembers. But then he started making music instead. "I made music about that lifestyle, in an attempt to kind of mimic Iceberg Slim, through music," he explains.

He took some license as a lyricist. "I couldn't possibly have lived all the things that Ice-T on the records lived," he says. "I did what I called 'faction.' It was like factual situations — not always from me — put into fictional settings. That way I could create these great adventures and these great stories." The event had to come from a true story — like a brush with the law — and then he'd combine all the details with his own material to write songs. If everything in his songs were 100 percent true, "I wouldn't be standing here today," he says. "Ice-T in the music has done some outrageous things."

Ice-T lost both of his parents as a child — his mother when he was in the third grade, his father when he was in the seventh, both to heart failure. After his father died, he moved to Los Angeles to live with an aunt. Though she lived in a middle-class neighborhood, he chose to attend Crenshaw High School, "the roughest high school, probably, in the country." And that's where he ran into L.A.'s well-populated gangs.

He and a few kids from his neighborhood started their own gang of three — they knew they were far outnumbered by other gangs, but "[we] convinced the school that we had a gang," Ice-T says, "that there were more of us; you just don't know us." Their improvisation worked, and other gangs kept out of their way.

He admits that he still got in plenty of trouble, hustling and stealing. "There's no sense in me trying to come out as a musician and just act like I never did it," he says. "Somebody's going to say, 'Hey, this guy's no angel.' " But as he got more opportunities, he tried to make the right decisions. He knew he could never escape his past, so he might as well come out with it early.

"It's stuff that you never get rid of," he says, "when you come from that environment, that violent background." At nice parties, he says he still looks for the escape routes. "You can see me at a nice party in the Hamptons someplace and I'll have my back up against the wall. It's stuff that just gets stuck in you for life."

But he's made it work. "Who would ever have thought a kid from South Central who was in serious trouble would end up on television playing a cop?" he asks. "I had to start making some right decisions, sooner or later."

Because I first made my name as a rapper claiming South Central L.A., people often assume I'm strictly a West Coast cat. But my family was actually from back East. I was born in Newark, New Jersey, and grew up in Summit, an upscale town in north Jersey. There was this tiny area of Summit where most of the black families lived. My parents and I lived in a duplex house on Williams Street. And on the street right behind us --backyard to backyard — was my aunt, my father's sister.

For my first few years, it was just a real middle-American life.

I don't remember taking any trips or anything exciting. One thing I do remember, when my dad would take me places, he would get White Castle burgers and throw me in the backseat, and he expected me to eat my White Castles and be quiet. My dad and I spent a lot of time together not saying anything. I went to the YMCA, where I learned how to swim and do gymnastics. It was kind of a big deal to have a membership to the Y, because it meant your Pops had money to spend on you. I remember going from Pollywog to Dolphin, then graduating to Shark and Lifesaver, and I'm pretty proud of the fact that I learned to be a good swimmer.

There wasn't any violence or trauma. It was quiet, simple, and suburban. An almost perfect childhood — except, for me, every couple years, losing a parent...

My father's family came from Virginia and Philadelphia. He wasn't a brother who talked a lot. He was a workingman, a quiet, blue-collar dude. For years –decades — he worked at the same job. He was a skilled mechanic at the Rapistan Conveyer Company in Mountainside, fixing conveyer belts. Despite the fact that Summit is predominantly white, I can't say there was overt prejudice in the town, at least not within the adult world as I observed it. All my father's friends, all the guys he worked with, were white working-class dudes. Lunch-bucket dudes. Black and white, they were all cool with one another.

My father was a dark-skinned brother, but my mother was a very fair-skinned lady. From what I understand she was Creole; we think her people originally came from New Orleans. She looked almost like a white woman, which meant she could pass — as folks used to say back then. Her hair was jet-black. She was slim and very attractive. I recall people telling her she looked like Lena Horne or Dorothy Dandridge.

The fact that my mother could pass intrigued me, even as a little kid. I understood that it was a big fucking deal. In my household, it was often a topic of quiet discussion between my parents. When you can pass, you get to hear the way white people speak freely with one another when black folks aren't around. You get that kind of undercover look at the way white folks really think. So my mother understood racism intimately, from both sides of the fence, and there was never any tolerance for it in the house.

As hazy as a lot of my childhood is to me, I do have a very clear memory of the day when I first learned I was black. Before that, I guess, I never really knew I was black. Everybody figures out there's something called "race" at some point in their life, and for me it happened when I was about seven years old.

At the time, I was going to Brayton Elementary School in Summit, and I used to have a white friend named Alex. He was one of my closest friends in school. Alex and me were walking over to his house one day after school and we bumped into this other kid from our class named Kenneth — he was one of the few other black kids who went to Brayton with me. Soon as we ran into Kenneth, Alex told him, "Kenneth, you can't come over." Kenneth looked pretty bummed out but he just walked on, head down, kicking the curb the way little kids do. Then we ran into some more kids from our class and Alex had no problem inviting them to his house to play. We walked along the sidewalk in silence and the question just popped into my head.

"I thought you told Kenneth you couldn't have any more friends over?" I asked.

He said that shit so matter-of-fact. I didn't understand it. My mind was trippin' the rest of the afternoon.

Damn, I thought, Alex must think I'm white. I guess I'm passing, too.

Now, I had this other white friend named Mark, and the rules at his place were a little different than at Alex's. All the kids could come over to Mark's place to play in the yard, but when it got dark outside, as soon as the twilight made it hard to see, the white kids were allowed to come inside the house and keep playing but the black kids were sent home. Nobody asked any questions. Nobody said shit. It was just accepted as the way things were. And I was still considered "white enough" — or maybe they were just confused about what exactly I was — that I could stay and play with the white kids while the handful of black kids just split.

It was confusing as hell. When I got home, I told my mother about it. She looked at me with this half smile.

That was her line. It's one of the things I recall her saying to me a lot. People are stupid. She didn't break that down for me, but I understood her to mean: You can't necessarily change the ignorant way people think — but you can damn sure control the way it affects you personally. And then you keep it moving.

I guess my mom was preparing me in her own way, simply by downplaying it, telling me that this was some bullshit – racism — that I was going to be dealing with in some way or another for the rest of my life. Even today, I find myself constantly saying those same words under my breath: Yo, don't even sweat it. People are stupid.

Excerpted from Ice by Ice-T and Douglas Century. Copyright © 2011 by Ice-T. Excerpted by permission of One World/Ballantine, a division of Random House, Inc. All rights reserved. No part of this excerpt may be reproduced or reprinted without permission in writing from the publisher. 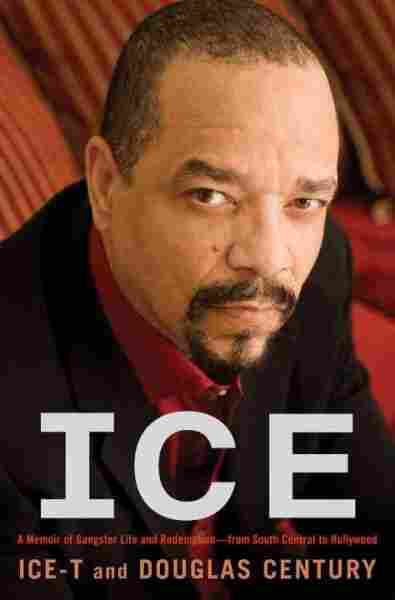 by Ice-T and Douglas Century