Accessibility links
GOP Budget Architect Paul Ryan Heads Home To Mixed Reviews House Budget Committee Chairman Paul Ryan has drawn huge crowds at listening sessions in his Wisconsin district. While a few constituents have asked him to run for president in 2012, others have raised a slew of concerns, from what will happen to their medical coverage to Ryan's plan to cut taxes for the wealthy. 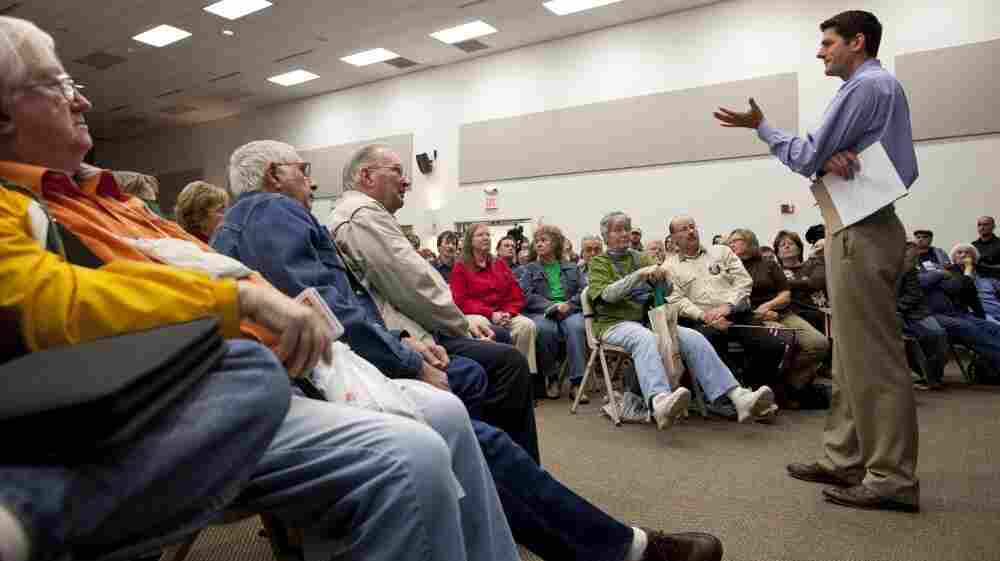 Rep. Paul Ryan (R-WI) speaks during a public meeting Tuesday at Gateway Technical College in Kenosha, Wis. His plan to fundamentally restructure Medicare and cut social safety net programs like food stamps and Medicaid has at times been a tough sell as its supporters head home and meet with their constituents. Jeffrey Phelps/AP hide caption

House Budget Committee Chairman Paul Ryan is back home in Wisconsin this week, and facing some tough crowds who don't like his budget plan.

The plan, passed by the House earlier this month, calls for major changes in Medicare and Medicaid, and cutting tax rates for the wealthy.

In normal times, Ryan's listening sessions draw just a handful of people — but that was before he became a GOP rock star. His district meetings now draw overflow crowds.

On Tuesday, about 200 people crowded into the City Hall in Lake Geneva. As national television crews looked on, Ryan asked the audience to dispel the image forged in the state's ongoing collective bargaining fight that people here can no longer get along.

"Let's prove to these press people that Wisconsinites can have civil debate — that we can treat each other with respect," he said.

Most constituents have been civil, even when some in the crowd boo Ryan. But it's clear that the audiences are politically divided. A few have asked the congressman to run for president in 2012, something he says is not going to happen.

Supporters like Maria Melenzio-Kinsey said Ryan's budget plan tries to head off severe economic problems in the years ahead — and she calls it courageous.

"The whole United States, you're standing up for," she said to applause. "Thank you, thank you."

But Ryan concedes that his budget plan counts on getting more people back to work, meaning less reliance on the government safety net.

Before a listening session in the Village of Paddock Lake, Bob Pringle said a tax cut could persuade the well-heeled to create more jobs.

"It's probably important for people you want to start up and restart a business," he said. "Unfortunately, a lot of people think all these rich people don't do that — but they do." 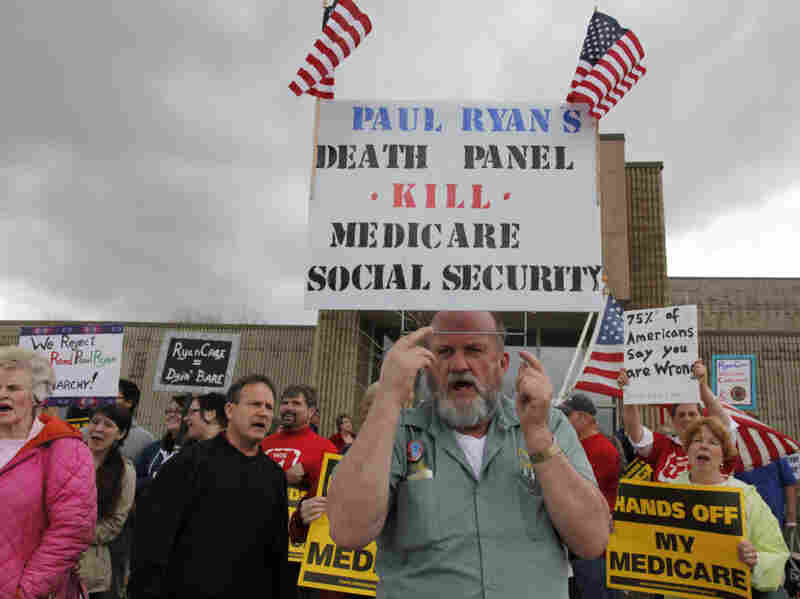 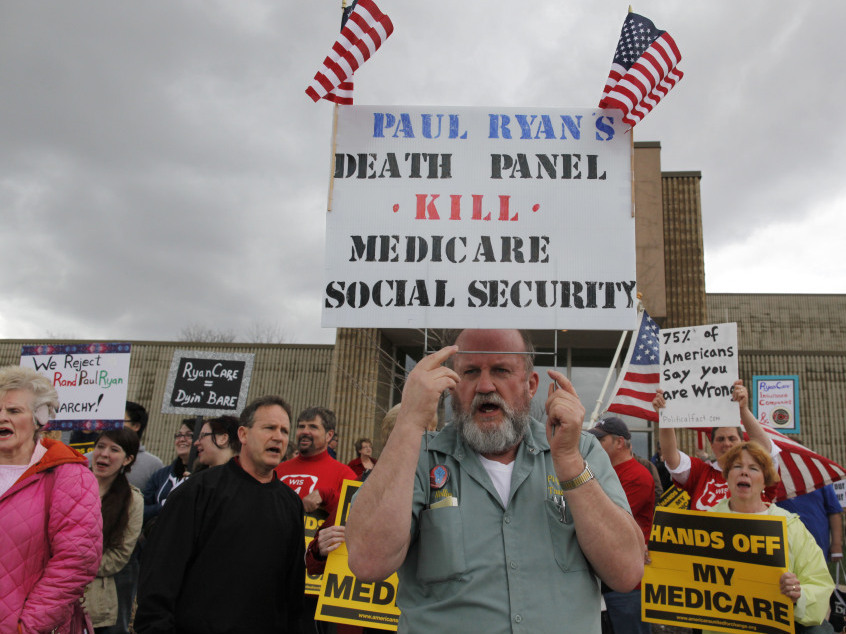 Protesters in Kenosha, Wis., stand outside one of Ryan's listening sessions.

Pringle already receives Medicare, and like other seniors wouldn't be affected by Ryan's plan to relegate those under 55 to enter a voucher program for Medicare.

It's the Medicare proposal that seems to be generating the most heat at these listening sessions. At a rally outside Ryan's event in Kenosha on Tuesday, protesters chanted, "Hands off Medicare" and "Ryan stop lyin'."

One of those protesters, Brian Prell, said Medicare vouchers wouldn't keep up with the rising costs of health care.

"He's gonna save us money by cutting some of our social programs, but yet he's going to give that money, that same money, back in tax cuts to the people that least need them?" Prell said. "To me, that is pretty much lying — that's two-faced, that's dishonest, that's Paul Ryan in a nutshell."

Prell said he doesn't believe Ryan's argument that trimming tax loopholes for the wealthy and corporations would offset cuts in tax rates.

Ryan acknowledges the House budget is going to have a tough time passing the Senate and competing with the president's proposal, which seeks smaller changes in Medicare. When asked at one session if it'll take a Republican election sweep next year to get his program enacted, he said he would push for compromise this year.

"We're not going to get a grand-slam budget agreement. But hopefully, we can get a single, or a double, or maybe a triple," he said. "It's baseball season, so I'm gonna use baseball analogies."

But Democrats hope voters will toss out swing-district Republicans who support Ryan's plan in the next election — and, sticking with the baseball analogy, send Ryan and his budget plan to the showers.