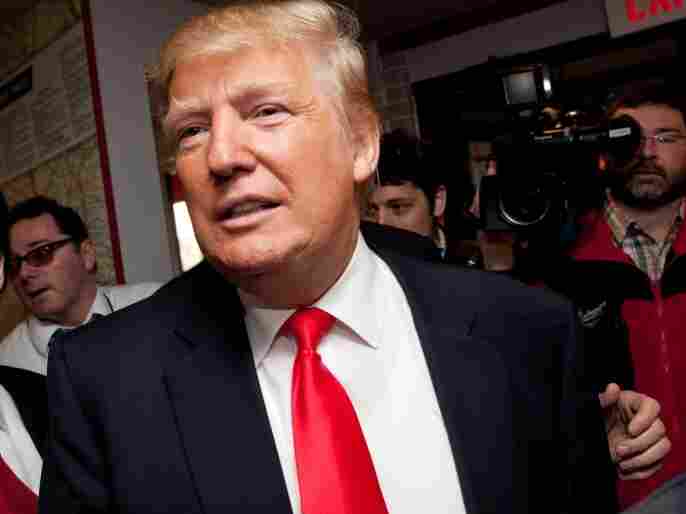 Donald Trump arrives at the Roundabout Diner in New Hampshire. Trump has questioned President Obama's status as a citizen of the U.S. He was answered this morning when the Obama administration released the President's birth certificate. Matthew Cavanaugh/Getty Images hide caption 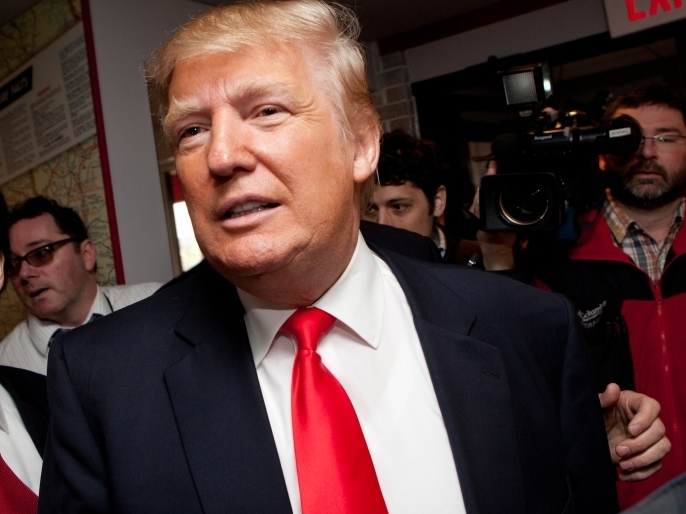 Donald Trump arrives at the Roundabout Diner in New Hampshire. Trump has questioned President Obama's status as a citizen of the U.S. He was answered this morning when the Obama administration released the President's birth certificate.

Read A Different Opinion On The Birther Movement

If there were any doubts about the racial animus driving Donald Trump's attacks on Barack Obama, the billionaire reality show star exposed himself with his latest conspiracy. On Monday night, Trump questioned how Obama could possibly have been admitted to Ivy League schools, since Trump "heard" Obama was a "terrible student." Trump told the AP that he was investigating the issue, whatever that means, just as he claims to have dispatched investigators to Hawaii in order to find the President's famous birth certificate.

"How does a bad student go to Columbia and then to Harvard?" Trump said. "I'm thinking about it, I'm certainly looking into it. Let him show his records."

In GOP politics, attacking racial minorities as the underachieving beneficiaries of affirmative action is a very old move. Sen. Jesse Helms produced the most notorious example, an ad against his black opponent, Harvey Grant, which blasted affirmative action for taking jobs from deserving white people and giving them to minorities. Even that dark salvo, however, was putatively linked to jobs and active policy debates. Trump is not so smooth. He is blatantly attacking Obama's teenage qualifications for college — a topic so obscure, it was a non-issue in Obama's exhaustive, two-year-long presidential campaign. Coupled with the rage of the Birthers, Trump's adopted conspiracy crowd, the mogul looks more like he is auditioning for a talk radio gig than the presidency.

Still, racial dog whistles only work when a lot of people play along. Otherwise a coded attack — aimed at the racists but clinging to deniability — curdles into public, blatant racism. (That's bad in politics and business, so it would restrain even a business candidate like Trump.) So far, the press has been quite delicate when confronting Trump.

"...how could a person from Mr. Obama's humble background and academic achievements get into Harvard? Trump's inference is that Mr. Obama is a cipher, cannot be trusted and is concealing a dark secret."

What is this dark, untrustworthy cipher-secret? I don't see Trump saying that the President of the United States is a cipher — a zero or nonentity — but rather that back in the day, Obama was not good enough to get into college without a racial boost.

Even respected liberal commentators have given Trump something of a pass for the racial tension animating Birtherism. Hendrik Hertzberg, the authoritative essayist, argues in this week's New Yorker that Trump's appeal to birtherism is "part of a larger pattern of rejection of reality" by Republicans, like denying the science of global warming, or believing that "contraception causes abortion."

I think that a loose relationship with the scientific method surely helps conspiracies spread, but Birtherism draws on passions that depart substantially from greenhouse gases. It is a putatively non-racial, vaguely constitutional way to challenge the legitimacy of the first black president and appeal to racists without sounding officially racist. Sure, there may be plenty of GOP tenets running counter to reality nowadays, yet none evoke the suppressed fury of the Birthers. They won't go away. They are an audience-in-waiting for any amplified race-baiter, from Lou Dobbs to unserious presidential candidates. Indeed, Politifact, the fact-checking site for politics, says its article about the issue, (with a link to the certification of live birth!), is the most read item that it has ever published.

I asked Hertzberg about his formulation, and while he wouldn't "exclude racist undertones," he said the attack is "more about identity." "Obama's erudition, his ivy-league-ness, his urbanity, his citizen-of-the-worldness, his foreign-sounding name, his respect for the authority of reason and science, his 'aristocratic' 'aloofness' (all of which I love, of course) are equally or more part of the package," Hertzberg proposed in an email.

The analysts who have directly called out Trump's race-baiting, to their credit, have tended to come more from the credentialed blogosphere or opinionated television. At the Daily Beast, Andrew Sullivan observes that Trump had thrown down "the affirmative action card to pump up the GOP base," and it's time to take stock: "We might as well concede it: these are racist smears." At Salon's War Room blog, Alex Pareene wrote a crisp lede in his story on the emergence of SATs on Trump's publicity tour: "Donald Trump added a blatantly race-baiting component to his already racially charged campaign against Barack Obama's Americanness this week.... " Over on cable, MSNBC's Lawrence O'Donnell has been especially strong in calling out Trump, a fellow NBC star, noting that he has become a "hero" to racists. Fareed Zakaria, opting for truth over balance at CNN, flatly dispatched Trump's birther crusade as "shame[ful] coded racism."

Meanwhile, another CNN story topped the political blogosphere this week, (according to data from Memeorandum), under the bizarre headline, "CNN investigation: Obama born in U.S."

Does anyone, at any news organization, consider this news? Of course not. Launching another "investigation" into Obama's birthplace in 2011 and "reporting" the results is not really objective journalism. It is an overreaction to conspiracy theories, masquerading as fact-checking. Let's leave the politicized, air-quote investigations to Trump. The facts in this area have been established. The only thing left to do is call out the lies — and the racism.
--
Updates: In New Hampshire on Wednesday, Donald Trump claimed credit for the White House release of Obama's "long form" birth certificate, and declared that the President should "get off his basketball court" and focus on gas prices. The dog whistles are getting less subtle.

While the New Yorker's Hendrik Hertzberg did not think race was the primary factor driving Trump's attacks, David Remnick, The New Yorker's editor-in-chief and the author of an accalimed book about Obama's background, published an unusually blunt critique of Trump's "race-baiting" on Wednesday afternoon. "What is there to say anymore about Donald Trump?," Remnick asks. "That he is an irrepressible j- - - - - - who thinks of himself as a sly fox? That he is a buffoon with bathroom fixtures of gold? Why bother, after so many decades? There is no insulting someone who lives in a self-reinforcing fantasy world." Remnick, a scrupulously measured writer, says we must face facts: "to do what Trump has done (and he is only the latest and loudest and most spectacularly hirsute) is a conscious form of race-baiting, of fear-mongering. And if that makes Donald Trump proud, then what does that say for him?" (Read the entire piece here.)

Finally, over at Jack and Jill Politics, a blog focused on black issues, Cheryl Contee responds to this article and analyzes Trump's "very savvy racism." "I've heard resentment over college affirmative action from even liberal friends," she writes, "it's a huge source of racial resentment."