Accessibility links
Obama Chides Media For Role In 'Birther' Controversy The president released his birth certificate to quell persistent rumors he was not born in this country. In doing so, he said that for too long the nation has been distracted from weighty matters by "sideshows and carnival barkers." 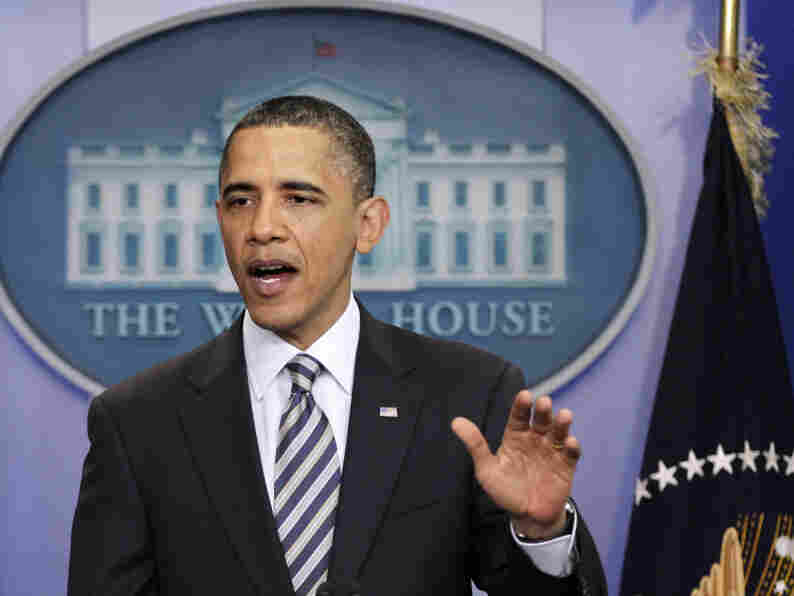 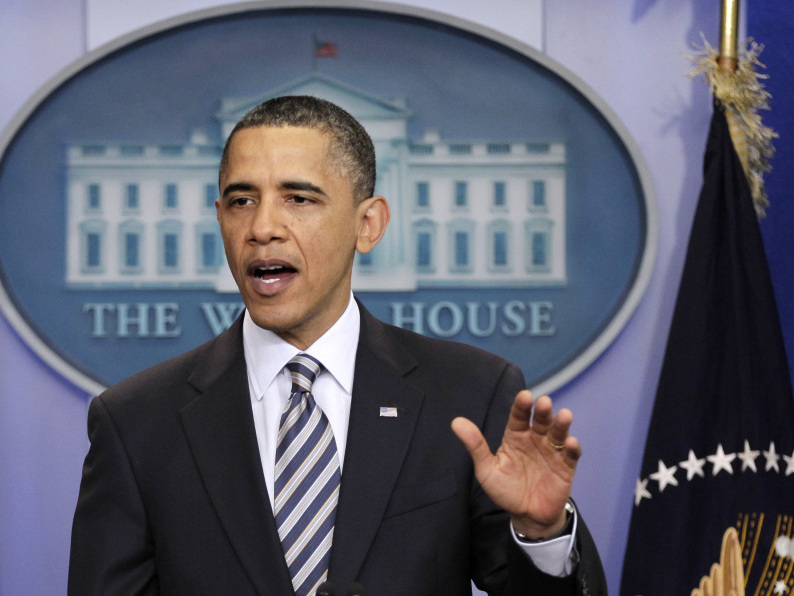 President Obama speaks Wednesday to reporters about the controversy over his birth certificate.

There comes a moment in almost every American presidency when the commander in chief turns media critic in chief.

For President Obama, that moment occurred Wednesday morning. He released his birth certificate to quell persistent rumors that he was somehow not born in this country — and his remarks were carried live by the nation's leading cable news channels.

"Let me just comment, first of all, on the fact that I can't get the networks to break in on all kinds of other discussions. I was just back there listening to Chuck [Todd of NBC News and MSNBC]," Obama said. "He was saying, 'It's amazing that he's not going to be talking about national security.' I would not have the networks breaking in if I was talking about that, Chuck, and you know it."

Obama said that for too long the nation has been distracted from weighty matters by "sideshows and carnival barkers." While he did not name whom he meant, the barker he had in mind was a specific New York City real estate developer, reality show host and putative potential Republican presidential candidate. Donald Trump lately has been boasting that he has sent a squad of investigators to Hawaii to pin down the facts of Obama's birth and that people would not believe what they were finding.

Notice, however, the president's words didn't criticize the carnival barker; he criticized those who get distracted, such as the members of the press corps sitting in front of him as he made his remarks.

This seemingly fabricated issue has dogged Obama for three years. It first emerged in the 2008 Democratic presidential primaries and has periodically surfaced in the media thanks to renewed claims of skepticism by a small minority of his critics.

The Obama campaign originally released his certification of live birth — the state record given out by Hawaiian officials to people wanting their own documents, and used for official purposes — to quell questions of whether he was actually listed as a Muslim (he wasn't) or whether his middle name was "Muhammad" (it isn't).

The question has previously been settled by journalists from FactCheck.org, CNN, PolitiFact and The New York Times, among many other news outfits. PolitiFact went so far in 2008 as to title one entry "The Final Chapter." It did so again in 2009. And PolitiFact has updated the Obama birth certificate file at least twice in the past month. 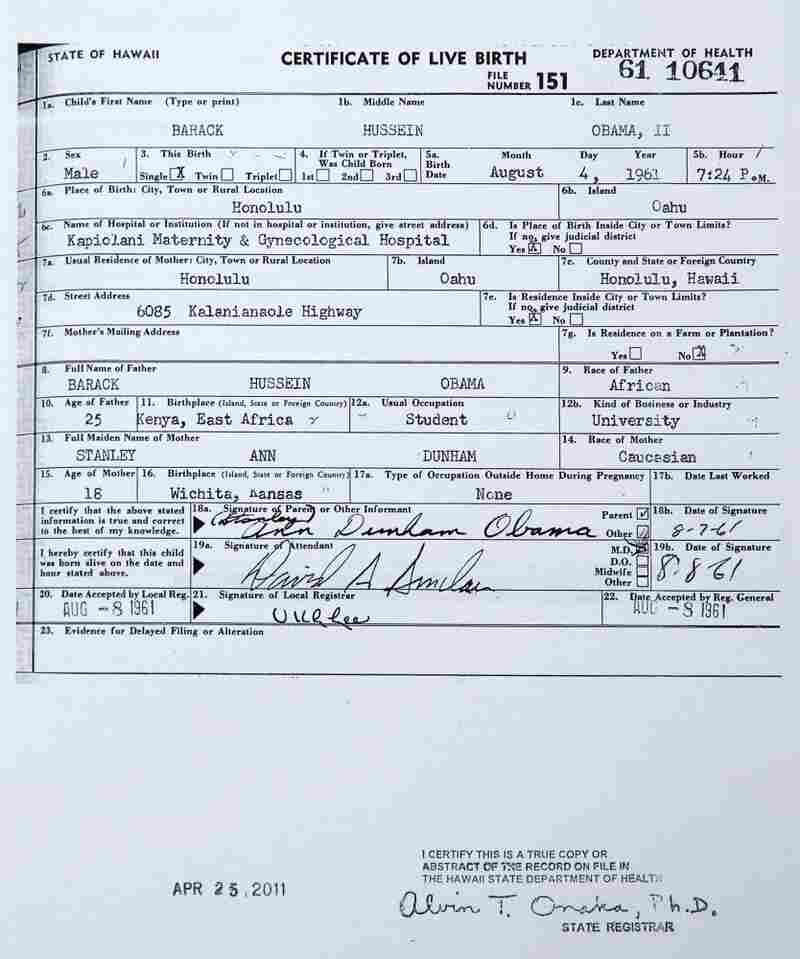 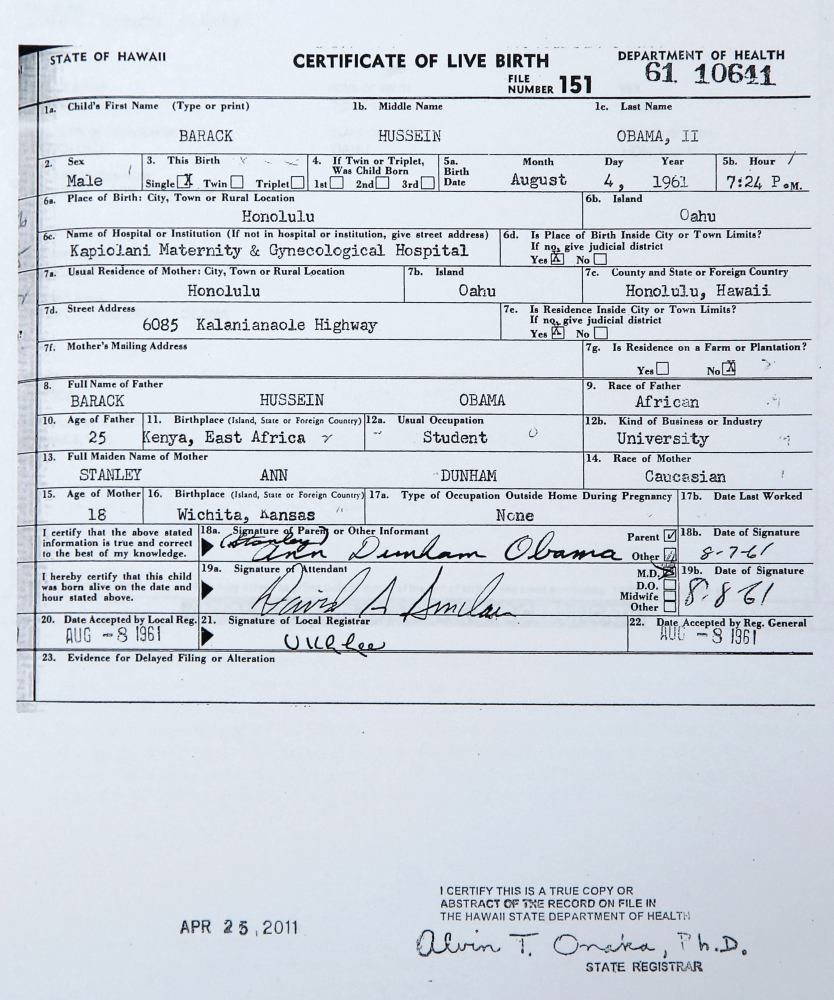 This handout image provided by the White House shows a copy of the long form of President Obama's birth certificate.

Many leading Republicans, including Karl Rove and House Majority Leader Eric Cantor, have recently taken pains to dismiss such claims as untrue and counterproductive. But recent polls reflect that a sizable minority of Americans question Obama's birth. The latest poll by The New York Times and CBS found 45 percent of all Republicans say they believe he was born in another country.

Clara Jeffery, co-editor-in-chief of the left-of-center Mother Jones magazine, says the media helped to perpetuate the "birther" myths. Mother Jones dedicated its most recent issue to the question of why people still believe recurring and disproved claims.

Some recent television interviews, and there have been many, notably failed to contradict Trump or others contending there was doubt about where Obama was born. NBC's Meredith Vieira challenged Trump only lightly; ABC's Christiane Amanpour let similar remarks pass from the Rev. Franklin Graham without objection.

"The president, I know, has some issues to deal with here. He can solve this birth certificate issue pretty quickly," Graham said last Sunday on ABC's This Week. "I don't know why he can't produce that."

Today, Obama said that during the budget battle two weeks ago, "the dominant news story wasn't about these huge, monumental choices that were we're going to have to make as a nation. It was about my birth certificate!"

That would appear to be a flat-out exaggeration. That week the economy got nearly two-fifths of all coverage, much more than any other topic, according to a regular survey of news coverage by Pew's Project for Excellence in Journalism.

But Obama appeared to be directing his rhetoric most directly at the cable news networks.

And a review by Pew's journalism project found that cable news did devote a lot of time to the matter. It's hard to pin down precisely how much coverage each cable network dedicated to the "birther issue" because many of those stories are incorporated within larger categories such as the 2012 presidential campaign and the Obama administration.

Mark Jurkowitz, associate director of the Pew project, told NPR that MSNBC devoted the most time to political matters; Fox was next. However, MSNBC has an openly liberal outlook on most of its opinion shows and often spent time disputing the claims. Fox News' opinion lineup is predominantly and strongly right of center.

The liberal watchdog group Media Matters for America says that since early March, guests made false claims in 52 segments about Obama's birth certificate, but that Fox News hosts or anchors disputed those claims in just eight instances.

Nonetheless, in recent days, Fox News anchors such as Shepard Smith and Bill Hemmer threw cold water on doubts regarding the president's birth.

In recent days, CNN correspondent Gary Tuchman traveled to Hawaii and conducted on camera an interview of the Republican former Hawaiian secretary of health who had examined Obama's actual birth certificate. Tuchman also interviewed another person born on the same hospital wing at the same time.

"We've spent a lot more time, to the degree that we've covered this story ... focused again on what the real facts are, with reporters on the ground, as opposed to just what Trump was saying," Mark Whitaker, CNN's new managing editor for global newsgathering, tells NPR.

Whitaker has brought a renewed emphasis on in-depth reporting to CNN, with recent extended looks at BP's role in the Gulf of Mexico and on safety questions in the air traffic control system. In this case, Whitaker says, CNN helped to discredit Trump.

Yet immediately after Obama stopped speaking, CNN cut to a shot of the discredited Trump in an airport hangar in New Hampshire.

"The alternative is to ignore him — right? To ignore the news. Which is not something we do," Whitaker said.

According to Whitaker, as Trump spoke, he made fresh and misleading claims about the strength of his standing in a CNN poll involving possible Republican presidential candidates.

So, breaking news: The president was born in Hawaii. It's as true today as it was in August 1961.