Accessibility links
Royalty, Schmoyalty: Revolting Against The Wedding Many in the United States are embracing the royal wedding as if it was America's own. One study says U.S. media is devoting more coverage to the event than their British counterparts. But if you listen carefully amid all the clatter, you can hear a few voices representing America's anti-monarchical origins.

Royalty, Schmoyalty: Revolting Against The Wedding

Royalty, Schmoyalty: Revolting Against The Wedding 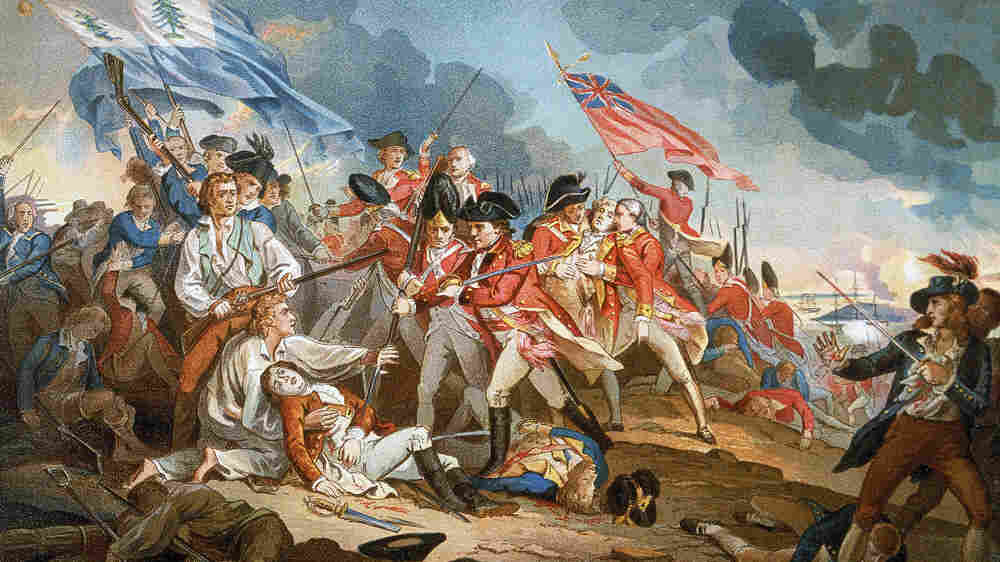 British forces clash with colonial militia during the Battle of Bunker Hill in 1775, as depicted in an illustration. Hulton Archive/Getty Images hide caption

If you listen carefully — amid all the royal wedding clatter about Prince William popping the question on an African vacation, Kate Middleton keeping her gown's designer a secret, the bride-to-be's arrival in a Rolls-Royce at Westminster Abbey, the post-ceremony horse-drawn carriage rides to Buckingham Palace and the rest of it — you can hear a few voices representing America's anti-monarchical origins.

"Of all the annoying things about the royal wedding — the crass materialism, the outrageous invasion of a young couple's privacy, the bad TV — none is more troubling, than the occasion this event gives for the non-English to transform themselves into besotted Anglophilic wusses," Mark Oppenheimer recently wrote in Slate. "Americans are supposed to loathe and reject monarchs."

Some Brits Joyously Await Wedding, But Many Don't

The British Empire, under the guidance of the royal family, "has spilt more blood around the world and caused more oppression and suffering in the world than any other regime still standing," Lawrence O'Donnell said on MSNBC. "If your people were among the tortured or the starved or murdered or the oppressed victims of the crown, you may not be so welcoming of the British royal family in your home, even on your television screen."

Many Americans are embracing the event. The traditional U.S. media have served up a greater percentage of stories and broadcasts about the wedding of Wills and Kate than the British media, according to The Nielsen Company. The research firm has analyzed "online buzz" in the United States, United Kingdom and Australia since the announcement of the engagement in November 2010. And there will be a multitude of new and novel ways to follow the proceedings — on Facebook and Twitter and scads of live streaming websites.

But other Americans are not bowing to the crown or buying in to Her Royal Hypeness. Less than 30 percent, according to a New York Times/CBS poll, said they are following the wedding news closely.

And here and there in the New World, you can hear neorevolutionaries raising antiroyalist questions such as: Didn't our forefolks shed blood so that we wouldn't be subjected to royal weddings? Are True Americans really going to wake up before 6 a.m. on Friday to watch such monarchical malarkey? And where are the original Tea Partiers when you really need them?

Americans have always been conflicted about British royalty, says Joanne Freeman, who teaches American history at Yale University. Even during the American Revolution "we were revolting against Britain — eventually, revolting against not just the king, but against monarchy generally — and yet we were awe-struck by all things royal and British-genteel."

During the colonies' rebellion, she says, young American officers were impressed by British soldiers, such as Major John Andre, "who seemed to be everything they were not — highly educated with refined high-British manners, a poet/artist/playwright/ladies' man, etcetera."

Equally easy to forget, she says, is how long it took many Americans to surrender all loyalty to King George. "They turned on Parliament long before they gave up all appeals to the King," she points out. And "many Americans even assumed that, sooner or later, the Constitution would fail and the United States would settle back into some kind of monarchy."

Many people even eyed George Washington suspiciously for signs of a king-in-the-making, Freeman adds.

That double-edged attitude toward the mother country continues today. 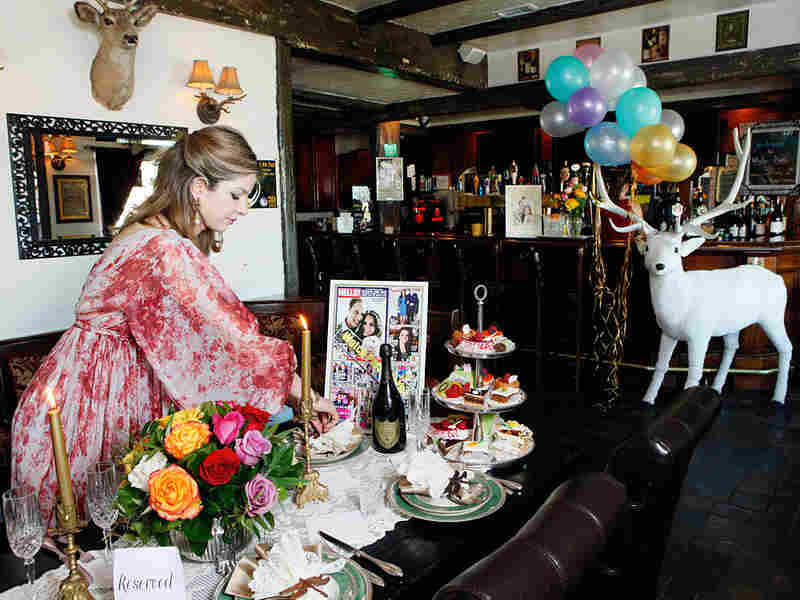 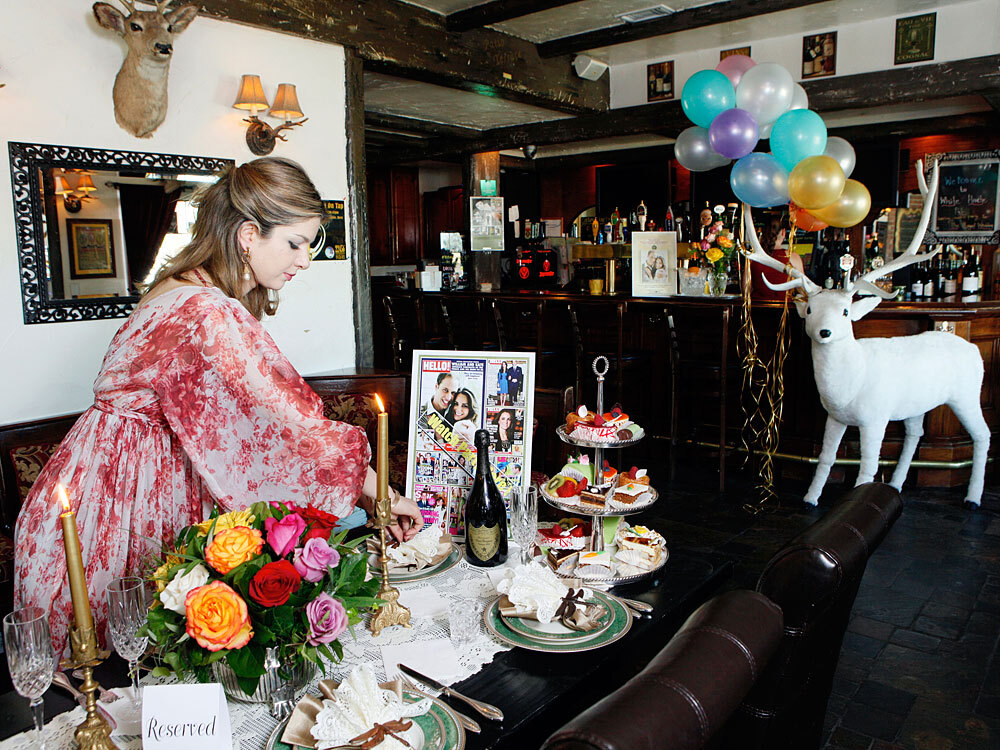 Golriz Moeini decorates her White Harte Pub with items she plans to use for a royal wedding watch party in Woodland Hills, Calif.

Though Great Britain offered culture and refinement to the nascent United States, it also represented less discipline and democratic ideals. From its very dawning, America worried about the influence of "decadent and aristocratic" European societies, says Carol Berkin, a history professor at Baruch College of the City University of New York.

Early American leaders "warned against the admiration of kings and queens and luxury-loving nobility," Berkin says. "They said such things would weaken or destroy the basis of the new nation: republican simplicity and virtue."

At the same time, in the early 19th century, American elites flocked to Europe to see the very decadent world they claimed to abhor, she says. "The fascination with royalty and nobility and their aristocratic lives has ... been a constant in a society that embraces — and honors in the breach — equality and democracy."

Besides, royalty apologists point out, the United States has its own brand of class consciousness. And Berkin agrees. "We have always created our own 'aristocracy' to fill the gap," she says. "Think of movie stars and rock stars. Think — unpleasant as it may be — of Charlie Sheen. The fascination with people who live outside the bourgeois values of America will always be fascinating to those who live within them."