Accessibility links
Fatah, Hamas Deal Could Affect Mideast Peace Process Palestinian officials are preparing to seek a resolution from the U.N. General Assembly declaring statehood. Israeli officials have criticized the idea — and Prime Minister Benjamin Netanyahu has said there will be no hope for peace with a Palestinian government that includes Hamas. 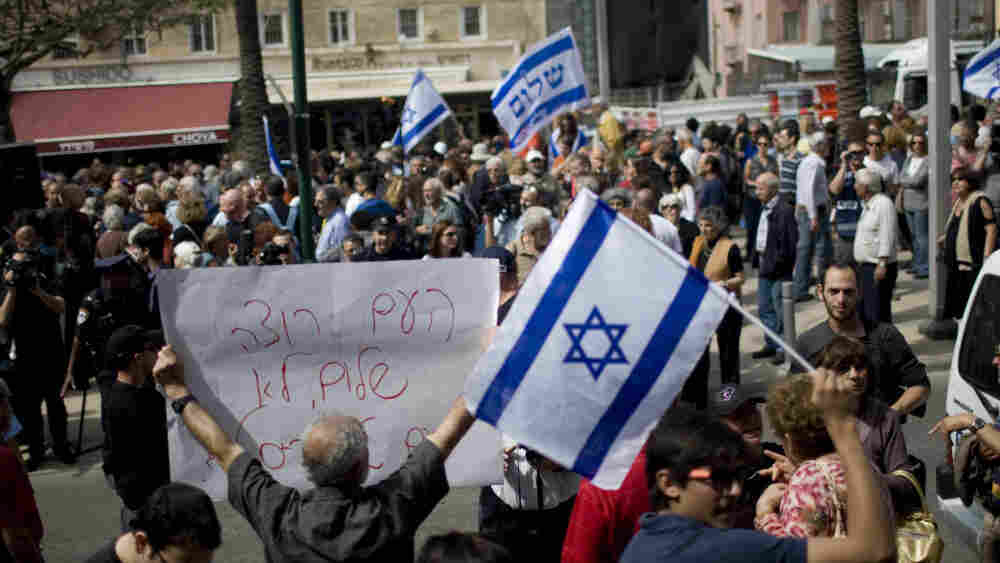 Israeli left- and right-wing activists demonstrate in Tel Aviv on April 21, when prominent leftist Israeli intellectuals signed a petition in favor of creating a Palestinian state based on 1967 borders. Ariel Schalit/AP hide caption 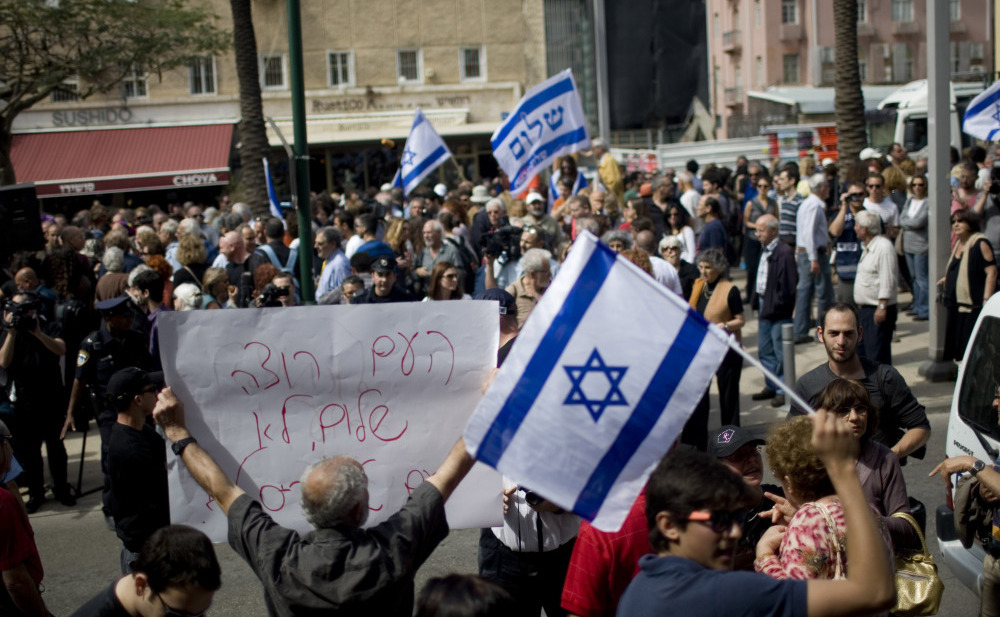 Israeli left- and right-wing activists demonstrate in Tel Aviv on April 21, when prominent leftist Israeli intellectuals signed a petition in favor of creating a Palestinian state based on 1967 borders.

There have been upheavals and challenges to the status quo across the Arab world — but not when it comes to the Palestinians, who have been in a stalemate in the peace process with Israel for months.

Palestinian leader Mahmoud Abbas is preparing to jump-start a push for statehood.

But some believe that initiative could be derailed by a new reconciliation accord between Abbas and the Islamist militants of Hamas, who remain strongly opposed to peace with Israel.

Pressure on the Palestinian Authority

An upscale coffee shop in Ramallah, the political and commercial capital of the occupied West Bank, is one of many new businesses that have sprung up here over the past couple of years. A huge injection of international aid also has helped build up the security forces, health care systems and other institutions — so much so that the European Union, the World Bank and other international organizations have concluded that the Palestinians are ready to run their own affairs.

This is key for Palestinian leaders, who will use it when they go before the United Nations General Assembly in September and ask for a resolution recognizing statehood. Ghassan Khatib, a Palestinian government spokesman, says the time is ripe to pass the resolution.

"The level of confidence by the international community on the Palestinians was never as it is now," Khatib says. "And we see continuous upgrading of the diplomatic representation of the Palestinian side in different European states. ... There are many indicators that the international community is seriously convinced that this is the time to realize the two-state solution." 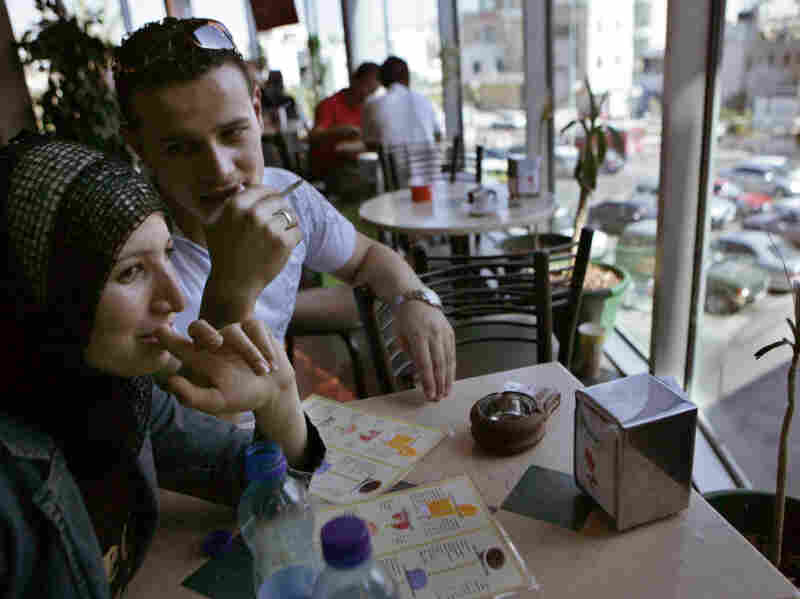 Nidaa Al-Barghothy (left) and her brother Mohammad Al-Barghothy sit at a coffee shop in Ramallah, the political and commercial capital of the West Bank, in 2007. Rachael Strecher/AP hide caption 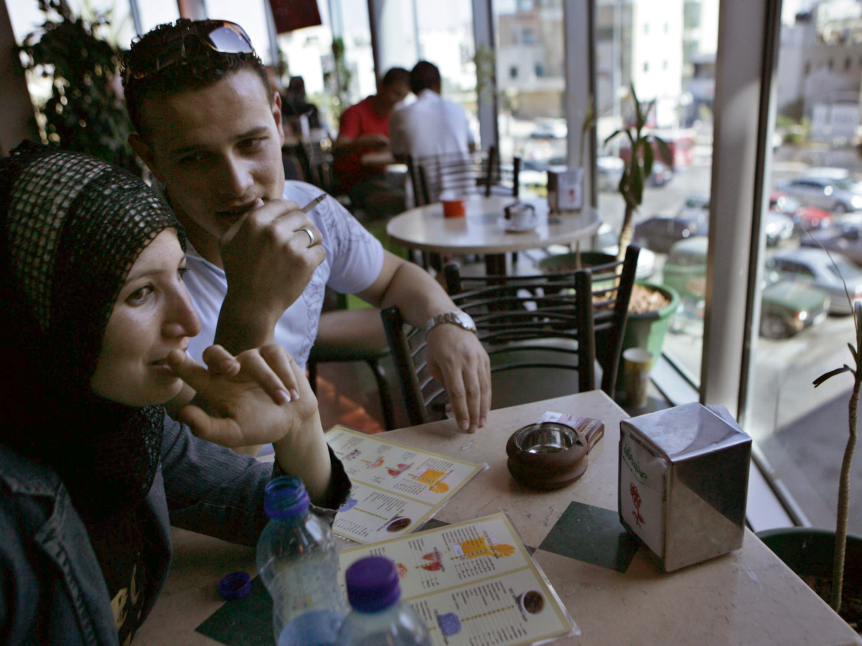 Nidaa Al-Barghothy (left) and her brother Mohammad Al-Barghothy sit at a coffee shop in Ramallah, the political and commercial capital of the West Bank, in 2007.

Recent developments in the Arab world have increased pressure on the Palestinian Authority to show some progress in the peace process, Khatib says, and that prompted the planned push at the U.N.

"This leadership, which has been associated with the bilateral negotiations that [have] been [a] [complete] failure, are required by the Palestinian public to do something or probably to step aside ... because the current situations are not sustainable," Khatib says.

To gain forward motion on a peace agreement, Khatib says, there is a growing consensus that a paradigm shift is needed from a bilateral approach to a multinational one.

The U.N. General Assembly admitted Israel into the world body in 1949. The idea that the Palestinians will seek similar recognition has unnerved many Israelis.

Last week, a peace demonstration in Tel Aviv turned ugly and loud. A small group of Israelis — mostly actors and intellectuals — had unveiled a petition in favor of a Palestinian state on the basis of the 1967 borders. Protesters shouted and swore at the group presenting the petition. There is a fear among many in Israel that the state will become further isolated if the Palestinians are recognized.

This leadership, which has been associated with the bilateral negotiations that [have] been [a] [complete] failure, are required by the Palestinian public to do something or to step aside.

Mark Regev, a spokesman for Israeli Prime Minister Benjamin Netanyahu, expresses concern that the Palestinians have taken a strategic decision not to negotiate but to instead to go around Israel to find a solution. He says he thinks the resolution will very likely be passed, but he doubts it will change anything on the ground.

"The question is, do they want more empty declarations, do they want more worthless pieces of paper, or do they really want Palestinian statehood? ... The way to achieve independence, statehood and sovereignty is by negotiating with Israel and achieving what we both believe in — a two-state solution," Regev says.

Regev says Netanyahu will address the Palestinian issue in a speech to the U.S. Congress next month, but Palestinian leaders are not expecting anything substantial or different from the Israeli leader. Obama also is expected to weigh in soon.

But now there is a new element likely to affect the calculations in both Jerusalem and Washington. In Cairo Wednesday, a deal was signed to create an interim unity government between Fatah, which dominates the Palestinian Authority, and its longtime rival, Hamas, the militant group that rules the Gaza Strip. Israel and the U.S. consider Hamas a terrorist organization. But Ahmed Yusuf, a former Hamas official, says the reconciliation between the two main Palestinian factions will add weight to their bid for statehood.

"When we have a ... unity government ... backed by both Fatah and Hamas, this is will help in September, when the Palestinians go to the General Assembly," Yusuf says.

But Netanyahu has already said there will be no hope for the peace process if there is a Palestinian government that includes Hamas.