Accessibility links
Michael Scott: So Long, Loser (We'll Really Miss You) Steve Carell's character shuffles awkwardly out the exit on NBC's The Office tonight. His long-suffering employees may not miss him, but critic Eric Deggans is really sad to see him go. 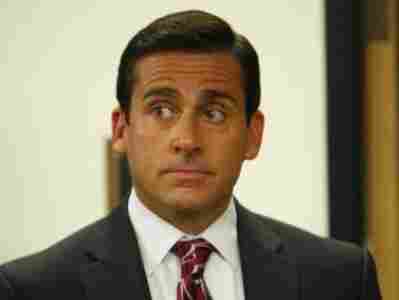 It takes a lot of smarts and talent to play the perfect doofus — which means Steve Carell just might be the most intelligent guy in Hollywood. Because his character Michael Scott is without a doubt the finest doofus currently appearing on network television.

But today's his last day of work. Michael Scott has insulted enough employees, embarrassed enough girlfriends and pulled his last inappropriate practical joke at the Dunder Mifflin paper company. Tonight, after a supersized 50-minute episode of The Office on NBC, he's going to clean out his desk and walk out the door.

Give Carell some credit. He's anchored NBC's hottest Thursday comedy far longer than any other star with a bankable movie career would have bothered. Along the way, Carell lent a sympathetic tone to the worst middle manager on network television. Sure, he'd aggressively and awkwardly force a colleague into a hug (and a kiss), but he was genuinely trying to show the guy he was welcome in the office. He just wanted to be friendly to a Seeing Eye dog; can he help it that he ended up insulting the blind woman holding the harness?

Of course, NBC's Office is a translation of an English TV hit, and Ricky Gervais' hapless David Brent was harsher in the original, a selfish bully who thinks he's more impressive than he is. Carell deliberately softened his character; Michael Scott is a goof with mostly good intentions who causes havoc almost by accident. The change gave the stateside Office a beating heart, making viewers root for its thickheaded hero.

Now, without Carell, fourth-place NBC faces a serious challenge. Who will be the next Office boss? This season will finish in a blaze of big-name glory, with cameo appearances from Jim Carrey, Will Ferrell, Ray Romano, Will Arnett and Gervais himself over the next few weeks. But somebody's got to take the job as Dunder Mifflin's lead doofus. And whether it's a big-name import like Carrey or an in-house promotion like Rainn Wilson's twisted salesman Dwight Schrute, the new guy — or gal — will forever change the direction of TV's smartest dumb comedy.

For now, it's time to bid farewell to Carell and Michael Scott, who is moving to Colorado to join his equally goofy fiancee. His anxiety, predictably, is making itself apparent in an odd way: He's been seriously considering keeping some salami in his pocket to feed all the bears who live in the Rockies. ("Especially if you think that life would be better without legs," counsels Schrute.)

Something tells me we'll all end up like his snickering subordinates — unable to appreciate what a beautiful loser we've lost until he's finally out the door.