Accessibility links
Across The South, Scenes Of Death And Devastation Firefighters searched through the remains of houses and neighborhoods pulverized by the nation's deadliest tornado outbreak in almost four decades. More than 280 people were killed across six states — more than two-thirds of them in Alabama.

Firefighters searched one splintered pile after another for survivors Thursday, combing the remains of houses and neighborhoods pulverized by the nation's deadliest tornado outbreak in almost four decades. More than 280 people were killed across six states — more than two-thirds of them in Alabama, where large cities bore the half-mile-wide scars the twisters left behind.

Alabama Gov. Robert Bentley said 2,000 National Guard troops had been activated and were helping to search devastated areas for people still missing. He said the National Weather Service and forecasters did a good job of alerting people, but there was only so much that could be done to deal with tornadoes a mile wide. As many as a million people there were without power.

Dave Imy, a meteorologist with the National Weather Service's Storm Prediction Center, said the number of deaths was the most in a tornado outbreak since 1974, when 315 people died. The center said it received 137 tornado reports around the region into Wednesday night.

Click on the map below to see images from the massive storm system and learn how a tornado is formed.

"It's going to take many days, perhaps even a couple of weeks, for the National Weather Service to sort out all the details," said the center's Rich Thompson.

Governors in Alabama, Mississippi and Georgia each issued emergency declarations for parts of their states.

President Obama said he had spoken with Alabama's governor and approved his request for emergency federal assistance.

"Our hearts go out to all those who have been affected by this devastation, and we commend the heroic efforts of those who have been working tirelessly to respond to this disaster," Obama said in a statement. He said he would travel to Alabama on Friday to view storm damage and meet with the governor and affected families.

The mayor of Birmingham, Ala., told NPR's Steve Inskeep on Thursday that the Pratt City area had been "totally devastated" and surrounding neighborhoods were heavily damaged.

"You're talking about whole neighborhoods of housing just completely gone. Churches, gone. Businesses, gone. I'm not talking about just roofs being blown off but just completely gone," Mayor William Bell said. "It's hard to imagine a heavily populated area that now seems like a bomb has been dropped on it. And just where buildings once stood, toothpick-size wood shreds are there now." 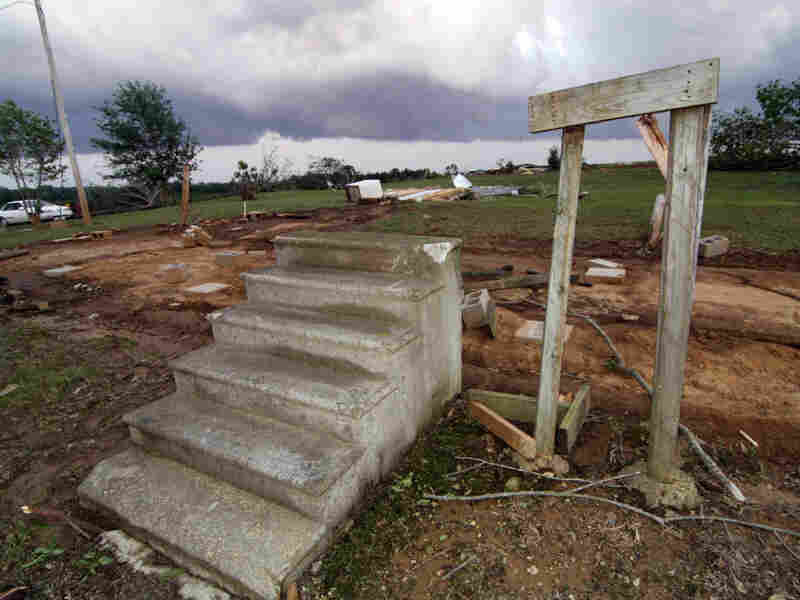 Concrete steps lead to the footprint of a mobile home scraped from the earth by a tornado that ripped across Preston, Miss., on Wednesday. Rogelio V. Solis/AP hide caption 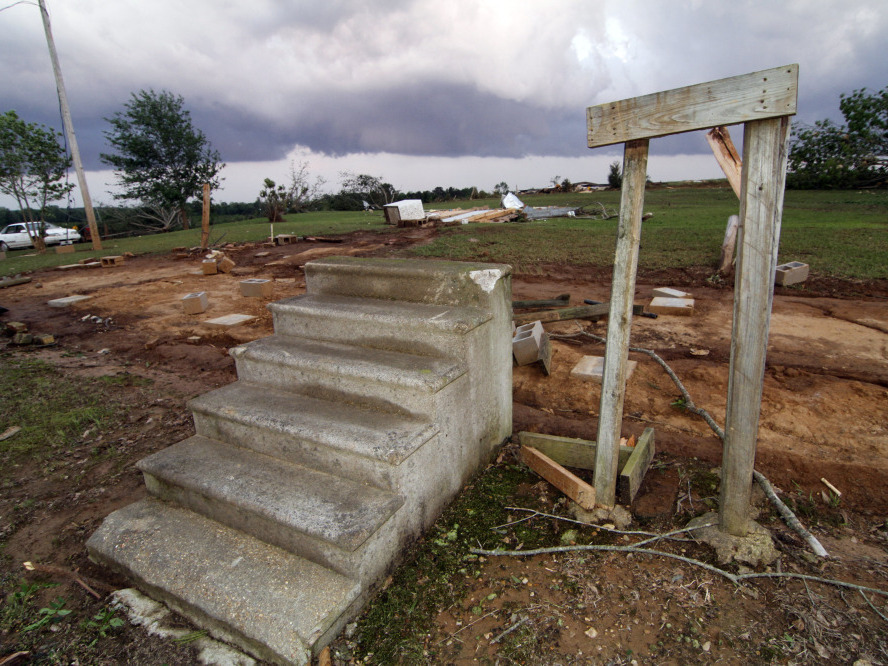 Concrete steps lead to the footprint of a mobile home scraped from the earth by a tornado that ripped across Preston, Miss., on Wednesday.

He said the municipal auditorium is serving as a temporary shelter.

"We've been talking to local ministers about opening up their churches and assisting us in getting clothing and supplies to families who now have nothing," Bell said, "and that's going to be a tremendous task over the next several weeks, if not several months."

The bad weather was not a total surprise in Alabama; some schools had canceled classes, government offices closed early, and newspapers warned of the possibility of severe storms. Still, the ferocity of what showed up was shocking.

"It looks like Iraq or Sudan, you know? That's just how bad it is," said former state Rep. John Hilliard as he walked around the Smithfield Estates neighborhood of Birmingham.

Some of the worst damage was in Tuscaloosa, a city of more than 83,000 that is home to the University of Alabama. Neighborhoods there were leveled by a massive tornado, caught on video by multiple sources, that barreled through Wednesday, right around the 5 p.m. rush hour.

Back from an aerial tour Thursday, Tuscaloosa Mayor Walter Maddox said the tornado tore a streak as many as 4 miles long and a half-mile wide of "utter destruction." At least 36 people were dead in the city's police jurisdiction, and searches continued for the missing.

"We have neighborhoods that have been basically removed from the map," he said.

He said the majority of the city's garbage and recycling trucks were either damaged or destroyed, too, which would severely complicate clean-up efforts.

University officials said there didn't appear to be significant damage on campus, and dozens of students and locals were staying at a 125-bed shelter in the campus recreation center.

In one area off Interstate 359, a gas station and convenience store that got hit opened anyway Thursday. A tornado had ripped off part of the roof and flipped over a gas pump.

"Watching it just suck everything up as it was coming across — it made your whole body hurt, because you knew it was just tragic," assistant manager Christine Kenyon said. "You knew everything in its path was going to be wiped out."

Kenyon, three other employees and three customers took cover in a bathroom — advice Kenyon said she remembered hearing from forecasters who warned about the treacherous conditions that brought the highest number of casualties to Alabama in decades and was the worst in the U.S. since the 1950s.

At the city's main hospital, DCH, dozens of patients lined the corridors waiting for treatment. As many as 2,000 doctors and nurses were working on the wounded at the hospital, which had to operate on backup power. "We do a lot to prepare. But I don't know how you prepare for anything of this magnitude," chief nurse Patrice Jones said.

As quickly as doctors treated the injured, waves of new patients flooded in. "We've had so many folks and clearing them out, and then they have no place to get home to and no way to get there if they did," DCH spokesman Brad Fisher said.

'An Awful Experience' In Pleasant Grove

In the Birmingham suburb of Pleasant Grove, the storm slammed heavy pickup trucks into ditches and obliterated tidy brick houses, leaving behind a mess of mattresses, electronics and children's toys scattered across a grassy plain where dozens used to live.

Lynn Crawley, who grew up in Pleasant Grove, said she heard the storm coming and ran next-door to her mother's house. The tornado obliterated the roof and walls. Only the hallway was left standing — the hallway she and her mother were huddling in.

"It finally got quiet and ... [we were] able to move and able to kind of pull ourselves out from under it," Crawley said. "The roof was gone. Everything was like, wow. It was raining. It was an awful experience."

The violent weather system spread destruction from Texas to New York, where dozens of roads were flooded or washed out. It came on the heels of another system that killed 10 people in Arkansas and one in Mississippi earlier this week, and caused widespread flooding in Missouri and the Ohio River Valley.

Greg Carbin, a meteorologist at the National Oceanic and Atmospheric Administration's Storm Prediction Center, told NPR's Michele Norris that the forecasters he worked with Wednesday were glued to the radar and astonished at what they were seeing.

"It was one event that I have not experienced before in 25 years of forecasting," he said, "and it was quite stunning."

Carbin said April 2011 would likely go down in the record books with the most tornadoes.

"We're carrying about 600 for the month, which is an unheard of figure," he said. A normal April over the past 10 years, he said, would experience between 160 and 180 tornadoes.