Accessibility links
Wedding Frenzy A True Sensation, Or Royally Nuts? An estimated 2 billion people may crowd TV screens worldwide tomorrow to watch the royal wedding in England. But as the deluge of matrimonial coverage grows, TV critic Eric Deggans suspects the world's media may be fooling themselves, and their audiences, with the hype. 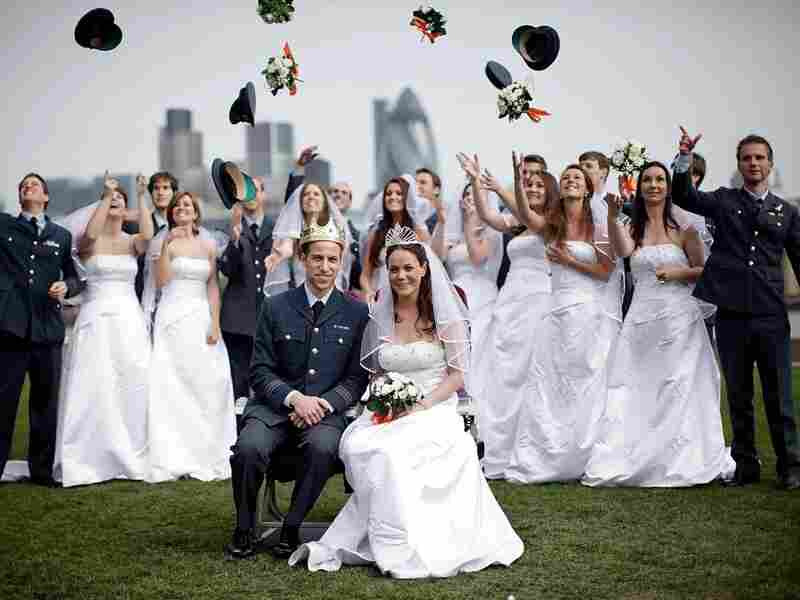 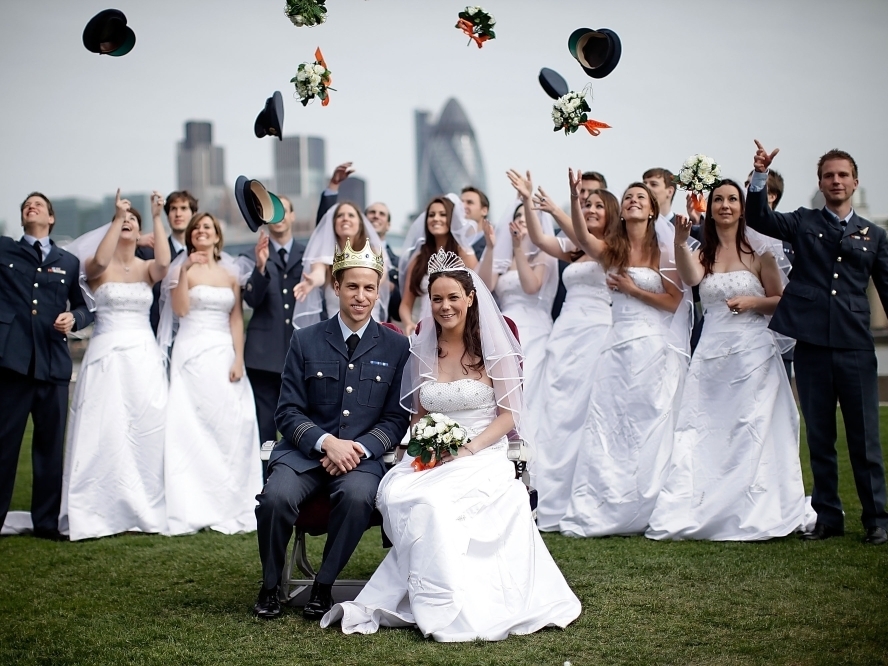 Contestants take part in a Prince William and Kate Middleton lookalike competition in London. The British government is predicting a TV audience of 2 billion people for tomorrow's ceremony.

If you turn on a television during any newscast, especially in the mornings, you are probably already drowning in it: media coverage of Friday's royal wedding.

But this cynical critic must ask: Is this a genuine response to what viewers want, or a moment manufactured by an industry desperate for a blockbuster event?

You've already seen the morning show anchors in England, reporting — and we use this term loosely — on everything from Americans flying in for the nuptials to bride Kate Middleton's shopping trips.

In today's modern media ecology that's just the tip of the Twitter feed. YouTube and the royals' own Web page will stream the wedding live (there's also an official Twitter page). A comic book about the royal couple came out Wednesday. E! entertainment channel is asking fans to RSVP for a live stream of the channel's coverage, posted on their Facebook walls. And TV Guide will feature comic Kathy Griffin's vaguely explicit punchlines, to sum it all up tomorrow evening.

Of course, there also is an app for that, with dozens of programs for Apple or Android devices developed around the nuptials. You can sift through coverage on the BBC, ABC and NBC, or slap one of 40 outfits on anyone in the wedding party. (Trust me: Prince Charles looks absolutely breathtaking in the white lace gown.)

At stake, say the people creating all this media, is a possible audience nearly twice the size of the 750 million who watched Prince William's parents tie the knot in 1981.

In America, the data are more divided. A recent New York Times/CBS News poll said just 6 percent of us are following the wedding. But among women over age 40, that number jumped to 40 percent.

What this may say most about us Yanks is that we savor our contradictions. We have a 200-plus-year tradition of resisting monarchies and the sense of inborn entitlement they represent. Yet, we secretly dream of royal-level luxury and prestige, happy to watch it on display in a country where we're not footing the bill.

We are marrying at lower rates, but we love the pomp and circumstance of a big wedding. And this surprisingly normal young couple may be our last hope of finding British royals Americans love as much as William's mother, Diana.

Put simply, in a media age saturated with contrived reality TV shows pushing fake drama, we now have a genuine storybook wedding. A soap opera come to life, minus the liquor-fueled catfights.

Helping matters is the wedding's schedule, timed perfectly for American media. With much of the media establishment on East Coast time, the procession and wedding will occur from 5 a.m. to 7 a.m., when the female news audience is highest.

If the ceremony ends on time, the broadcast and cable news networks can spend the first two hours of their morning newscasts dissecting it all. It is precisely scheduled, highly anticipated and infinitely discussable — prime conditions for morning newscast overload.

So even though evidence suggests there may be more of us who prefer to see reports from Libya or just sleep in, we will endure this brief hijacking of the world's news cycle.

Even the most sensible of news diets deserves a little wedding cake for dessert, from time to time.