Accessibility links
Bullwinkle DVD: Take A Trip In The Wayback Machine For the first time, the complete adventures of Rocky and Bullwinkle and Friends are available on DVD. TV critic David Bianculli says even 50 years later, the humor in the original episodes still "hits it out of the park." 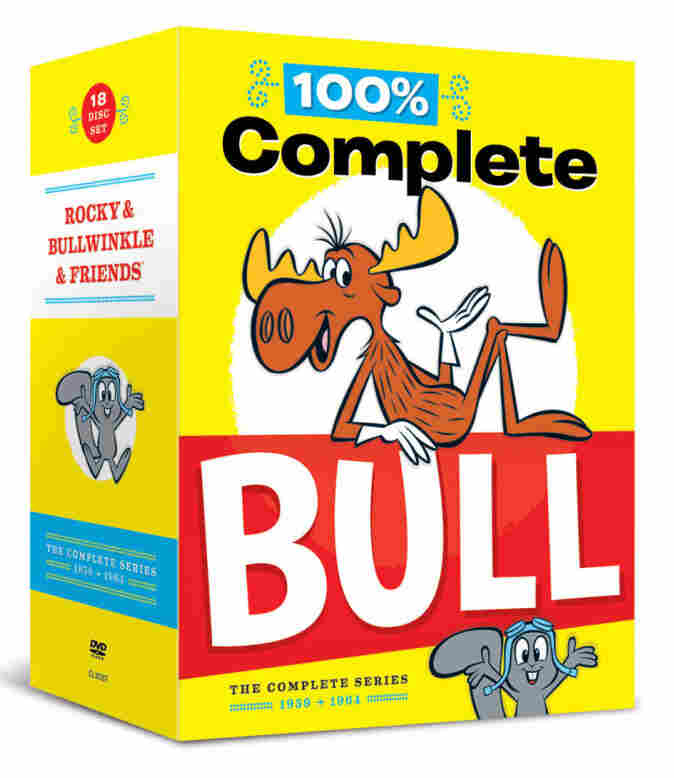 A recent DVD boxed set from Classic Media presents, for the first time, the complete adventures of Rocky & Bullwinkle and Friends — hundreds of installments of Rocky the Flying Squirrel and Bullwinkle the Moose, as well as Fractured Fairy Tales, Dudley Do-Right and Mr. Peabody, the genius dog with a pet boy named Sherman. These prime-time TV cartoons go back about 50 years — and TV critic David Bianculli says that while watching them all over again, so did he.

The TV cartoon series that most people refer to as Rocky & Bullwinkle actually was two shows, with two different titles, shown on two different networks. Rocky & His Friends came first, in 1959 — and when ABC canceled that series after two years, NBC picked up the ball, the very next night, to present The Bullwinkle Show, which ran from 1961 to 1964. Both shows were co-created by Jay Ward and Bill Scott, and both were aimed at adults as much as children. Back then, I thought these shows were just about the best television ever made. Half a century later, after conning my way into watching TV for a living, I still do.

I had just turned 6 when Rocky & His Friends premiered, and the show arrived on TV like a birthday present meant just for me. It was the first TV show I remember staying up late to watch, waiting eagerly for each new installment to arrive.

Through the years, each 30-minute program had different ingredients, but the same basic format. A serialized adventure of Rocky and Bullwinkle would open and close each show. In between would be other features — just as warped, and just as funny. During the first season, for example, Bullwinkle would recite poetry, or offer little-known facts as Mr. Know-It-All. And Mr. Peabody, the time-traveling talking dog, would set his Wayback Machine, and he and his pet boy, Sherman, would visit famous moments in history.

But my favorite was Fractured Fairy Tales. These short cartoons were narrated by Edward Everett Horton, who had the most soothing TV voice this side of Fred Rogers. He told — or retold — familiar fairy tales, but with wickedly modern spins.

In later years, Fractured Fairy Tales would give way to other features, like Dudley Do-Right of the Mounties. But Rocky and Bullwinkle remained constant, with their adventures pitting them against Cold War spies Boris and Natasha. I was well into my 20s when I finally put it together that Boris Badenov was a play on an opera called Boris Godunov. But some jokes I got right away — and they still make me laugh. Like the episode where Rocky and Bullwinkle take a wheelbarrow full of box tops, which kids used to save to send in for prizes, and try to deposit them at their local bank.

"No, I really mean it," says Bullwinkle.

Clearly, this is where my love of puns and bad jokes comes from — and my love of satire. And I know I'm not alone. Matt Groening told me once that if not for MAD Magazine and Rocky & Bullwinkle, he probably never would have had his sense of humor, or love of cartoons — and all he did was go off and create The Simpson,s the longest-running animated series in TV history.

But Rocky & Bullwinkle was there first, entertaining us all, and influencing a lot of us. It's a delight to have the entire series in one set, to relive the early days. The animation, especially on the ABC series, is pretty crude — but the humor, time and again, hits it out of the park.