Accessibility links
At The Royal Wedding, Choreography Is Everything It's finally actually time for the royal wedding, after all the talk and the runup. And now, you'll get to see what is likely to be a very carefully planned event, where even the movements of little children are scheduled to the minute. 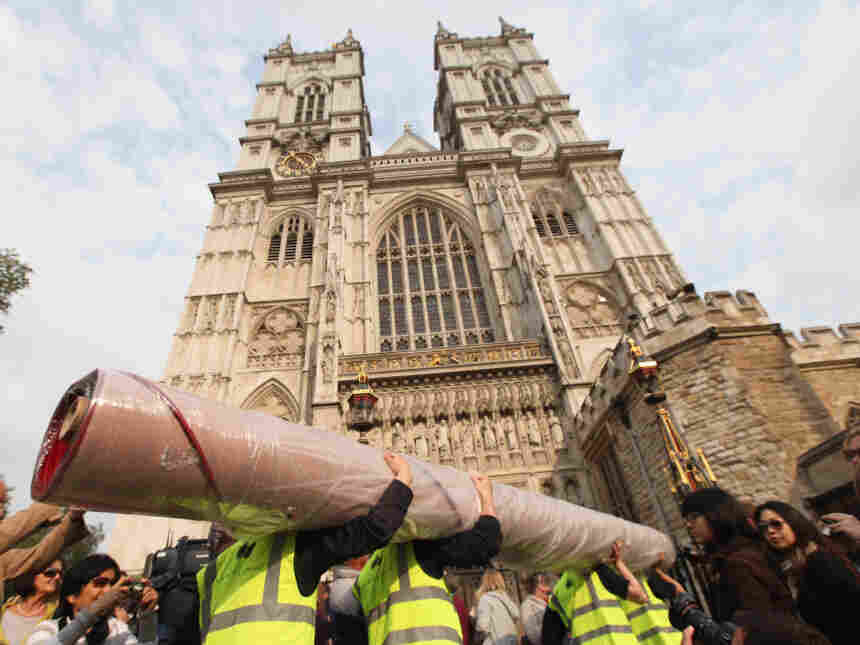 Workers carry in sections of the red carpet at Westminster Abbey where Prince William and Kate Middleton are scheduled to get married tomorrow. Sean Gallup/Getty Images hide caption 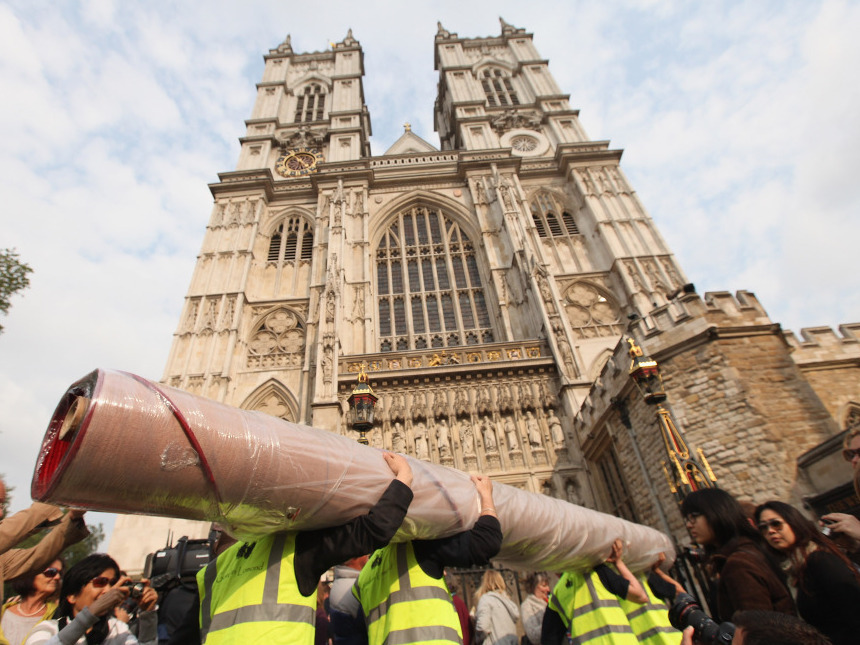 Workers carry in sections of the red carpet at Westminster Abbey where Prince William and Kate Middleton are scheduled to get married tomorrow.

We have almost reached the point where the only thing left to do with regard to the wedding of Prince William and Kate Middleton is to actually ... you know, have it.

We've seen the reporters standing outside Buckingham Palace, we've seen the seating chart, we've seen the flags and the commemorative plates and the coffee mugs, and now, they have to actually conduct the thing. It's easy to forget that this fooferaw actually involves two human beings getting married, but it does.

There are still things we don't know, of course, including a couple of potentially big surprises. Kate's dress is the most discussed matter that remains outstanding, and it's impressive that they've managed to keep that one a secret as long as they have. Of course, much of the suspense on the ground involves a more prosaic concern: whether it's going to pour down rain on all the silly hats and cheery flags along the route the couple will follow.

But in the end, much of what the people who watch this wedding will watch it for is its obedience to expectations. This isn't the kind of event you watch in order to be surprised, the way you watch Olympic skiing to see whether anyone falls. This is an event that is meticulously plotted, from every horse to every soldier to every person leaving every royal location for every other royal location.

And the people who are into it wouldn't have it any other way.

If you've ever tried to get, say, a group of five friends to arrive at a bar within a half-hour of when everyone is supposed to get there, it's hard not to admire the sheer wire-walking bravery of an operation that schedules a kiss for 1:25 p.m.

You think that sounds exact? The Prince of Wales and the Duchess of Cornwall — that's Charles and Camilla to you — leave for Westminster Abbey at 10:38 a.m., and that's part of the official timetable. They're not afraid to let you know that if they leave Clarence House at 10:39 a.m., something has not gone according to plan. Funnier still, the bridesmaids and pages — who are small children, for the most part — leave at 10:48. You give most people a gaggle of kids to move to a formal event, and they'll be lucky to estimate within three
days when everyone will manage to get their shoes on.

If you think of public events as dances, this is not some crazy boogie where you throw your hips into it and hope for the best. This is ballroom. This is a waltz. There are toes not to be stepped on, there are spots on the floor to be hit, and there are precise ways that dresses are meant to swirl at particular moments in particular directions.

Or, if you prefer, it's like a wedding put on by a drill team.

This isn't a wedding that's going to erupt in YouTube-style dancing — they won't do "Thriller" at this particular reception. But that doesn't mean it isn't all about the choreography.