Accessibility links
Movie Review - 'Earthwork' - On An Urban Canvas, An Artist Finds His Eden Based on a true story about a Kansas artist's attempt to landscape an art-work into a plot of prime Manhattan real estate, Chris Ordal's film has some charming homespun qualities — and a few too-obvious narrative tricks.

'Earthwork': On An Urban Canvas, An Artist's Eden

'Earthwork': On An Urban Canvas, An Artist's Eden 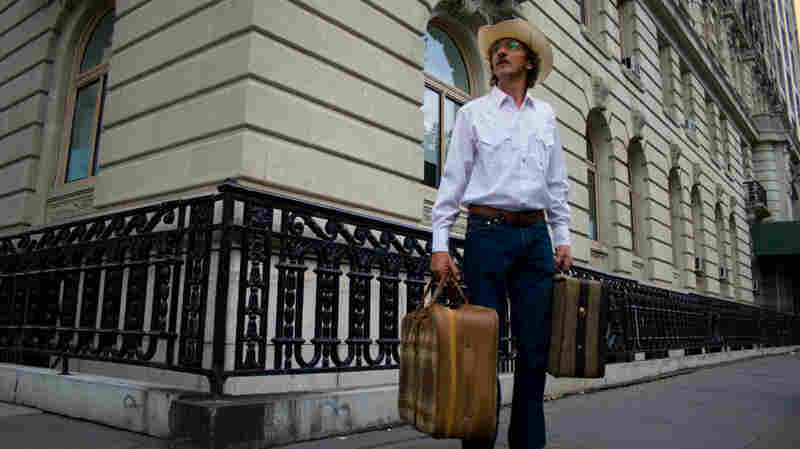 'Just Level With Me'

'Just Level With Me'

'Cut A Hole, Stole Its Soul'

'Cut A Hole, Stole Its Soul'

With bigger canvases come bigger artistic challenges; at least that's the case when the canvas can be measured in acres instead of inches or feet.

Stan Herd is a crop artist, a man who carves pictures out of the earth using soil, lumber, flowers and vegetables as his paint, in works so large they can only be properly seen from high above. That's a lot of effort and expense for art that can't get to a gallery, and that's seen by precious few people before being plowed under.

Chris Ordal's modest, sweet-hearted biopic concentrates on Herd's mid-'90s attempt to making a paying job out of an artistic impulse that threatens to bankrupt his family. After years of trying to sell aerial photographs of his work at open-air markets near his Kansas home, Herd (John Hawkes) sees an opportunity in a plot of prime Manhattan real estate where Donald Trump plans to build a skyscraper. Until the bulldozers start their work, Trump's company plans to allow an artist to create a temporary installation on the land.

Pete Kaplan (Bruce MacVittie) is an aerial photographer and Herd's biggest supporter, and has been telling him for years that he needs to find a way to get his work in front of more people if he wants his big break. Herd follows the advice and gets the commission for the project by telling Trump's representatives that he'll create the work with his own funds. The "Trump Money" he tells his wife is paying for the work — and funding her return to medical school — is actually from the mortgage he took out on their house without telling her.

Ordal's direction of the film has a charming homespun quality that Hawkes, Oscar-nominated for last year's Winter's Bone, supports with an unaffected performance as deeply grounded as Herd's artwork. Cinematographer B. Francis Cole uses shallow depths of field and some lovely nature photography to highlight small corners of natural beauty within Herd's massive artworks, details that might not be visible from a distance.

Unfortunately, Ordal's storytelling isn't as graceful as his technique. Two tragedies kick off Act 3 — one personal, one financial. The first comes out of nowhere and never really finds its place in the narrative. Meanwhile, the second has been telegraphed for so long, in pointed reminders of how close Herd constantly is to one particular disaster, that it's a relief to finally have that particular axe fall. 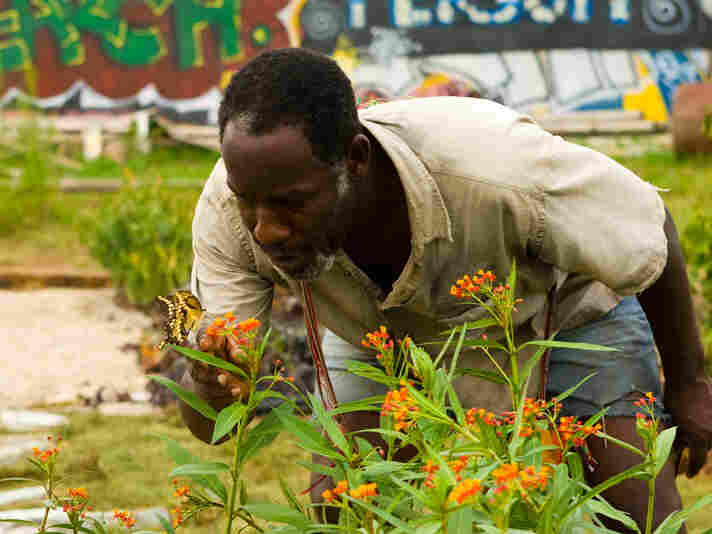 Herd struggles with his project's scope and costs, until he meets Lone Wolf (James McDaniel) and other homeless locals who gradually get involved with the project. Shadow Distribution hide caption 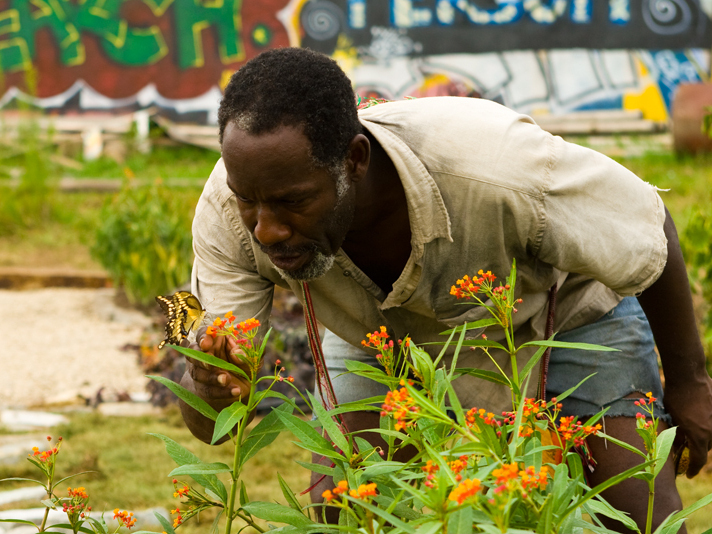 Herd struggles with his project's scope and costs, until he meets Lone Wolf (James McDaniel) and other homeless locals who gradually get involved with the project.

Herd's stranger-in-a-strange-land status is also hugely overplayed, both in his characterization (Crocodile Dundee may have had an easier time fitting into Manhattan), and in the broad stereotypes that inform the film's New Yorkers. These tend to fall into well-worn categories, whether it's the haughty glares at Herd's lack of style, the well-meaning but clueless limousine-liberal art appreciators, or the dark-rimmed glasses and air of erudite condescension evident in the New Yorker writer who interviews him.

The folks who do accept Herd, reluctantly at first, are the homeless men who inhabit the tunnel that opens out onto Trump's plot of land. They're a quirky bunch (bordering on self-consciously so) who regard Herd with curiosity and some trepidation before throwing themselves into his work with enthusiasm.

Ordal manages some of his best writing as he develops the bond between Herd and a young graffiti artist (Chris Bachand), forged in the ephemeral and under-appreciated nature of both of their mediums. But these fleeting moments never quite overcome the sense that Earthwork's narrative follows too-familiar templates, and that its characters lack the careful detail of Herd's own art.