Accessibility links
One Big Obstacle To Japan's Recovery: Trash The March earthquake and tsunami in Japan made junkyards of entire cities and created the equivalent of 16 years' worth of waste. With both the national and local governments struggling to handle cleanup, corps of volunteers in places like the seaside city of Kesennuma are starting to tackle the daunting task on their own. 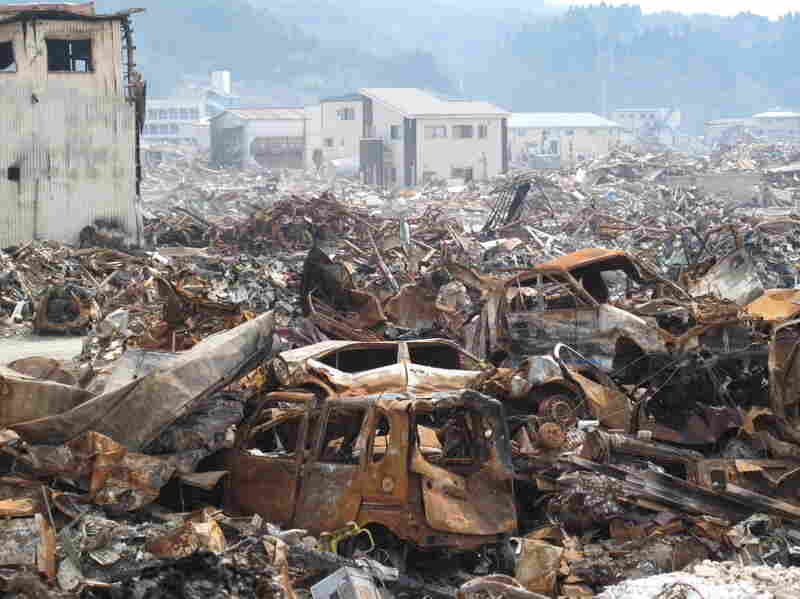 In Kesennuma, garbage covers much of the city, particularly in the harbor. Some baseball fields and parks nearby have been converted into areas where cranes can sort through the debris. Yuki Noguchi/NPR hide caption 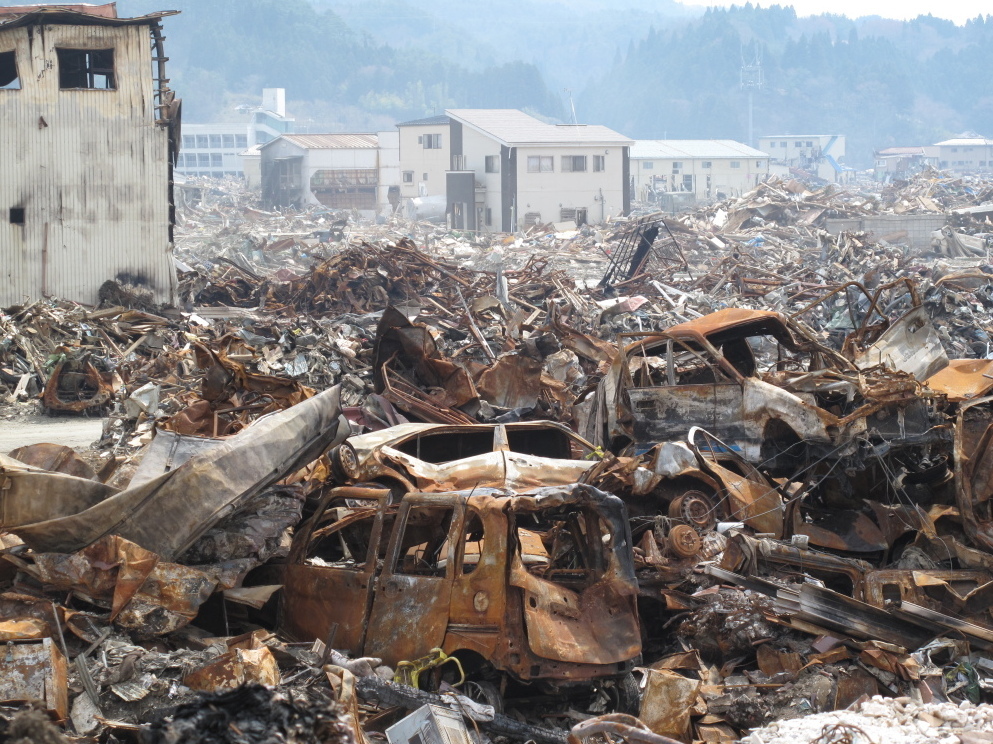 In Kesennuma, garbage covers much of the city, particularly in the harbor. Some baseball fields and parks nearby have been converted into areas where cranes can sort through the debris.

Last month's earthquake and tsunami have left Japan with a massive trash problem. In many parts of the country's affected coastline, there's literally nothing left but mud and debris.

On the outskirts of the seaside city of Kesennuma, what was once a baseball field and park has been turned into at least two football fields' worth of garbage, piled 15 feet high. Bulldozers are going through it all. There are aluminum siding, school desks, bits of carpet. The stench can be detected from blocks away — it smells a little bit like rotting fish.

This is but a tiny fraction of Japan's tsunami-related debris. The disasters made junkyards of entire cities and created the equivalent of 16 years' worth of waste.

There is, of course, a need to rebuild critical infrastructure in the nation. But Kazuyuki Akaishi — an expert at the Japan Research Institute consultancy — says trash is the next big obstacle to recovery.

It isn't just the volume, which he estimates will total 100 million tons. The debris is heavy with seawater. It also contains an unknown amount of asbestos and radioactive waste — materials that could be dangerous, complicated and, therefore, more costly to clean up.

And then there's the issue of geography. The hard-hit northeast of Japan is mostly mountains and coastline, with little flat land in between to sort and stow trash. Japan also has almost no landfill space left. So, what it can't recycle or burn, it may have to ship overseas.

Taking Matters Into Their Own Hands

Last week, the Japanese Cabinet approved some emergency spending for cleanup. But it's not providing specific plans. The Ministry of Environment declined an interview for this story.

Local governments, meanwhile, are coordinating cleanup. But they're still reeling from the tsunami that wiped out some of their offices and killed many of their workers.

So in the meantime, many residents are taking matters into their own hands.

Takuya Murakami and a handful of others, for example, are running a grass-roots volunteer operation out of a pachinko parlor parking lot in Kesennuma. In addition to making soup and delivering supplies to evacuees, he says they've also been clearing their neighborhood roads.

"It was supposed to be cleared, but a month passed and we were totally ignored," he says. "So we decided it would probably just be faster if we did it ourselves."

Volunteers have also started a fire in a rusted oil drum and continue to feed it with cardboard pieces and bits of broken lumber, hoping to burn away some of the problem.

Michinori Watanabe is this volunteer corps' ringleader. Pointing to where he's standing, he says that very spot had, until recently, been a mountain of trash — people couldn't even move their cars.

"If you really want to help us," he says. "Take a piece of trash home with you."