Accessibility links
Iran Suddenly Turns Silent As Protests Spread In Syria Iran's government supported the protests in Bahrain, Yemen and Egypt, but it fears losing an ally if Syrian President Bashar Assad falls. Among other benefits, the Syrian connection is crucial for Iran's relationship with Hezbollah in Lebanon.

Iran's government celebrated the popular uprisings first in Tunisia, then in Egypt, Bahrain and Yemen. But when protests began in Syria, Iran turned uneasy and uncertain.

Syria is one of Iran's few real allies in the Arab Middle East, and Tehran has carefully cultivated a relationship with the ruling Assad family for more than 30 years. 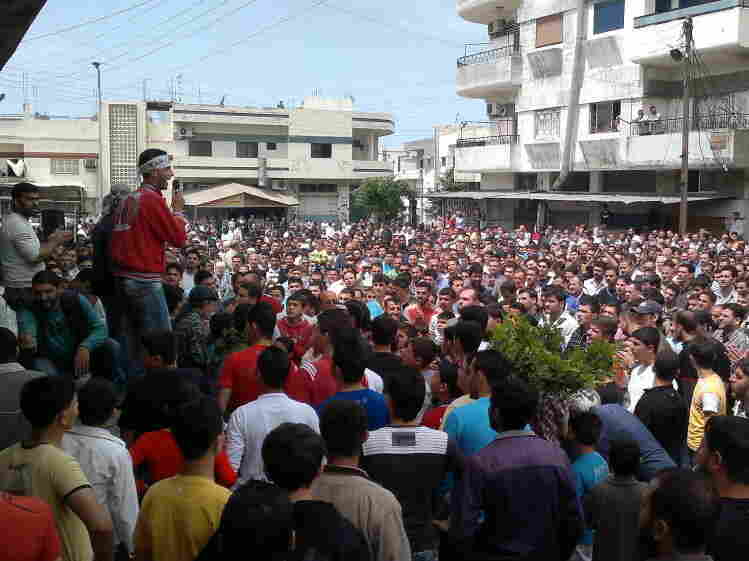 Syrian anti-government protesters demonstrate in Banias on April 29, the "Day of Rage" called by activists to pile pressure on President Bashar Assad as his regime enacted a violent crackdown on dissent. AFP/Getty Images hide caption 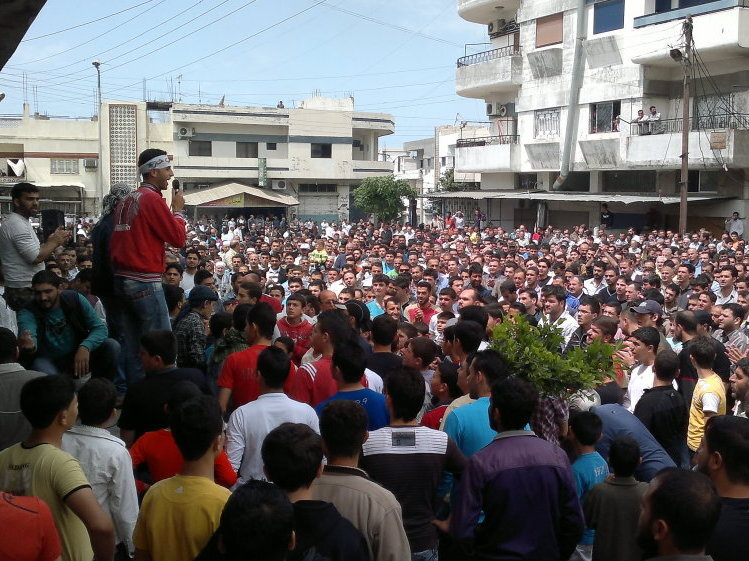 Syrian anti-government protesters demonstrate in Banias on April 29, the "Day of Rage" called by activists to pile pressure on President Bashar Assad as his regime enacted a violent crackdown on dissent.

If Syria's President Bashar Assad falls, Iran can no longer count on Syria. And among other benefits, the Syrian connection is crucial for Iran's relationship with Hezbollah in Lebanon.

Bruce Riedel, a Middle East analyst at the Brookings Institution's Saban Center, notes that for Iran, it is no longer a simple matter of praising the people in the streets and condemning their rulers.

"If the Syrian government is toppled, in a revolution like Egypt's or Tunisia's, Iran will be the big loser, and the Iranian intelligence services will have lost a key ally in their ability to project power in the Middle East," Riedel says.

Iran's news media have gone quiet on Syria, leaving Iranians to rely on satellite TV for coverage of the protests there. As the demonstrations in Syria have spread and hundreds of people have been shot, Iran's leaders have said next to nothing.

Haleh Esfandiari, the director of the Wilson International Center's Middle East program in Washington, says the Iranian leaders are at a loss — they simply cannot take up the cause of the Syrian protesters as they did with earlier Arab demonstrations.

"The best excuse is to blame it not on the grievances of the population but say that these are foreign-instigated uprisings by the Israelis and the Americans," Esfandiari says.

Iran's President Mahmoud Ahmadinejad did just that in a speech a few days ago. He said that the enemy's conspiracy is to spur war between the nations and create Iranian-Arab and Shiite-Sunni tension. All of this is plotted by the United States and its allies, he said.

If the Syrian government is toppled ... Iran will be the big loser, and the Iranian intelligence services will have lost a key ally in their ability to project power in the Middle East.

For its part, the U.S. has accused Iran of helping Syria put down the demonstrations and of providing it with technology and training that proved effective in quelling Iran's own street protests after the disputed presidential election in 2009.

Susan Rice, the U.S. ambassador to the United Nations, repeated that charge earlier this week.

"President Assad is disingenuously blaming outsiders while at the same time seeking Iranian assistance in repressing Syria's citizens through the same brutal tactics that have been used by the Iranian regime," she said.

Fear Of A Lost Connection With Hezbollah

Reuel Marc Gerecht, a former CIA agent and now a Middle East specialist at the Foundation for Defense of Democracies, says it makes perfect sense that the Iranians would be helping the Syrian government.

The Iranians fear they will lose access and influence in Lebanon if Assad loses his grip on power in Damascus, he says.

Hezbollah would lose its primary supply line for weapons — especially missiles. The Lebanon-based group received thousands of missiles from Iran, which it used against Israel in 2006.

"Without the Syrian pipeline, then the Hezbollah — if they could have another war with Israel — will run out of weaponry. And they need to have that land route," Gerecht says.

The situation in Syria is putting great stress on the Iranian leadership. And it's not a good time for Iran's intelligence services. A very public fight has broken out over the fate of Iran's intelligence minister, Heydar Moslehi. Ahmadinejad has tried to fire him; Supreme Leader Ali Khamenei wants him to remain in place.

Riedel, the Middle East analyst at Brookings, says that no matter who their leader is, Iran's intelligence services didn't see the Syria trouble coming.

"The questions will be asked: 'Who lost Syria?' And the Iranian intelligence service will probably be blamed," Riedel says.

Blamed for not seeing it, but perhaps more seriously, blamed for leaving Tehran even more isolated in the Middle East than it has been in the past.