Accessibility links
The Royal Wedding: A Crowd's-Eye View The commoners of London stood shoulder to shoulder like flag-waving, wedding-watching sardines with hats for the chance to see Prince William marry Kate Middleton at Westminster Abbey. NPR's Linda Holmes takes in the day's ceremony and spectacle.

The Royal Wedding: A Crowd's-Eye View

The Royal Wedding: A Crowd's-Eye View 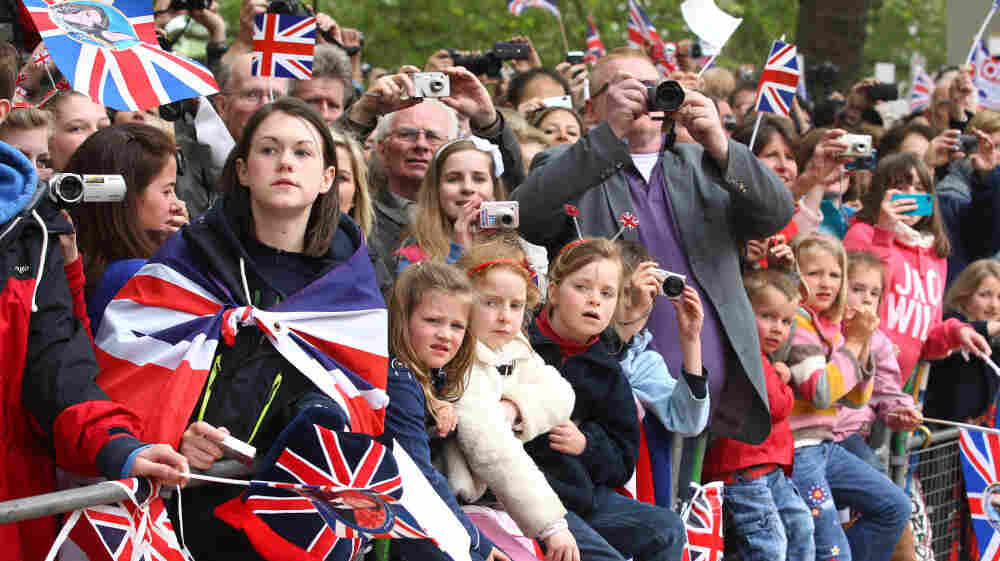 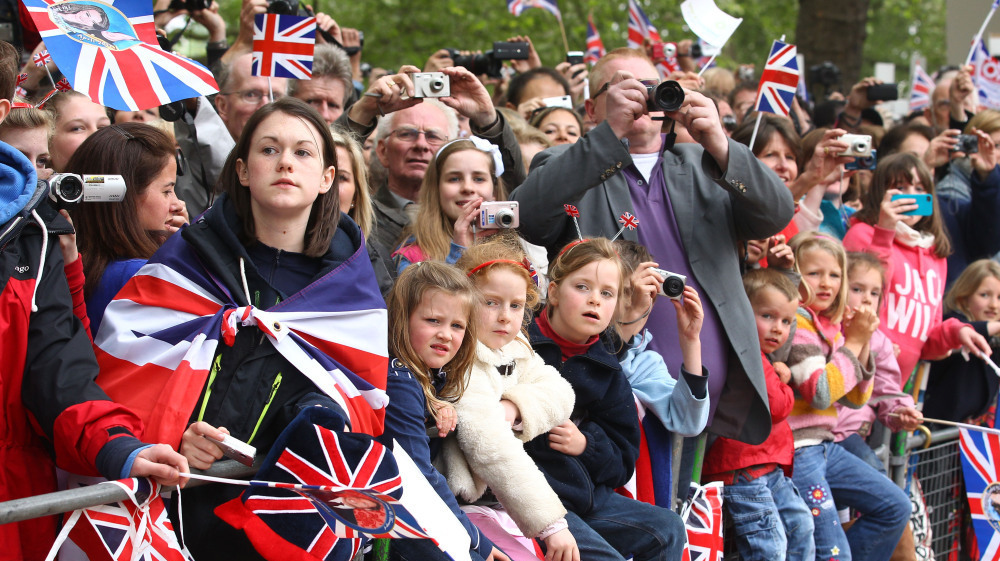 Well wishers with flags and cameras after the Royal Wedding of Prince William to Catherine Middleton at Westminster Abbey.

I watched the royal wedding processional from behind a woman with a sequined Union Jack cocktail dress, flag-themed sunglasses, high-heeled boots, a flag she wore like a cape, and a plastic cup that she kept clarifying she was filling with vodka schnapps, not vodka.

Incidentally, I highly recommend watching every highly anticipated international event in the company of someone who merrily promises that she is not an alcoholic.

This was the royal wedding as the commoners of London got to see it, live and in person. I stood along Whitehall, only a couple of blocks away from Westminster Abbey, where just the day before, everything had looked quite normal.

Today, at 7:00 in the morning London time, Whitehall was surprisingly quiet, with only one layer of people already waiting against the barricades, so there were still good spots to be had. Perhaps to be right up front you had to camp out overnight, but getting up early in the morning was enough to get a great view of the processional.

Early mumblings were that this wasn't a crowd like the ones London produces for some events, but over the course of the next five and a half hours, the sidewalk filled and filled and ultimately overfilled, until we were packed in like so many flag-waving, wedding-watching sardines. Sardines with hats, of course.

In the early morning hours, the gathering crowd was so bored that they cheered for absolutely everything – a couple of oddballs in costumes, a street cleaning crew who seemed to suspect they were being mocked, and particularly a man on a bicycle who kept pedaling up and down the street doing his best royal wave. The crowd gave Bicycle Man an A-plus.

Most of all, though, they cheered every newly arrived clump of police who ambled down the street. We learned from chatting with the bobby who stood right in front of us that he and his crew had been bused in from west of London and had gotten up at 3:00 in the morning to get there at 8:00. He didn't seem annoyed, but he didn't necessarily seem to consider it the greatest honor he'd ever known, either. "They bus us in, give us a meal, then they tell us to stand here for five hours and not go to the loo," he said with good-humored resignation. The police in general were friendly and a little bored, and if you asked nicely, they'd take a picture of you and your friends.

Around me, other than the woman with the plastic cup, there were several very kind gray-haired ladies, one of whom kept gently asking her husband to stop fidgeting, while acknowledging that she knew he wasn't the least bit interested in anything that was going on. They handed around cherry tomatoes and Pringles, and they were curious about where I came from.

Not that I was the only representative of the press around. Oh, no, not by a long shot. At one point, Ms. Vodka Schnapps went off in search of a restroom and came back to tell us that she'd been interviewed three times (it's the eye-catching outfit), including one interview she said she gave to "two transvestites."

Around 9:30, a military band came by, which didn't really seem to have any connection to anything else that was going on, but we were very excited to see them. To see anything, really. The people on the other side of the street got so restless that they started doing the wave, but efforts to transport it to our side of the street weren't successful. This led to speculation that the other side of the street contained all the Americans. Our side was deemed too English for the wave. At this, everyone turned and looked at me, expecting me to take an American-themed stand about the wave, I suppose, but I let it pass.

On their way to the Abbey, all the notables went by fairly quickly in cars. I completely missed Prince William that time, despite the fact that he was in a bright red military uniform. Others I saw as blurs through car windows: Queen Elizabeth a blot of yellow, and ultimately Kate Middleton a bit of lace I mostly saw driving away.

But the crowd got very excited about all of it. They love Prince William. They love him, these people who waited on the street. They were chatting about how lovely he and Harry were to come out the night before and greet some of those who were camped out outside Clarence House. "Like his mum," someone said. "Not like his dad," someone else muttered.

After we saw everyone drive by, the ceremony finally started. It was piped out to the street from giant loudspeakers, so we heard the vows. We heard the hymns, too, and many sang along.

During the ceremony, soldiers arrived to join the police, a sure sign that the exit processional was considered more in need of security than the arrivals had been.

Also during the ceremony, one of the passing horses dropped an impressive wedding gift in the street right in front of where I was standing. Naturally, we booed the horse. Two men soon arrived with a shovel, a broom, and a little cart to clean up after it. We cheered for the shovel. You can't blame them for cleaning that up quickly, because let's face it: you don't want the metaphor.

After a lusty singalong with "God Save The Queen" as it rang from inside Westminster Abbey, there was another lull while we waited for the big show, which was the departing couple and their guests. It had mercifully not rained on us – not a drop – so hopes were high that we'd get to see Kate and William in an open carriage.

And then, after a couple of different groups of people in finery riding horses, there they were, sort of all of a sudden. There's been so much absolute nuttery surrounding all of this that it was a little surreal having them drive right by in an open carriage, just a guy and the girl he just married. No cans tied to the back of the carriage, but you half-expected to see them.

Sure enough, after that – and after Kate's sister Pippa came by in another open carriage with the bridesmaids, looking preposterously pretty – we saw the Queen. The Queen of England. I looked in the glass carriage and saw the Queen of England waving at me. Well, not at me personally. (That I know of.) But it was the Queen of England about whom I was just the other day reading a book, and whom I've been seeing on television all my life. There she was. Just kind of rolling by, maybe 20 feet away, on our side of the carriage, waving. You know. As she does.

Based on their reactions to her, this is a big part of why they were there, all these folks. For the kind of person who camps out for a royal wedding, it's an event when you see the Queen. When she was gone, one of the women near me said, a little sad and shocked, "I didn't get a picture of her. I was so mesmerized."

Of course, there's a time to drown yourself in communal love of country and a time to cut and run. As soon as the carriages had passed, the crush was on to either get out of the area entirely or get over to the vicinity of Buckingham Palace in time for the kiss and the flyover by the Royal Air Force that was, at that time, roughly an hour off. I chose to get out.

Getting off the processional route was a surprisingly harrowing experience. Not one where I was actually injured, but one where I was propelled forward and bumped around hard enough to be reminded how people get injured in crowds. And indeed, all day, there were odd little off moments — people shoving their cameras in front of other people's eyes, someone who wanted to con her way to a better spot by insisting she was just pressing forward for a moment to take a picture, and a woman off to the side of me who decided to angle her large, comical hat in such a way that it continually hit me in the face when she turned her head, which somehow made it considerably less comical, as she may have been able to tell when I gently nudged it out of my vision while muttering, "What is your hat doing?"

But these are small complaints, and not ones that anyone was worried about, particularly. Everyone had fun, everyone saw the Queen (or saw the backs of a lot of other people who saw the Queen), and everyone, from where I was standing, left in one piece in spite of the crowds.

All in all, it was a surprisingly lively party for an event that involved hours and hours of standing around and a few seconds of the world's most famous grandmother waving through a window. 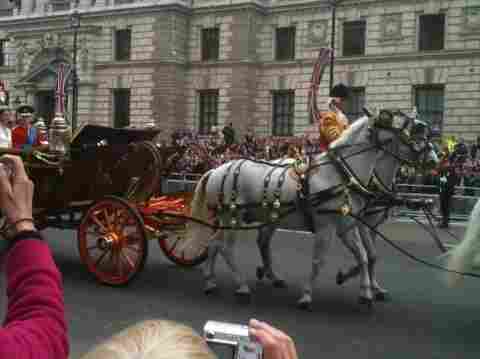 P.S.: I would love to have topped off this post with my very own beautiful picture of the Prince and Kate, but as it turns out, I am the perfect person to cover a news story approximately two seconds before it fully happens.