Accessibility links
Hollywood Stuntman Hal Needham Plays Not My Job You've probably seen Hal Needham hundreds of times: jumping off buildings, driving cars off of bridges, being dragged behind horses. We've invited him here to answer three questions about royal weddings of the past. 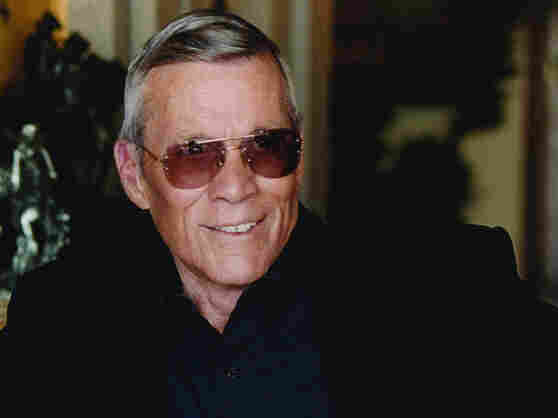 And now, the game where we ask people who do important things about stuff that just doesn't matter. You have seen Hal Needham hundreds, if not thousands of times, although you didn't know it was Hal. He was jumping off buildings or driving cars off bridges, being dragged behind horses. He is the king of the Hollywood stuntman. He became a move director in his own right. He's got a new book out about his life and career, called "Stuntman." We are pleased to have him join us now. Hal Needham, welcome to WAIT WAIT...DON'T TELL ME!

HAL NEEDHAM: Thank you very much. I appreciate it.

SAGAL: Oh, it's great to have you. So you got into stunt work back in the 50s, was it? Was that when you started, or even earlier?

SAGAL: And how did you get started in that business?

NEEDHAM: The first movie I worked was called "The Spirit of St. Louis." It was the story of Charles Lindberg's life.

NEEDHAM: And I had some experience as a wing walker and a paratrooper and things.

SAGAL: Really? So it's like they were standing on the set saying "anybody here willing to stand on this wing while it flies up in the air?" You're like, okay.

NEEDHAM: My part, there was a guy standing on top, but I had to climb down to the wheels, then down a ladder, about 14 or 15 rungs, and hang by my ankles while they flew over the cameras.

SAGAL: Right. And they asked you...

ROY BLOUNT: Where was the stunt? When did the stunt part happen?

SAGAL: You have to prove yourself to break in as a stuntman. Was that the one that made everybody realize this guy can really do it or was there something even more spectacular?

NEEDHAM: No. You know what, it's this long process. Here's the thing that I think really pushed me was my versatility. Because when I came in to the movie business, all the stunt men were specialists. If you did horse work, that's all you did. If you did cars and motorcycles, you did that. But when I came in, I taught myself how to do everything.

SAGAL: Right. So you can, like, drive a car while riding a horse?

FAITH SALIE: Hal, how many bones have you broken?

NEEDHAM: Fifty-six, including my back. I broke my back twice and 56 bones and knocked out a few teeth.

SAGAL: Sure, well who hasn't? I do that in public radio.

SAGAL: Now you became known - you were the stunt double for Burt Reynolds in a bunch of movies.

SAGAL: Wow. It must be weird, like doubling for somebody all that time. You must get to know them pretty well.

NEEDHAM: Oh, I got to know him well enough that when my wife kicked me out of the house, he invited me over to live in his guest house, and I lived there.

SAGAL: So you hung a lot with Burt Reynolds.

NEEDHAM: I doubled him for 18 years, as I said, and then I did live over in his guest house for 12. So I knew him pretty well. As a matter of fact, you know, he was number one box office star in the world, and it was him that gave me the opportunity to become the director.

SAGAL: Yeah, you directed him in "Cannonball Run."

NEEDHAM: My first one was - the first movie I directed with him was "Smokey and the Bandit."

SAGAL: Oh, you were responsible for that, right.

NEEDHAM: Yeah, I did.

SAGAL: And this is before they had like computer generated effects. So when your cars went flying up in the air, spin around and...

NEEDHAM: They're flying through the air.

SAGAL: They're actually flying through the air.

NEEDHAM: You know what, I hate that junk.

SAGAL: Do you really?

NEEDHAM: See a guy jump off of a 250-foot dam into a puddle of water or something and he bobs up like a damn duck out there coming up, you know. And I go, wait a minute, they've lost me. When they start doing the impossible, then they lose me. I've walked out of many shows because of it.

SAGAL: I want to ask you one last question, you mention directing the movie "Cannonball Run." That's the movie with Burt Reynolds and big cast of sort of pirate cross country race. I'm told that is actually based on a real thing. Is that true?

NEEDHAM: Wait a minute, I did that.

SAGAL: You did that?

NEEDHAM: I did that run. The guy that created the race was Brock Yates. And he told me about it, and I said, "you're kidding." I said boy that sounds like the making of a movie. So he and I decided to run the race and give - we had 46 contestants in it. And he and I drove an ambulance. We had took a van and made an ambulance out of it.

SAGAL: So the idea was that this is a race from one coast to the other, east coast to west coast was it?

NEEDHAM: Go any way you want to and whoever did in the least amount of time was the winner. And my ambulance would run 150 miles and hour and Brock's wife volunteered to be our patient. We put her in the back on a gurney.

SAGAL: How many times were you stopped?

NEEDHAM: Just once. What happened, we got stopped in Pennsylvania by the Highway Patrol.

NEEDHAM: And the guy said where are you heading? I said California. He said why? I said, well got a sick lady in the back. "What's wrong with her?" I said you'll have to ask the docs. So we walk around and he talks to the doctor, just like in the movie. And the policeman said, "why do you got to go to California?" She's got a lung disease. He said, "Why didn't you fly her?" Said, oh, we can't even take the northern route, it's too high. We got to go to the south, you know.

NEEDHAM: They turned us loose.

NEEDHAM: One time in Kansas, we had the CB radio on and traffic was getting heavy and I heard the chatter. There was a rodeo letting out up ahead of us.

NEEDHAM: So I got on the CB and I said anybody out there got your ears on, said this is the meat wagon, we're coming through. We got a patient who's name is whatever, so give us a little leeway. A voice came back on and said this is officer so and so and he says I'm controlling the traffic up here and I got them stopped, son, come on through, you know.

SAGAL: Well, Hal Needham, we are delighted to have you with us. We have asked you here to play a game that this time we're calling?

SAGAL: We're going to ask you three questions about the royal weddings of the past, taken from the book, "Royal Weddings: A Very Peculiar History."

NEEDHAM: Wait, some questions from royal weddings of the past?

SAGAL: Yes, these are questions about royal weddings of the past.

NEEDHAM: Okay, go. I don't know anything about it, but try me.

SAGAL: That's the whole point. These questions are taken from a book called "Royal Weddings: A Very Peculiar History" by Fiona Macdonald. So the idea is you answer two out of three correctly, or even three out three. You do that and you'll win our prize for one of our listeners. Carl, who is Hal Needham playing for?

KASELL: Hal is playing for Cassandra Barrington-Harness of Oxford, England.

NEEDHAM: I hope she doesn't need this whatever the gift is.

SAGAL: Let's hope she doesn't have her hopes up. All right.

SAGAL: First question. Now, many times in the past, the royal groom did not meet the royal bride until just before the wedding. So what did King Charles II of England say when he first gazed upon his bride Catherine, in 1662? A: Quickly, men, lower the veil. B: They have sent me a bat. Or C: And you must be Catherine's father?

NEEDHAM: I'd say number three, "And you must be Catherine's father."

SAGAL: That would have been polite. No, it was actually B, the bat comment. They've sent me a bat.

SAGAL: The bat comment apparently was not so much her appearance but her dress, which had these...

NEEDHAM: Oh, I see. You were way beyond me. Go ahead.

SAGAL: Still two more chances here. It was tough for the bride too, in those days. In 1736, Princess Augusta of Saxe-Gotha-Altenburg was shipped off to England at the tender age of 16 to marry the Prince of Wales. She was so nervous upon meeting the royal family that she did what? A: she lied and pretended to be somebody else. B: she took one look at her future husband and started screaming devil, devil, in German. Or C: she vomited upon the Queen.

NEEDHAM: She vomited on the Queen.

SAGAL: That's right; she vomited all over the Queen.

SAGAL: This actually pleased her husband-to-be, who hated his mother, and they had a very happy marriage.

SAGAL: The last question. The greatest royal wedding of all, of course, Charles and Diana in 1981. The couple had only been together 13 times before the prince proposed. And soon after that, the couple was asked, on TV, if they were in love. Diana said, "of course." And the prince responded by saying what? A: Quote, "That's not actually necessary." B: Quote, "Whatever love means." Or C: Quote, "I'd hit that."

NEEDHAM: What was the last one?

SAGAL: I'd hit that.

SAGAL: You're going to take that one?

SAGAL: You're going to choose - I just love this. Being interviewed on live television, the young Prince Charles is asked are you in love, and he turns to his lovely young 19-year-old bride and he says, "I'd hit that."

SAGAL: I can't think of a reason why not. I'm going to let you do that. Sadly, the answer was B, "whatever love means," he said.

SAGAL: I wish you were right, is all I can say. Carl, how did Hal Needham do on our quiz?

KASELL: Well, Hal had just one correct answer, Peter, but he needed two to win for Cassandra Barrington-Harness.

NEEDHAM: I knew she was in trouble.

SAGAL: Hal Needham is a director, stuntman and author of the great new book, "Stuntman," which has more stories than you could ever possibly believe. Hal Needham, thank you so much for joining us.

NEEDHAM: All right, thank you.