Accessibility links
U.N.-Led Syria Probe A Win For U.S. Diplomacy The UN Human Rights Council voted Friday to investigate Syria's bloody crackdown on protesters. The action gives the Obama administration a reason to argue the council was worth joining, despite critics who say it's not worth the effort. 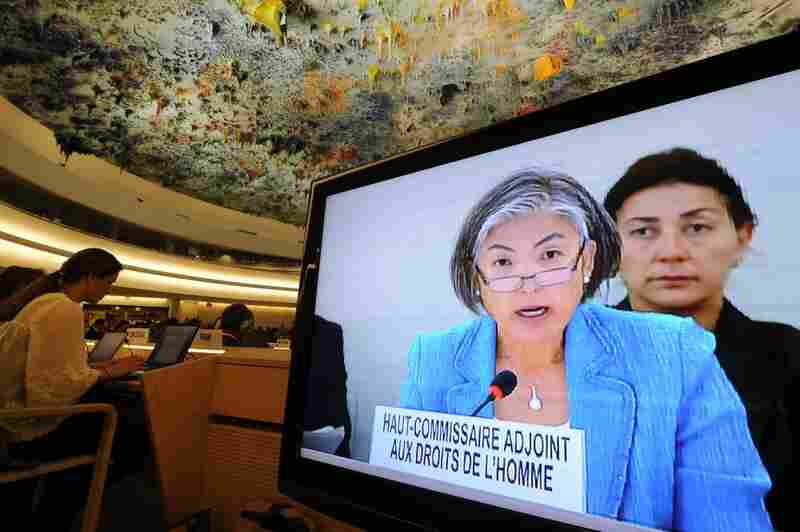 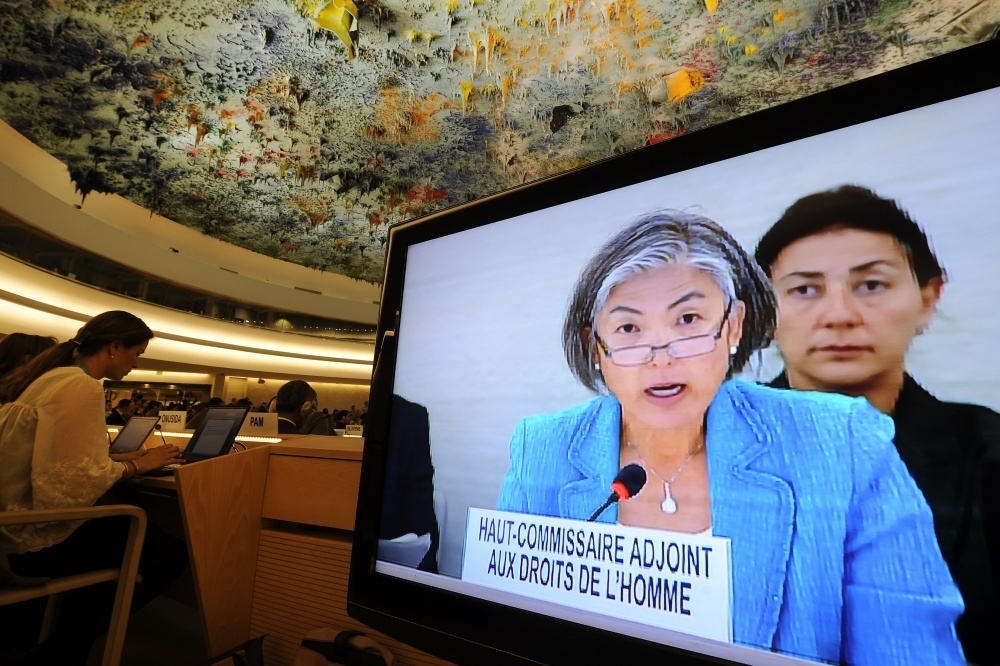 Deputy High Commissioner for Human Rights Kyung-Wha Kang of Korea speaks during a special session of the UN Human Rights Council in Geneva Friday. The council agreed to launch an urgent investigation into Syria's bloody crackdown on protests.

The Obama administration is slowly ratcheting up pressure on Syria, slapping more targeted sanctions on some top officials — including the brother of President Bashar al-Assad.

The U.S. and its partners failed to get the UN Security Council to even agree to a press statement on the Syrian government crackdown on protesters, but it fared better in the UN Human Rights Council, which voted Friday to launch an investigation.

The U.S. has put a lot of effort into improving the council's work and the vote on Syria gave the Obama administration another reason to argue it was worth joining, despite critics who say otherwise.

The Human Rights Council is a favorite target of UN critics in Washington. They often complain that the council is stacked with abusers and focuses mainly on bashing Israel. Deputy Assistant Secretary of State Suzanne Nossel says that's changing, thanks to U.S. diplomacy.

"It still pays too much attention to Israel, but that is no longer the totality of the docket," she says. "There have been strong resolutions. We've set up a special rapporteur on Iran. We've put in place commissions of inquiry on Libya and Cote d'Ivoire."

A Vote Of Support

And as of Friday, there's also a new fact-finding mission for Syria. Kenneth Roth, executive director of Human Rights Watch, was pleased with the outcome of that vote.

"What it shows the people — today who are facing the guns of the Syrian government — it shows that the world stands with them," he says.

Roth says it is also sends a powerful message to the Syrian regime.

"Even Syria's closest friends on the council — governments like Bahrain and Jordan and Qatar and Saudi Arabia — they didn't even vote with Syria. They all abstained or left the room," Roth says. "So Syria really stands alone here, other than a handful of tyrants who voted with them."

"But the diplomatic battle over Syria hasn't ended yet. Roth and many others are now trying to make sure that Syria does not get a seat on the Human Rights Council. That would be a travesty, according to The Heritage Foundation's Kim Holmes, a longtime critic of the council.

"It's actually a protection racket, to tell you the truth," he says. The council's practical function, he says, is "to make sure that some of the bad actors and some of the regional blocs don't get criticized or get on the committee and therefore use their position there to defend themselves when they are committing human rights abuses."

Holmes, the former assistant secretary of state for international organizations in the Bush administration, says he "saw the enormous amount of political clout and influence and time and effort it took for us just to defend human rights, much less promote it. Not only was it was not worth it, it ended up giving more credibility to the institution than it deserved."

"There have been some improvements and some resolutions which have passed, but they are very minor, and, in my opinion, they are offset by the larger losses and embarrassments of the council," he says.

Or An Opportunity To Influence?

The State Department's Suzanne Nossel disagrees. "The idea that by boycotting this body we can so mortally weaken it that its impact will be nullified, I think is just mistaken," she says.

With Nigeria, Brazil and other rising powers on the council, Nossel sees an opportunity for the U.S. to influence them and the international debate over human rights.

"So we have a pretty unique opportunity to take part in those debates, shape those debates, help set the agenda," she says. "By being absent, we would lose out and the voices that we don't agree with would be all the stronger without us present."

Many human rights groups agree, saying the council is slowly turning around from a defender of tyrants to an important tool to for them to hold abusers to account.