Accessibility links
Jon Huntsman: A Political Path, Paved With Detours After losing an election for senior class president, the former Utah governor and U.S. ambassador to China dropped out of high school and joined a rock band — not your typical path into Republican presidential politics. But friends and colleagues say Huntsman hasn't often done things by the book. 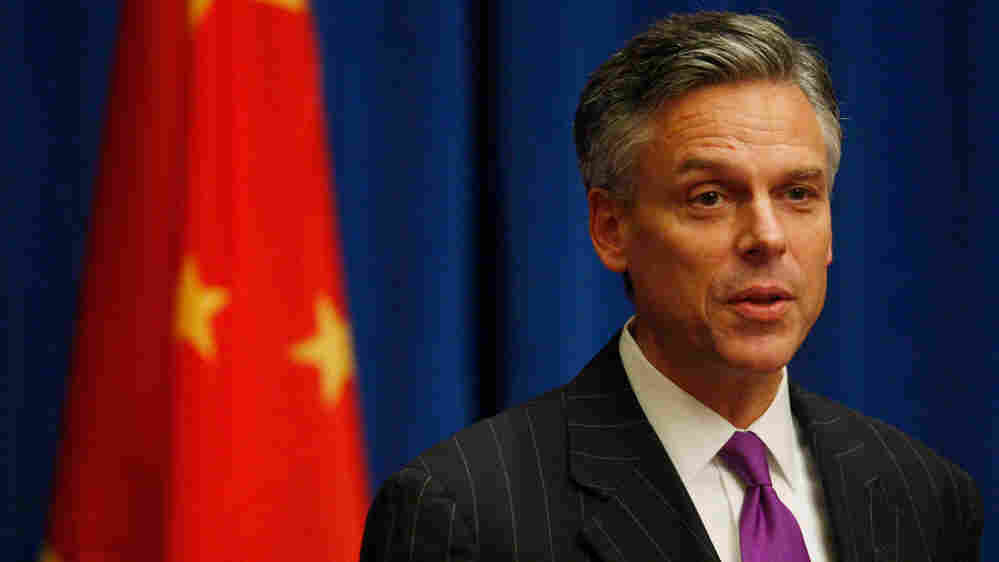 Jon Huntsman, the outgoing U.S. ambassador to China, briefs reporters in November 2009. If Huntsman joins the field of presidential candidates, he may have a difficult time explaining to Republican primary voters why he worked for a Democratic president. Charles Dharapak/AP hide caption

NPR has been profiling some of the Republicans who are considering a presidential run in 2012, to find out what first sparked their interest in politics. Read more of those profiles.

In 1971, Jon Huntsman Jr. visited the White House. He was 11 years old, and his father was a businessman and adviser to Richard Nixon. The young Huntsman, the story goes, met Henry Kissinger that day and helped carry his luggage to the car.

When Huntsman asked where Kissinger was going, the national security adviser said, "Don't tell anyone — I'm going to China."

Almost 40 years later, Huntsman got his own historic call to China, when President Obama named him the U.S. ambassador.

"I never expected to be standing here," the former Utah governor said after Obama made the announcement. "Nor did I expect as national co-chair of Sen. McCain's presidential campaign to be called into action by the person who beat us."

It would be tempting to say that the moment with Kissinger led straight to a lifelong career in politics and diplomacy. But people who know him say that's a stretch.

"With Ambassador Huntsman, I don't see a lot of straight lines," says Kirk Jowers, the director of the Hinckley Institute of Politics and a former adviser to Huntsman.

"If you are really fixated on having that career," he says, "you wouldn't have dropped out of high school to be in a rock band, you wouldn't have done some of these interesting things he's done. You would play it more by the book."

'You Can Always Go Into Politics'

Instead, Huntsman went off-script early. His father was in the container and chemical business, and made a fortune creating those plastic "clamshells" for Big Macs in the '70s. 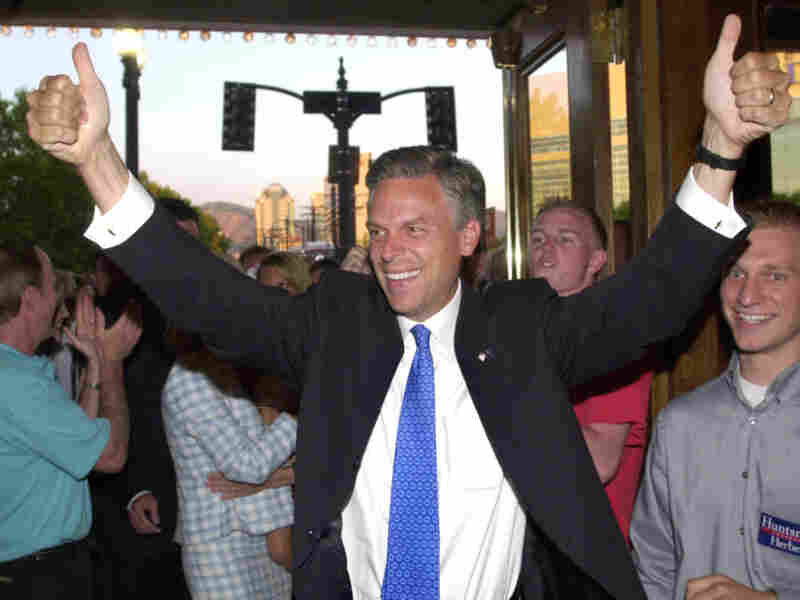 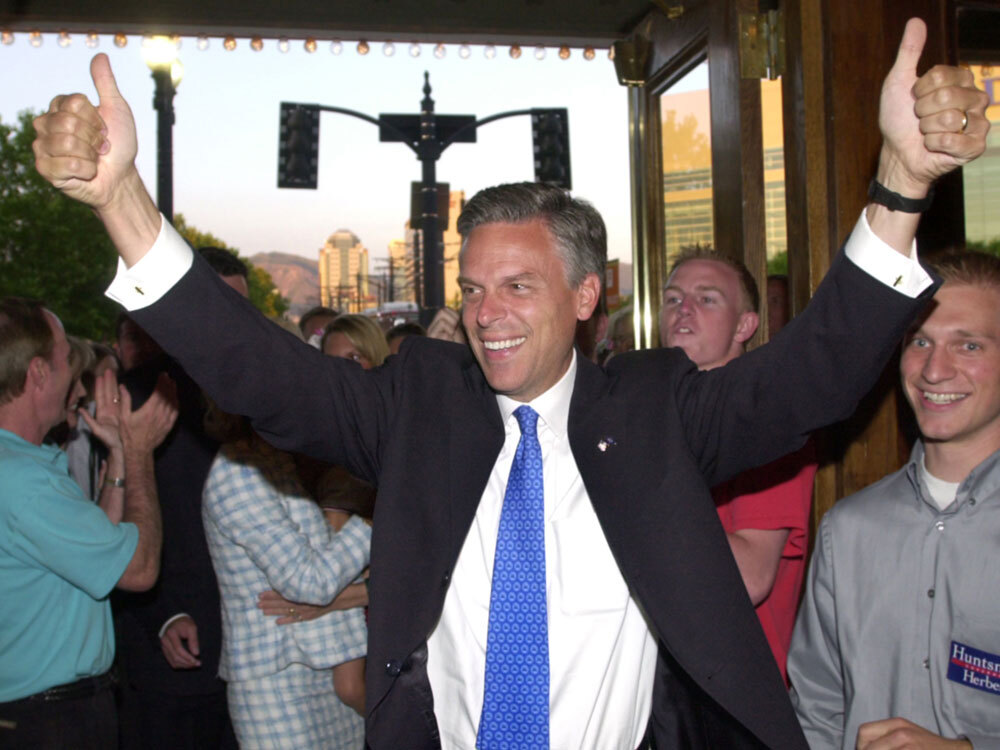 Huntsman arrives at his campaign party during the Republican gubernatorial primary on June 22, 2004, in Salt Lake City.

Huntsman recalled some advice his father once gave him: "Son, if you really want to make a difference in this world, you need to go into business. And if you can't cut it in business, you can always go into politics."

Not that his first foray into Utah politics was very successful. In the late 1970s, Huntsman lost an election for senior class president and took it hard. He dropped out of high school, grew his hair long, and joined a rock band called Wizard.

He never got his high school diploma, and the band never got famous. He later said he thought of himself as a loser. But former Utah Sen. Jake Garn, a family friend, would use different words to describe the long-haired, teenage Huntsman: "intelligent and sharp."

And, says Garn, Huntsman was "more knowledgeable about a lot of things than some 25-year-olds that I knew."

It was not a surprise to Garn that Huntsman emerged from his rebellious phase. He enrolled in college and served a Mormon mission in Taiwan. Then, Garn recommended him for a job as an assistant in the Reagan White House, telling them, "This young man will surprise you."

From Low-Level 'Flunky' To Diplomat

The Reagan White House would end up being the spark to Hunstman's public service career, but not in the political way you might think. Huntsman later described his job there as the "lowest level flunky."

He worked on the advance team for Reagan, a job that would end up sending him around the world. He was with Reagan for a trip to Beijing in 1984, a glimpse of international diplomacy that must have been addictive.

Huntsman, fluent in Mandarin from his Mormon mission, entered the diplomatic world. Lew Cramer, president of World Trade Center Utah, worked with Huntsman in the Reagan and Bush administrations. He says Huntsman took eagerly to jobs like deputy U.S. Trade Representative — and clearly not for the glory.

"You end up basically making unhappy people all around the world in order to get these trade agreements done," Cramer says. "There's just no public spotlight on what you are doing, at least in America."

Huntsman surprised people when he finally decided to move into the spotlight.

In Utah, he easily won two terms as governor — and even there, he didn't follow a straight line. He cut taxes, but also embraced civil unions for gay couples.

And now, as he leaves his job as ambassador, Huntsman will have to craft his career into a compelling story for voters.

It's not going to be easy. In fact, the most famous thing about Huntsman may be President Obama heaping praise on him: "I'm sure that him having worked so well with me will be a great asset in any Republican primary," the president said.

It was called "the death hug," and it might be a tough one to escape.

But getting out of uncomfortable situations is what diplomats do. And surprising people, acording to his friends, is a Huntsman specialty.