Accessibility links
Weekly Standard: Why Is Obama Protecting Assad? Syria has cracked down on those protesting the regime of Bashar Assad, but thus far the U.S. has not issued sanctions against the country. Lee Smith of The Weekly Standard argues that President Obama's decisions in Syria are based in ideology rather than pragmatism. 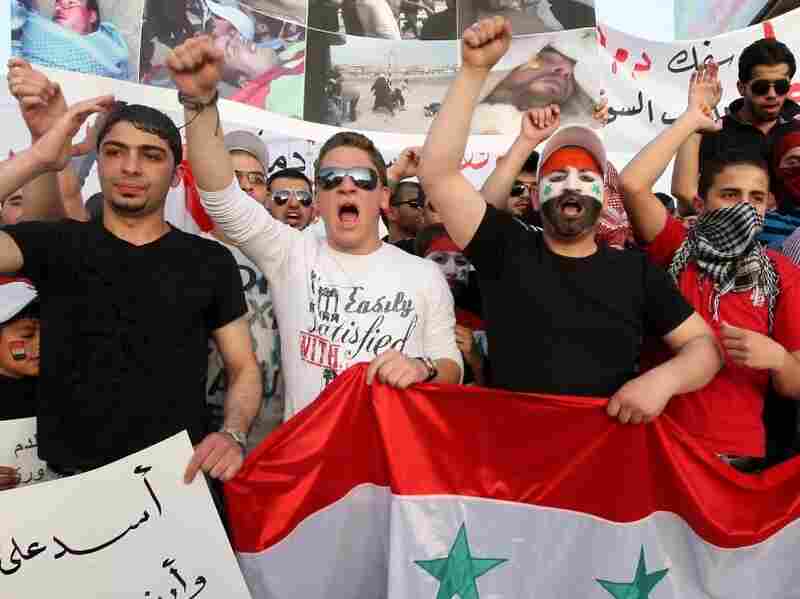 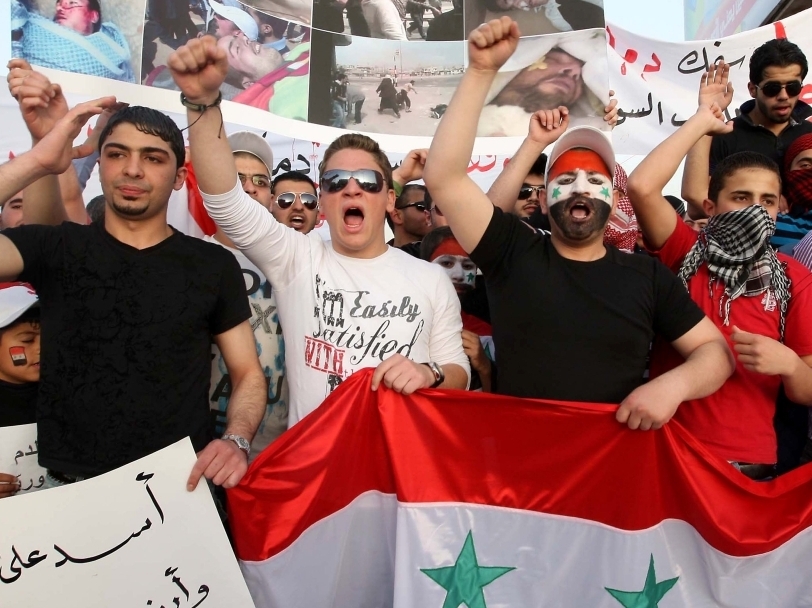 Syrian nationals living in Jordan shout slogans against Syrian President Bashar al-Assad during a demonstration in front of the Syrian embassy in Amman on April 17, 2011.

Lee Smith is senior editor at The Weekly Standard.

A Wall Street Journal editorial yesterday makes the very valuable point that Syria is an enemy of the U.S. Given its role as a transit point for foreign fighters making their way into Iraq to kill American soldiers, its alliance with Hamas and Hezbollah, its alleged role in the assassination of Lebanese political officials and journalists, its support for terror in Iraq, Lebanon, Israel and the Palestinian territories, America has no reason to help preserve that regime. It doesn't matter who follows Assad, if it's an Islamist regime or Osama bin Laden himself, Syria can't possibly be any more damaging to U.S. interests since the only limits the Assad regime observes are those imposed upon it by force.

The Journal suggests that the administration not only withdraw the U.S. ambassador to Damascus, Robert Ford, but also expel the Syrian envoy to Washington — the vainglorious Imad Mustafa, possibly the most toxic presence inside the Beltway. It was rumored a few years ago that the Bush administration contemplated tossing Mustafa out of the country when Damascus laid siege to U.S. allies in Lebanon and meddled in the Iraq war. Somehow Mustafa got a pass then, but it's time for him to go now. The White House doesn't need our diplomatic corps, never mind Syria's, to send tough messages to a regime that only understands extremely tough messages. Sending Mustafa packing would be a good first step.

The Journal lays out further moves the administration might make, including an array of aggressive sanctions laid out by Foundation for Defense of Democracies:

The U.S. and Europe could also freeze and seize the assets of the Assads, designate Syria's elite units responsible for human rights abuses as Specially Designated Global Terrorist entities, impose sanctions on companies providing the regime's tools of repression, and provide the Syrian opposition with encrypted communications technology to dodge the regime's surveillance. All this would damage the regime while signaling the opposition not to lose courage.

Apparently, there is another round of sanctions on the way. Hisham Melhem, the Washington, DC-based correspondent for the Lebanese daily Al-Nahar reported on his twitter feed that "The Treasury Dept. will announce 'targeted list' of officials in #Syria before the 'next big day' (Friday) according to well-placed sources." In another tweet, Melhem reports, "From reliable sources, the list of 'targeted sanctions' in #Syria includes Maher Assad, president Bashar's brother and bloody enforcer."

In other words, it seems that the Syrian president himself is off the hook. It's not surprising the Obama White House is going to give a free pass to the man who's actually calling the shots and murdering his own people. As Aaron David Miller explains in Politico, "Having worked in the State Department for more than 20 years, I know that the Assads hold a special place in the schemes and dreams of U.S. policymakers. U.S. policy always seemed to mean giving him the benefit of the doubt."

It's true that everyone, from Henry Kissinger to Colin Powell, flattered himself into thinking that they could do business with the Assads. But the Obama administration has taken it to a different level. An administration official told the New York Times that "Mr. Assad is sensitive to portrayals of his regime as brutal and backward. 'He sees himself as a Westernized leader,' one senior administration official said, 'and we think he'll react if he believes he is being lumped in with brutal dictators.'"

So why is the administration protecting a regime that makes war against its own people as well as America and her allies? As Michael Doran explains in his latest article in Foreign Affairs ("The Heirs of Nasser"), it is because "the Obama administration has made the Arab-Israeli peace process the organizing principle of its Middle East policy."

From the outset, the Obama administration has believed in the importance of pursuing a "comprehensive" settlement — meaning a peace treaty that includes not just the Palestinians but, in addition, all the Arab states, especially Syria. As the administration has failed to make any headway in Israeli-Palestinian negotiations, the Syrian track has grown in importance. Consequently, Washington has chosen to treat Syria not as an adversary deserving containment but rather as a partner in the negotiations deserving of engagement. In fact, the Obama administration sees the peace process as an instrument for wooing Syria away from Iran. At the very least, Washington believes that by bringing Damascus to the negotiating table, it can give the Syrians an incentive to tamp down Arab-Israeli violence. But such a strategy fails to acknowledge that the Syrians understand the thinking in Washington all too well — they recognize the United States' fervent desire for negotiations and see in it an opportunity to bargain. Damascus seeks to trade participation in diplomatic processes, which costs it nothing, for tangible benefits from Washington, including a relaxation of U.S. hostility. In short, the Syrians believe that they can have it both ways... And why would they think otherwise? After all, nobody held them responsible for similar double-dealing in Iraq, where they were accomplices to the murder of Americans.

In other words, the Obama White House's Syria policy is not pragmatic and cautious. Rather, it is adventurist and ideological. The administration is sheltering Damascus in order to salvage its own bankrupt Middle East policy. If he loses Assad, Obama is lost in the region and the administration will be forced, obviously against its will, to recalibrate. The question is, how much will U.S. interests suffer in the meantime?