Accessibility links
From Millionaire's Son To Most-Wanted Terrorist: Osama Bin Laden Is Dead The mastermind behind the Sept. 11, 2001, attacks was killed in an operation led by the United States, President Obama said Sunday in a late-night statement at the White House. Details are still emerging about Osama bin Laden's death. But his life ran a fascinating trajectory: from the pampered son of a Saudi millionaire to the world's most-wanted terrorist.

Osama bin Laden, the mastermind behind the Sept. 11, 2001, attacks that killed thousands of Americans, was killed in an operation led by the United States, President Obama said Sunday. Bin Laden was 54.

A small team of Americans killed bin Laden in a firefight at a compound in Pakistan, the president said in a dramatic late-night statement at the White House.

Details about bin Laden's death are still emerging. But his life ran a fascinating trajectory: from the pampered son of a Saudi millionaire to the world's most-wanted terrorist.

In telling the story of Osama bin Laden, a logical starting point is the day he must consider his greatest triumph — Sept. 11, 2001.

Within hours of the attacks, U.S. officials were pointing to bin Laden as the prime suspect. President Bush said he wanted bin Laden "dead or alive."

Bin Laden at first denied responsibility for the attacks. But in December 2001, U.S. officials produced what they called a "smoking gun" — a video, showing bin Laden in his trademark camouflage jacket and white cap, lounging on a flowered sofa. According to the translation provided by the Pentagon, bin Laden makes clear he played a direct role in engineering the attacks.

Bin Laden is believed to have been born in 1957. He was the 17th of 57 children, according to research by the 9/11 Commission. His father made a fortune in the construction industry in Saudi Arabia. Bin Laden grew up playing soccer, riding horses and running. The young bin Laden may have gotten his first taste of radical Islamist theory at university, in Jeddah. Peter Bergen, who has written extensively about al-Qaida, said bin Laden's years at King Abdul-Aziz University exposed him to influential Islamist thinkers.

"One of his teachers, Mohammed Quttb, was the brother of perhaps the Lenin of the whole Jihadist movement — Sayeed Quttb, who had died earlier in Egypt," Bergen said. "Another was a guy called Abdullah Azzam, with whom bin Laden would later go on to form a kind of prequel to al-Qaida, a group called the Services Office that was instrumental in getting Muslims from around the world to come to Pakistan to fight against the Soviets." 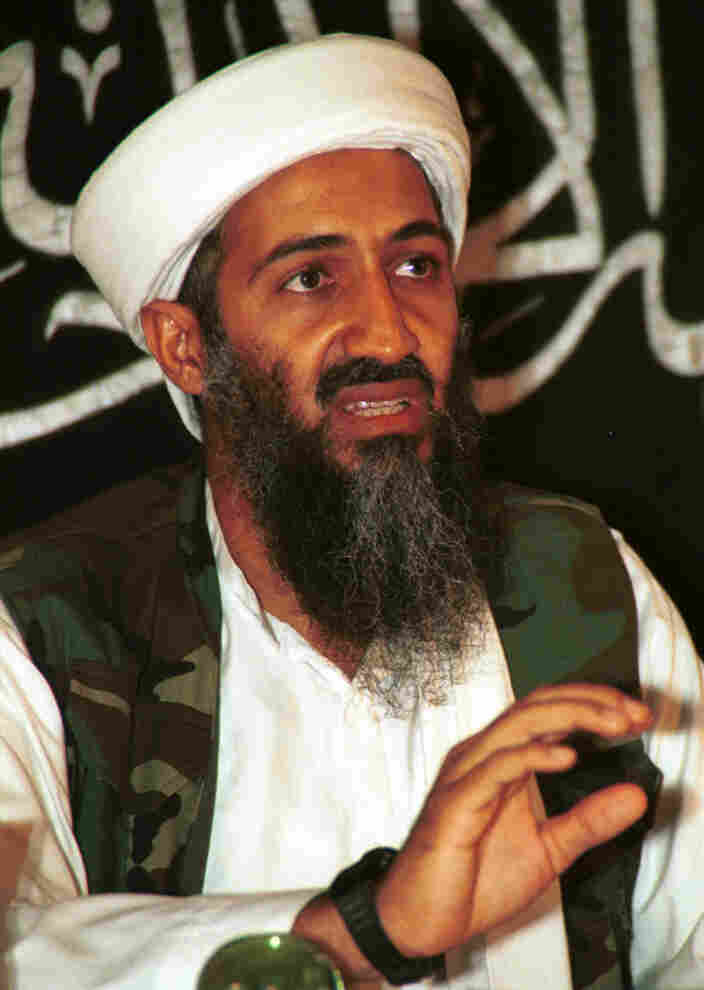 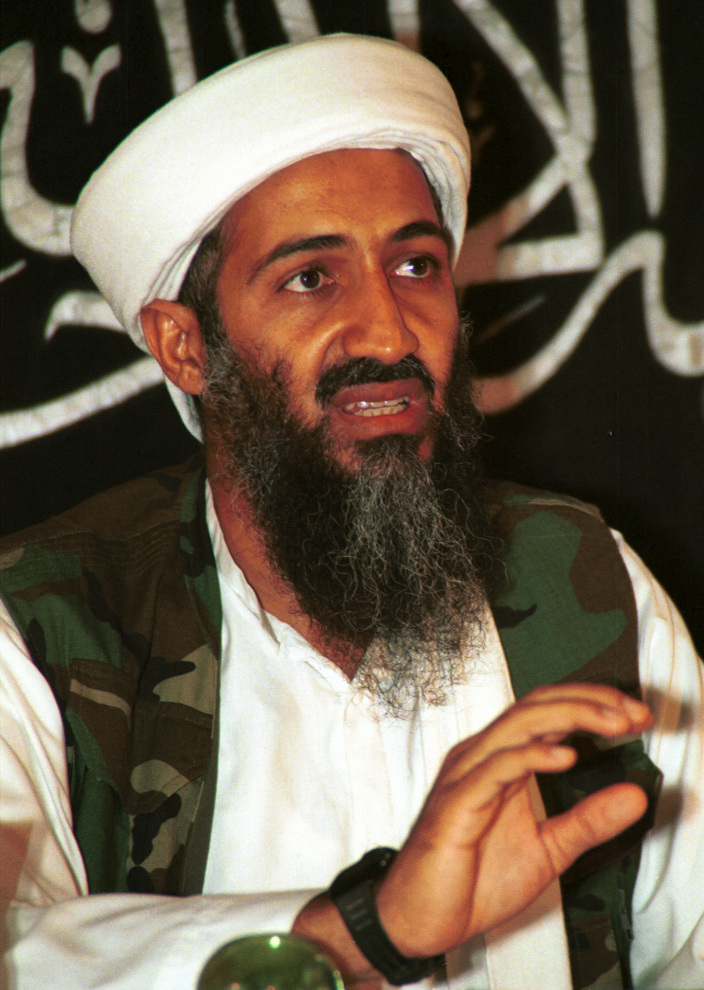 In this 1998 file photo made available in March 2004, Osama bin Laden speaks to journalists in Khost, Afghanistan. On Sunday, U.S. President Obama announced that bin Laden is dead.

The fight against the Soviets, following Moscow's invasion of Afghanistan in 1979, was a defining struggle in bin Laden's life. He traveled to the region, raised money from other wealthy Muslims to finance the fight and engaged in at least one battle himself. The war in Afghanistan lasted 10 years — basically the whole of the 1980s. John Parachini, an expert on terrorism at the Rand Corp., said for bin Laden and millions of other Muslims, those years created a movement.

"In this period, there is an awakening throughout the Islamic world about fighting a great struggle — beyond the struggle that many fundamentalist Islamic groups were fighting in their own nations," Parachini said.

For bin Laden, that struggle found expression within the Salafi movement. Salafis believe that over the centuries, the message of Islam has been corrupted. They want a return to the "pure Islam" practiced by the Prophet Muhammad and his immediate successors. Bin Laden has presented himself as the embodiment of the Salafi movement — a spiritual leader, for whom war is a religious obligation, wherever Muslims are being oppressed. It's a powerful message. Millions of Muslims who don't support violent jihad still saw bin Laden as the most capable voice speaking out against corrupt national leaders and the West.

In 1989, when the Soviets withdrew from Afghanistan, bin Laden went home to Saudi Arabia. But his relations with the country's leaders soon soured. Bin Laden's passport — and eventually his citizenship — was revoked. So he left, and spent the next five years in exile in Sudan. John Parachini said those years, from 1991 to '96, were a critical time.

"Here is where the modern-day bin Laden really comes to the front," Parachini said, "because it's he, with his considerable wealth, operating in a weak state. So here you have this confluence of interest of a newly emerged Islamic state, and a newly emerged, subnational, loosely affiliated collection of people that we now know as al-Qaida."

But as bin Laden's influence grew, the U.S., the United Nations and Saudi Arabia all began pressuring Sudan's government to force him out. On May 19, 1996, he left. He found a home back in Afghanistan, and soon forged a relationship with the ruling Taliban. They needed his cash, and bin Laden needed a base where he could concentrate on building his terrorist network.

Peter Bergen met bin Laden during those years in Afghanistan. He's now a director at the New America Foundation in Washington. Back in March 1997, he was a producer for CNN. He and two other CNN staffers were picked up at dusk, blindfolded and driven through the night to meet bin Laden.

"When he came out of the darkness — he's 6-foot-5, walks with a cane — he didn't seem psychotic. He was quite intelligent, obviously. He seemed like a pretty serious sort of person," Bergen said. "It puzzled me, however, how he was going to pull off attacks against the U.S., given that we're sitting in a mud hut in the middle of the night in Afghanistan."

As it turned out, al-Qaida planning was already well under way for the 1998 bombings of the U.S. embassies in Kenya and Tanzania in which 224 people were killed.

President Bill Clinton addressed the nation with this explanation: "Our target was terror. Our mission was clear: to strike at the network of radical groups affiliated with and funded by Osama bin Laden, perhaps the pre-eminent organizer and financier of international terror in the world today."

Bin Laden, of course, did not die in the U.S. strikes. Instead, he spent the next three years preparing for what would be his most spectacular attack. Sept. 11 was a triumph for al-Qaida — but it also provoked swift retribution. On Oct. 7, 2001, U.S. and British forces launched airstrikes on Afghanistan. Bin Laden was forced to go on the run. In the years that followed, bin Laden's ability to communicate with his followers was hampered. But bin Laden's message — his vision for jihad — remained ambitious.

"Bin Laden and his followers genuinely believe that what they are about is reformulating the global order," said Daniel Benjamin, now the State Department's point man on terrorism issues.

"They very much think of restoring Islam to the point of its greatest glory, 1,300 years ago. They want to have a single Muslim community stretching from the north Atlantic — or Spain — to Indonesia. They do think in these kinds of messianic terms, in the hope of recasting the globe," Benjamin said.

Benjamin believes that message resonated among Muslims around the world, because bin Laden cast his agenda as springing from religious — rather than political — motivations. Bin Laden is a deeply pious man, Benjamin said. And to top it off, he had the money and fundraising skills to finance his ambitions.

"So he really reshaped the struggle. He's managed to create both an authentic cause, an authentic ideology, and to find the means to carry it out," Benjamin said. "And I fear that the path that he hewed, he cut, is one that others are going to travel for some time to come."

The question now will be: What happens to the movement that Osama bin Laden helped create?

Osama Bin Laden Is Dead; President Tells Nation 'Justice Has Been Done' May 1, 2011