Accessibility links
Foreign Policy: Burying Our Anger With Bin Laden Osama bin Laden, terrorist and mastermind behind the Sept. 11 attacks is dead, but David Rothkopf of Foreign Policy cautions that we should think before we celebrate. If we can bury the confusion and anger brought out by Bin Laden, this will be the end of a dark chapter in America's history. 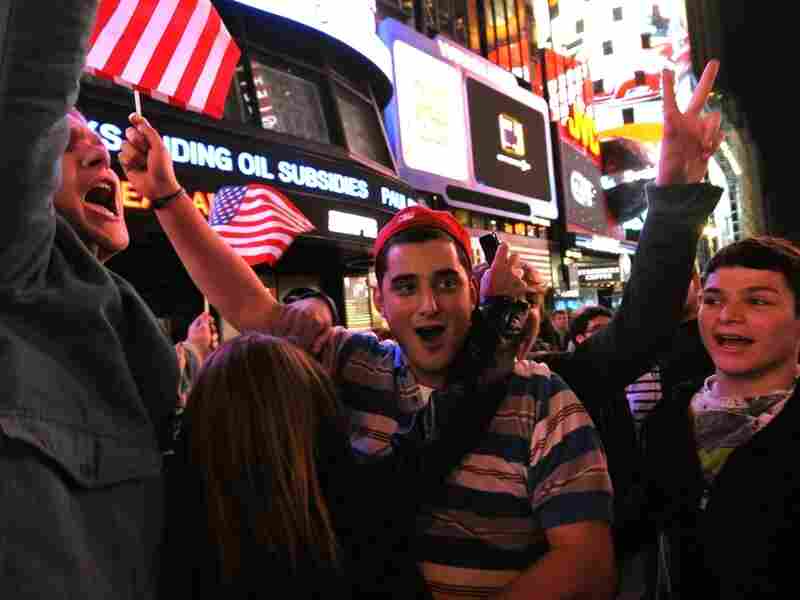 People gather in Times Square shortly after the announcement from the President Obama that Osama bin Laden was dead. Celebrations have also broken out at ground zero, and in Washington. Timothy A. Clary/AFP/Getty Images hide caption 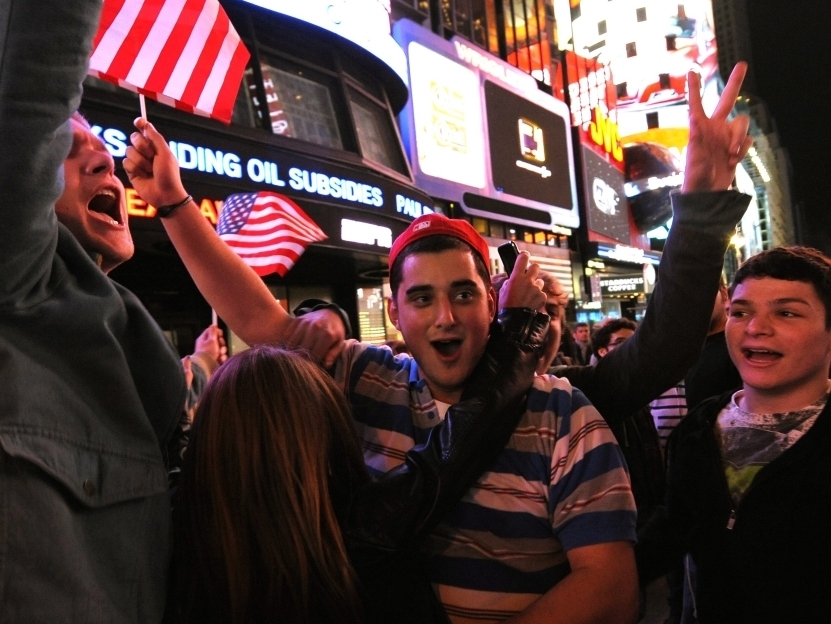 People gather in Times Square shortly after the announcement from the President Obama that Osama bin Laden was dead. Celebrations have also broken out at ground zero, and in Washington.

David Rothkopf is a visiting scholar at the Carnegie Endowment for International Peace and President and CEO of Garten Rothkopf.

The killing of Osama bin Laden, like the Sept. 11 attacks, is both deeply important and of such symbolic resonance that it invites misinterpretation.

The operation that ended the life of this century's most prominent mass murderer was an undeniable and satisfying success for the United States military and for all those who have worked through two administrations to achieve it. It appears to have been executed with precision and daring and to be managed by the Obama national security team with great professionalism.

It brings a degree of closure to a particularly dark chapter in recent history and, one hopes, a degree of justice for the many who have been caused so much pain by this vile man.

I will admit though that I am made uncomfortable by jingoistic celebrations that broke out when the news of the successful operation in Abbotabbad was announced last night by the president. First, my thoughts went to the families of those who lost loved ones on Sept. 11, for whom this must trigger feelings much deeper and more complex than mere hoopla. One of those, a guy I can only think of as a the kid who lived across the street from me when I was growing up, a laughing, energetic, dependable participant in neighborhood softball and football games, lost their son, brother and husband 10 years ago. Osama may be dead, but it doesn't fill the void created when Todd's offices at the World Trade Center collapsed amid fire and ashes. Another good friend has channeled her feelings of immeasurable sadness into the building of the Pentagon memorial. Osama is gone and she and her family are left with a small stark public shrine and memories that will ache long after this moment passes.

It's a moment of satisfaction, of justice, of military and intelligence success, even one that sends a message about America's relentless determination to avenge a brutal crime. But there is little to be dancing in the streets about here. Leave that to others — to those who danced in the streets when they saw the twin towers fall — who have been dehumanized and permanently shamed by their loss of perspective.

Dignity alone does not suggest we should be circumspect in our appreciation for this achievement. America lashed out in the wake of Sept. 11 in ways that were so excessive and ill considered that it will be decades before we fully recover from the dishonor we brought upon ourselves. That we did played into Osama's hands. In fact, our invasion of Iraq, Abu Ghraib, Guantanamo, and the compromising of our fundamental values were all even more important signs of the success of his plan than the acres of destruction in lower Manhattan or the blackened hole in the side of the Pentagon.

Bin Laden was as low as they come, a twisted perverter of the values of the society and culture he asserted he was championing. He was not even a master terrorist, having far more failed plans than successes to his name. But he did possess a keen understanding of the power of symbolism as the ultimate force-multiplier at any terrorist's disposal. He knew that to strike at American icons would compound the impact of the slaughter he wrought. He wanted to illustrate national vulnerability and to incite national over-reaction. And unsurprisingly, he succeeded and for a decade America redirected the might of the most powerful nation the world has ever known not to contain an existential threat but to hunt down a criminal.

The imagery and emotional power of the losses of Sept. 11 led us not only to overstate the power of the man who gave the order to unleash them but to spend trillions, sacrifice thousands more American lives, trigger the deaths of hundreds of thousands of others and carve a deep wound into the psyche of the planet. We called it a "war on terror" but it went beyond a measured reaction and was bloated and misdirected by a form of grief and anger-fed national dementia. Hopefully, with this well-executed Navy Seal operation deep into the heart of the country that coddled, protected and hid bin Laden, Pakistan, some of the demons may be released and we may regain some of the perspective that we have lost.

(We can only imagine what the intelligence from this attack an hour north of Pakistan's capital in a city with a very active Pakistani military and government presence will ultimately tell us about the undoubted complicity of the Pakistani intelligence service in protecting the world's public enemy number one.)

Perspective however, requires not only that we struggle not to conflate the enormity of our sense of loss over what happened on Sept. 11 with our sense of the size of the enemy we faced. It also requires not overstate the impact of the death of bin Laden on the real, measurable and enduring terrorist threats we do face. While al-Qaida may have lost its leader, the organization has morphed over the years into a very real if fragmented threat that will not go away in the wake of this American victory. It is a threat that we and our allies must monitor and contain via every means at our disposal even as we come to recognize that there are far greater threats to our national security — some economic and of our own making, some slowly building on the international scene with a rapidly shifting global power structure and clouds gathering over critical major power relationships.

Sept. 11 was not Pearl Harbor. Al-Qaida was not and is not a historic enemy like World War II's Axis powers. Bin Laden is not Hitler. We are not in a global war against an equal nor with one with any real capability of displacing us. But we have just buried an enemy who cannily recognized that the only power right now capable of bringing down America is America. He sought to successfully use us against us and he was for too long successful to too great a degree. That is why, for this success to be truly worthy of celebration, we must bury with him the confusion and disorienting anger that has distorted our world view for a decade. We must recast the real terrorist threat in proper size — eliminate it wherever we can — and remember that what's greatest about America can't be brought down by bombs or hijacked aircraft or by an amoral hate-monger furtively holed up in a walled compound in North Central Pakistan. It is within us and up to us alone to grow or diminish.