Accessibility links
In Afghan Outpost, Sunset Means A New Attack The soldiers at Combat Outpost Charkh in Afghanistan's Logar province have seen some of the fiercest combat of the war in the past six months. They say they have made gains, but the insurgent attacks still come every evening, like clockwork.

For Bravo Company at Combat Outpost Charkh in Afghanistan, the insurgent attacks have become like clockwork.

"They attack right at nightfall, 15 minutes before dark," says Sgt. Jonathan Ray, sitting in the dirt on a rooftop bunker in the middle of the bazaar in Charkh village. "Got so bad that my soldiers would have alarms set. Somebody's alarm would go off, and we'd just move over to the walls and wait for it."

The Bravo Company of the 2nd Battalion, 30th Infantry Regiment, 4th Brigade of the 10th Mountain Division has seen some of the fiercest combat of the war in the past six months, as it has struggled to take the bazaar away from open insurgent control.

With about 140 soldiers, it has racked up 50 Purple Hearts in grenade and mortar attacks, ambushes and straight-ahead gun fights. The company lost five soldiers.

But this isn't the high eastern mountains or the remote southern deserts. Charkh, in Logar province, sits on the doorstep of Kabul, about 50 miles as the crow flies from the seat of the fragile Afghan government. Logar is supposed to be part of an expanding inkblot of security around the capital. Bravo Company is glad to have at least achieved an inkblot in Charkh bazaar.

They attack right at nightfall, 15 minutes before dark. Got so bad that my soldiers would have alarms set.

"We've separated, I think, the enemy from a large part of the populace," says Capt. David Wilson, commander of Bravo Company, as he walks the half-mile from his fortified combat outpost toward the village of Charkh. He says this walk would have been suicidal only weeks ago.

"This used to be their center," he says. "Now they have to attack us here from the outside."

Bravo Company arrived at Charkh in October, landing in a maelstrom of mortars and rockets. The men wore heavy body armor even to the latrine inside their base. Stepping a hundred yards off the base almost guaranteed a gunfight. In November, the soldiers made a push into the bazaar, and the insurgents fled to the western side of the river.

But the bazaar was still within a stone's throw — or a grenade's throw — away from insurgents on the other side of the river bank. After months of diving for cover as insurgents lobbed grenades across the water, Bravo Company pushed over the bridge to the other side, and it now keeps a platoon stationed there and another in the bazaar.

Gunfire has become much less common, and even the mortar attacks on the base have diminished. Still, it's like clockwork, Lankford says.

"Later in the afternoon is when you have to watch out. Around 1700 [5 p.m.], you'll see it today, all the shops close up. ... Less people are out ... starting to get dusk. They try to use the sun to their advantage; they'll try and attack from the west. So you'll see today, later today," he says, sitting on the west side of the river with his men from 3rd Platoon.

His men have a haggard look and a dark, bloody sense of humor. Lankford even jokes about Bravo Company's high rate of casualties, and some of the men who have more than one Purple Heart.

"Most of them ... come back. Like that other soldier I was telling you about that got hit by the grenade over there? ... He got hit in the butt. Seems like everybody's getting hit in the butt," Lankford says, laughing. "So anyway, he's coming back, he should be back tomorrow."

Around 5 p.m., as predicted, a soft boom of a mortar launch is followed by a loud crash up the hill by the American base. The men spring into action as they have done hundreds of times already, loading weapons and adjusting their body armor.

Lankford gets on the radio and hears that the mortar slammed into the garbage dump just outside the gates. A civilian and his 7-year-old son were hit by shrapnel. The boy's wounds are serious — he's lost some fingers and toes and is bleeding heavily.

It's been a long year. Lost quite a few people and just not really sure when this is going to end. Let's hope it doesn't end soon for me.

A medevac comes in to take care of the wounded civilians, and attack helicopters circle. One of the pilots radios down to 3rd Platoon's forward observer, Sgt. Seth LaCroix, that a man with a rocket-propelled grenade launcher is moving near the bazaar.

As the platoon moves in pursuit, shopkeepers hurry to shutter their market stalls. The town is a series of qalats — residential compounds made of high mud-brick walls, built along irrigation canals, with waist-high walls around gardens and orchards. The man with the RPG could be hiding around any corner.

But more likely he cached his weapon, caught his breath and then quietly walked away, perhaps saying, "Salaam alekum" — "Peace be upon you" — to the soldiers as they passed him by.

"It doesn't bother me," says Cpl. Andrew Collins, a lean young man just returning from the combat hospital and still carrying a small piece of metal shrapnel in his knee.

"You gotta be friendly toward all of them because you never know who it is," Collins says. "A guy acting shady might not be. Them being able to walk up on me and say hi to me, even if I know they're Taliban I can't do anything because they don't have a weapon."

After a chase around the labyrinth of alleys for a half-hour, darkness starts to settle in and the evening call to prayer sounds from a few different mosques at once.

The men call it quits and rush back to their bunkered house, wading through the shallow river. The insurgents rarely attack after dark, because the Americans have night-vision equipment. 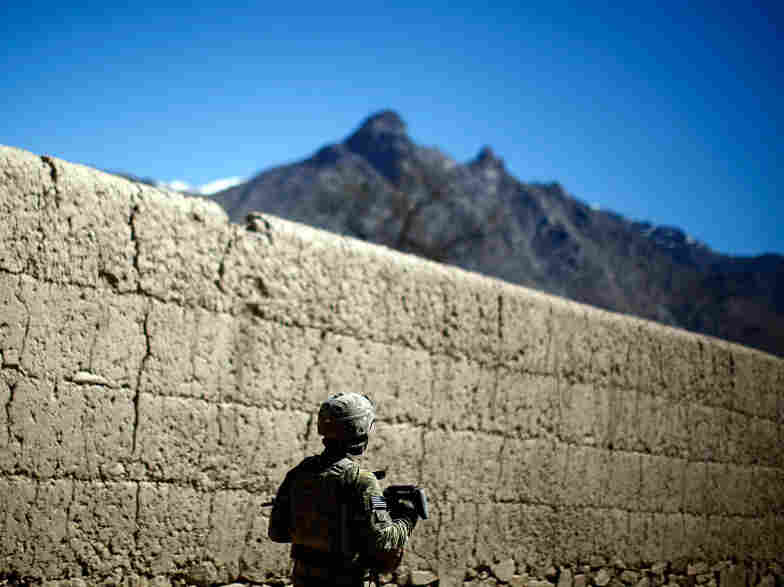 A soldier on patrol in Charkh. Until Bravo Company took control of both sides of the river, insurgents would often lob homemade hand grenades from behind the mud-brick orchard walls. David Gilkey/NPR hide caption 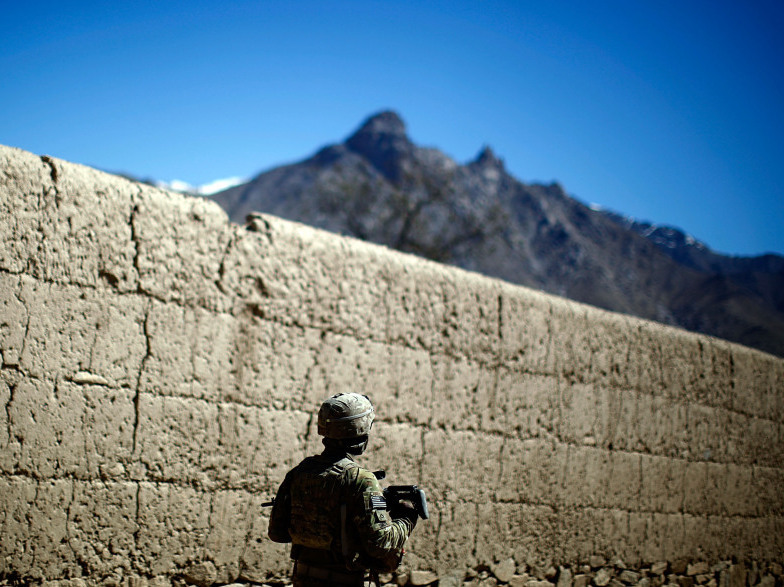 A soldier on patrol in Charkh. Until Bravo Company took control of both sides of the river, insurgents would often lob homemade hand grenades from behind the mud-brick orchard walls.

Dawn means more patrols in the bazaar — the men take two-day shifts before returning to base. First Platoon is on a rooftop, across the street from where their old outpost was demolished by an insurgent bomb in February, killing four Afghan army troops and one American, 21-year-old Spc. Rudolph Hizon.

There's more down time, a mix of contemplation and humor — one of the sergeants has "I love you" written across his chest plate; another has "born to kill." They feed an adopted street puppy named Doug scraps from the rations. Spc. Zachary Williams admits that he's tired.

"It's been a long year. Lost quite a few people and just not really sure when this is going to end," Williams says. "Let's hope it doesn't end soon for me."

Williams is on his first combat tour, but his father is an MP with six deployments to Iraq and Afghanistan. He has cartoon tattoos all over his arms — and in simple black script around one wrist, the name of a soldier who died in a roadside bomb and ambush in January.

"It just says 'Ira Laningham,' which was his name, and the day he was born [and] the day he was taken from us," Williams says. "That was a hard day. They hit us with an IED on a bridge, and Laningham was the driver of that truck. And we lost him and Sgt. [Ethan] Hardin that day. Sgt. Hardin was in the back. ... Laningham was killed in the explosion, and I really hope so were the rest of the people in the vehicle so they didn't have to burn alive, because the whole truck went up in flames that day."

The men trade stories. Even those who have seen previous tours in Iraq say fighting in Charkh has been heavier, and they have had a chance to see their enemy up-close. They even pulled off a successful ambush of their own, catching insurgents out in the open. They stretch out in the dirt and chat, waiting for what they know is coming.

Then the sun gets low, the base gets rocketed, the men turn on like a switch, and it starts all over again.