Accessibility links
In Small Towns Hit By Twisters, 'You Feel Ignored' The tornadoes that tore through the Southeast last week did untold damage to towns big and small. But most of that attention so far has focused on the big cities. In the small community of Hackleburg, Ala., some residents say they feel overlooked. 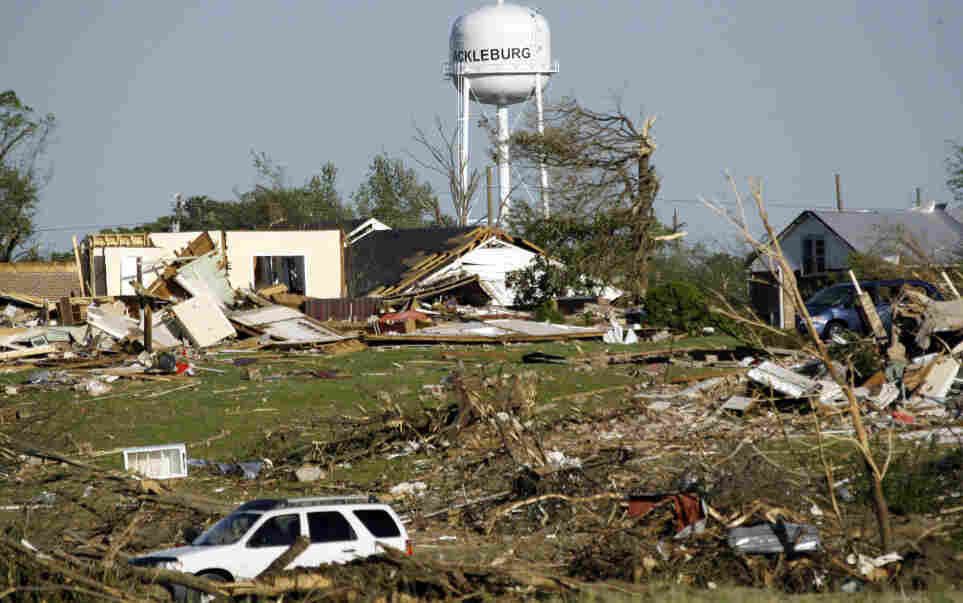 A water tower stands amid the damage in Hackleburg, Ala., on Friday, after a tornado earlier in the week destroyed much of the small community and caused nearly three dozen deaths. Rogelio V. Solis/AP hide caption

Federal officials say there were more tornadoes on a single day last week than on any other day in U.S. history. In all, 312 twisters set down across Southeastern states, causing billions of dollars in damage and killing more than 340 people.

Alabama took the brunt of the storm, with massive destruction in Birmingham and Tuscaloosa, home to the University of Alabama. Many smaller towns in Alabama are also devastated, but some of those communities are feeling ignored. 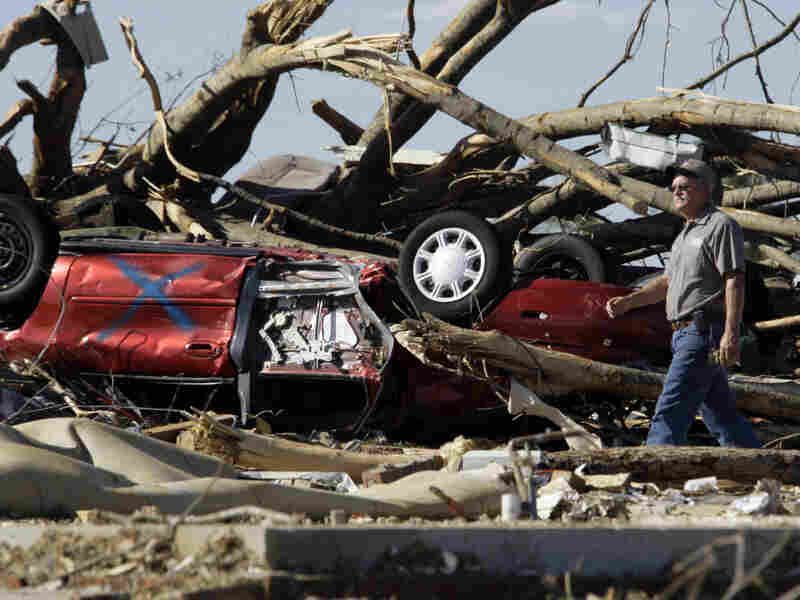 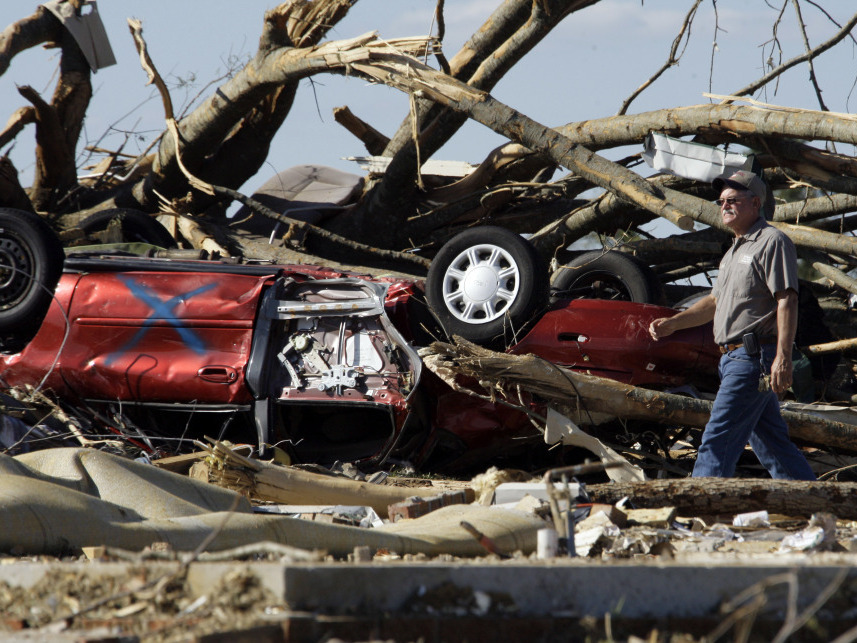 James Nicholas surveys the damage in Hackleburg, Ala., on Friday.

In the northwest town of Hackleburg, a backhoe pushes what's left of Cathy Purser's house into a big pile. She and her husband had lived in the house for 34 years.

"We were just lucky. All of my neighbors is gone — they all died around me, every one of them," she says. "It's two people up there on the hill, the lady right there, the man and woman behind me, the lady behind them, a lady on down the road."

There are nearly three dozen confirmed deaths in this town of 1,400.

Purser and 10 other people survived by huddling in her basement. She says it took days for news of the devastation to reach the rest of Alabama.

I don't know if they don't realize how bad it is here, or if they just ... I don't know, you know. It kind of makes you feel ignored in a way.

"People know Tuscaloosa, they know Birmingham," says state Sen. Roger Bedford. But, he says, what people don't know is that dozens of small communities like Hackleburg, Phil Campbell and East Franklin were also hit by tornadoes.

On Monday, Bedford was in Hackleburg, his mother's hometown, to see the damage for himself.

At the First Baptist Church, local residents and volunteers line up for a hot meal. Over plates of macaroni and cheese, Wanda and William Terry say a family member has a generator. They've been watching some of the TV coverage, and every five minutes, they see a story about Tuscaloosa.

"I don't know if they don't realize how bad it is here," says Wanda, "or if they're just — I don't know, you know. It kind of makes you feel ignored in a way, you know?"

"That's true," William says. "When you think about it, Tuscaloosa's a much bigger city, and they have a lot more injuries and probably casualties, too, you know, and so they have to concentrate where the need is needed first. In the bigger areas, they need more help there than what they do here." 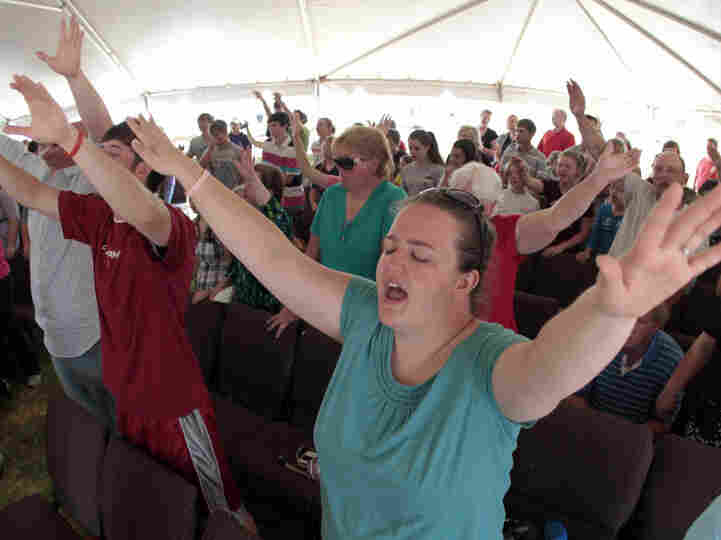 Brianne Knowles prays during a church service in Hackleburg, Ala., on Sunday. The church was heavily damaged in last Wednesday's tornado, requiring parishioners to use a tent. John Bazemore/AP hide caption 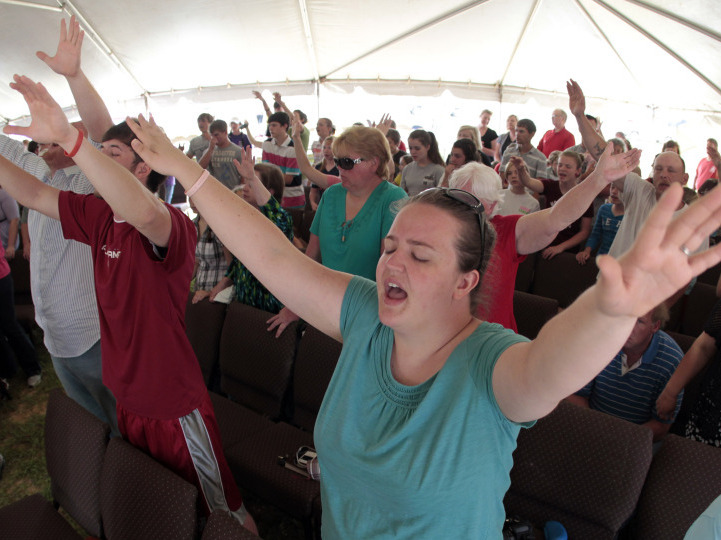 Brianne Knowles prays during a church service in Hackleburg, Ala., on Sunday. The church was heavily damaged in last Wednesday's tornado, requiring parishioners to use a tent.

Dave Fagan, the damage assessment manager for an American Red Cross team, says part of the challenge with small, rural towns is that rescue crews and volunteers have a hard time getting into them.

"If we have roads — like I noticed the bridge was out in one area down here. We can't get there, " he says. "We gotta find some other way of getting there."

There's just one main road to town, and for a while it was impassable because of downed trees. The town also doesn't have any local media — no TV, no radio — so it's hard to get word out about the damage.

The Red Cross on Monday declared Hackleburg 75 percent destroyed. Every building in downtown is a pile of rubble. The school is demolished. The largest employer — a Wrangler jeans plant — may not reopen.

Everyone agrees it will be years, not months, before Hackleburg and other small towns across the Southeast recover.