Accessibility links
Mo. Levee Blast Eases Threat To Illinois Town But the demolition project did nothing to ease the risk of more trouble downstream, where the mighty river is expected to rise to its highest levels since the 1920s in some parts of Tennessee, Mississippi and Louisiana. Authorities were considering using techniques similar to the Missouri project to divert on oncoming rush of water. 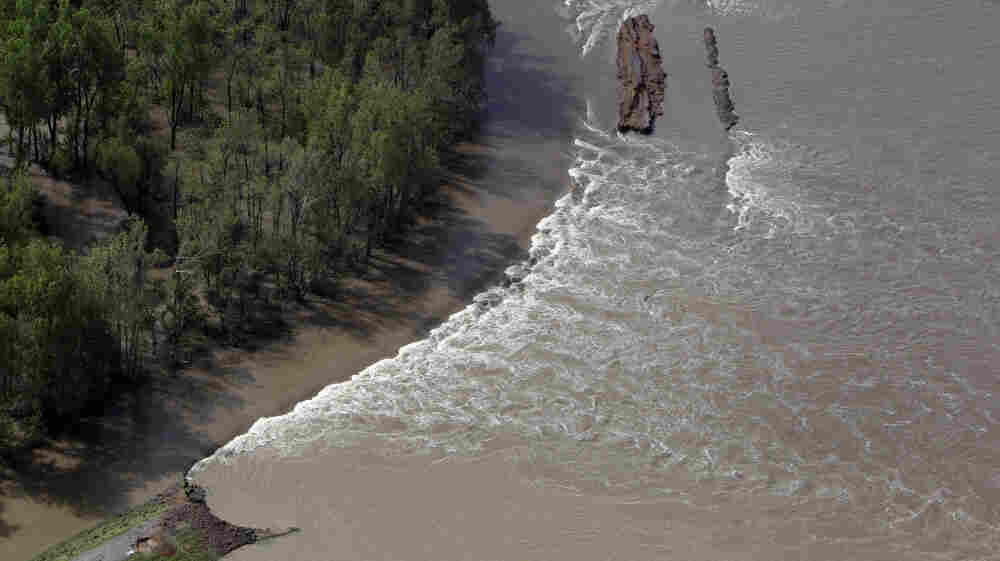 The dramatic, late-night demolition of a levee sent water pouring onto thousands of acres of Missouri farmland Tuesday, easing the Mississippi River floodwaters threatening the tiny Illinois town of Cairo.

But the demolition project did nothing to ease the risk of more trouble downstream, where the mighty river is expected to rise to its highest levels since the 1920s in some parts of Tennessee, Mississippi and Louisiana. Authorities were considering using techniques similar to the Missouri project to divert on oncoming rush of water.

By Tuesday, sunny skies and dry conditions gave residents and government officials their clearest view of the inundation triggered after the Army Corps of Engineers blew a massive hold in the Birds Point levee late Monday.

A staccato series of explosions lit up the night with orange flashes and opened a massive hole in the levee, sending a wall of water onto 200 square miles of corn, soybean and wheat fields. The deluge ruined crop prospects for this year and damaged or destroyed about 100 homes.

Officials said the emergency action diverting water into the designated floodway appears to be working, as river levels started dropping immediately and could be down 4 feet by Saturday.

But the farmers whose crops are being destroyed and whose land will likely be ruined for farming for years to come filed a lawsuit against the Corps, claiming the intentional flooding of their land amounts to the government taking private property without due process in violation of the Fifth Amendment.

"We're bringing suit to assure that we receive fair value for what has been taken by this action," Lester Gooden, who has two farms in Mississippi County, Mo., and is among those bringing the suit, told NPR's Michele Norris. "We're also reorganizing to reclaim this land as soon as the floodwater recede be that one month or a year from now so that we can reclaim our land and our lives and our livelihood."

Travis Williams, 34, a farmer who owns more than 1,000 acres now under water, said his home is safe because it's on "the good side of the levee."

"It's a life-changing event," Williams said. "My heart goes out to all the farmers who lost their land and homes."

At Cairo, which sits precariously at the intersection of the swollen Mississippi and Ohio rivers, preliminary readings suggested the levee project break was doing its job. Hours after the blast, the water level at Cairo was dropping rapidly.

Before the levee was breached, the river stood at 61.72 feet and rising. By Tuesday morning, it had fallen to 60.4 feet and was expected to decline to 59.4 feet by Saturday, easing pressure on the floodwall protecting the town.

But if Cairo seemed to dodge disaster, ominous flooding forecasts were raising alarm from the Missouri Bootheel to near New Orleans.

There were also fresh concerns in western Tennessee, where tributaries have been backed up due to heavy rains and the bulging Mississippi River. In suburban Memphis, some streets were blocked, and some 175 people filled a church gymnasium to await potential record flooding.

This is the highest river in Vicksburg, Miss., since 1927. There will be water coming by here that most people have never seen in their lifetime.

The National Weather Service predicted that up to one-fifth of Dyersburg, Tenn., will be underwater as the North Fork Forked Deer River is expected to crest at 28 feet. Electricity will be restored when the water recedes.

Mark Grant, the 911 Emergency Communicator for the city, said there aren't any estimates on when that will be yet.

"It's a dynamic situation that is changing rapidly," he said. "No one is around that's seen the Mississippi flood like it's been flooding."

Six Boy Scouts became stranded by high water in an Arkansas forest near an area where 20 people died in a flash flood last summer. A National Guard helicopter plucked the boys and two Scoutmasters from the Albert Pike Recreation Area at daybreak Tuesday.

Corps Maj. Gen. Michael Walsh has said he might make use of other downstream "floodways" — giant basins surrounded by levees that can be blown open to divert floodwaters.

Among those that could be tapped are the 58-year-old Morganza floodway near Morgan City, La., and the Bonnet Carre floodway about 30 miles north of New Orleans. The Morganza has been pressed into service just once, in 1973. The Bonnet Carre, which was christened in 1932, has been opened up nine times since 1937, the most recent in 2008.

Officials in Louisiana and Mississippi are warning that the river could bring a surge of water unseen since 1927.

"It's been a long time since we've seen a major flood down the Mississippi River," said George Sills, a former Army Corps engineer and levee expert in Vicksburg, Miss. "This is the highest river in Vicksburg, Miss., since 1927. There will be water coming by here that most people have never seen in their lifetime."

The corps has said about 241 miles of levees along the Mississippi River between Cape Girardeau, Mo., and the Gulf of Mexico need to be made taller or strengthened. The volume of water moving down the river would test the levee system south of Memphis into Louisiana.

Back at the Missouri levee, the blast allowed water to pour into the river basin like a bathtub. Two smaller blasts further south on the levee were scheduled for sometime Tuesday, with goal of allowing some water to escape back into the Mississippi.

The explosions blew a two-mile gap in the levee, sending a great torrent of muddy water into the farm country below. By Tuesday morning, the water had risen to the top of some houses. A tiny village called Pin Hook was completely flooded.

From the air, the vast flooded area resembled a shiny lake, reflecting the sky like an enormous mirror.

Farmers and nearby residents of gathered to survey the scene shortly after dawn. A small cluster of cattle stood grazing on the slope of the levee, and National Guard soldiers patrolled the area.

Billy and Tammy Suggs, who live in the neighboring community of Wyatt, opened the village's tiny town hall so people would have a place to gather when the blast occurred. It was a lot stronger than they expected, knocking out windows in several homes.

"We went around putting boards up to keep the rain out," Billy Suggs said.

NPR's David Schaper and Eleanor Boudreau of member station WKNO contributed to this report, which includes material from The Associated Press