Accessibility links
For 'Bama Students, A Somber, Sudden End Of Classes Almost a week after a massive tornado blitzed across Alabama, people in that state are still trying to figure out a way to move forward. The twister ripped through Tuscaloosa, home to the University of Alabama. Classes and finals have since been canceled.

Listen
For 'Bama Students, A Somber, Sudden End Of Classes 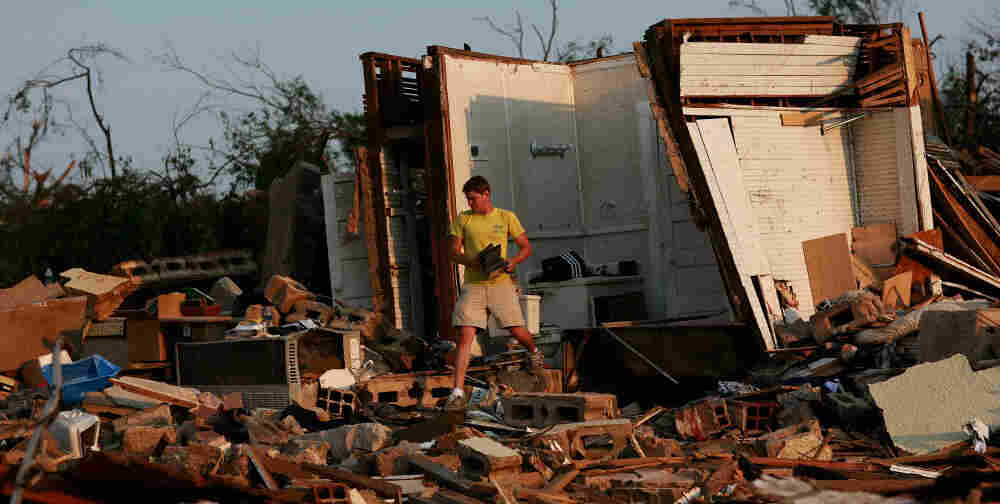 University of Alabama student Clayton Farr gathers his belongings from his destroyed home in Tuscaloosa, Ala. The twisters mostly avoided the main campus, but many students and staff living off campus are dealing with devastation. Tom Pennington/Getty Images hide caption 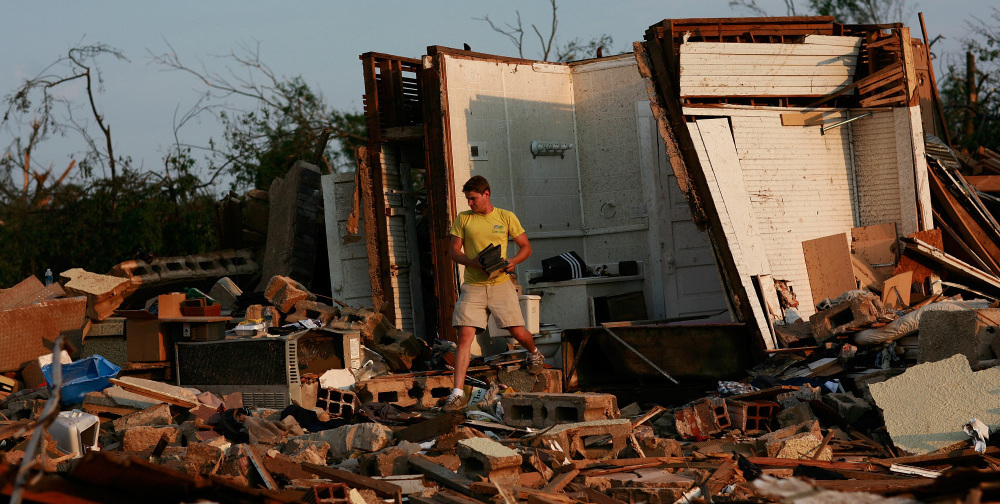 University of Alabama student Clayton Farr gathers his belongings from his destroyed home in Tuscaloosa, Ala. The twisters mostly avoided the main campus, but many students and staff living off campus are dealing with devastation.

Usually, Jerilyn Griffin would be studying for finals at this time of year. Instead she was using a large dolly to pack her things and head home on Monday afternoon.

That was true of many University of Alabama students — if they hadn't already left, they were on their way home, often with their parents' help.

One of last week's devastating tornadoes slammed into Tuscaloosa. While it largely spared the University of Alabama — the campus itself avoided a direct hit — the storm brought the school year to an abrupt end, and emotional scars remain.

Alabama's campus would normally be bustling right now, but it is eerily quiet. The university has roughly 30,000 students. Six have been confirmed dead.

More on the tornadoes

The Long War Against Deadly Tornadoes

On Sunday, Griffin ventured out with a group of friends into some of the worst-hit neighborhoods.

"We aren't going through anybody," she says. "We're just walking in and asking people if they need help."

She just finished her sophomore year, though not in the way she'd expected:

In Tuscaloosa County, at least 45 people have died, and the mayor of Tuscaloosa estimated the damage at as much as $100 million.

The university has ended the school year early and pushed graduation back to August. Many students, staff and professors live in the nearby neighborhoods that were devastated by the storm.

Griffin's mother, Michelle, says she's thankful that the university's campus was spared. She drove her daughter back to Huntsville, Ala., on Monday.

They'll be dealing with more of the same there — Huntsville was also hit hard last week.

"I just want to say thank you God that everybody on the campus is OK. I'm so, so sorry about the losses of those that have died throughout Alabama and Tennessee and throughout the Southern states."

"And Roll Tide!" she adds — it's the famous chant of the university's football team, the Crimson Tide, and has been a rallying cry in this Southern college town for the past week.

The Game Goes On

How they announced us just brought tears to our eyes. People were on their feet, like thousands of people in the stands.

Talaya Owens, member of the track team at the University of Alabama

Talaya Owens is on the university's women's track team, which decided at the last minute to attend a key track meet in Des Moines last weekend.

It was a tough call: Eleven of the team's athletes were displaced. The team didn't do quite as well as they'd hoped — they were tired, stressed out and their flight was so late they barely made the meet. But the thousands gathered cheered them like they were the home team.

"I must have gotten — and I lost count — 20 or 30 hugs as I was trying to get over to Bekah to coach her. The announcer was phenomenal, he put me in tears three times," says Coach Sandy Fowler.

Bekah Hoppis lost her home just days before the meet. Things have been tough for Owens as well. The tornado hit her off-campus home, shattering the windows just as she and a roommate took shelter in a first-floor hallway.

The cheers at the meet eased the pain, and helped her and three teammates win the 4x100 hurdles.

"It was amazing to just know that these people was worried so much about us, you know, little old Tuscaloosa, in Alabama," Owens says. "And how they announced us just brought tears to our eyes. People were on their feet, like thousands of people in the stands."

The team got some good news Monday afternoon: Even though the campus is shutting down, the track team's season will continue. The university has decided that the sports seasons won't end early because of this tragedy.